If Palestinians were given a larger platform, “people would have to confront the reality of supporting an apartheid regime,” said Ahmad Abuznaid. 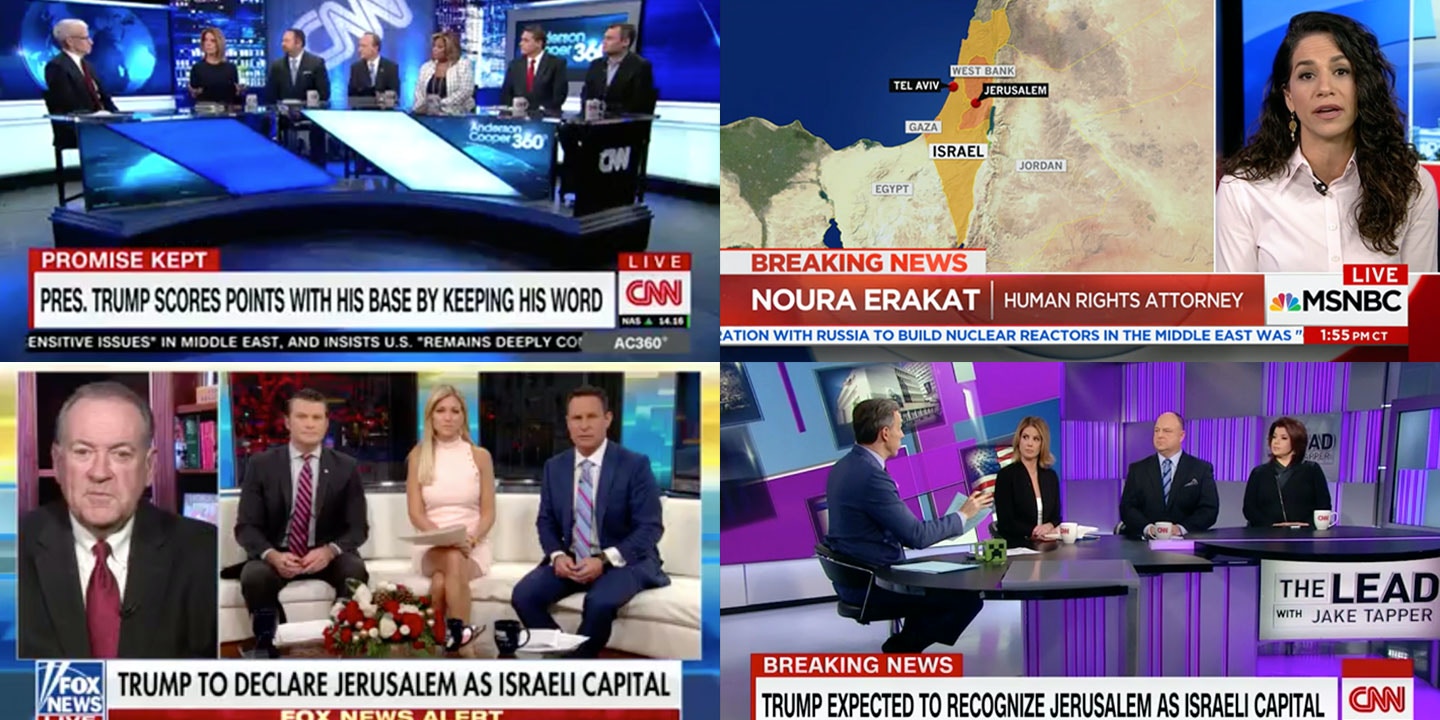 Palestinian voices were largely absent from American cable news’ coverage of President Donald Trump’s decision last week to recognize Jerusalem as the capital of Israel. By turning to their stable of regular political commentators to weigh in on the unprecedented move, the three major news networks – CNN, MSNBC, and Fox News – excluded those most impacted by the decision and avoided difficult questions about Israeli rights abuses, Palestinian human rights lawyers and activists say.

Had more Palestinians been asked to weigh in, they would have “highlighted the broader context that this is a fulfillment of decades-long policy of removing [Palestinians],” said human rights lawyer Noura Erakat. Instead, the network coverage had the cumulative effect of framing the move as a bad policy decision, when in reality it is an extension of longstanding U.S. policy, added Erakat, who was one of a handful of Palestinians to appear on MSNBC last week.

“Nobody wants to admit that we are witnessing the inevitable consolidation of Israel’s settler colonialism and apartheid regime,” she added. The networks began to heavily report on the issue about a week before Trump’s December 6 announcement that the United States would recognize Jerusalem – which is revered by Christians, Jews, and Muslims alike – as Israel’s capital and move the U.S. Embassy from Tel Aviv. Between December 1 and December 6, Fox News did not interview a single Palestinian about the consequences of the decision, and CNN interviewed just four. MSNBC outperformed its competition in terms of featuring Arab-American guests, with Arab-American reporter Ayman Mohyeldin on the ground in East Jerusalem and the Palestinian territories, and Erakat and other guests of Arab descent being invited to speak.

Israel captured East Jerusalem in 1967 and later annexed it, an action that has not been recognized internationally. In fact, Israel has long recognized Jerusalem as its capital, despite international law that states that an occupying power has no sovereignty in the territory it occupies. While the Palestinian Authority issues ID cards for residents of the West Bank and Gaza, Israel maintains the right to issue — and revoke — ID cards for Jerusalem residents. Palestinians living in Jerusalem are also subject to Israeli law and face various forms of discrimination. In that sense, Trump’s decision makes no substantial changes on the ground and essentially serves as an extension of the Oslo Accords and the United States’s policies toward Israel and occupied Palestine, critics say.

“The occupation and consistent colonization and erasure of Palestinian existence on the ground is inherently violent,” said Ahmad Abuznaid, Jerusalem native and director of the Dearborn-based National Network for Arab American Communities. “If there was more representation of Palestinians in mainstream media, people would have to confront the reality of supporting an apartheid regime.”

Mainstream outlets have normalized the Israeli occupation, Erakat argued, and, as a result, condemnations of Israel’s actions are rare. “No matter what [Israel] does, it becomes stuffed into a sovereignty framework,” she said.

Indeed, last week’s network coverage of Jerusalem focused on an end to the Middle East peace process, and conversations rarely touched on Israel’s building of illegal settlements throughout Jerusalem. Since 1967, Israel established more than 200 settlements in the West Bank and East Jerusalem, according to B’Tselem, the Israeli Information Center for Human Rights in the Occupied Territories. A 2016 comptroller report found that about 15 percent of building permits in East Jerusalem were issued to Palestinians. Rather than focusing on occupation as a form of violence, the networks instead anticipated reactive violence from the Palestinians, something that did not materialize.

Deek said Israel’s violence and the United States’s support for it is the issue of primary concern in the region. However, unlike Palestine, Deek said, Israel enjoys media exceptionalism that serves to demonize Palestinians and justify Israel’s continued colonization of Palestinian territories. Hamas’s transgressions and individual incidents of Palestinian violence, for example, were disproportionately covered in comparison to Israeli aggression during the 2014 Gaza war.

At one point, CNN’s Erin Burnett seemed almost self-aware about the lack of Palestinian voices on the network. In an interview with Israeli Ambassador to the U.S. Ron Dermer, he claimed that recognizing Jerusalem as Israel’s capital “lays a foundation of peace because it is based on truth and fact.”

She replied, “Obviously not the view of Palestinians today, but we’ll see what happens.”

On CNN: A diverse panel of 5 white people weighing in on Trump's recognition of Jerusalem as Israel's capital. No Palestinians on the panel, even as this move directly impacts them. pic.twitter.com/qf3nSU2kBe

Fox News did not interview a single Palestinian for its segments, but the network did play a pre-recorded clip of Palestinian negotiator Hanan Ashrawi. When former Arkansas Republican Gov. Mike Huckabee weighed in on Fox, he said he hopes the next time he visits Jerusalem there will be an American embassy there.

MSNBC’s Mohyeldin has extensive experience in the region and traveled to Jerusalem to cover the implications of Trump’s decision there, including in an interview with former Israeli Prime Minister Ehud Barak. Throughout the week, MSNBC hosts interviewed people like Jim Zogby, head of the Washington-based Arab American Institute; Rula Jebreal, a Palestinian journalist; and Erakat.

Like the other networks, much of MSNBC’s coverage featured pundits who are regular contributors to the network. That so few of them are of Arab or Palestinian descent speaks to a general lack of diversity in the mainstream media.

Had Palestinians been included in the national conversation about Jerusalem, the tenor would have been quite different, Abuznaid said. For example, the networks emphasized the imperiled feature of the Middle East peace process, but many Palestinians do not believe in the existence of the process, he said, due to Israeli transgressions and U.S. support for them. Last year alone, the United States signed its largest-ever military aid package, agreeing to give Israel $38 billion over the next decade. The United States has also done little more than verbally condemn Israel for its consistent and repeated violations of international law, such as its settlement expansions, which, alongside the status of Jerusalem, is a core issue at the heart of the peace process.

“Jerusalem is a microcosm of what the Palestinian-Israeli conflict has developed out of and now we’re at the heart of the discussion,” Abuznaid said. “The two-state solution has been effectively eliminated publicly. … We can now deal with the reality that the U.S. is not a neutral broker and the fact that the two-state solution is dead.”