The GOP could lose its 17-year majority in the Virginia House of Delegates by a single vote. Does every vote count? Ask Democrat Shelly Simonds, who won a seat in the Virginia House of Delegates by a single vote in unofficial results on Tuesday, an upset that would end the GOP’s 17-year majority if it stands. Simonds emerged from a daylong recount as the winner, seizing the seat in Virginia’s 94th House District from Republican incumbent David Yancey by just one vote: 11,608 to 11,607.

A panel of three judges, appointed by the Virginia Supreme Court, met to certify the results Wednesday, but Democrats had already claimed victory, with Simonds’s seat leading to a 50-50 tie in the chamber. Before last month, Republicans controlled 66 out of 100 seats. Now, with an evenly split House, any legislation without 51 votes would not advance.

Virginia Republicans conceded defeat Tuesday evening, but on Wednesday, the trailing GOP candidate challenged one final ballot, arguing that it should be counted for him.

BREAKING: @yancey4delegate is challenging a single ballot that was not counted during recount.
Court is in recess debating whether to look at it.
No phones allowed in there so expect slow updates.
Running back in there now. ??

And later on Wednesday, the judges sided with Yancey, ruling that the vote should be counted in his column — leading to a tie.

That recount that flipped a Virginia House of Delegates seat yesterday to the Ds to create a 50-50 legislative split? Not so much. A three-judge panel found another vote for the R, and now that race is tied. They will now draw lots. @washingtonpost story soon.

That single decisive vote in the Newport News, Virginia, district could help Democrats with their long-term goal of passing Medicaid expansion in the state next year. “We are one vote closer to expanding Medicaid and extending access to affordable health care to nearly 400,000 people,” Virginia House Democratic leader David Toscano said in a statement. “Let’s get this done.”

BREAKING: We obtained the actual ballot submitted to the court.
Dissect away.https://t.co/cQneTM0tUk pic.twitter.com/Eeq4mEOtd9

The GOP maintains control of the state Senate by a narrow 21-to-19 margin. Still, come next year, Democratic Lt. Gov.-elect Justin Fairfax will be the one to break ties in the Senate, and Democratic Gov.-elect Ralph Northam will have veto power, making a bipartisan agenda more likely.

Simonds, in a statement, thanked voters for making history. “Whether it was knocking on doors, posting on social media or donating a few dollars. It all made a difference and added up to an amazing outcome on election day,” she said, before the judges un-made history hours later. 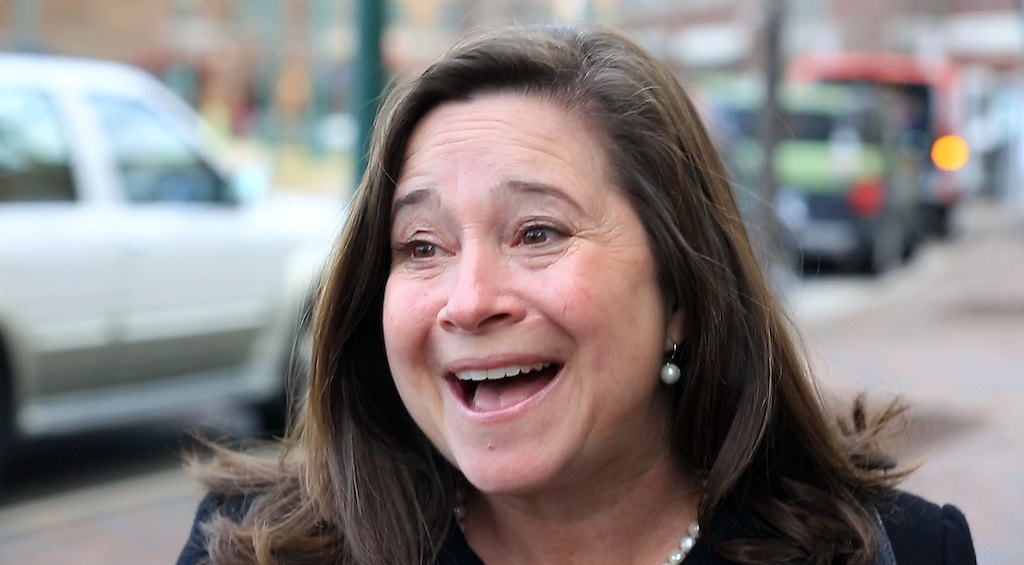 Democrat Shelly Simonds reacts to the news that she won the 94th District precincts by one vote after previously trailing incumbent David Yancey by 10 votes post-election, following a recount Dec. 19, 2017, in Hampton, Va.

The unofficial one-vote win had led to an outpouring of celebration. “Every vote matters — congratulations Shelly Simonds. Looking forward to partnering with you to make life better for every Virginian, no matter who you are, no matter where you live,” Northam tweeted.

Every vote matters—congratulations @shelly_simonds. Looking forward to partnering with you to make life better for every Virginian, no matter who you are, no matter where you live. https://t.co/USiIVFTphm

Yancey had a lead of 10 votes before the recount. Last month, Virginia elected its first openly transgender state lawmaker, Danica Roem, along with a Democratic Socialists of America-backed candidate, and the first two Latinas elected to the state’s House of Delegates.

Incredible win for @shelly_simonds, the next Delegate for #HD94. Determines control of the House. First time GOP hasn't won a majority since the 1990s. Virginia's progressive path continues! https://t.co/t5cRdb5Yj1

This story is being updated as the vote count and certification unfolds.

Top photo: Election officials in Newport News, Va., examine ballots that a computer failed to scan during a recount for a House of Delegates race on Tuesday, Dec. 19, 2017.