Hispanic lawmakers marched across the Capitol, demanded a meeting with Chuck Schumer, got it, then lost the vote anyway. 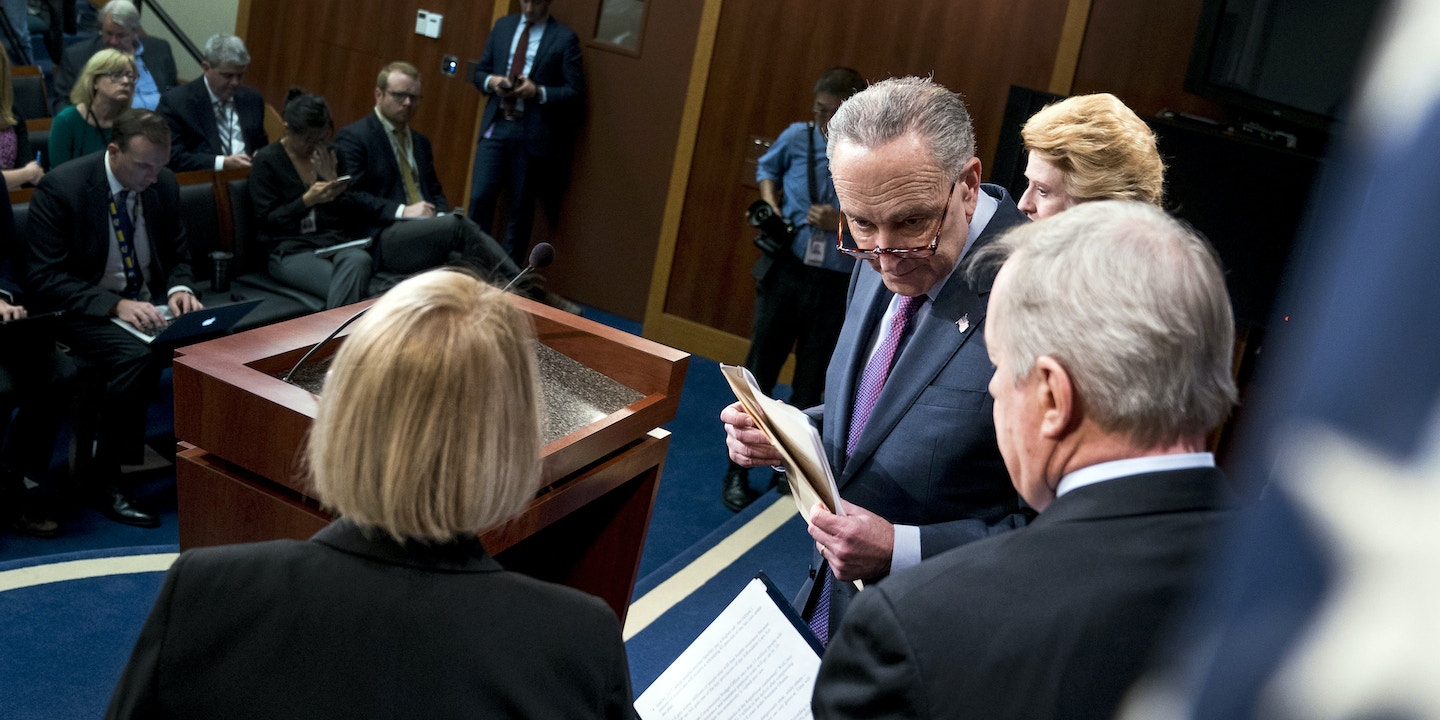 Congressional Hispanic Caucus members marched across the Capitol Thursday to Chuck Schumer’s office, demanding a meeting with the Senate minority leader. The lawmakers wanted Schumer, D-N.Y., to rally his caucus to vote against the short-term spending bill because it didn’t include a promised legislative fix for DACA recipients.

CHC member Rep. Luis Gutiérrez, D-Ill., said the caucus voted unanimously to march over to Schumer’s office for a meeting intended to galvanize support for DREAMers. Gutiérrez and Chairwoman Michelle Lujan Grisham, D-N.M., said they received a commitment from Schumer that additional Senate Democrats will vote against the CR but did not specify how many.

Gutiérrez said the Hispanic members wanted to make clear that they oppose the current CR because of their support for the expired Children’s Health Insurance Program, reproductive rights, veterans, and Puerto Rico, but also of DREAMers and Congress should “not separate them as a core group of people,” because “we’re not going to give up until we reach the goal.”

There are 48 members of the Democratic caucus, and just 41 of them were needed to block the measure, given Senate rules. But on Thursday evening, they fell nine short, with the bill advancing 66-32. A full 17 Democrats voted for the spending bill, including Sen. Tim Kaine, D-Va., the 2016 vice presidential nominee. (The full list is below.)

That means the next fight over a government shutdown will come in the middle of January, as the funding bill keeps the government open until the 19th.

Rep. Raul Grijalva, D-Ariz., said the meeting with Schumer resulted in the expectation that a “significant group” of Democratic senators would oppose the CR, though he didn’t know if it would be enough to stop the bill.

“We were very clear: Don’t throw our dreamers under the bus,” Gutiérrez told reporters after the hour-long meeting. “Did I use that expression? Absolutely, I used that expression. I can’t be any clearer about the message that we took to the leader. He said he’s with them, he says he’s going down fighting with them and that he’s going to do everything he can.”

The spending bill, at a cost of $2.8 billion, extended CHIP for a mere three months, while a five-year extension that was also on the table would cost just $8 billion.

DREAMers face deportation after President Donald Trump in early September rescinded former President Barack Obama’s 2012 administrative program, which gave an estimated 700,000 young people renewable two-year protection against deportation and work permit eligibility. Trump ordered the program to be phased out by March 5 but each day Congress fails to act, an estimated 122 DACA recipients lose status, according to the Center for American Progress.

DREAMers and allies have routinely protested on Capitol Hill in recent months, staging marches, sit-ins, taking over Senate buildings, and facing arrest in their fight for a clean DREAM Act – including on Thursday when protesters shut down the Dirksen Senate cafeteria with a sit-in.

Mañana, that’s one word lawmakers seem to repeat, Gutiérrez said. “We’re really tired of tomorrow and why should we expect that if we come back in January they’re not going to give us another reason…part of being here 25 years is – I’ve seen this movie before and the ending isn’t good when it comes to immigrants.”

“The House Democrats are standing tall,” he said. “We need our partners in the Senate to follow and stand just as tall as we are for our DREAMers.”

Republicans Rand Paul of Kentucky and Mike Lee of Utah voted no.