The biggest free speech fight in the country is over Palestine activism — and these students took their battle to court. A court convened Wednesday afternoon to hear the case of students at Fordham University who are suing the school, which had denied them the ability to form an official student club in December 2016. The petitioning students, Ahmad Awad, Sofia Dadap, Sapphira Lurie, and Julie Norris, who are represented by the Center for Constitutional Rights and Palestine Legal, had tried to form a club on one of the most contentious political issues on campus: the Israeli-Palestinian conflict.

The fight over forming a Students for Justice in Palestine chapter had dragged on for more than two years. Students had applied to establish SJP at the Lincoln Center Campus in November 2015, but administrators had resisted from the beginning. The students were asking the court to uphold Fordham’s own policies and mission, and to reinstate the United Student Government’s vote in support of establishing the chapter.

Awad, a Palestinian-American, believes that the school’s rejection of SJP sets a dangerous precedent.

“SJP was going to allow a different perspective on campus,” said Awad, now a law student at Rutgers University. “Allowing SJP [would] allow Fordham to continue a standard of free speech and uphold its mission statement” — alluding to a passage in the school’s mission about “the alleviation of poverty, the promotion of justice, the protection of human rights.”

Much of the debate around admitting the club has focused on SJP’s support for the Boycott, Divestment, Sanctions movement, a nonviolent global campaign to pressure Israel to end its abuses of Palestinians’ rights, which has been met with controversy by Israeli political leaders and pro-Israel figures in the U.S. The fight over BDS has become a national one; state-level legislative bodies, Congress, civil rights groups, and, of course, pro-Israel advocacy groups are all heavily involved. But in no place does the fight seem to be as heated as on college campuses.

On Wednesday, the court broke without rendering a judgment, and it’s unclear when one will come. The case continues to loom as another data point in the campaign to suppress Palestine activism on campus — a campaign with successes that dispirit and confound observers who favor open debates and Palestinian rights.

“College campuses are where people are supposed to be exposed to new ideas,” said Rashid Khalidi, a Palestinian-American professor and co-director of the Center for Palestine Studies at Columbia University. “There is absolutely no reason why the policies of a country that is engaged in the longest occupation in modern history, which is entirely dependent on the support of the United States, should not be discussed openly and critically in the United States.” 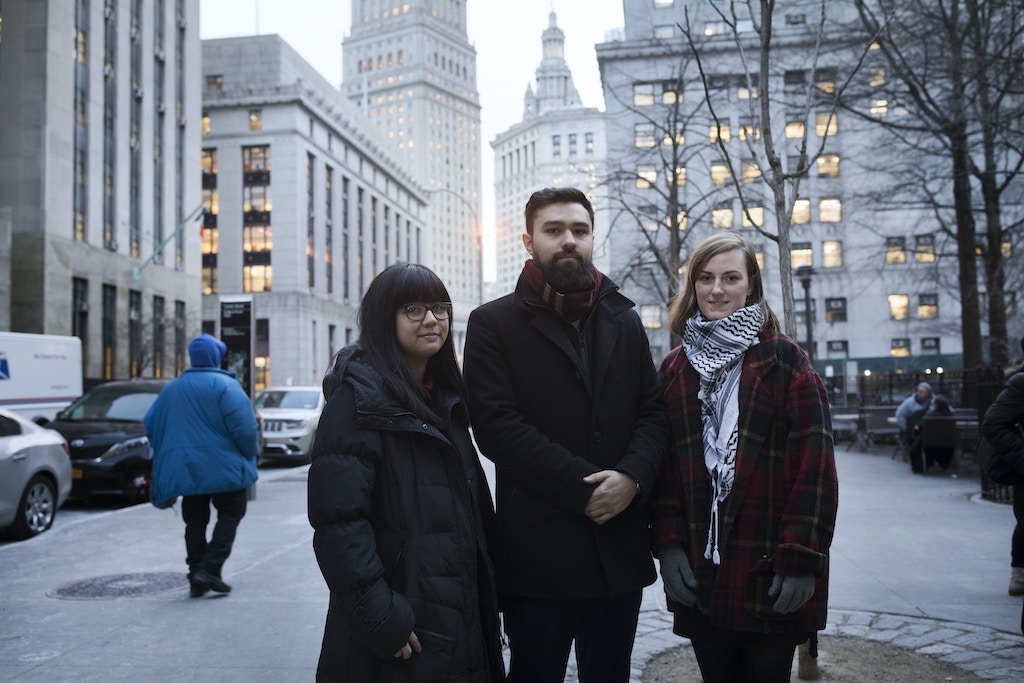 Fordham University students Sofia Dadap, Ahmad Awad, and Julie Norris outside the Manhattan Civil Courthouse in New York City, on Jan. 3, 2018. They have filed a case against the university in an ongoing effort to have their club, Students for Justice in Palestine, recognized.

Photo: Virginia Lozano for The Intercept

The SJP students’ journey has been filled with strange lines of inquiry from the administration, as well as requirements that were not asked of other applicants trying to form student clubs.

In the 13 months between the application and the denial issued by the Dean of Students, the students had been called to several meetings and corresponded with Fordham University administrators regarding various matters, including the content of their constitution, whether the National Students for Justice in Palestine organization required anything from them, and proposed programming, according to Palestine Legal. (I was involved with SJP’s Rutgers University chapter while attending school there.)

During one of those meetings, the students were asked about their thoughts on BDS and if it called for the dissolution of Israel. They were queried about why they use the term “apartheid.” And administrators prodded them on whether they were supportive of or open to working with Jewish groups. In a move that dangerously and falsely conflates criticisms of Israel with anti-Semitism, Fordham University administrators called on the Jewish Student Organization to weigh in on granting SJP club status. Students were also asked to seek a vote of approval from the United Student Government, even though the requirement was not clearly university policy at the time: Students organizing the SJP club were working from a packet which did not list the requirement, and were later furnished with a revised packet that required the vote and gave the dean of students veto power. The student government nonetheless voted that the club should be admitted.

Yet the school rejected the application. The Israeli-Palestinian conflict “is a topic that often leads to polarization rather than dialogue. The purpose of the organization as stated in the proposed club constitution points toward that polarization,” wrote Keith Eldredge, the dean of students at Fordham’s Lincoln Center Campus, in a letter to the students in December 2016. “Specifically, the call for Boycott, Divestment, and Sanctions of Israel presents a barrier to open dialogue and mutual understanding and learning.” It was the first time that Fordham denied a student club application that had been approved by the student government, according to Palestine Legal, and no recourse was given to appeal the decision.

At Wednesday’s hearing, Fordham’s lawyers stated that because the university is a private entity, the First Amendment doesn’t apply, and students’ free speech can be arbitrarily restricted.

“The question is who defines whether certain speech has crossed the line of racist incitement or not,” said Omar Barghouti, a Palestine-based activist who co-founded the BDS movement, in an interview. “This is not about feeling ‘uncomfortable’ about speech that you despise or viscerally disagree with.” Barghouti went on to say that the opposition to the club “devalues the lives of oppressed and marginalized groups that already suffer institutional racism and discrimination in the current hegemonic culture, thus exposing them to palpable physical harm and further intimidation.”

Khalidi, the Columbia professor, said that Fordham’s actions are an “egregious violation of free speech and academic freedom.”

“This constitutes an unwarranted interference by the university in student life,” Khalidi said. “There’s an overwhelming political and media consensus in support of Israel in the United States. People who would like to put forward a critical point of view on college campuses should be allowed to do so.” 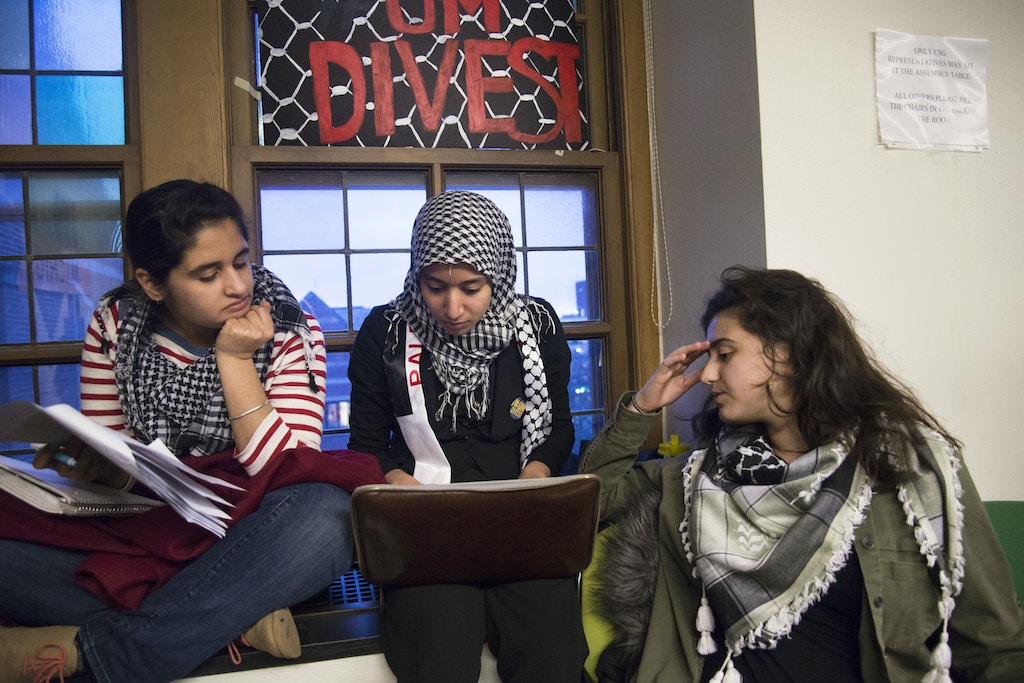 University of Michigan students, Tahany Alsabahi, center, and Sumeyye Korkaya, right, participate in a sit-in to divest from companies that have supported human rights violations against Palestinians, on March 20, 2014.

The flaps over campus advocacy for Palestinian rights frequently stem from the BDS movement, which was modeled on grassroots opposition to the South African apartheid. Despite its nonviolent foundation, BDS has been met with a torrent of activism that has led 23 states to enact anti-BDS legislation, including New York. Many of the state-level laws, critics say, risk chilling dissent even if they don’t criminalize it. In some cases, however, civil liberties groups have raised stronger objections. Last summer, the American Civil Liberties Union opposed a bill introduced in both houses of Congress for potentially criminalizing a boycott activity against Israel. Later in 2017, the group filed a lawsuit against Kansas over an anti-BDS law it said also violated the Constitution.

Those same fights have played out on college campuses large and small, public and private alike. The controversies often emerge around Students for Justice in Palestine, a national group founded in 2010 that has grown to roughly 200 school chapters.

Students at the University of Michigan have lobbied their student government 11 times since 2002 to divest from companies that enable Israel’s occupation of Palestinian lands. Last November, the student government finally accepted a motion pushing divestment after an approximately seven-hour hearing. Following the vote, however, the school released a statement that it was unlikely to heed the student government and would continue investing as normal.

Last semester at Brooklyn College, professors and students, some of whom had already graduated, found their names listed as “terrorist supporters” on posters around campus. The posters were sponsored by the David Horowitz Freedom Center, a far-right group known for its anti-Muslim animus. Of the two professors and nine current and former students who were listed on the posters, many had been active members or supportive of Brooklyn College’s SJP chapter, which has advocated for BDS, among other social justice movements.

“It is quite transparently an attempt to intimidate faculty and produce a certain kind of chilling effect,” said Samir Chopra, a professor of philosophy at Brooklyn College whose name was also listed on the posters. Chopra, who does not entirely support the BDS movement but believes its advocacy falls within students’ rights to free speech, cited the other forms of intimidation used against students, such as blacklists generated by pro-Israel groups. “Many of these things can be professional death,” Chopra said. “I quite honestly think that if I were to go out looking for a job, I would not find a job right now.”

Although Brooklyn College’s president condemned the poster campaign, some students recalled that the administration was less than fully supportive. “Every single time we had an event, every time we tried to do anything, there was so much backlash,” said Thomas DeAngelis, a former Brooklyn College student who was listed on the posters despite moving on to the University of Minnesota for graduate school.

DeAngelis said that administrators regularly required metal detectors and security guards for SJP events. With the exception of certain events held by the Caribbean student clubs, this wasn’t the experience of other student clubs, according to DeAngelis. SJP students at other universities, including DePaul University and the University of New Mexico, echoed DeAngelis’s testimony, saying that administrators often required their SJP chapters to post security guards at events. Brooklyn College doesn’t outright prevent students from organizing, DeAngelis said, but by constantly throwing hurdles at organizers and not protecting them from harassment, Brooklyn College creates an added anxiety for activists, making it impossible for SJP to fully function.

“They never canceled our events, but they would make us go through crazy loopholes and come up with new rules based on something SJP did — like what type of things are appropriate at events and what material could be distributed,” DeAngelis said. “People got fed up and it pushed a lot of people to do work outside of SJP.”

Update: Jan. 8, 2018
This post was updated to clarify that a student government vote was not a written requirement at the time that Fordham students launched their efforts to establish a club. The requirement was added to a subsequent version of an application packet furnished to the students by the school administration.

Top photo: Ahmad Awad, after his hearing against Fordham University at the Manhattan Civil Courthouse in New York City, on Jan. 3, 2018.