Martin Luther King Jr. Spent the Last Year of His Life Detested by the Liberal Establishment

Martin Luther King Jr. was much more radical than he is often portrayed. 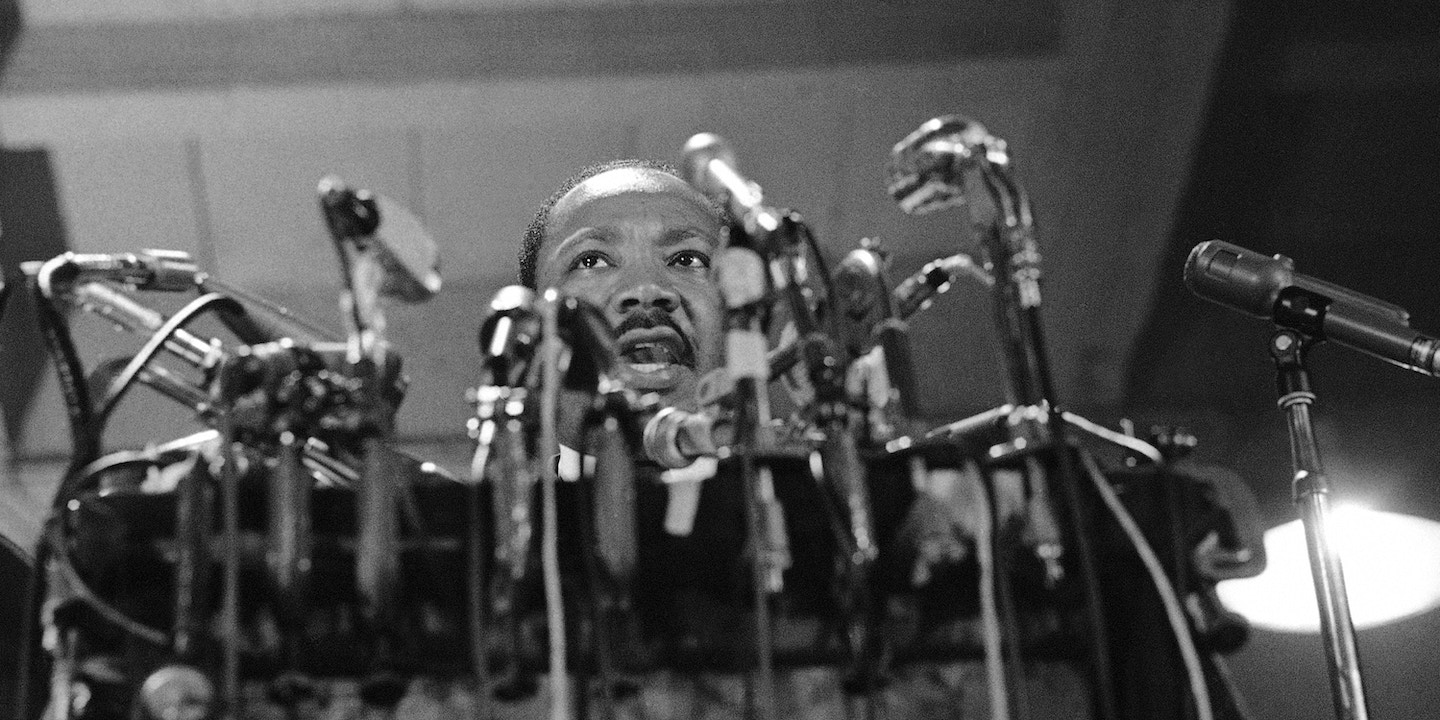 In 1999, the polling agency Gallup set out to determine the individuals Americans most admired in the 20th century.

Mother Teresa came in first, with 49 percent of Americans putting her at the top; the Rev. Dr. Martin Luther King Jr., ranked second, with 34 percent placing him on the same list. But, the polling agency would later write, “King was far from universally revered during his lifetime.” They noted that in 1966, 63 percent of Americans held a negative view of the civil rights leader, while just 32 percent held a positive one. This was a marked reversal from five years earlier, when 41 percent of Americans gave King a positive rating and 37 percent a negative one.

King’s slide in popularity coincided with his activism taking a turn from what Americans largely know him for — his campaign for civil rights in the American South — to a much more radical one aimed at the war in Vietnam and poverty.

For years, King had been troubled by the war in Vietnam and raised it privately in conversations with the Democratic President Lyndon Johnson. As the conflict dragged on, King felt he had no choice but to publicly denounce the war.

“This business of burning human beings with napalm, of filling our nation’s homes with orphans and widows, of injecting poisonous drugs of hate into the veins of peoples normally humane, of sending men home from dark and bloody battlefields physically handicapped and psychologically deranged, cannot be reconciled with wisdom, justice, and love,” he warned. “A nation that continues year after year to spend more money on military defense than on programs of social uplift is approaching spiritual death.”

Many in King’s inner circle warned against making the speech and publicly campaigning against the war. Their argument was that Johnson had risked his neck for the African-American community on issues like civil rights, health care, and welfare, and publicly condemning his foreign policy would irreparably harm the relationship between black activists and the president.

“We are called to speak for the weak, for the voiceless, for the victims of our nation, for those it calls ‘enemy,’ for no document from human hands can make these humans any less our brothers.”

King reserved a section of his remarks to address these critics. He labeled the war an “enemy of the poor,” saying that its budget was draining anti-poverty programs; he also pointed out that it was hypocritical for him to preach nonviolence to activists at home, while watching his government reject that principle abroad. But ultimately his stance came from personal moral conviction and his devoted Christian beliefs. “Beyond the calling of race or nation or creed is this vocation of sonship and brotherhood. Because I believe that the Father is deeply concerned, especially for His suffering and helpless and outcast children, I come tonight to speak for them,” he said. “This I believe to be the privilege and the burden of all of us who deem ourselves bound by allegiances and loyalties, which are broader and deeper than nationalism and which go beyond our nation’s self-defined goals and positions. We are called to speak for the weak, for the voiceless, for the victims of our nation, for those it calls ‘enemy,’ for no document from human hands can make these humans any less our brothers.” 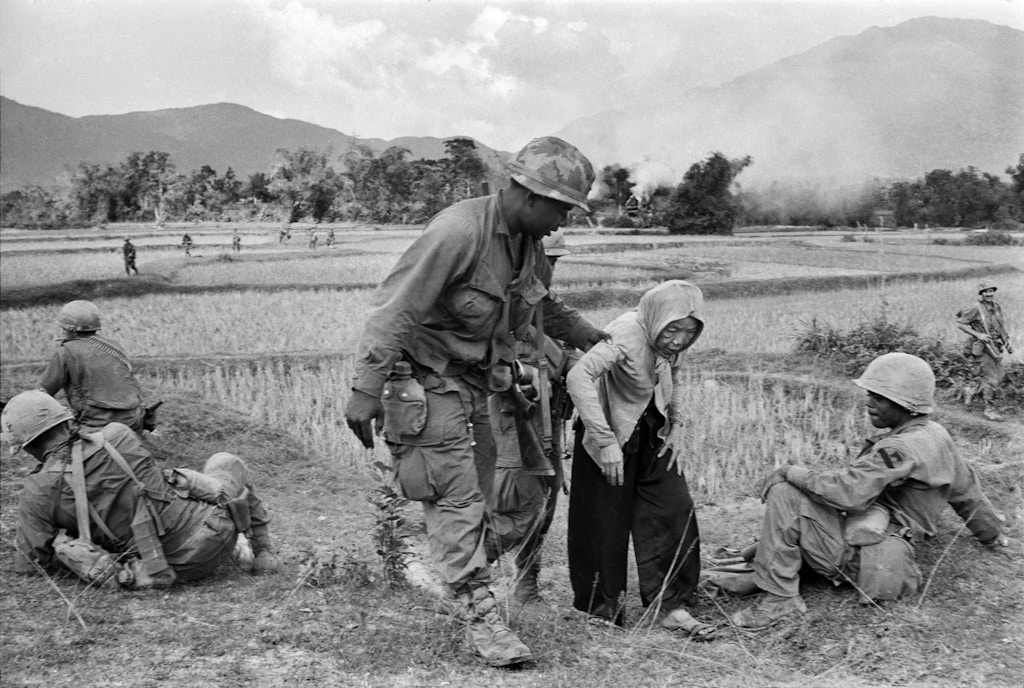 A U.S. air cavalryman lends a helping hand to an aged Vietnamese woman who grew tired as she and her neighbors were being resettled from their village to a refugee camp, Jan. 5, 1968.

The backlash from a liberal establishment that had once praised King for his civil rights campaign came as hard and fast as his allies had feared.

The New York Times editorial board lambasted King for linking the war in Vietnam to the struggles of civil rights and poverty alleviation in the United States, saying it was “too facile a connection” and that he was doing a “disservice” to both causes. It concluded that there “are no simple answers to the war in Vietnam or to racial injustice in this country.” The Washington Post editorial board said King had “diminished his usefulness to his cause, his country and his people.” A political cartoon in the Kansas City Star depicted the civil rights movement as a young black girl crying and begging for her drunk father King, who is consuming the contents of a bottle labeled “Anti-Vietnam.”

The African-American establishment, fearful of Johnson’s reaction, also distanced itself from King.

The NAACP under the leadership of Roy Wilkins refused to oppose the war and explicitly condemned the effort to link the peace and civil rights movements. Whitney Young, the leader of the National Urban League, warned that “Johnson needs a consensus. If we are not with him on Vietnam, then he is not going to be with us on civil rights.” Jackie Robinson, the celebrated African-American baseball player and civil rights advocate, wrote to Johnson two weeks after King’s speech to distance himself from the civil rights leader: “While I am certain your faith has been shaken by demonstrations against the Viet Nam war, I hope the actions of any one individual does not make you feel as Vice President Humphrey does, that Dr. King’s stand will hurt the civil rights movement. It would not be fair to the thousands of our Negro fighting men who are giving their lives because they believe, in most instances, that our Viet Nam stand is just.” Many donors to the Southern Christian Leadership Conference wrote to King announcing they were pulling their support. 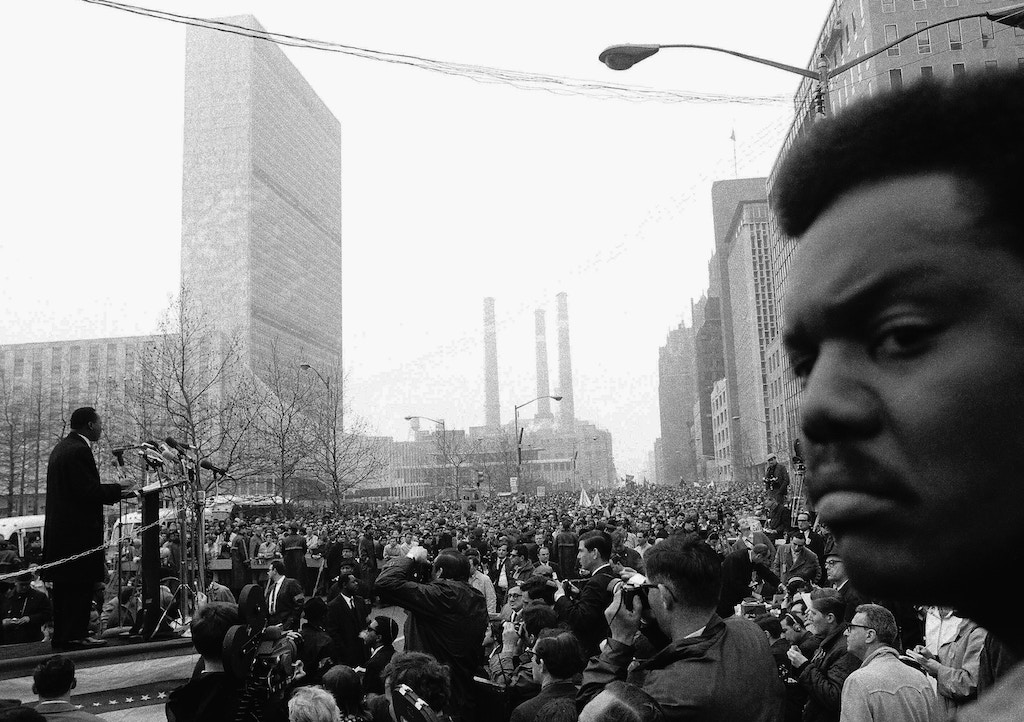 Tolerance for Civil Disobedience Ends at the Mason-Dixon Line

As he alienated the liberal establishment for his campaign against the Vietnam War, King also planned to mobilize mass demonstrations and civil disobedience aimed not at his old foes in the segregationist South, but politicians north of the Mason Dixon line who he believed were failing to act to stop endemic poverty. In August 1967, he told the SCLC that he was calling for activists to “dislocate” northern cities with nonviolent civil disobedience campaigns demanding action on federal aid. He said he would consider tactics, such as school boycotts, blocking plant gates with unemployed African-Americans, and mass sit-ins in federal buildings.

The New York Times, a steady ally of King’s civil disobedience campaign in the South, was furious. Two days after King’s SCLC address, the editorial board called his idea a “formula for discord.” The paper complained that there is an “inherent contradiction in Dr. King’s summons to Negroes to act ‘peacefully but forcefully to cripple the operations of an oppressive society.’ He himself has acknowledged that nonviolence is losing its appeal; once the spark of massive law-defiance is applied in the present overheated atmosphere, the potential for disaster becomes overwhelming.”

But King was never an advocate for violence. Although some on the left in King’s time and today argue about the utility of violence, King spent much of the end of his life trying to prevent the rioting and violent unrest that the Times was so concerned about. In February 1968, he warned during a tour through Alabama that increased rioting could lead to a “right-wing takeover.” He pointed to segregationist George Wallace’s presidential bid, saying, “Every time a riot develops, it helps George Wallace.” Defending his threat to take poverty protests to the doorsteps of the Democratic and Republican National Conventions, he portrayed nonviolence as a sort of middle path between acquiescence and violence. “We need an alternative to riots and to timid supplication,” he said.

Also that year, he launched the Poor People’s Campaign, aimed at providing good jobs, housing, and a decent standard of living to all Americans. More than 40 years before American protesters took to the streets of New York City and other locales to “occupy” space to protest inequality, King proposed a massive tent encampment in Washington, D.C. to demand action on poverty. King was assassinated during a campaign to organize sanitation workers in Tennessee in April of that year, before he was able to set up the encampment. His widow Coretta Scott King, as well as fellow civil rights leader Ralph David Abernathy, went ahead with the plan to create what they called Resurrection City.

The camp lasted six weeks until police moved in to shut it down and evict all of its inhabitants, pointing to sporadic acts of hooliganism as justification. Andrew Young, the young civil rights leader who later went on to be Jimmy Carter’s U.N. ambassador and a mayor of Atlanta, was horrified, saying the crushing of the camp was worse than the police violence he saw in the South. “It was worse than anything I saw in Mississippi or Alabama,” he said. “You don’t shoot tear gas into an entire city because two or three hooligans are throwing rocks.”

Following King’s assassination, the mood shifted quickly. Johnson, who had once terminated all communication with King and privately cursed his name, issued a statement saying the “heart of America is heavy, the spirit of America weeps” following the activist’s death. Georgia’s segregationist Gov. Lester Maddox, a frequent critic of King, even begrudgingly allowed Georgia’s flag to fly at half mast following his death. Bobby Kennedy, who once authorized the wiretaps of King’s phones, attended the funeral.

“He gave his life for the poor of the world — the garbage workers of Memphis and the peasants of Vietnam.”

Coretta Scott King’s greatest concern was not for her husband’s image, but how his legacy would be carried on after his death. Rioting rocked major American cities following King’s assassination, and she feared that the nonviolence he had preached would be lost in the embers.

The Sunday following the assassination, she spoke at Ebenezer Baptist Church in Atlanta and implored his movement to continue to act as he would for the causes he believed in:

Our concern now is that his work does not die. He gave his life for the poor of the world — the garbage workers of Memphis and the peasants of Vietnam. Nothing could hurt him more than that man could attempt no way to solve problems except through violence. He gave his life in search of a more excellent way, a more effective way, a creative way rather than a destructive way.

We intend to go on in search of that way, and I hope that you who loved and admired him would join us in fulfilling his dream.

The day that Negro people and others in bondage are truly free, on the day want is abolished, on the day wars are no more, on that day I know my husband well rest in a long-deserved peace.

Top photo: Dr. Martin Luther King, head of the Southern Christian Leadership Conference, delivers his speech that opened the National Conference for New Politico Convention in Chicago, Sept. 1, 1967. King, facing a battery of microphones, called for an end of the Vietnam fighting.