The education secretary promised a return to the “rule of law” and lambasted the Obama administration before a group of Federalist Society members. 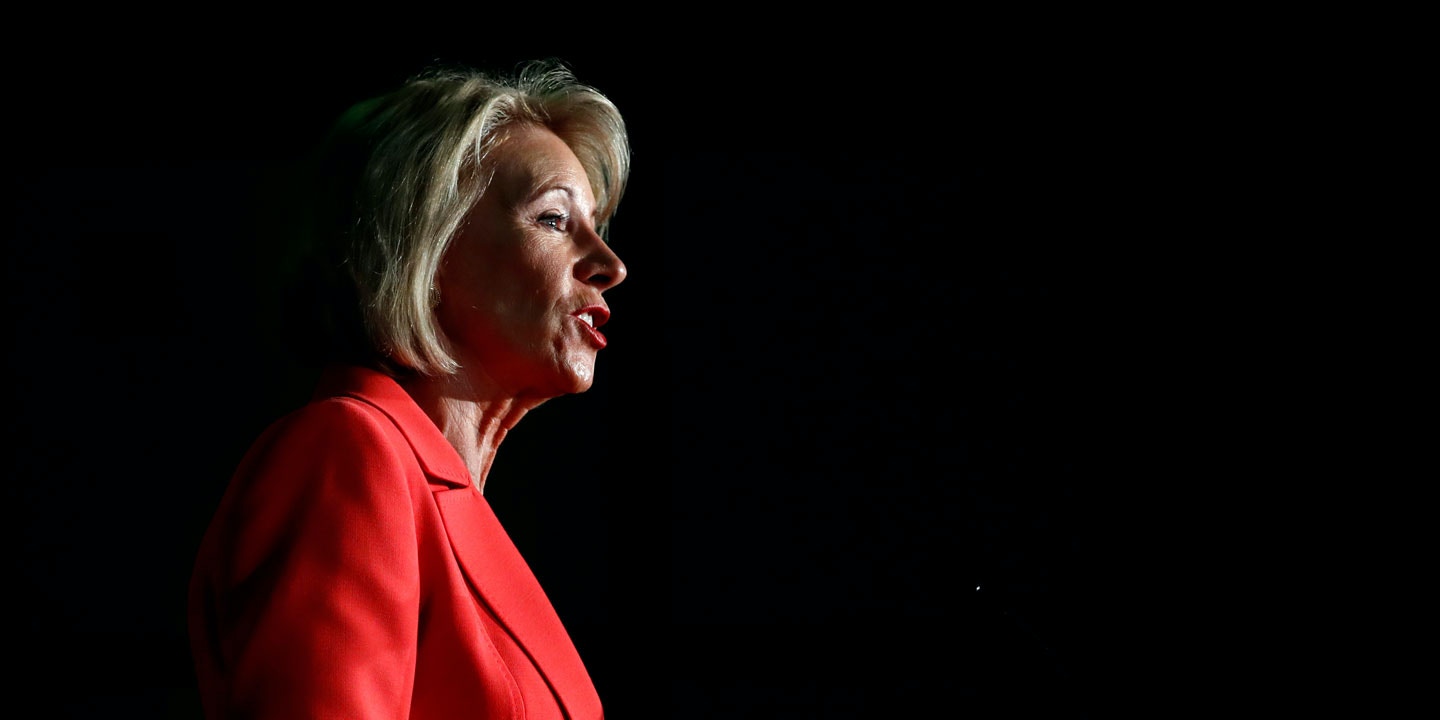 Speaking before a group of some of her most reliable conservative allies, Education Secretary Betsy DeVos on Thursday delivered blistering criticism of the Obama administration and pledged to continue pushing a conservative agenda from her federal perch. She narrowed in on the former president’s protections for survivors of campus sexual assault, which she lambasted as a brazen abuse of power.

DeVos’s speech, before the Washington, D.C., Lawyers Chapter of the Federal Society, comes almost one year into her polarizing tenure in the federal government. The billionaire Republican philanthropist from Michigan joined the administration with no experience working in the public school system, attending a public school, or sending her children to public school, and she has quickly earned a reputation for scaling back civil rights investigations, rolling back rules, and shrinking the size of the department.

Her lunchtime address, which the Department of Education failed to publicly announce, was held at Tony Cheng’s Mongolian Restaurant in Chinatown. She began by acknowledging her connections to Federalist Society co-founder Spencer Abraham. Back when she served on the Republican National Committee for Michigan, DeVos chaired Abraham’s 1994 U.S Senate campaign. She wrote at the time that he would “defend the Judeo-Christian values that made us what we are, but which are under attack from the liberal elite here at home.”

DeVos then praised President Donald Trump for nominating Federalist Society member Neil Gorsuch to the Supreme Court. “While we all know Justice Antonin Scalia is irreplaceable and missed, we know he would be proud to see Justice Gorsuch on the bench,” she said, emphasizing that Gorsuch understands that the Constitution is “not a so-called living document” and cannot be changed based on “the whims of any politician or social norm.”

She then moved on to wax philosophical about freedom. “Somewhere along the way… the importance of our [Constitution] has been neglected, perhaps too many have been lulled into believing our freedoms can simply be passed along in the bloodstream, instead of rightly understanding that freedom must be taught, and it must be protected.” And what exactly should be taught about freedom? According to the education secretary, that “it is not a gift from government” and that it’s “inscribed on our hearts by our creator.”

DeVos correctly noted that civics and history have taken a backseat in K-12 education — an uncontroversial observation in the era of standardized testing that focuses on math and reading — but then added that history and civics have also been targeted by “revisionists.” The crowd nodded approvingly when she said she fears “we have launched more than one generation that isn’t even at the Schoolhouse Rock level.”

Playing to her audience of conservative lawyers and law students, she moved to then praise the Federalist Society for its work addressing what conservatives say is a secular takeover of curricula on college campuses. “Thirty-six years ago, the Federalist Society was founded because too many universities were dominated by liberals who interpreted the Constitution without actually reading it,” she proclaimed. “And things might be even worse today,” she added, offering no evidence to support this claim.

Following this preamble, DeVos congratulated herself and her colleagues for their work thus far at the Department of Education. Under her watch, she said, the federal agency has rolled back a slew of regulations and “once again operates under the rule of law.” Or a set of laws that benefit the secretary’s friends and business associates, at least.

As an example, she pointed to the Obama administration’s borrower’s defense to repayment – a rule meant to protect students from predatory for-profit colleges. All student loan contracts have a “defense to repayment” clause that enables students to petition the Education Department to discharge their debt if they think they’ve been defrauded. The Obama administration revised the regulation to make it easier for students to file such claims and shift more of the loan discharge burden onto schools. DeVos suspended the rule that was set to take effect on July 1, and 19 attorneys general have since filed suit against her.

“[The rule] offered student loan forgiveness to students who simply claimed their school had defrauded them,” said DeVos on Thursday. “Yes you heard that correctly. An evidence requirement for fraud, which is what many of you would call ‘hearsay.’ … You don’t need a J.D. to see some of the flaws in that approach.”

According to a report released in early December from the Education Department’s inspector general, the department approved more than half of the 46,000 borrower-defense claims it received between July 1, 2016, and January 20, 2017. Under President Donald Trump, however, nearly 26,000 more claims had been received, and zero had been approved. A few weeks after the IG report was released, DeVos’s team announced it would start offering “partial relief” to students, based on a formula that involves comparing the earnings of students who say they’ve been defrauded to the average earnings of students in similar programs.

Not everyone thinks DeVos’s Education Department is operating under the rule of law. California Attorney General Xavier Becerra called the secretary’s partial relief move “illegal,“ maintaining that students are entitled to full debt relief. Ranking Member of the Senate Health, Education, Labor, and Pensions Committee Patty Murray, D-Wash., also said she has “serious concerns that the department may not have followed federal law in repurposing earnings data to deny the full relief borrowers deserve.”

On Thursday, DeVos praised the Education Department’s work rescinding the Obama-era guidance on campus sexual assault, guidance she called “perhaps the most infamous example of the prior administration’s abuse” of its authority. The Dear Colleague letter, issued in 2011, compelled colleges to use a “preponderance of the evidence” standard when determining whether a student had sexually assaulted another. The preponderance of the evidence standard, common in civil cases, has since been replaced by a higher legal standard known as “clear and convincing evidence.” (The highest burden of proof, used for convictions in criminal proceedings, is the “beyond a reasonable doubt” standard.) DeVos announced that soon her agency will propose a new rule to address sexual misconduct and solicit comments from survivors, those falsely accused, university administrators. and other students.

Last summer, Candice Jackson, then the top civil rights official in DeVos’s department, famously asserted that 90 percent of campus sexual assault accusations were due to drunken hookups and bad breakups. Under fire, she later apologized for her remarks, and DeVos has apparently learned to not make the same rhetorical mistakes. On Thursday, she offered appropriate lip service, affirming that “there is no place for sexual violence on campus or anywhere else” and that “we must always rise to meet the needs of survivors.” Nonetheless, according to DeVos, the Obama-era protections were “an egregious use of government force.”

The rest of her speech concerned returning power back to the states and families, “rethinking” what education should mean, and expanding support for school choice. She used stock lines from previous speeches, including one she gave earlier in the week at the American Enterprise Institute. (At that event, DeVos criticized the education policies of both Obama and George W. Bush, and federal school reform in general.)

During a relatively brief Q&A portion at Tony Cheng’s, DeVos dodged a question about the inclusion of evolution in school curricula. “I want to be really clear,” she said, “I’m not an advocate of any kind of national curriculum. I continue to encourage the most local level to be able to have the kind of flexibility to meet individual students’ needs.” Whether students must learn about natural selection or creationism is something local communities should apparently have the “flexibility” to determine.

Speaking freely before a crowd of 100 likeminded conservative legal activists, the education secretary was right at home.