With the possibility of a second government shutdown looming, the U.S. Senate decided to take up a bill banning abortion after 20 weeks. 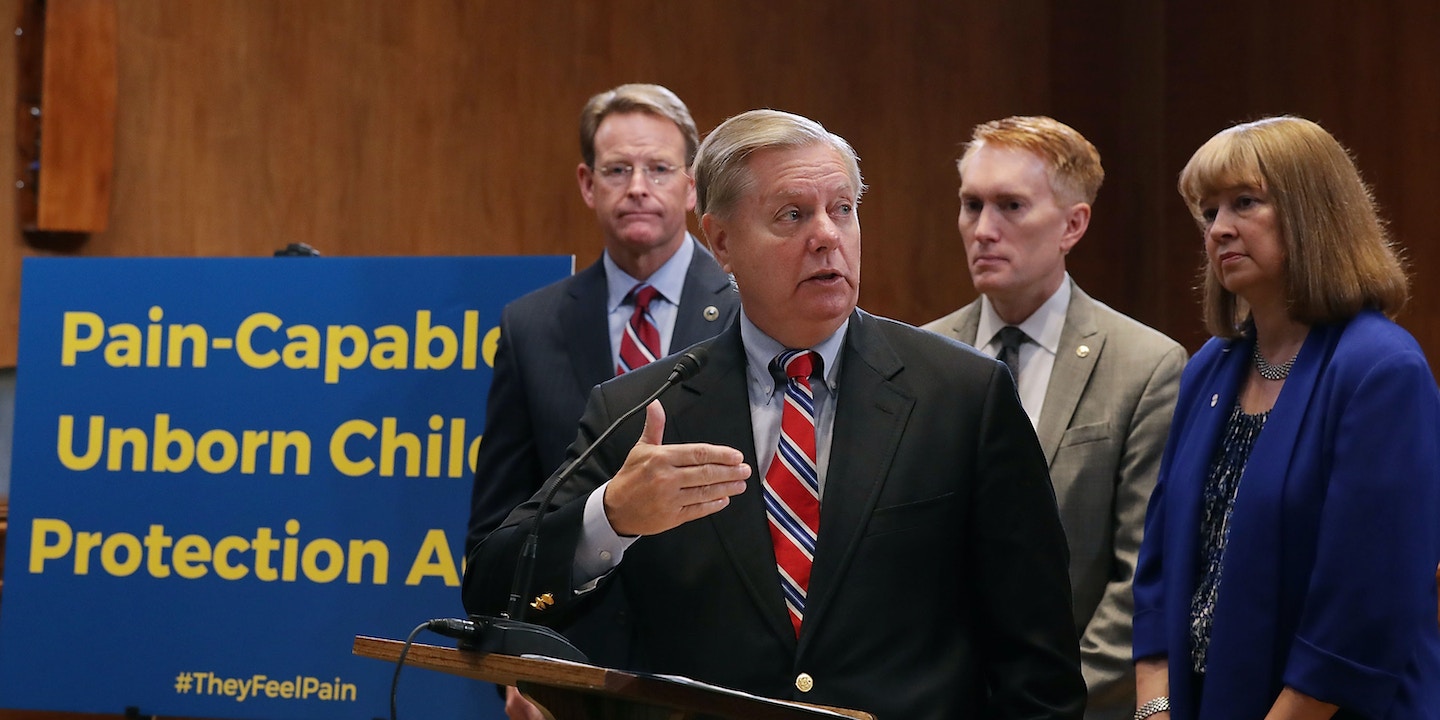 With the possibility of a second government shutdown looming, the U.S. Senate on Monday afternoon focused its attention not on immigration or any other practical budgetary matter, but instead channeled its energy into an effort to curtail the reproductive rights of millions of women.

Specifically, the Senate convened on January 29 to consider S.2311, which would ban all abortions after 20 weeks, with narrow exception, and would threaten prison time for physicians who fail to comply with the law’s myriad requirements.

There is “no federal law protecting these young lives from abortion,” Iowa Republican Sen. Joni Ernst, a vocal and strident abortion foe, told her colleagues from the floor. As a result, she said, thousands of lives every year are ended in pain. “This is unacceptable.”

The measure, known as the Pain-Capable Unborn Child Protection Act, rests on the idea that beginning at 20 weeks gestation, a fetus can experience pain and thus, is tortured by abortion — a heavily disputed notion that rests on weak medical foundation. Although the enumerated legislative findings preceding the bill’s text suggest that a fetus can feel pain in the same way that a child or adult experiences pain, this claim is not medically accepted. The bill’s author is Sen. Lindsey Graham, and 43 of the 45 co-sponsors are men.

Under the bill, women would be barred from seeking to terminate a pregnancy from the 20th week, except when the termination is necessary to save the life of the woman, “endangered by a physical disorder, physical illness or physical injury,” including life-threatening conditions “caused by or arising from the pregnancy itself.” The text does not include an exception for “psychological or emotional conditions.”

The bill would also carve out an exception for pregnancy arising from rape or incest, but only if the woman has obtained medical treatment or counseling in connection with the assault. In the case of minors, the assault must have been reported to child welfare authorities or police.

And even if those hurdles are cleared the proposed law would require the abortion doctor to perform the procedure “only in the manner which … provides the best opportunity for the unborn child to survive” — meaning by avoiding the most common and safest form of later-term abortion. Lawmakers in a number of states have tried to ban that procedure, known as dilation and evacuation, but have been blocked from doing so by the courts.

Aside from the questionable science and logic underpinning the measure, however, there are other problems with the bill — beginning with the fact that it would fly in the face of Roe v. Wade and other decisions that affirm a woman’s fundamental right to choose abortion before fetal viability, generally considered to begin at roughly 24 weeks. Beyond the constitutional problem, there are also practical considerations that make the bill an ill-considered one, not the least of which is that many life-threatening fetal abnormalities aren’t detectible until later in pregnancy. Meanwhile, the relentless passage by a number of states of unreasonable and unnecessary restrictions on abortion access have also served to delay a woman’s ability to access services in a timely manner and increase the cost of care — onerous restrictions that hit poor and minority women particularly hard — and can force a woman to carry a pregnancy for a longer term than she might want to.

In short, the measure is not only unnecessary, but also dangerous. “This is yet another attempt to undermine women’s health and decision-making that won’t stand up in a court of law, or in the court of public opinion,” Nancy Northup, president and CEO of the Center for Reproductive Rights, said in a statement. “This bill is both unconscionable and unconstitutional.”

It isn’t the first time that Congress has floated such a measure. It was first introduced in 2012, but would have applied only to the District of Columbia. A second try, floated in 2013, was national in scope but contained no exemptions for rape, incest, or a woman’s health. It passed the House, but was never voted on in the Senate. The House again passed such a measure in 2015, but the bill was blocked by the Senate. The House in October 2017 once again took it up and passed the measure, leading to today’s consideration by the Senate. Trump has said he would sign the measure should it make it to his desk.

Whether the Senate will actually muster the votes to pass the restriction is another thing altogether; the Republicans’ slim majority makes it unlikely. The effort is more political theater than practicality. While 21 states have passed some sort of pre-viability abortion cutoff bill — North Dakota placed its ban at six weeks into pregnancy, at a time when many women aren’t even aware that they are pregnant — in every state where such a measure has been challenged, it has been blocked from taking effect, including by the U.S. Supreme Court, which thus far, has declined to consider the issue.

That hasn’t stopped the states from moving forward, however. According to the Center for Reproductive Rights, 20-week bans are now pending in seven additional states (Missouri, Mississippi, New Jersey, New Mexico, New York, Oregon, and Washington) but have yet to gain traction.

In his opening comments before the Senate on Monday afternoon, Oregon Democratic Sen. Ron Wyden noted that this measure is just one in a long line of assaults on women’s health care, which he called part of Trump’s agenda of “health care discrimination.” Indeed, 2017 was a rough year for parity in women’s health — including the administration’s determination to dismantle the Affordable Care Act and its guarantee of access to no-cost contraceptives.

When the current legislative session ends, Wyden predicted, the time the body spent “attacking the health care of women will be right up at the top of the list of how this Congress spent their day.”