At Republican Retreat, Protest Power Was on Display as Progressives Eye Midterm Elections

Protesters from nearly 10 states marched to decry potential cuts to Medicaid and other welfare programs, and denounce the Republican agenda more broadly. “El pueblo unido, jamás será vencido,” chanted members of the Latino advocacy group, Make the Road Pennsylvania. “The people united will never be defeated.” They sang “Un Millón de Amigos” as the children who had accompanied them blew on vuvuzelas. Alongside them, activists from Fight for 15 handed out “Show me $15 and a union” buttons. There were pink pussy hats galore, and someone dressed like the Monopoly Man held up a “GOP: Party of the 1%” sign. A stiltwalker in an American flag top hat, who towered over the crowd as they marched for about 2 1/2 miles, miraculously never tripped.

This was the scene on Thursday as hundreds of people descended on White Sulphur Springs, West Virginia, where Republican members of Congress gathered last week for an annual retreat. As the GOP talked about tax law and infrastructure, and as they wined and dined with President Donald Trump and Vice President Mike Pence, protesters from nearly 10 states marched to decry potential cuts to Medicaid and other welfare programs, and denounce the Republican agenda more broadly.

Arthur Blair, 68, was one of the activists who made the six-hour trek from Washington, D.C., to West Virginia to protest the GOP retreat, which was held at the Greenbrier, a luxury resort that sits on 11,000 acres. Twelve years ago, he became disabled with bone degeneration. His 27-year-old son is a paranoid schizophrenic who has been in and out of the hospital his entire life, but is now getting along with a meticulous combination of medication and intervention programs while living in housing from federal programs. If the programs didn’t exist, or if Republicans act on proposed cuts to the social safety net, Blair said, his son would become homeless.

“We got him in residential treatment and in a day program, so if Medicaid is interrupted — particularly by the policies that are suggested by the GOP and Trump administration — it would almost set him back 10 years,” Blair said. “Because the medication and everything has to be on point every day and the expense would be out of reach.”

Republican lawmakers appear to have moved on from their mission to repeal and replace the Affordable Care Act, but Medicaid, which covers 68 million people, increasingly appears to be at risk. The Trump administration opened the door to allowing states to enact Medicaid work requirements, a policy that would devastate many Medicaid recipients who are unable to work due to age, disability, or sickness. House Speaker Paul Ryan continues lusting after “welfare reform” — a policy to reign in Medicaid and Medicare to “tackle the debt and the deficit.” Ryan used “workforce development” as a euphemism for cutting government assistance programs during his pitch to congressional Republicans at last week’s retreat in West Virginia, a state with some of the highest rates of reliance on Medicaid and other safety net programs. 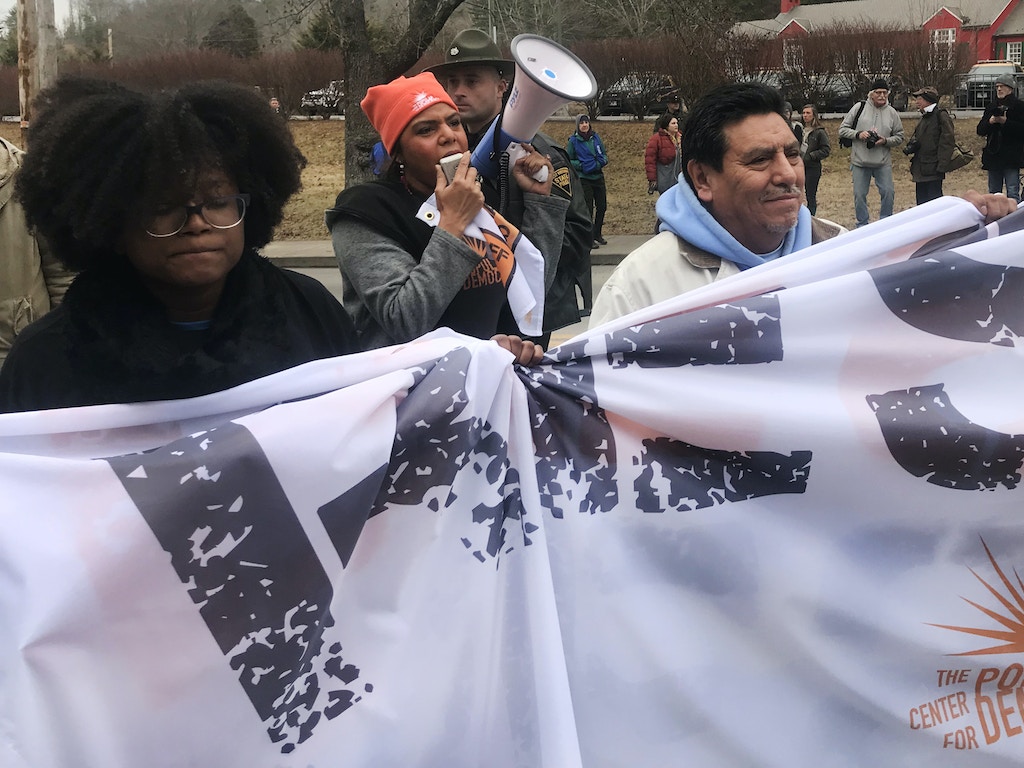 Protesters march through White Sulphur Springs, W.V., to the Greenbrier resort, where the annual GOP congressional retreat was held on Feb. 1, 2018.

The protesters’ action at the Republican retreat was organized by the Center for Popular Democracy Action, in coordination with local affiliates. It culminated with a march on the main street of White Sulphur Springs to the front of the Greenbrier, coinciding with Trump’s address to Republicans that day. While the focus of the protest was safety net programs, the activists also chanted in support of immigrants, women, the LGBT community, the poor, and those living with disabilities.

Activists are optimistic that their protest power will translate to political power in the midterm elections, even in a state like West Virginia. Gary Zuckett, executive director of the West Virginia Citizen Action Group, said West Virginia is known as Trump country, but people seem to forget that Vermont Sen. Bernie Sanders won every county in the state’s primary, proving the resistance in the state is “alive and well.”

“I’ve never thought West Virginia is a conservative state or a red state,” said Sammi Brown, federal campaign director for the West Virginia Healthy Kids and Families Coalition. “It’s really easy to believe that right now, but what it was was a rejection of the power paradigm. What we are is very populist. Yes, in the general [election], we went for Trump, but in the primary, we overwhelmingly went for Bernie.”

Activists are optimistic that their protest power will translate to political power in the midterm elections, even in a state like West Virginia.

Sanders supporters take a lot of flak from people who think they only take on establishment Democrats instead of Republicans and the Trump administration. But progressives in West Virginia find these criticisms disingenuous because, after all, there they were at a protest against Republicans and the Trump administration. “We wanted to come down here to be with our allies from all over the country to send a message to Trump and the GOP that they’re taking us on the wrong direction,” Zuckett said.

“I imagine there’s a certain fraction of Bernie supporters that won’t support middle-of-the-road Democrats, but I really think that we need to flip the control of our national government and our state government here in West Virginia to the other side of the aisle,” Zuckett said. “Well, we need to do that by electing progressives, so I really think that the ‘Bernie bros’ have been overrated.”

Brown, who serves on the executive board for West Virginia Young Democrats and was elected as a Young Democrat of the Year, said that despite being acknowledged by the Democratic Party, “the party also knows I am overtly progressive.”

“I was an adamant, ardent Bernie supporter,” she said. “But I also, when it came down to it, I knew that I needed to vote for Hillary Clinton in the election, and that’s because even though I loved that man and wanted him to win in the primary, I knew that I was fighting up against regressive, oppressive, just outright wrong legislation that was about to come forward.”

She said progressives need to understand that they must fight to lift up values with working people and working families first and foremost. “I understand ideology, I’m with you, I believe it, I fight for it every day,” she added. “But if you cannot meet people where they are, if you’re not going into the communities, if you’re not fighting alongside them, then you’re not upholding those values that you hold dear.”

The activists carried signs as they marched. One displayed a checklist for a Democratic wave in the 2018 midterm elections: “Ignore all polls. Vote like the election depends on it (it does.) Register. Get a friend to register. Get a non-voter to promise to vote. GET ALL YOUR IDs IN ORDER! Re-check all your registrations close to Election Day. Plan your day around this vote. Vote in packs. We have ONE SHOT!”

“I’ve lived here for 43 years and I’ve never seen anything like this,” said one woman who marveled at the sea of protesters from her doorstep. During the march, some residents peered their heads out of their neighboring front doors. Others watched from their windows or held up their phone to take videos. “This doesn’t happen in West Virginia” was a frequent observation.

Outside the White Sulphur Springs Public Library, a mile from the resort, about a dozen people gathered to express their support for the president and his party. One of them carried a sign that read, “I <3 Trump.” Their chants were drowned out by the roars of the protesters.

About four hours after the protest started, as it started to rain, the action ended and the crowd dispersed. People shuffled back onto their buses and headed home. Brown, like other West Virginia progressives, couldn’t hide her giddiness. “What a day!” she said with a smile.

Top photo: Protesters march through White Sulphur Springs, W.V., to the Greenbrier resort, where the annual GOP congressional retreat is held on Feb. 1, 2018.