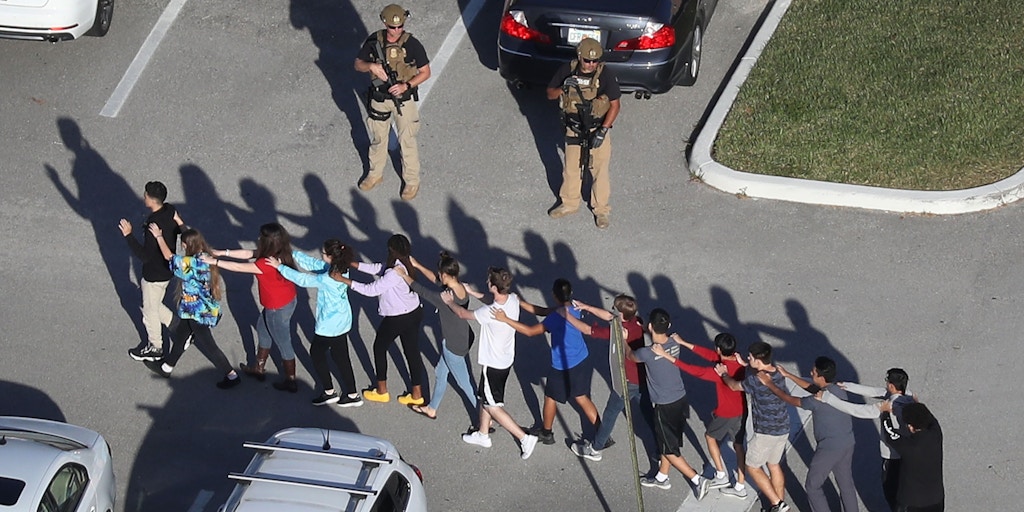 People are brought out of the Marjory Stoneman Douglas High School after a shooting at the school that reportedly killed and injured multiple people on February 14, 2018 in Parkland, Florida.

It was true for Dylann Roof in Charleston. It was true about for any number of violent white men in Charlottesville. And it was true for Nikolas Cruz in Parkland, Florida.

Like these other young men who turned violent, lots of people who interacted with Cruz saw the day coming when he would do something drastic, maybe even one day shoot up a school.

He had long since been expelled from his high school. One student who had served with him in the Junior ROTC called him “a psycho.” Another student said he was a weapons enthusiast who tried to sell weapons at school. Yet another student said he had been banned from bringing a backpack to school as a student after bullet casings were found in it.

Lots of people who interacted with Cruz saw the day coming when he would do something drastic, maybe even one day shoot up a school.

Classmates reported that he stalked someone in the school. Another student said he was physically abusive to his ex-girlfriend. His social media profiles were full of guns, ammo, bigotry, and threats. A teacher said he was a known threat. Neighbors knew something was up; Cruz talked constantly about killing animals.

Last year, he had been reported to the FBI for making violent threats online, and it happened again this year. Someone warned the FBI about Cruz on January 5, 2018, according to the bureau, but the feds never investigated it. Local police reportedly came to his house 39 times over a period of seven years, although it’s not yet clear if the incidents all involved Cruz.

Yet none of this prevented Cruz from building what he openly admitted was an “arsenal” of weapons that he repeatedly said online that he hoped to use – even at a school.

Imagine if Nikolas Cruz was a young Muslim. Imagine he had, however fleetingly, been tied to a group of radical Muslims operating elsewhere in Florida — whether it was true or not, that just the suggestion had been made.

I can tell you this much: If Cruz was a young Muslim, this would’ve never been allowed to go this far. Do you really think the FBI would have failed to investigate a young Muslim with this history? Nikolas Cruz, 19, a former student at Marjory Stoneman Douglas High School in Parkland, Florida, where he allegedly killed 17 people, is seen on a closed circuit television screen during a bond hearing in front of Broward Judge Kim Mollica at the Broward County Courthouse on February 15, 2018 in Fort Lauderdale, Florida.

No matter how extreme, no matter how numerous the warning signs, no matter how horrendous the cost, a person who openly talks about white supremacy and violence simply doesn’t raise alarms with America’s security apparatus.

While the president of the United States is asking for billions of dollars to build a security wall along the Mexican border, violent white supremacists within our borders are murdering and maiming people. Donald Trump wants to ban people from a handful of Muslim countries from coming into America because they might be terrorists, but Americans are terrorizing other Americans without needing to get visas at all.

An apparent white supremacist can go through life making threats, talking about weapons, harassing people, warning that he would be a school shooter, have people call the FBI on him, and yet never get serious scrutiny from just about anyone. There were just no consequences.

On Thursday, Instagram confirmed that the profile photo of Nikolas Cruz with his red, Trump-inspired “Make America Great Again” hat was indeed real. He also wears the cap in a video shooting what appears to be a BB gun in his backyard, months before the shooting. Trump, for his part, has also gone through life spewing white supremacist rhetoric, sexually harassing and assaulting women, all with little or no consequences. Quite the opposite: Trump was elected to be the most powerful office in the world. It’s no wonder Cruz admired him.