Bernie Sanders on Puerto Rico Neglect: “Do You Think This Would Be Happening in Westchester County?”

Washington’s failure to adequately help Puerto Rico rebuild its economy and school system was the focus of a daylong conference at the U.S. Capitol. 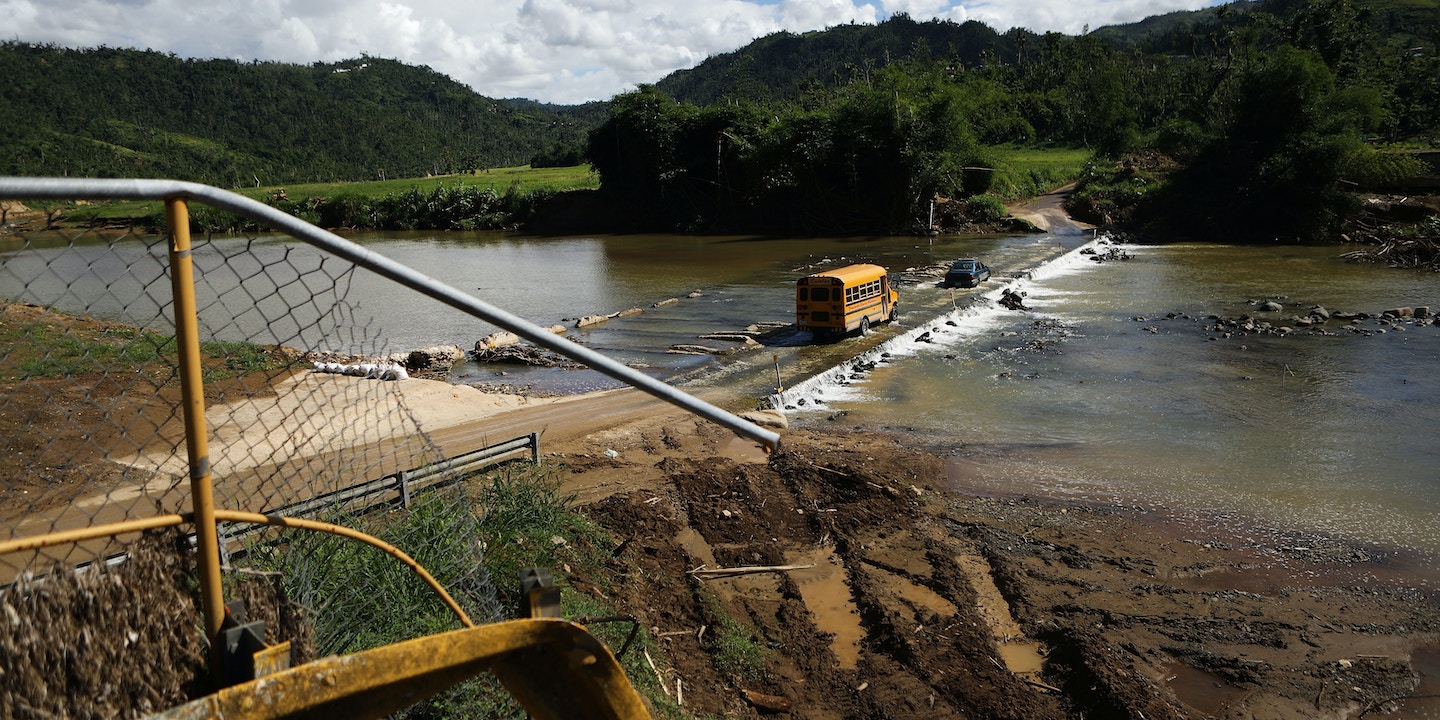 On March 2, 1917, President Woodrow Wilson signed a law granting U.S. citizenship to the residents of Puerto Rico. But 101 years later, the federal government, by abandoning the island in the wake of a crippling debt crisis and an even more devastating hurricane, is treating Puerto Ricans like citizens in name only.

Washington’s failure to adequately help Puerto Rico rebuild its economy and school system was the focus of a daylong conference at the U.S. Capitol on Thursday, hosted by the American Federation of Teachers, the Hispanic Federation, and the Albert Shanker Institute.

The event drew powerful progressive politicians — namely Sens. Bernie Sanders, I-Vt.; Elizabeth Warren, D-Mass.; and Richard Blumenthal, D-Conn. All three back the Puerto Rico and Virgin Islands Equitable Rebuild Act, often referred to as a “Marshall Plan” for the territories. The bill, authored by Sanders, would provide $146 billion to Puerto Rico’s recovery, would forgive its debt, and would establish Medicaid and Medicare parity. Unlike in the U.S., the federal government subjects Puerto Rico and the Virgin Islands to annual Medicaid caps.

Five months after Puerto Rico’s worst natural disaster in nearly a century, more than 30 percent of the island — over 900,000 people — still live without electricity. Roughly 270 public schools still lack power, and some areas of the island do not expect to see restored electricity until the end of May. Puerto Rico was struggling even before Hurricane Maria: With roughly $123 billion in debt, the island declared bankruptcy last May.

Take our survey: Should Puerto Rico’s debt be wiped out?

The federal government last month promised some additional aid to Puerto Rico. When Congress passed a two-year budget to avoid a government shutdown, it included billions of dollars for Puerto Rico’s recovery, though still far short of the $94.4 billion the island requested. The U.S. Department of Education also announced on Wednesday that it would be distributing an additional $2.7 billion to Puerto Rico to help its public schools and universities recover.

But the government’s assistance so far has been underwhelming. Last October, when Congress passed a $36.5 billion disaster relief bill to help areas ravaged by hurricanes and wildfires, it gave Puerto Rico $4.9 billion as a loan. (Other devastated areas like Texas, Florida, and California instead received grants. The loan adds to Puerto Rico’s already crushing debt.) On Tuesday, the U.S. Treasury announced it would be cutting that loan to $2 billion, though it’s not clear if the federal government will even agree to distribute these funds at all.

At the conference on Thursday, Warren called the federal government’s recovery response “embarrassing” and stressed the need for sustained pressure on lawmakers to take action. She pointed out that in December, Republican Sen. Bill Cassidy joined Sanders and seven Democrats in asking Lamar Alexander, Republican chair of the Senate Health, Education, Labor and Pensions Committee, to hold hearings on Puerto Rico and the Virgin Islands.

“Given the extent of the damage inflicted upon both territories, as well as the important roles of the departments under this committee’s jurisdiction in ongoing hurricane relief efforts, we believe such hearings would be an important part of the Committee’s oversight related to hurricane recovery,” they wrote in a letter.

Warren cited Cassidy’s support as an encouraging glimmer of bipartisan hope, but noted that the committee has yet to act on that recommendation. “If we don’t keep pushing, the hearings won’t happen” she said.

The Massachusetts senator also pushed the necessity of debt forgiveness. “Puerto Rico needs debt relief. Vulture funds should not get one more cent from the island,” she declared. “It is especially the case that money that Congress appropriates to Puerto Rico is money that should not go toward paying Wall Street.”

“Puerto Rico needs debt relief. Vulture funds should not get one more cent from the island.”— Sen. Elizabeth Warren

For his part, Sanders took clear swipes at Puerto Rico’s proposed education reform bill that would bring charter schools and vouchers to the island. He likened it to New Orleans following Hurricane Katrina and warned that disaster capitalists might prey on Puerto Rico.

“Disaster capitalism means people who take advantage of a disaster to do bad things, and what they’re trying to do in this moment, in this terrible moment for Puerto Rico, is to move to very aggressively privatize public services like schools and the electrical grid,” he said.

Sanders went on to list the benefits that the federal government offers to citizens on the mainland but denies to Puerto Ricans, including parity for Medicaid, the Earned Income Tax Credit, and the Child Care Tax Credit.

“Do you think this would be happening in Westchester County, New York?” Sanders asked the audience, referring to the island’s snail-paced recovery. “We are here to tell the people of Puerto Rico that they are not forgotten, that they are not alone, that we will do everything that we possibly can to rebuild the island.”

Marie Mora, an economics professor at the University of Texas Rio Grande Valley, was one of several academics who spoke at the conference. Mora traced Puerto Rico’s economic decline back to 2006, when the federal government eliminated tax breaks for companies doing business there. Following the expiration of IRS Code Section 936, there was a significant loss in private and public sector jobs, and a massive net outmigration to the mainland. This, Mora said, coupled with a rapidly aging population and diminishing healthcare, education, and utility investments, all contributed to the fiscal stress and “vicious cycle” Puerto Rico now faces.

Though the island’s population has been shrinking, 3.3 million people still live there — a population larger than that of 21 states and Washington, D.C.

Díaz slammed the charter and voucher proposal, which is backed by Puerto Rico’s Gov. Ricardo Rosselló. Díaz said her union is pushing an alternative education reform plan based on turning each public school into a community hub that would provide increased social services. The so-called transformation zones are similar to models in New York City and the Miami-Dade County Public Schools.

“We know that some students are failing and we need transformation of our school system, but it is not something that comes from someone who is behind a desk,” Díaz said. “It should be made in a way that everyone participates, to debate what we want, what kind of citizens we want to develop, what are the needs of the country, what should be done first, what political issues need to be solved.”

Puerto Rico’s Education Secretary Julia Keleher previously told The Intercept that she felt that embracing education reform proposals like charters and vouchers would help the island attract new sources of federal funds for its recovery. But the teachers union feels left out of the conversation. Díaz told The Intercept last week that her union was not included in drafting the government’s education reform bill, and she does not feel as though teachers’ feedback has been taken seriously since the legislation was first introduced.

Some education experts offered early endorsements for the alternative reform plan put forth by Díaz and her union.

“The children of Puerto Rico will be well-served by transformation zones in which schools anchor local communities,” said Susan Moore Johnson, a research professor at Harvard’s Graduate School of Education, in a statement.

“Across the United States, school districts have relied on this template to build strong systems that provide a solid education for their students, and the model makes great sense for Puerto Rico as well,” said David Kirp, a public policy professor at the University of California, Berkeley.

It’s now up to the federal government to change course and help the island get back on track — and treat Puerto Ricans like the U.S. citizens they are.

Top photo: A school bus crosses a makeshift bridge for vehicles, near where the original bridge was washed away by Hurricane Maria flooding, on December 20, 2017 in Morovis, Puerto Rico.