Bernie Sanders and Democrats in the Senate are trying to put Puerto Rico back in the news. 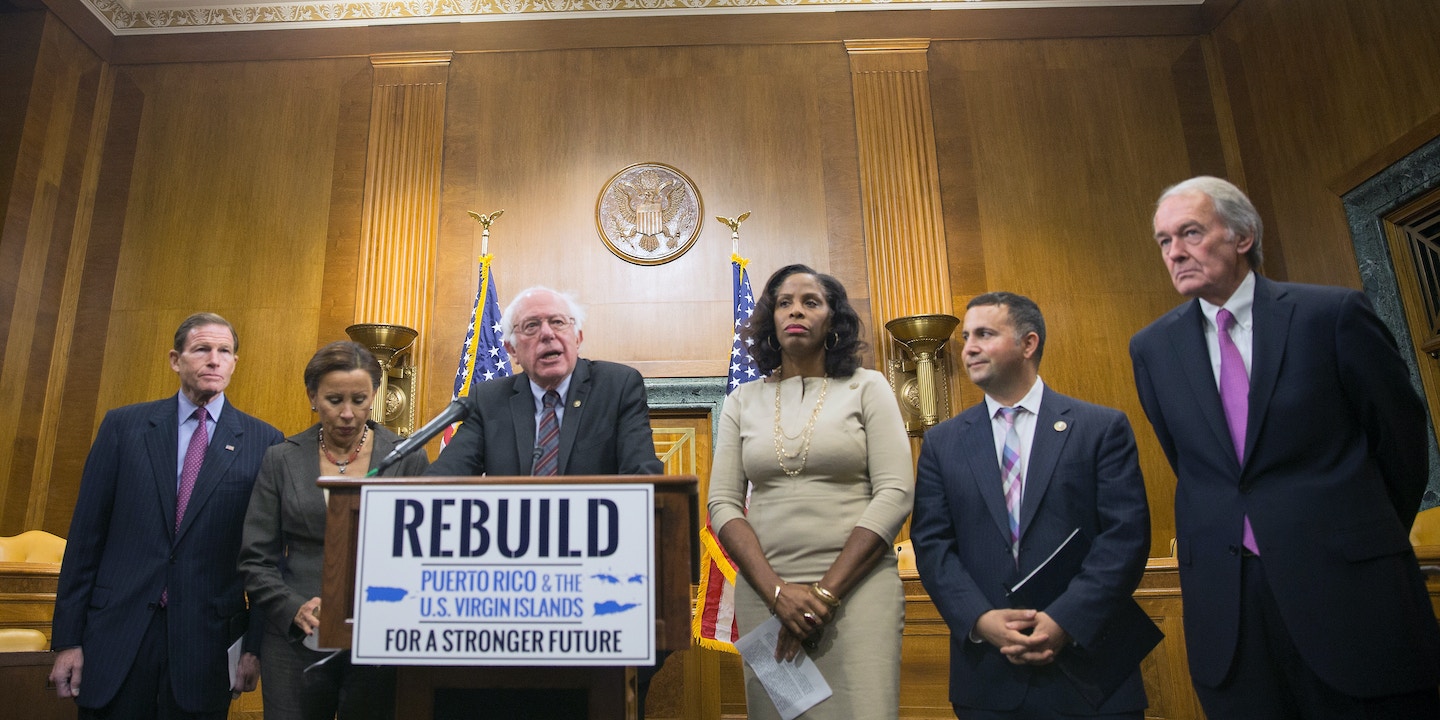 Sens. Bernie Sanders and Elizabeth Warren on Tuesday unveiled a massive $146 billion “Marshall Plan” for Puerto Rico with several other senators. The plan includes immediate relief for the island’s cash-strapped government, billions more for economic development, renewable energy, and Medicaid and Medicare parity, a key priority for the island.

“More than two months after Hurricanes Irma and Maria struck Puerto Rico and the Virgin Islands, half of the people there — American citizens all — still have no electricity,” Sanders said at a press conference Tuesday morning.

The far-reaching legislation would grant $62 billion to the governments of Puerto Rico and the U.S. Virgin Islands, $27 billion to renovate infrastructure, and $13 billion in additional Federal Emergency Management Agency funding to rebuild the electric grid “with more modern, resilient technologies,” instead of the Stafford Act’s requirements that the grid be restored to its condition before the storms, according to a summary of the bill from Sanders’s office.

Talks between Sanders, Warren, and other Democrats on a Puerto Rico messaging bill began roughly a month ago, as first reported by The Intercept. The legislation is not intended to become law as written, but to lay down a marker for Democrats to fight for as negotiations continue over relief for the island.

The plan for Puerto Rico, while costly, pales in comparison to the tax cuts Senate Republicans are putting the finishing touches on, estimated to cost the Treasury some $1.5 trillion over the next decade and many trillions more in years to come.

As for Puerto Rico’s crippling $74 billion debt, Warren, D-Mass., said the island needs “full debt relief,” and she will be working alongside Sanders and other colleagues to introduce a debt relief plan in the weeks ahead.

“The vulture funds that snapped up Puerto Rican debt should not get one cent from the island, not one cent,” she said Tuesday.

Sanders also pointed out that unlike Texas and Florida, which suffered natural disasters recently, “the people of Puerto Rico and the people of Virgin Islands, while being full American citizens, they have no United States senators here to represent them,” and “they do not have full voting members in the U.S. House.”

And the Boricua voice in Congress will soon suffer a further loss as Puerto Rican member and outspoken advocate, Rep. Luis Gutiérrez, D-Ill., announced on Tuesday he won’t seek re-election but has plans to help rebuild the hurricane-ravaged island.

For decades in Congress, when Sanders introduced a bill, he tended to do so alone. And when he launched his presidential bid, it was more of a solo protest effort rather than as the leader of a movement. But Sanders has become much more of an organizer, and, as he did with his Medicare for All bill, unveiled his Puerto Rico effort with an influential group of lawmakers, including three — Sens. Kirsten Gillibrand, D-N.Y.; Kamala Harris, D-Calif.; and Warren — routinely floated as 2020 presidential candidates.

“The bill that Senator Sanders has introduced in the United States Congress is a comprehensive plan that provides the blueprint for the transformation of Puerto Rico,” Carmen Yulín Cruz, mayor of San Juan, Puerto Rico, said in a statement. “Senator Sanders also shows a great deal of respect and faith in us when claiming that the recovery or Puerto Rico must be in Puerto Rican hands.”

Top photo: Sen. Bernie Sanders, I-Vt., attends a news conference to discuss “a comprehensive plan to address the immediate humanitarian needs in Puerto Rico and the U.S. Virgin Islands, and ensure that the islands are able to rebuild in a way that empowers them to thrive on Nov. 28, 2017 in Washington, D.C.