Despite legal questions about the sales, Saudi Arabia was the top purchaser of American weapons in 2017. Under the Trump administration, the U.S. government and weapons manufacturers are making a killing through arms sales to other countries. A report released by the Security Assistance Monitor documented that more than $80 billion worth of arm sales notifications were sent to Congress in 2017.

The massive arms sales during President Donald Trump’s first year in office amounted to $5.7 billion more than the Obama administration proposed during its final year in 2016. Barack Obama’s banner year for sales, 2010, saw $102 billion worth of government-to-government sales proposed.

Owing to the spate of large sales under both administrations, the U.S. has maintained its role as the biggest arms exporter in the world. In a report released on Monday by the Stockholm International Peace Research Institute, or SIPRI, an international institute researching conflict and armaments, the U.S. was responsible for 34 percent of the entire world’s arms exports from 2013 to 2017. Russia follows with 22 percent of the world’s exports.

The report from the Security Assistance Monitor, a program of the Center for International Policy that tracks and analyzes U.S. security assistance programs worldwide, notes another difference between the Obama and Trump administration sale proposals: the types of equipment offered to foreign governments. The most significant sale offers under the Obama administration were for military aircraft, while in the first year of the Trump administration, missile and bomb sales dominated. Smoke rises as Yemenis inspect the damage at the site of air strikes in the northwestern Huthi-held city of Saada, on Jan. 6, 2018.

“Signing off on missile and bomb sales to Saudi Arabia when the country was using these weapons to attack the civilian population in Yemen sent an alarming signal about the U.S. support for human rights,” said Colby Goodman, director of the Security Assistance Monitor and editor of the group’s report.

Saudi-U.S. ties have grown warmer under the Trump administration, largely owing to a perceived carte blanche from the U.S. for Saudi Arabia’s Yemen war, support for a Saudi blockade of its erstwhile ally Qatar, and virtual silence from the U.S. in the face of a Saudi purge that reportedly involved abuse. Underlying this support is Saudi Arabia’s intense regional rivalry with the U.S.’s longtime foe, Iran. In a March 2017 meeting, Saudi leadership and Trump publicly declared Iran to be a key regional security threat. (While his relationship with Saudi Arabia was rocky amid nuclear diplomacy with Iran, Obama also sold the Persian Gulf kingdom billions in weapons — his banner year for sales in 2010 included a $60 billion deal with Saudi Arabia for aircrafts and other arms.)

“The USA and European states remain the main arms exporters to the region and supplied over 98 percent of weapons imported by Saudi Arabia.”

Although a group of senators are attempting to end U.S. support for the war in Yemen, Congress has largely failed to stop the flow of U.S. arms sales to the Saudi-led coalition. Sen. Bob Corker, R-Tenn., had recently placed a hold on arms sales to all members of the Gulf Cooperation Council, which included the Saudi-aligned Yemen war coalition members. Corker’s reasoning did not have to do with alleged human rights abuses by the Saudi regime. His goal was to encourage discussion to end internal disputes between countries. When resolving internal conflicts was deemed unsuccessful, Corker lifted his hold, opening the door to the continuation of arms sales. (Corker’s office did not respond to a request for comment.)

The legality of U.S. arms sales to Saudi Arabia was recently questioned by a report from the American Bar Association’s Center for Human Rights, saying the sales violate stipulations under the Arms Export Control Act. Yet, arms transfers continue. So far in 2018, the State Department has approved more than $770 million worth of arms sales and assistance to Saudi Arabia and the United Arab Emirates – both of which are central players in the war in Yemen.

“Widespread violent conflict in the Middle East and concerns about human rights have led to political debate in western Europe and North America about restricting arms sales,” said Peter Wezeman, a senior researcher with SIPRI. “Yet the USA and European states remain the main arms exporters to the region and supplied over 98 percent of weapons imported by Saudi Arabia.” 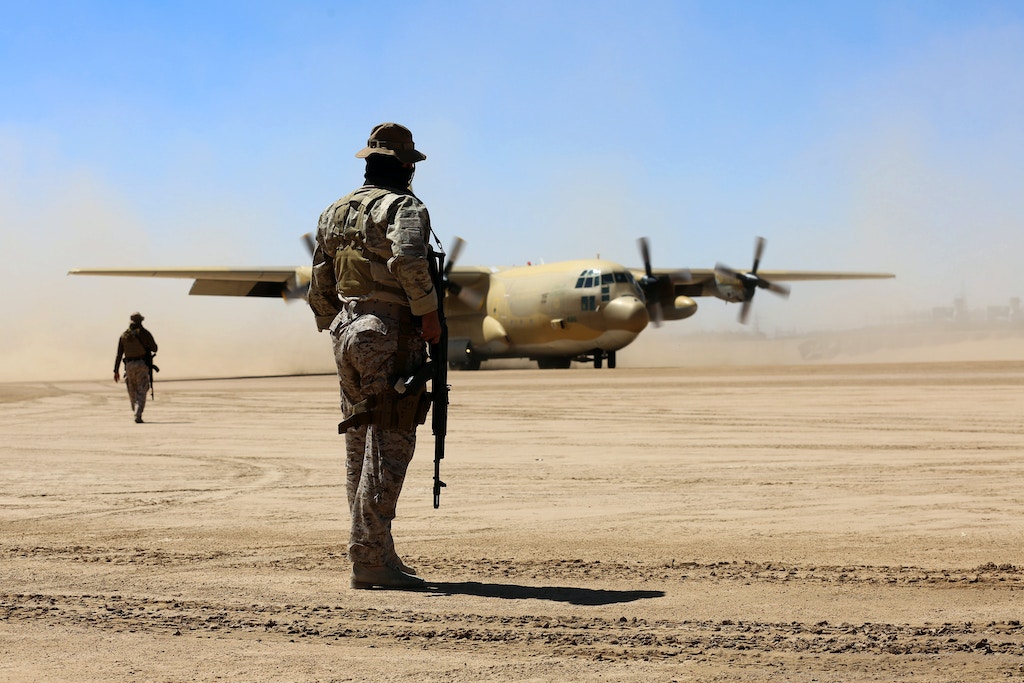 The Arms Export Control Act requires the State Department to notify Congress of its approval for large sales. Congress then has a specific amount of time – which varies depending on the type of sale – to reject the State Department’s proposal for moving forward. If Congress does nothing, the sale goes through.

“The United States takes into account political, military, economic, arms control, and human rights conditions in making decisions on the provision of military equipment and the licensing of direct commercial sales to any country,” states a State Department fact sheet provided to The Intercept.

Congressional notification does not necessarily mean an arms sale deal is completed. But the Monitor’s report notes that notifications are a good way to gauge the administration’s intent.

Congress did reject two arms sales deals in 2017, according to the report. One was for the Philippine police, which has been engaged in an anti-drug campaign of merciless street killings. The other rejected deal was for the presidential guard in Turkey, where an apparent failed coup in 2016 opened the door for further consolidation of power by President Recep Tayyip Erdogan.

The United States partakes in two types of arms sales. The first is a foreign military sale, in which a country buys weapons from the U.S. government – basically a government-to-government sale. The second type of sale is a direct commercial sale, which are private-corporation-to-government sales. Even though the equipment comes from private corporations, sales still need to go through a government approval process.

“The decision to arm repressive regimes and support nations’ acts of war has serious negative consequences for U.S. security.”

According to the State Department fact sheet, the arms sale process can take quite a long time depending on the type of sale. The long process makes it probable that some of the 2017 requests may have been made prior to Trump taking office.

There have been rumors that the Trump administration is attempting to expedite and elevate arms sales. Trump has stressed that the defense equipment industry is a great opportunity to provide more jobs.

“It’s a bad deal,” said William Hartung, author of the Security Assistance Monitor report. “The jobs claims are overrated, and the decision to arm repressive regimes and support nations’ acts of war has serious negative consequences for U.S. security.”

This year is already off to a great start for weapons manufacturers. According to data analyzed by The Intercept, the State Department has already approved more than $13.4 billion worth of government-to-government arms sales in 2018.

Top photo: Saudi soldiers stand by in an airfield as a Saudi Air Force cargo plane lands at an airfield in Yemen’s northeastern province of Marib on Jan. 26, 2018.