Just eight months ago, John Bolton told members of a cult-like Iranian exile group that “before 2019″ they would be ruling Iran. 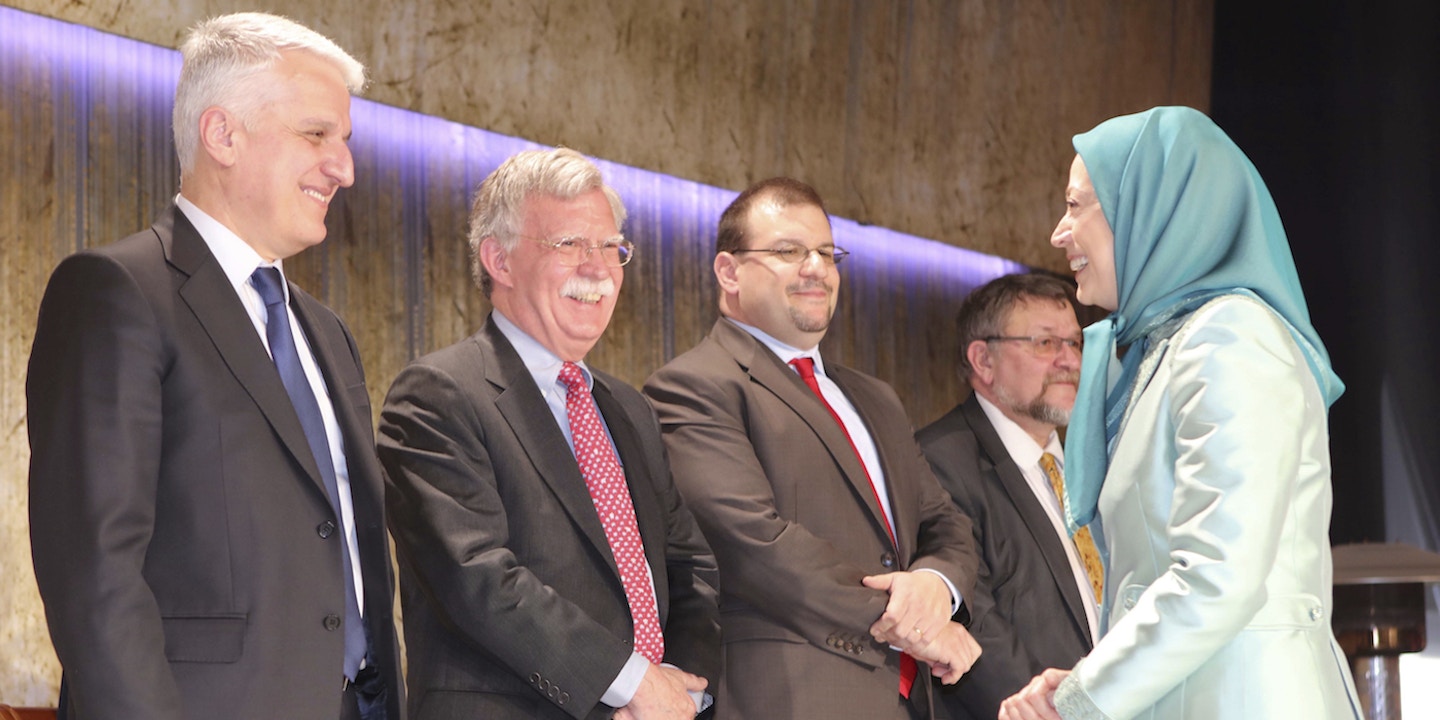 Among those most alarmed by President Donald Trump’s selection of John Bolton as his new national security adviser on Thursday were supporters of the Iran nuclear deal, the 2015 international agreement that curbed Iran’s nuclear program in exchange for a partial lifting of economic sanctions.

Rob Malley, who coordinated Middle East policy in the Obama administration, observed that Bolton’s appointment, along with the nomination of Iran deal critic Mike Pompeo as secretary of state, seemed to signal that the agreement would most likely be “dead and buried” within months. Trita Parsi, leader of the National Iranian American Council wrote on Twitter: “People, let this be very clear: The appointment of Bolton is essentially a declaration of war with Iran. With Pompeo and Bolton, Trump is assembling a WAR CABINET.”

Their alarm was understandable. Bolton, who made his name as a belligerent member of George W. Bush’s State Department and a Fox News contributor, has not only demanded that the Trump administration withdraw from the nuclear deal, he also previously advocated bombing Iran instead. Bolton has spent the better part of a decade calling for the United States to help overthrow the theocratic government in Tehran and hand power to a cult-like group of Iranian exiles with no real support inside the country.

Withdrawing from the Iran #NuclearDeal should be a top @realDonaldTrump administration priority.

Just eight months ago, at a Paris gathering, Bolton told members of the Iranian exile group, known as the Mujahedeen Khalq, MEK, or People’s Mujahedeen, that the Trump administration should embrace their goal of immediate regime change in Iran and recognize their group as a “viable” alternative.

“The outcome of the president’s policy review should be to determine that the Ayatollah Khomeini’s 1979 revolution will not last until its 40th birthday,” Bolton said. (The 40th anniversary of the Iranian revolution will be on February 11, 2019.) “The declared policy of the United States should be the overthrow of the mullahs’ regime in Tehran,” Bolton added. “The behavior and the objectives of the regime are not going to change and, therefore, the only solution is to change the regime itself.”

As the Iranian expatriate journalist Bahman Kalbasi noted, Bolton concluded his address to the exiles with a rousing promise: “And that’s why, before 2019, we here will celebrate in Tehran!”

#JohnBolton 8 months ago among MEK supporters tells them they will overthrow #Iran’s regime and celebrate in #Tehran with Bolton himself present, “before 2019” pic.twitter.com/H7oaaU3faU

To understand how extraordinary it is that the man about to become the president’s most senior national security official made this promise to the MEK, it is important to know that, until recently, the Iranian dissidents had spent three decades trying to achieve their aims through violence, including terrorist attacks.

After members of the MEK helped foment the 1979 revolution, in part by killing American civilians working in Tehran, the group then lost a bitter struggle for power to the Islamists led by the revolution’s leader, Ayatollah Ruhollah Khomeini. With its leadership forced to flee Iran in 1981, the MEK’s members set up a government-in-exile in France and established a military base in Iraq, where they were given arms and training by Saddam Hussein, as part of a strategy to destabilize the government in Tehran that he was at war with.

In recent years, as The Intercept has reported, the MEK has poured millions of dollars into reinventing itself as a moderate political group ready to take power in Iran if Western-backed regime change ever takes place. To that end, it lobbied successfully to be removed from the State Department’s list of foreign terrorist organizations in 2012. The Iranian exiles achieved this over the apparent opposition of then-Secretary of State Hillary Clinton, in part by paying a long list of former U.S. officials hefty speaking fees of between $10,000 to $50,000 for hymns of praise like the one Bolton delivered last July.

But, according to Ariane Tabatabai, a Georgetown University scholar, the “cult-like dissident group” — whose married members were reportedly forced to divorce and take a vow of lifelong celibacy — “has no viable chance of seizing power in Iran.”

Despite such doubts that the MEK’s political wing, the National Council of Resistance of Iran, is any more reliable than Ahmad Chalabi’s Iraqi National Congress proved to be, spending lavishly on paid endorsements has earned the group a bipartisan roster of Washington politicians willing to sign up as supporters. At a previous gala, in 2016, Bolton was joined in singing the group’s praises by another former U.N. ambassador, Bill Richardson; a former attorney general, Michael Mukasey; the former State Department spokesperson P.J. Crowley; the former Homeland Security adviser Frances Townsend; the former Rep. Patrick Kennedy, D-R.I.; and the former Vermont Gov. Howard Dean. That Paris gala was hosted by Linda Chavez, a former Reagan administration official.

At a similar event this January, the backdrop behind former Speaker of the House Newt Gingrich, as he praised MEK leader Maryam Rajavi, made the aim of the group’s investment in American politicians clear. 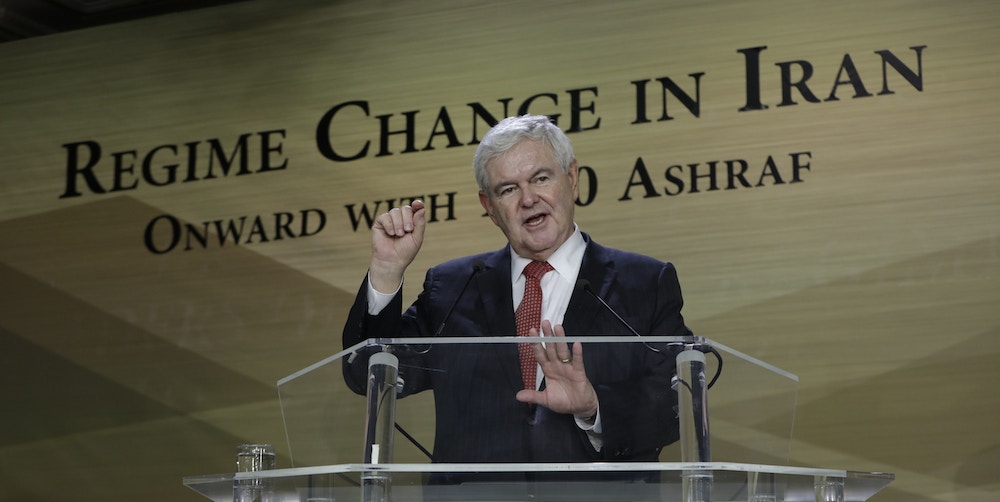 Newt Gingrich addressed a Paris conference of the Iranian exile group known as the MEK in January.

Unsurprisingly, leading figures from among the exile group’s Washington followers have expressed delight over Bolton’s impending elevation to the White House

.@AmbJohnBolton has the right vision and great understanding of the whole region especially the threat from the Iranian regime and the need for a #FreeIran. https://t.co/zlJocvDwgT

Congratulations to @AmbJohnBolton for the new post. Well deserved. https://t.co/TuXgvx9ApY

At the group’s celebration of Nowruz, the Persian New Year, in Albania on Tuesday, Rajavi was joined on stage by Rudy Giuliani, the former mayor of New York City.

Mr. Giuliani reiterated that unlike other countries in the region, there is an alternative to the ruling regime in Iran. Thus, its overthrow will lead to peace and tranquillity in a region that has been severely threatened by the clerical regime.#Iran#IranProtests pic.twitter.com/BFb5fWcFgs

Although the official announcement from the White House was not made until Thursday, Giuliani told the group, to loud applause, that Bolton “is going to be President Trump’s national security adviser.”

In case there was any doubt among the exiles that Bolton might not advise Trump to overthrow Iran’s government, Giuliani assured them that “if anything, John Bolton has become more determined that there needs to be regime change in Iran, that the nuclear agreement needs to be burned, and that you need to be in charge of that country.”

Despite the fact that Trump ran for office as a critic of the decision to invade Iraq, Bolton still refuses to call the preemptive attack a mistake. That position stunned even Fox News’s Tucker Carlson, during an interview two weeks ago. After Carlson pointed out that Bolton had called for regime change in Iraq, Libya, Iran, and Syria, and the first of those had been “a disaster,” Bolton disagreed, saying, “I think your analysis is simple-minded, frankly.”

“I think the overthrow of Saddam Hussein, that military action, was a resounding success,” Bolton told Carlson. The chaos that followed in Iraq, he said, was caused by a poorly executed occupation that ended too soon. On the bright side, Bolton said, the mistakes the U.S. made in Iraq offered “lessons about what to do after a regime is overthrown” in the future.

Top Photo: At a 2017 celebration of Nowruz, the Persian New Year, in Albania, Maryam Rajavi, the MEK leader and self-styled president-elect of the National Council of Resistance of Iran, met international supporters including John Bolton, second from left, a former United States Ambassador to the United Nations. Bolton was flanked by Pandeli Majko, a former prime minister of Albania, far left, and David Muniz, the deputy chief of the U.S. Embassy in Albania.