Bolton is chair of the Gatestone Institute, a nonprofit that publishes commentary and news on the supposed threat Islam poses to the West. 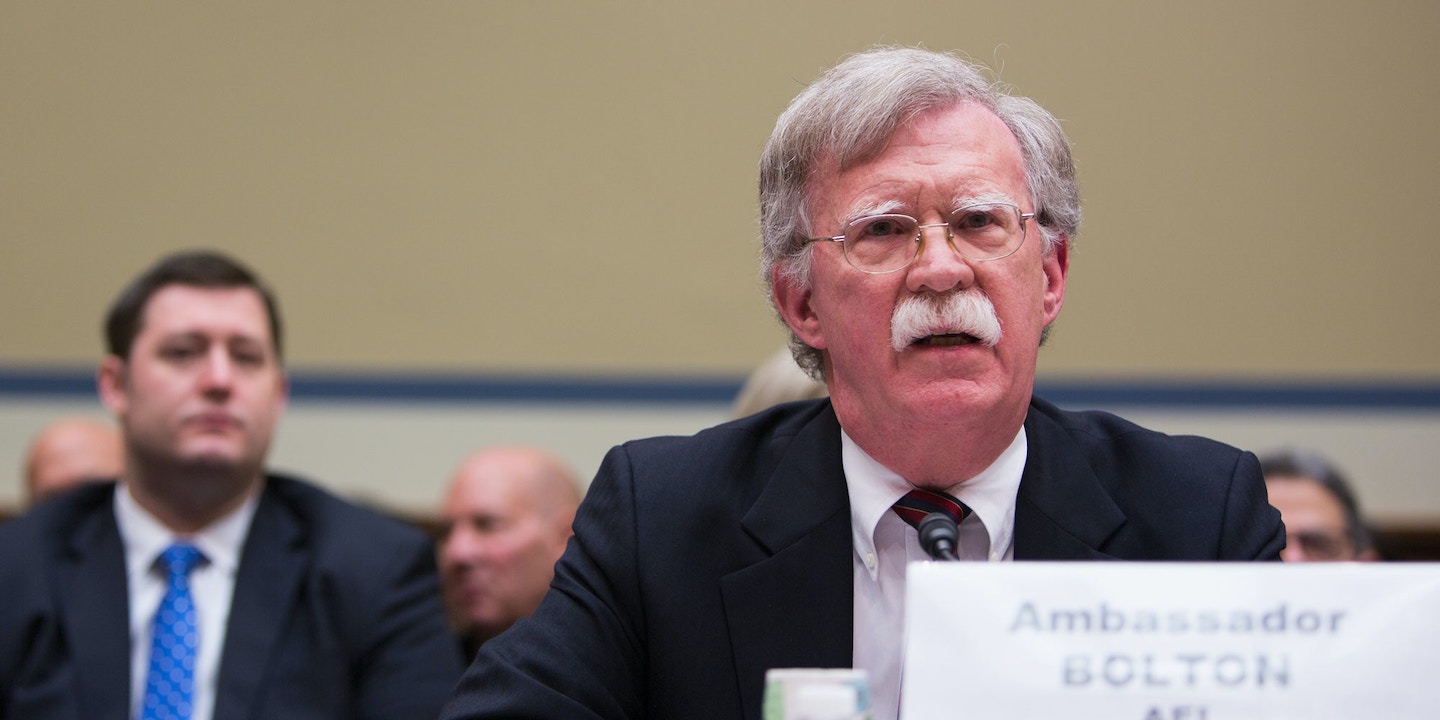 John Bolton, President Donald Trump’s pick to be his new national security adviser, has a long association with a group infamous for its role in publishing “fake news” and spreading hate about Muslims.

Bolton wears many hats. He serves as a fellow at the American Enterprise Institute and a contributor to Fox News, and controls a Super PAC that used money from the billionaire Mercer family to help elect congressional Republicans.

But one role that has received relatively little scrutiny is his work as chair of the Gatestone Institute, a nonprofit that focuses largely on publishing original commentary and news related to the supposed threat that Islam poses to Western society. He has served in that role since 2013. (Bolton did not respond to an email seeking comment.)

A steady drum beat of vitriol is visible on the Gatestone website on almost any given day.

Just this week, the Gatestone Institute published stories claiming that the “mostly Muslim male migrants from Africa, Asia and the Middle East” in Germany are fueling a “migrant rape crisis” and that “Muslim mass-rape gangs” are transforming the United Kingdom into “an Islamist Colony.”

A steady drum beat of anti-Muslim vitriol is visible on the Gatestone Institute site on almost any given day.

The website routinely portrays Muslim migrants and refugees as an existential threat to Europe and the United States, claiming that immigrants bring “highly infectious diseases,” genital mutilation practices, and terror to any nation that accepts them. The site spent years sharply criticizing the Obama administration for having a “traditional Muslim bias” against Christians.

The lurid headlines, which are translated into multiple languages and distributed widely through Gatestone’s social media page and its partners in conservative media, are rarely supported by the evidence.

Take the story this week about the migrant rape crisis in Germany. Penned by Gatestone “senior fellow” Soeren Kern, the piece lists recent rapes and sexual assaults in Berlin and other cities, attributing all the crimes to Muslim immigrants even though the story simultaneously concedes elsewhere that the attackers’ identities have not been revealed by German police.

Similar farfetched tales about the threat posed by Muslim migrants in Europe has been debunked. Last year, Gatestone claimed that officials in Germany were seizing homes to be provided to “hundreds of thousands of migrants from Africa, Asia, and the Middle East.” The racially tinged article wasn’t remotely true. German media noted that under Hamburg’s strict housing laws, a single house in the city was placed into temporary trusteeship after it remained vacant. “Refugees did not play a role in the district’s decision,” noted Correctiv, a local watchdog group.

The fact-checking website Snopes has found multiple false viral stories originating with Gatestone. For instance, the site claimed falsely that in London — called “Londonistan” in the piece — 423 mosques were built “on the sad ruins of English Christianity,” as 500 churches closed. But the story cherry-picked the data to ignore hundreds of newly opened churches.

Many of the fake stories have percolated into mainstream U.S. politics. Gatestone was largely responsible for the false claim that there are “no-go zones” through Belgium, the Netherlands, France, Sweden, and other European states where Muslim immigrants have set up a parallel society in which local police no longer enforce the law.

The idea infiltrated the 2016 Republican primary, as Bobby Jindal, Ted Cruz, and Donald Trump repeated the uninformed “no-go zone” claim (to the later great embarrassment of U.S. Ambassador to the Netherlands Pete Hoekstra). While many conservative outlets eventually parroted the myth, Gatestone had pushed the idea since 2012 and has published dozens of pieces on the claim since.

As The Intercept previously reported, Gatestone is largely funded by Nina Rosenwald, the heir to the Sears, Rosebuck & Company department store fortune. Though the Rosenwald family was once a champion of Jewish refugees during World War II, Rosenwald has financed a number of efforts to vilify Muslims attempting to escape bloodshed in Africa and the Middle East.

Billionaire heiress Rebekah Mercer, a donor to various far-right causes as well as the Trump campaign, was listed as a Gatestone board member in April 2017, according to the foreign policy-focused website LobeLog. After LobeLog inquired about Mercer joining the board, Gatestone scrubbed any information about her from the site. Donor rolls obtained by LobeLog showed that the Mercer Family Foundation gave $150,000 total to Gatestone in 2014 and 2015.

Bolton has made no effort to conceal his close ties to the forces of Islamophobia. As reporter Eli Clifton noted, Bolton wrote the foreward to a book authored by Robert Spencer and Pamella Geller, two American activists that have led the charge in protesting mosques and spreading conspiracy theories about the threat posed by Islam.

The hate has in someways been a lucrative career path. Bolton, for his efforts, has collected at least $310,000 from the Gatestone Institute in payments, according to publicly available tax disclosures.

The Gatestone website has not only influenced U.S. politics, but also attempted to influence recent European elections in France, the Netherlands, Austria, and Germany. The site has promoted far-right, anti-Muslim populists running for office across the continent. In Germany, politicians from Alternative for Germany, or AfD, the rabidly anti-immigrant far-right party, regularly shared Gatestone articles on Facebook and Twitter during the election last year. Geert Wilders, the Dutch anti-Muslim firebrand, is a guest author on the site.

And now its chair will be the national security adviser to the president of the United States.

Update: March 23, 2018
This story has been updated to include information about Rebekah Mercer’s reported role on Gatestone’s board as well as about donations from her family foundation to the group.

Top photo: U.S. Ambassador to United Nations John Bolton speaks at the National Oversight and Government Reform Committee on moving the U.S. Embassy in Israel to Jerusalem on Capitol Hill on Nov. 8, 2017 in Washington, D.C.