The MEK, an ex-terrorist group pushing regime change in Iran, aligns with D.C.’s most hawkish denizens — and also cuts fats checks for them. 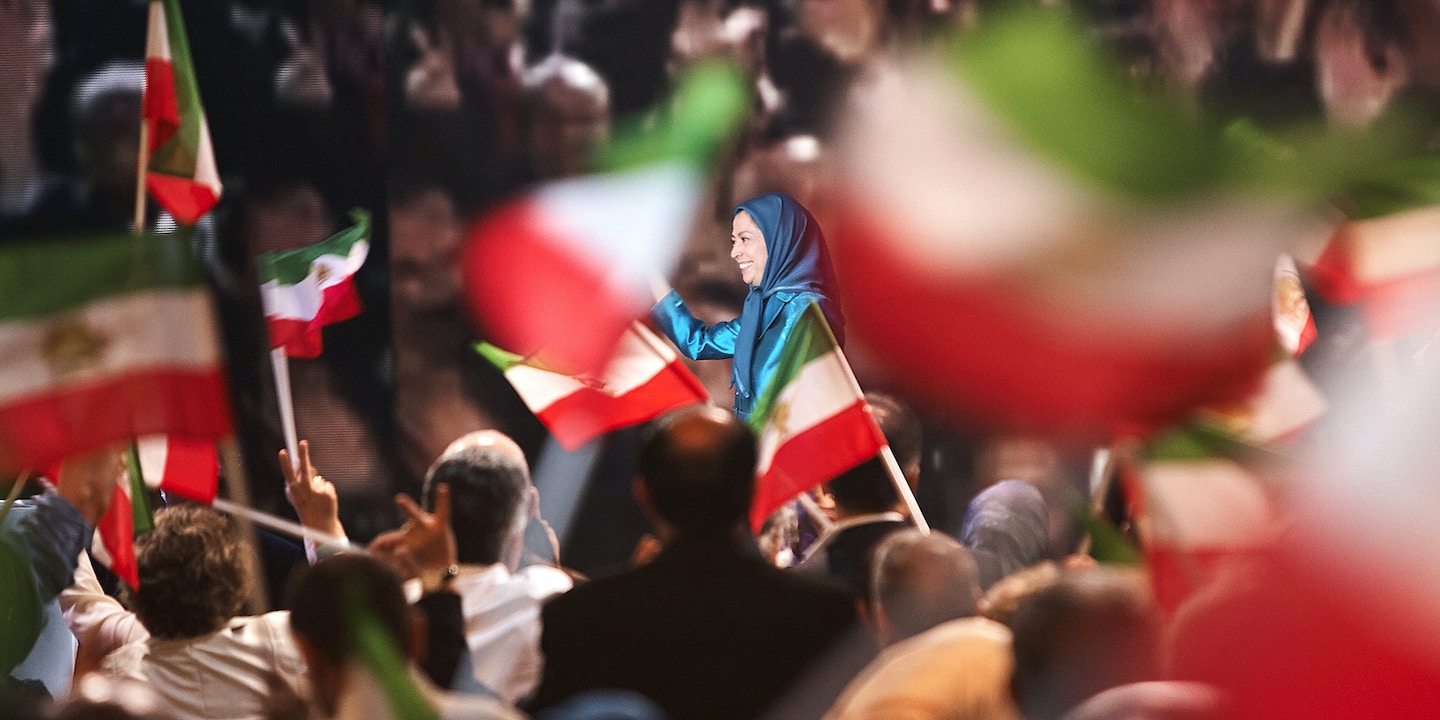 What were a Saudi prince, a former Republican House Speaker and a former Democratic vice-presidential candidate doing together in a suburb of Paris last weekend?

Would you be surprised to discover that Prince Turki Bin Faisal, Newt Gingrich and Joe Lieberman were speaking on behalf of a group of Iranian exiles that was officially designated a “Foreign Terrorist Organization” by the United States government between 1997 and 2012?

Iran hawks long ago fell head over heels for the Mojahedin-e Khalq, known as the MEK, and loudly and successfully lobbied for it to be removed from the State Department list of banned terror groups in 2012. Formed in Iran in the 1960s, the MEK, whose name translates to “Holy Warriors of the People,” was once an avowedly anti-American, semi-Marxist, semi-Islamist group, pledged to toppling the U.S.-backed Shah by force and willing to launch attacks on U.S. targets. The MEK even stands accused of helping with the seizure of hostages at the U.S. embassy in Tehran; the group condemned the hostages’ release as a “surrender” to the United States. But after the Iran’s clerical rulers turned on the group in the early 1980s, its leaders fled the country and unleashed a series of bombings across Iran.

These days, the organization — run by husband and wife Massoud and Maryam Rajavi, though the former’s whereabouts are unknown and he is rumored to be dead — claims to have renounced violence and sells itself to its new American friends as a 100 percent secular and democratic Iranian opposition group. The biggest problem with the MEK, however, is not that it is a former terrorist organization. Plenty of violent groups that were once seen as “terrorists” later abandoned their armed struggles and entered the corridors of power — think of the Irish Republican Army or Mandela’s African National Congress.

Nor is it that the MEK lacks support inside of the Islamic Republic, where it has been disowned by the opposition Green Movement and is loathed by ordinary Iranians for having fought on Saddam Hussein’s side during the Iran-Iraq war.

Rather, the biggest problem with U.S. politicians backing the MEK is that the group has all the trappings of a totalitarian cult. Don’t take my word for it: A 1994 State Department report documented how Massoud Rajavi “fostered a cult of personality around himself” which had “alienated most Iranian expatriates, who assert they do not want to replace one objectionable regime for another.”

You think only people inside of dictatorships are brainwashed? A 2009 report by the RAND Corporation noted how MEK rank-and-file had to swear “an oath of devotion to the Rajavis on the Koran” and highlighted the MEK’s “authoritarian, cultic practices” including ‘mandatory divorce and celibacy” for the group’s members (the Rajavis excepted, of course). “Love for the Rajavis was to replace love for spouses and family,” explained the RAND report. Iraqi security forces enter through the main gate of Camp Ashraf in Khalis, north of Baghdad, Iraq in 2012.

You think gender segregation inside of Iran is bad? At Iraq’s Camp Ashraf, which housed MEK fighters up until 2013, lines were “painted down the middle of hallways separating them into men’s and women’s sides,” according to RAND, and even the gas station there had “separate hours for men and women.”

You might understand why a Saudi prince, former New York mayor Rudy Giuliani, or uber-hawk and former Bush administration official John Bolton — who all attended the Paris rally — might be willing to get behind such a weird collection of fanatics and ideologues. But what would make a liberal Democrat from Vermont such as Howard Dean — who has suggested Maryam Rajavi be recognized as the president of Iran in exile — want to get into bed with them? Or Georgia congressman and civil rights hero John Lewis, who spoke out in favor of the MEK in 2010?

Could it be because of the old, if amoral, adage that “the enemy of my enemy is my friend”? Perhaps. Could it be the result of ignorance, of senior U.S. figures failing to do due diligence? Maybe.

Or could it be a consequence of cold, hard cash? “Many of these former high-ranking U.S. officials — who represent the full political spectrum — have been paid tens of thousands of dollars to speak in support of the MEK,” revealed a wide-ranging investigation by the Christian Science Monitor in 2011.

In Washington, D.C., money talks. Whether you’re a Democrat like Dean or a Republican like Bolton, a former head of the CIA like Porter Goss or an ex-head of the FBI like Louis Freeh, what seems to matter most is that the MEK can cut fat checks.

Take Gingrich, who once lambasted Barack Obama for “bowing to the Saudi king” but has himself been caught on camera bowing to Maryam Rajavi. The former House speaker bizarrely compared Rajavi to George Washington in his speech in Paris over the weekend.

Or Giuliani, “America’s Mayor” and self-styled anti-terror hawk, who nevertheless has had no qualms accepting thousands of dollars since 2010 to shill for a group that murdered six Americans in Iran in the mid-1970s; joined with Saddam Hussein to repress Iraq’s Kurds in the early 1990s; allegedly worked with Al Qaeda to make bombs in the mid-1990s; and fought against U.S. troops in Iraq in 2003.

Have these people no shame? To quote Suzanne Maloney, an Iran analyst at Brookings and a former adviser to the State Department: “How cheaply Gingrich/Guiliani/Bolton/Lieberman value their own integrity to sell out to MEK cult.”

Meanwhile, regime change in Tehran is very much back on the agenda in Donald Trump’s Washington. Candidate Trump, who blasted George W. Bush’s Middle East wars of aggression, has been replaced by President Trump, who appointed Iran hawks such as James Mattis and Mike Pompeo to run the Pentagon and the CIA, respectively; counts MEK shills such as Giuliani and Gingrich among his closest outside advisers; and appointed Elaine Chao, who took $50,000 from the Rajavis for a five-minute speech in 2015, to his cabinet.

Let’s be clear: The Trump administration, the Saudis and the Israelis — who have “financed, trained and armed” the MEK in the past, according an NBC News investigation — are all bent on toppling Iran’s clerical rule; they long for a bad sequel to the Iraq war. And Maryam Rajavi’s MEK is auditioning for the role of Ahmed Chalabi’s Iraqi National Congress: The group’s 3,000-odd fighters, according to former Democratic senator-turned-MEK-lawyer Robert Torricelli last Saturday, are keen to be the “point of the spear.”

That way madness lies. Have U.S. political, intelligence, and military elites learned nothing from their Mesopotamian misadventure and the disastrous contribution of Iraqi exiles such as Chalabi? Well, the brainwashed fanatics of the MEK make the INC look like the ANC.

It is difficult, therefore, to disagree with the verdict of Elizabeth Rubin of the New York Times, who visited the MEK at Camp Ashraf back in 2003 and later “spoke to men and women who had escaped from the group’s clutches” and “had to be reprogrammed.” The MEK, warned Rubin in 2011, “is not only irrelevant to the cause of Iran’s democratic activists, but a totalitarian cult that will come back to haunt us.”

Top photo: Mariam Rajavi speaks at the annual meeting of the Mojahedin-e Khalq at the Villepinte exhibition center near Paris on July 1, 2017. International political leaders also made speeches to support her.