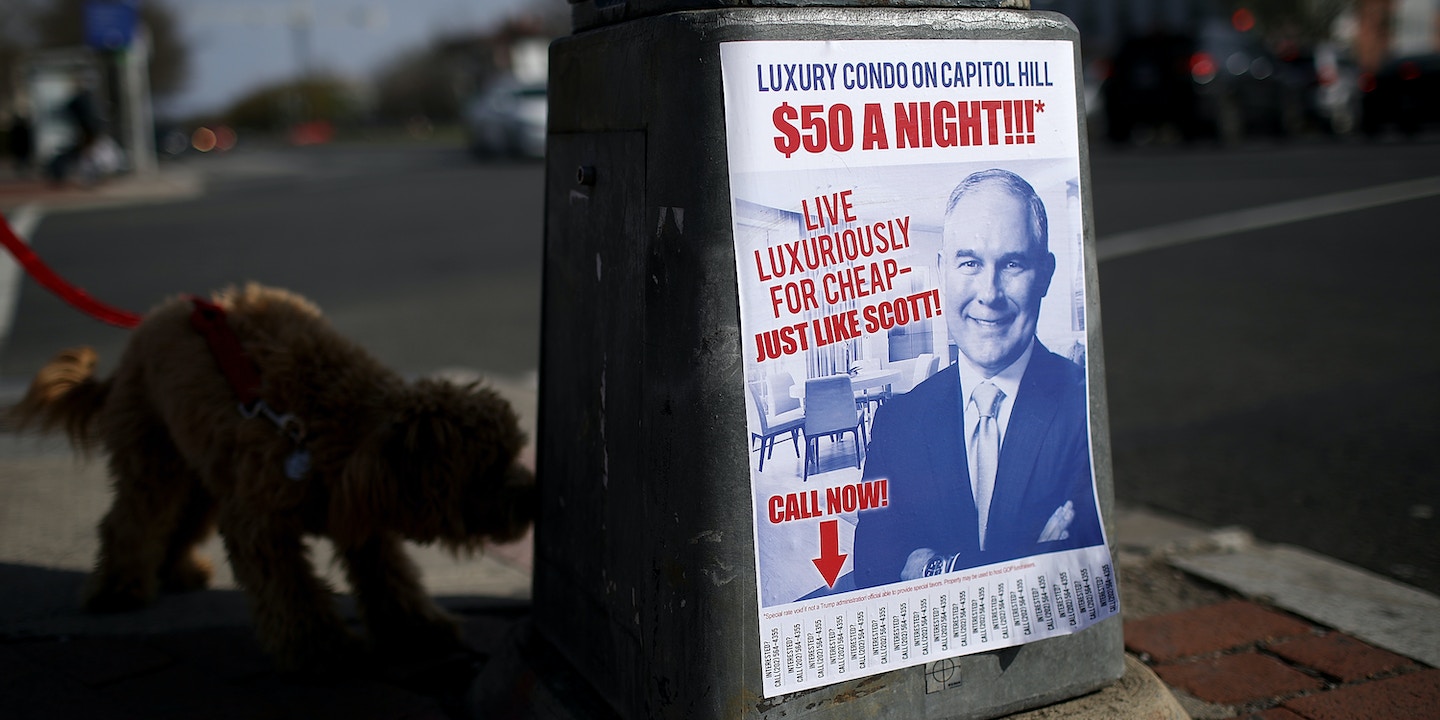 Along with disgraced lobbyist Jack Abramoff, Hart was part of DeLay’s “kitchen cabinet,” a group of lobbyists who helped Republicans raise money, formulate strategy, and exert pressure in Congress. Back then, Hart, who came to D.C. from Oklahoma with the Reagan administration, was “the man corporations call when they’re having trouble with labor unions,” as the Washingtonian described him in 2007.

Hart was also DeLay’s personal attorney and — with the same enterprising spirit that seems to have inspired the condo deal — offered his legal services to DeLay for free. According to Steven Brill’s 2003 book, “After,” Hart made this arrangement with DeLay and other members of Congress as a “loss leader” — a marketing term for offerings that are sold below cost because they lead to other business opportunities. In the case of Pruitt, many business opportunities have indeed followed the rental last year of Hart’s prime D.C. location. By his own admission, the Environmental Protection Agency administrator, whose job is to protect human health and the environment, went to Morocco in December to promote the export of American liquefied natural gas. Cheniere, an energy company that Hart’s firm represented, was the only exporter of liquefied natural gas at the time. Morocco is the only African country with which the U.S. has a free trade agreement. The country recently built a liquefied natural gas terminal. In a televised interview, Pruitt told Fox News that Cheniere is no longer a client of Williams & Jensen.

But it’s not just Cheniere that had interests in the Moroccan trip. Williams & Jensen currently lobbies for Exxon Mobil’s natural gas interests, though not before the EPA, according to a company spokesperson.

At least 10 companies have interests in the export of liquefied natural gas. Among them is Kinder Morgan, which owns three of the pipelines supplying Cheniere’s liquefied natural gas operation, according to a presentation the company’s executives made in June of last year. The company, which has already greatly benefited from President Donald Trump and Pruitt’s rollback of environmental regulations, is scheduled to open its own liquefied natural gas export facility in Georgia in May 2019. Pruitt met with representatives from Kinder Morgan on December 7, two days before the trip to Morocco, according to Pruitt’s public EPA calendar and a letter that Democratic Sen. Sheldon Whitehouse sent to Pruitt last week.

Pruitt has also met several times with Chevron, which also has a stake in the project, according to the Cheniere presentation.

The EPA did not respond to emails requesting for comment. But Pruitt told Fox News that the media is focused on this trip because of the effectiveness of his regulatory reform efforts. And an EPA spokesperson insisted that the apartment — for which he paid $6,100 over six months, or about $1,000 a month — was market rate. On Saturday, Trump tweeted his support for this claim, writing that “Rent was about market rate, travel expenses OK. Scott is doing a great job!”

While Security spending was somewhat more than his predecessor, Scott Pruitt has received death threats because of his bold actions at EPA. Record clean Air & Water while saving USA Billions of Dollars. Rent was about market rate, travel expenses OK. Scott is doing a great job!

A spokesperson for Williams & Jensen provide the following statement by J. Steven Hart:

Williams & Jensen has always been committed to delivering exceptional client service with the highest ethical standards of professional conduct, so I take this matter very seriously and I regret that recent news reports could have created even a mere appearance that could call into question that forty year commitment. As I have stated previously, the condominium is not owned by Williams & Jensen, its partners, or any other employees of the firm, and any suggestion that Administrator Pruitt’s short-term rental of one of its bedrooms in 2017 resulted in undue influence for the firm or its clients with business before the EPA is simply false. I am confident in these facts, and certain that all fair and impartial assessments of the matter will conclude accordingly. Finally, I apologize to my wife, Vicki, whose fantastic career is being maligned unnecessarily.

Pruitt’s indebtedness to the oil and gas industry goes far beyond whatever warm feelings he had for the Harts based on their generous rental agreement. The EPA administrator’s political career in Oklahoma, where he was a state senator and attorney general, was widely supported by oil and gas companies. Marathon Petroleum, Devon Energy, Exxon Mobil, Phillips 66, Valero, and Chevron made contributions to at least one of his political campaigns and have current interests in liquefied natural gas.

Harold Hamm, another powerful Pruitt supporter, has a huge interest in natural gas. As outrage has spread about the condo deal, the Morocco trip, and other scandals, Hamm, the chair and CEO of Continental Resources and a former Trump energy adviser, reportedly encouraged Trump not to fire Pruitt last week. In August, Hamm increased his stake in natural gas in anticipation of a surge in exports. Hamm did not immediately respond to a request for comment.

If Hamm has his way and Pruitt stays, the administrator may soon take more international business trips. His staff is already planning jaunts to Japan and China, according to Whitehouse’s letter. The countries are, respectively, the first and third importers of liquefied natural gas in the world.

But it’s unclear whether Pruitt can hold on to his office long enough to make the trips. While the furor over the EPA administrator continues, it’s worth remembering what happened to DeLay — another Republican who opposed government regulation, was embroiled in multiple ethics scandals, and benefited from J. Steven Hart’s largesse. DeLay resigned from Congress in 2006 and was convicted of money laundering. Though his conviction was eventually overturned on appeal, the scandal ended his political career.