Mike Pompeo Could Go Down If Senate Democrats Decide to Fight

Mike Pompeo’s nomination for secretary of state has galvanized progressive groups into action. 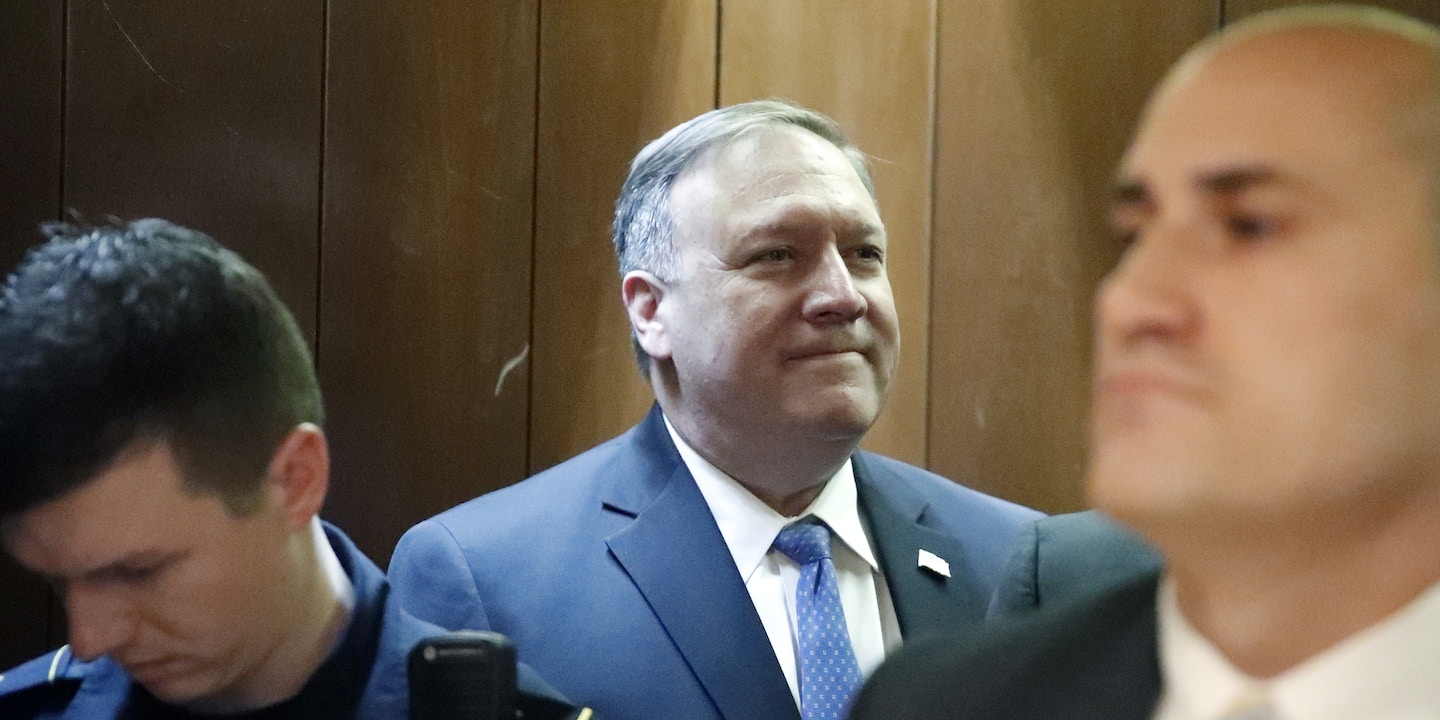 Democratic activists around the country have become energized by the nomination of Mike Pompeo as the new secretary of state, kicking off a bout of organizing around foreign policy that has little precedent outside the lead-up to an imminent invasion.

The question now is whether that enthusiasm will transfer to Senate Democrats themselves, or whether they will usher him through as they did in January 2017 when he was confirmed as CIA director. Senate Minority Leader Chuck Schumer, D-N.Y., voted to confirm Pompeo last year.

Pompeo, a committed Islamophobe and war hawk, has galvanized opposition particularly for his hostility to the Iran nuclear deal, which Democrats see as a signature piece of the legacy of former President Barack Obama. Ripping up the deal, its advocates warn, would march the United States down a path that leads inevitably to war.

Pompeo, who previously represented Kansas in Congress, will appear before the Senate Foreign Relations Committee on Thursday, where Republicans hold a one-member advantage. But with Sen. Rand Paul, R-Ky., having already announced his opposition, that means a united Democratic front could reject Pompeo in committee.

A nominee can still be brought to the floor for a vote despite having been shot down in committee, but nobody has been successfully confirmed that way in at least 40 years. The last to try, coincidentally, was John Bolton in 2005, when the committee recommended against his appointment as U.N. ambassador. He was filibustered on the floor and ultimately snuck through as a brief recess appointment.

A loss in committee could make it easier for moderate Democrats to vote against Pompeo, argued Elizabeth Beavers, who handles national security and foreign policy for Indivisible, a syndicate of grassroots chapters that came together after the 2016 election to resist the Trump agenda. “It would change the calculus for senators on the floor,” said Beavers. Republicans would need every vote, including the ailing Sen. John McCain, R-Ariz., merely to get to a place where Vice President Mike Pence could break a 50-50 tie, if Democrats unite against Pompeo. (The National Interest has reported that not only will McCain vote, he will vote no.)

The selection of the uber-hawk Bolton to be national security adviser one week after Pompeo and Haspel’s nominations frightened people into action.

That Pompeo was nominated along with Gina Haspel has only added fuel to the opposition. Haspel, deputy director of the CIA, has been named to head the agency, but she was intimately involved with the Bush administration’s torture program. (Her confirmation hearing is expected to be scheduled later this month.) The selection of the uber-hawk Bolton to be national security adviser one week after Pompeo and Haspel’s nominations frightened people into action, said Stephen Miles, director of Win Without War. “When Donald Trump hired John Bolton, the fight over Mike Pompeo went from being about just another terrible Trump nominee to potentially the difference between going to war or not,” he said. “What we’re hearing from our activists and our partners are that people are fired up.” (Bolton’s first day in the White House was Monday.)

A survey of California voters provided to The Intercept found that two-thirds of those surveyed have an opinion on Pompeo, and among those who do, they disapprove of him by a nearly 2-to-1 margin. The survey was conducted by Public Policy Polling for the liberal group MoveOn.org. By a 14-point margin, those polled said they want the Senate to reject Pompeo and that they would reward Democrats in the fall if they vote against him.

Sen. Dianne Feinstein of California voted to confirm Pompeo for CIA director last year, taking heat back home. Facing a primary challenge, she’s under pressure to reject him this time around, and advocates are confident she’ll come around.

“This should be a no-brainer. Not only is it good policy for Sen. Feinstein to oppose a warmongering extremist as the next leader of our nation’s diplomats, it’s also smart politics,” said MoveOn spokesperson Karthik Ganapathy.

MoveOn is planning a rally at the Capitol at 5:00 p.m. on Wednesday, while a coalition of Indivisible groups, representing some 33,000 members, sent Feinstein a letter on Monday urging her to reject Pompeo and Haspel.

“We can’t block John Bolton, we can’t force Trump to stay in the [Iran] deal, but we can block Pompeo, who would enable Trump in shredding the deal up,” Beavers said.

The Pompeo nomination, Beavers said, has been a major focus for the local activist groups that operate under the Indivisible umbrella. And at least 178 national groups — representing everything from reproductive rights to the environment and beyond — have signed four separate letters of opposition. Petitions are everywhere, launched by J Street, CREDO, Indivisible, Win Without War, and the National Iranian American Council. CREDO has sent more than 4,000 calls to key senators.

To have an immediate impact, Democrats only need to stave Pompeo off until May 12, the next deadline for Donald Trump to review whether to reapply sanctions on Iran, a move that would go a long way toward violating the deal on the U.S. end. (Though, with his nomination in doubt, Pompeo is now privately telling moderate Democratic senators that maybe he’s not in favor of ripping up the Iran deal after all.)

Trump has previously refused to certify that Iran is complying with the terms of the deal, though there is widespread international agreement that, by and large, Iran is doing so. For Trump to put pen to paper in affirmation of an agreement he has called “the worst deal” in U.S. history, though, is a bit much for him.

Not certifying the deal has no practical implications, but reapplying sanctions that were waived as part of the 2015 agreement would fundamentally undermine it. Up until now, even with Trump as president, the sanctions have been waived in accordance with the deal. But if the U.S. does renege on the deal and slap Iran with the sanctions, Russia and the European nations that are also party to the deal have pledged to try to keep it alive, as an Iran with nuclear weapon is in none of their interests. For U.S. hawks bent on war, however, an Iran that pursues a nuclear bomb is useful as a rationale for the kind of bombing that Pompeo and other hawks on the right have long suggested would be appropriate to check Iran’s regional ambitions.

Most senators have been withholding their positions until testimony has concluded. But last January, 14 Democrats and one independent voted to confirm Pompeo. They are:

The votes of Kaine and Shaheen, who are on the Foreign Relations Committee, will be pivotal this time around.

Progressive Democrats in 2014 used their position on the Senate Banking Committee to block the potential nomination of Larry Summers as chair of the Federal Reserve, letting the White House know that he lacked the votes to move through the panel.

Pompeo — who is charming and erudite in private, belying the menacing worldview just below the surface — has already begun to woo the Democrats he’ll need and has met with King and Heitkamp, CNN reported.

The Democrats who voted to confirm Pompeo to his CIA post last year and were surprised at the backlash, as well as some of his supporters — including Warner — have announced their opposition this time around.

Pompeo’s charm offensive will take his reputation as a hawk straight on, according to a copy of his prepared testimony that was leaked to The Intercept and independently confirmed as authentic. “I know firsthand the painful sacrifices of our men and women in uniform,” Pompeo will testify. “So when journalists, most of whom have never met me, label me—or any of you—as ‘hawks,’ ‘war hardliners,’ or worse, I shake my head. There are few who dread war more than those of us who have served in uniform.” (For what it’s worth, this reporter has met Pompeo and found him to be affable, engaging and highly intelligent — and also an extreme hawk with a particularly rabid fixation on Iran.)

That preoccupation is evident in his prepared remarks, as he delves into the fringe conservative notion that Hezbollah is a threat not just to Israel but to the United States as well. “Iran’s activities in Syria, Iraq and Lebanon threaten the very existence of Israel, and the global reach of Hezbollah threatens us right here in the homeland,” he will say in his testimony.

During the debate over the Iran deal, Pompeo suggested that striking Iran’s nuclear facilities would be simple. “It is under 2,000 sorties to destroy the Iranian nuclear capacity. This is not an insurmountable task for the coalition forces,” he said in 2014.

In the same breath, during his testimony, he will promise to work with allies to fix rather than scrap the Iran deal. “If confirmed, it will be an immediate personal priority to work with those partners to see if such a fix is achievable,” he’ll pledge, though there is little doubt what he’ll conclude after his investigation.

He made a similar pledge to the Senate before being confirmed as CIA director, promising to evaluate the Iran deal based on the objective evidence and intelligence presented to him. It was a lie. Instead, he dismissed what analysts found. “Good,” he told the analysts who informed him Iran appeared to be complying. “But we know they’re cheating anyway—we’re just not seeing it.”

The challenge for Senate Democrats will be to see through the charm for who Pompeo is. He doesn’t make it hard, but they’ll have to look to see it.

This story was updated to include a leaked copy of Pompeo’s prepared remarks for Thursday’s hearing.

Top photo: President Donald Trump’s nominee for the next secretary of state, Mike Pompeo, center, stands in an elevator after a meeting with Sen. Angus King, I-Maine, on Capitol Hill on April 9, 2018 in Washington.