In DeKalb County, Georgia, bus drivers who organized their own work stoppage last week were met with public condemnation and immediate firings. 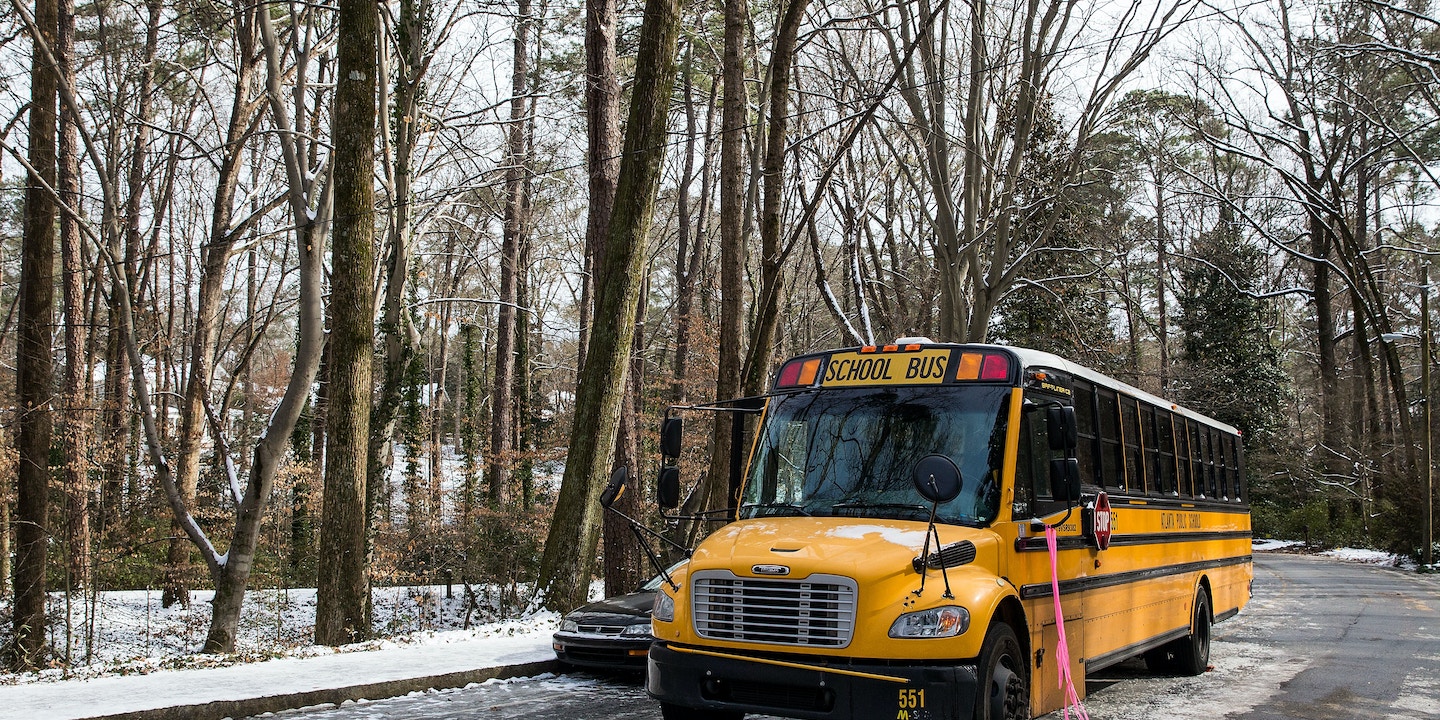 The red-state school uprising is spreading to educators around the country, with teachers in Colorado and Arizona now planning walkouts to demand better treatment from state and county governments. But the widespread public support that has helped carry the teachers to victories so far has been less present for blue-collar workers following in their footsteps. In Georgia, bus drivers who organized their own work stoppage last week were met with public condemnation and immediate firings.

On Thursday, the same day that the votes in favor of a walkout were tallied in Arizona, nearly 400 school bus drivers in DeKalb County, Georgia, stayed home from work, staging a “sickout” to protest their low salaries and meager benefits.

Whether the school bus drivers can succeed in winning their demands and maintaining broad popular support remains to be seen, but the protest provides an important test case on whether these teacher movements will lead to a broader working-class uprising or stay limited to organizing among a narrower band of white-collar professionals. The bus drivers are not building their case around the idea that their unique talents merit greater monetary reward, but that they simply need and deserve to be treated more fairly.

Bus drivers in DeKalb County have been raising concerns about their working conditions for the last several years, and since early March, driver representatives have been meeting with district officials to discuss their grievances. Among their list of demands are pay increases, better health insurance, better retirement plans, and a call to be reclassified as full-time employees rather than part-time workers.

A sickout is when a group of workers call in sick en masse to protest, but also to avoid a formal strike that may be illegal. Two years ago, educators in Detroit staged large, mass-coordinated sickouts, shutting down more than half of the public schools in their city.

The bus drivers’ protests last week did not lead DeKalb County’s school district to shutter its schools. But on Thursday, 42 percent of the district’s bus drivers did not show up to work, causing disruption and delays. DeKalb Public School officials called for transportation help from outside the district, the bus drivers who did show up were asked to take on second routes, and parents had to find last-minute transportation alternatives.

The bus driver protest continued on Friday, with 25 percent of bus drivers refusing to show up for work. Organizers have called for the sickout to continue through Monday.

While the teachers strikes in West Virginia, Oklahoma, and Arizona have boasted the vocal support of local school boards and superintendents, the school district leadership in DeKalb County has offered no such solidarity to the school bus drivers. In fact, seven bus drivers were fired on Thursday, identified as “sickout ringleaders.”

“We started with those who were obviously, we have evidence that they were orchestrating or in many ways organizing this event, and that is illegal,” said DeKalb County Schools Superintendent Stephen Green on Thursday to CBS46, a local news station. A spokesperson for DeKalb Public Schools did not return The Intercept’s request for comment.

At a press conference held on Thursday, Green emphasized that the sickout “is not acceptable and will not be tolerated,” and pointed to a state law that says it’s illegal for public employees in Georgia to “promote, encourage, or participate in any strike.” Green said DeKalb Public Schools would be “well within its rights to take adverse employment action” against any driver participating in a sickout, adding that for every day drivers miss due to the sickout, he would be requiring a doctor’s note as proof that they were actually ill.

In stressing that the drivers who protested their working conditions were putting children in danger, Green echoed the recent comments of Kentucky Gov. Matt Bevin, who said teachers protesting at the state capitol likely contributed to an unsupervised child getting sexually assaulted at home. (Bevin later apologized for these remarks.) Bus drivers dismissed the superintendent’s assertion, emphasizing that student safety is paramount and that parents had been notified in advance of their protest. Families were notified earlier in the week by school district robocall and email that there might be a three-day school bus strike, and that any student who arrived late would not be punished.

One of the seven fired drivers, Marion Payne, told the Atlanta Journal-Constitution that police officers from the school district dropped off a termination letter at his home Thursday night. Payne, who had helped pass out flyers for the sickout, had been a school bus driver for five years.

Shelia Bennett, another fired bus driver, pushed back on the narrative that she was a ringleader who organized a strike. “I would never organize a strike when I know this is a right-to-work state, and we cannot strike because we don’t have a union,” she said to Atlanta’s Fox 5 news station. Bennett has worked as a driver for the district for more than a decade, earning a salary of just $24,000 this year. She said she “never in a million years” expected she’d be terminated, and pointed out that she’s never had any sort of disciplinary issue in the past.

BREAKING: Shelia Bennett denies she organized a strike among DeKalb County bus drivers. She says she loves being a bus driver and never expected the sick-out would end with her termination. Details tonight on Fox 5 News Edge. @FOX5Atlanta @DeKalbSchools pic.twitter.com/fXQUL4HANE

In the red states where teachers movements have erupted, school bus drivers have helped support the educators protesting their working conditions. In Oklahoma, for example, while teachers walked off their jobs to protest at the state capitol for nine days, bus drivers prepared and drove free meals to more than 100 designated pick-up points to make sure that students were not left hungry. Some school bus drivers even helped transport teachers to the state capitol.

The school bus driver protest comes on the heels of a successful strike organized by Atlanta paratransit drivers, who staged the first one-day protest on February 14. They were organizing against what they called unfair working conditions and safety concerns for disabled and elderly passengers. The second one-day strike was threatened to be held on April 18, but this effort was called off at the last minute after MARTA Mobility management agreed to make some compromises in their contract negotiations.

Top photo: An abandoned Atlanta Public School bus sits in the ice on Howell Mill Road during the winter storm on Jan. 29, 2014, in Atlanta.