Mohammed bin Salman was celebrated by Silicon Valley and Hollywood titans during his U.S. visit. They ignored his role in the slaughter in Yemen. I know you’ve been busy wining and dining the crown prince of Saudi Arabia on his recent tour of the United States, but have you got a spare few minutes for me? I wanted to ask you a few questions.

In fact, I had planned to reach out to you much sooner, but I got diverted last week writing an open letter to apologists for another brutal Arab dictator: Bashar al-Assad of Syria. Unlike those apologists, however, who tend to be a motley and mostly fringe collection of bloggers and conspiracists with very little mainstream credibility, you are a diverse group that wields significant power and influence. Your ranks are filled with presidents and prime ministers, senators and CEOs, TV anchors and op-ed columnists — most of whom seem convinced that the blood-stained MBS is a political revolutionary, a social reformer, and a Muslim moderate.

So here are my questions: Have you heard of Yemen? Does it not bother you in the slightest that the de facto ruler of one the richest countries in the Arab world has been bombing and besieging the poorest country in the Arab world for the past three years? Have you no shame? No remorse? Don’t any of you regret hosting, entertaining, and joking with a Middle East despot who has shed so much innocent blood?

To be clear: I did not expect those of you who are members of the Trump administration, the defense industry, the oil industry or, for that matter, the Bush family, to do anything other than flatter and fawn over MBS on his recent visit to these shores. But what of you liberal apologists for the Saudi dictator-in-waiting? Why did so many of you fall over one another to get a meet-and-greet with MBS? From major Hollywood bosses like Brian Grazer and Bob Iger, to Dwayne “The Rock” Johnson? From the tech titans of Silicon Valley like Tim Cook, Jeff Bezos and Evan Spiegel, to the heads of Harvard and MIT? From “liberal interventionists,” such as Bill Clinton and John Kerry, to liberal capitalists, such as Lloyd Blankfein and Michael Bloomberg?

Look, I get why so many of you have fallen for him: The tall, charming, suited-and-booted MBS seems to be saying and doing all the right things. He does sound like a reformer. From June, women will be allowed to drive in Saudi Arabia  — hurrah! Cinemas are opening inside the kingdom — yay! Cirque du Soleil is heading for Riyadh later this year — mabruk!

But what about “the forgotten war” in Yemen, as Amnesty International calls it? Just how much forgetting did you have to do as you lined up to shake the prince’s blood-stained hands, or delivered encomiums to him on the op-ed pages of the New York Times and the Washington Post? Did any of you, over cocktails and canapés with MBS, denounce his decision to blockade Yemen, which has caused a “countrywide famine” and raised the “danger of mass starvation”? Did any of you challenge him on his role in starting and prolonging a conflict that that has resulted in the “world’s worst” cholera outbreak since records began? United Nations officials have described the situation in Yemen as “the worst manmade humanitarian crisis of our time.” Yes and the “man” who “made” it is MBS — he was, lest we forget, the Saudi defense minister in March 2015, and, as the New York Times has reported, “took the lead, launching the war… without full coordination across the security services.”

So what excuse can you offer for your silence? For your complicity even? Listen to Sarah Leah Whitson, the director of the Middle East and North Africa division of Human Rights Watch. Those of you pictured smiling and laughing with the Saudi crown prince, she told me, are guilty of “either sinister, craven hypocrisy over what Saudi Arabia is doing in Yemen … or of ignorance from people who have a responsibility not to be ignorant when their pictures are being used to legitimize someone who is responsible for dropping cluster bombs on schools.”

Yes, cluster bombs. Banned under international law, but repeatedly deployed by the Saudi-led coalition in Yemen. Don’t you think that was maybe an issue worth addressing with the Saudi defense minister over coffee at Starbucks?

Here’s another question: Have any of you spoken out since Sunday evening, when the Saudi-led coalition bombed a wedding party in northern Yemen, killing at least 20 people and wounding more than 50 others? “Most of the dead were women and children,” reported the Associated Press. The bride was among those killed while the groom arrived to the hospital with “shrapnel scattered across his body.” According to AP, “Footage that emerged from the scene of the airstrike shows scattered body parts and a young boy in a green shirt hugging a man’s lifeless body, screaming and crying.” 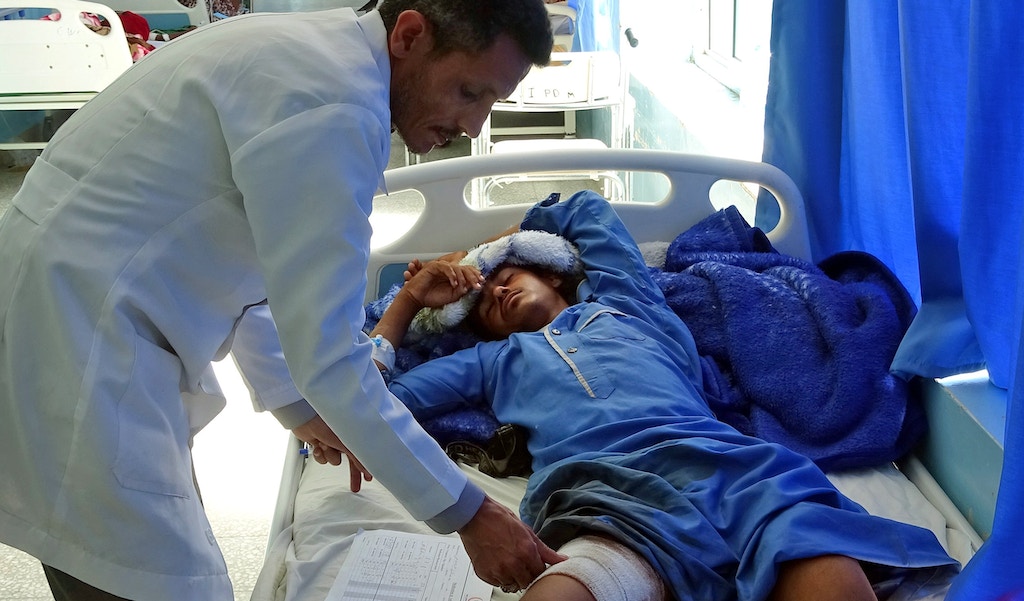 A Yemeni man, injured in an attack on a wedding party, receives treatment at a hospital in Yemen’s Hajjah province on April 23, 2018. Dozens of civilians were killed and wounded in the bombing, local officials said, with Houthi rebels blaming the Saudi-led military coalition.

Do you expect us to believe that this barbaric attack on a Yemeni wedding was a mistake? A mere targeting error? Is that how you’re able to get to sleep at night? But how then do you explain a similar attack on a funeral ceremony in the rebel-held capital of Sanaa, in October 2016, which left at least 155 people dead and more than 500 injured? Another accident, you say? Not quite. As U.N. monitors noted in a (leaked) report to the U.N. Security Council, there were two airstrikes, the second of which occurred “three to eight minutes after the first” and killed “the already wounded and the first responders,” and “in respect of the second airstrike … the Saudi Arabia-led coalition violated its obligations in respect of hors de combat and the wounded in this ‘double tap’ attack.”

So you may want to continue to look away, to turn a blind eye, but the reality is that, since 2015, the Saudi-led coalition has killed thousands of defenseless civilians in Yemen by bombing not just weddings and funerals, but also schools, hospitals, markets, factories, power plants, bridges, ports, and residential areas.

These are war crimes, plain and simple. And, yes, before you say it, let me concede that the Houthi rebels have also committed horrific war crimes. But human rights groups and U.N. investigators agree that it is your friend, your hero, MBS, the great reformer, who is responsible for the vast majority of the unlawful killings in Yemen.

Why does none of this seem to bother you? And if these are not war crimes, then what are they? What value does such a term have if it doesn’t extend to the massacre of a bride and her wedding party? I can’t help but note that many of you supported the U.S.-led bombing of Syria earlier this month as a way of trying to deter Assad’s air force from committing crimes against humanity; as a way of trying to protect Syrian civilians from being killed, maimed, and gassed. Why do you (rightly) deem the bombs dropped by Assad on Syrian schools and hospitals to be violations of international law, but not the bombs dropped by MBS on Yemeni schools and hospitals? Why are you so outraged by the Syrian president’s use of banned weapons, but not by the Saudi crown prince’s use of banned weapons? Do the lives of innocent Yemenis not matter to you? Do they not register on your moral radar?

“Ah, but you can’t compare Syria to Yemen,” I hear some of you say. “They’re not the same.” Maybe not, but they do have much in common. The two Middle East conflicts “are on the same level,” says Whitson of Human Rights Watch, “in terms of comparing the … wildly indiscriminate and reckless bombardment that makes no effort to distinguish between civilians and combatants.” Then there is the ongoing Saudi-led blockade of Yemen, she adds, which is “inhuman” and an “exemplar action of collective punishment.”

Earlier this year, the U.N.’s humanitarian chief said Yemen “looks like the apocalypse.” Unless the situation on the ground changes, he added, “We’re going to have the world’s worst humanitarian disaster for 50 years.”

But, hey ho, MBS gave citizenship to “Sophia,” the female robot, and is going to let women drive; he hosted Toby Keith and screened “Black Panther“; he wants to part-privatize Saudi Aramco and build a high-tech city in the desert. He also wants to carry on buying U.S. weapons and has recognized Israel’s “right” to a homeland in the Middle East.

So who cares about Yemen, right? Isn’t that your calculation? To hope that no one pays attention to the thousands dying and millions starving while you continue to heap praise and plaudits on their Saudi oppressor?

What else can I say? You are accomplices to a war criminal.