Albert Kelly, a longtime associate of EPA Administrator Scott Pruitt, was overseeing the Superfund program. Last year, he was banned for life by the FDIC. 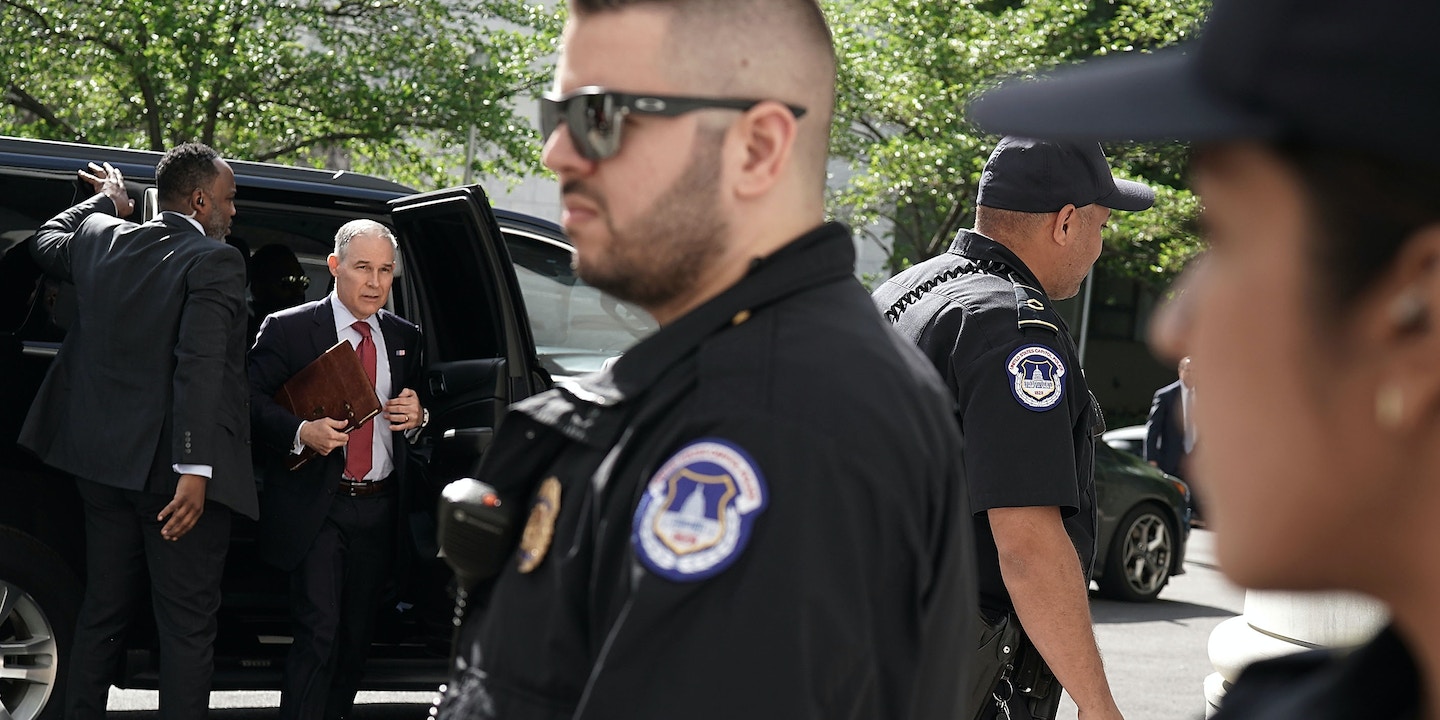 Albert Kelly, a senior adviser to Scott Pruitt at the Environmental Protection Agency, resigned Tuesday. Kelly, who was overseeing the agency’s Superfund program, left amid questions about his banking career. Pasquale “Nino” Perrotta, Pruitt’s head of security, also abruptly resigned, leading many to question whether Pruitt would be next.

As The Intercept reported in December, Kelly was the chair of SpiritBank in Bristow, Oklahoma, until he was banned for life from the banking industry by the Federal Deposit Insurance Corporation. Kelly, or “Kell” as he’s known by his friends, had provided several loans to Pruitt, including mortgages and funding for his share of a Triple-A baseball team, the Oklahoma City RedHawks. While Kelly was its chairman, SpiritBank became financially unstable and unable to pay back most of $30 million it received from the federal Troubled Asset Relief Program.

An FDIC consent order with SpiritBank also shows that in 2012 the bank agreed to several improvements to its practices that had come under scrutiny, including loans to bank executive officers, directors, and principal shareholders.

In addition to making loans to Pruitt, SpiritBank has loaned money to Kenneth Wagner, another senior adviser at the EPA. Wagner, who also hails from Oklahoma and is a longtime business associate of Pruitt, received four mortgages from SpiritBank. SpiritBank also financed Pruitt’s and Wagner’s purchase of an Oklahoma City home from a lobbyist, according to the New York Times.

The FDIC declined to explain exactly why Kelly was banned from banking. In January, Sen. Elizabeth Warren, D-Mass., asked Kelly to explain the reasons for the ban, and last week, Reps. Don Beyer and Gerry Connolly, both Democrats from Virginia, also asked for an investigation of Kelly.

When asked, during a House hearing last week, why Kelly was banned from banking, Pruitt said, “I’m not standing in the way of Kelly providing that information. I would encourage him to do so.”

Instead of providing the information, Kelly resigned. In an EPA statement on Kelly’s departure, Pruitt said, “Kell has served in a way that puts the needs of the American people and communities first, while respecting the work committed to by responsible parties. He has helped EPA professionals find solutions to moving languished sites down the path to clean up including San Jacinto in Texas, Portland Harbor in Oregon, and West Lake in St. Louis.”

Pruitt’s statement went on to say that Kelly’s “role will be greatly augmented by Peter Wright, who has been nominated as the Associate Administrator in the Office of Land and Emergency Management.” Wright, now managing counsel at DowDupont, is awaiting a confirmation hearing.

Kelly was always an odd choice to run the Superfund program. A banker with a law degree and a cattle ranch, he had no previous experience with environmental issues. Kelly has a stake in several businesses, including a steel company with which Wagner was affiliated as of August 2017.

And even while he oversaw the federal program that remediates some of the country’s most polluted sites, Kelly’s current investments include three companies associated with Superfund sites — ConocoPhillips, Lockheed Martin, and Phillips 66 — according to his financial disclosure form. Kelly had also leased some of his land for oil and gas production.

Though Kelly has yet to explain his ban from banking, he has reportedly listed some of his reasons for leaving the EPA — including that he was sick of being questioned about the FDIC ban and that he didn’t need the job. Kelly certainly didn’t need the salary. According to his financial disclosure form, he has millions of dollars in assets and holdings. And, though he can’t return to his last profession, he has plenty of property in Oklahoma.

In April, 64 House Democrats called on Trump to fire Pruitt. “A man under numerous investigations both for ethical concerns and wasteful spending, who has actively moved to undermine environmental rules and regulations at industry request, is antithetical to the job of EPA Administrator.”

One week ago @GerryConnolly and I sought an investigation of Scott Pruitt's friend Albert Kelly, a banned banker with no experience in environmental protection whom Pruitt put in charge of Superfund.

Today Kelly resigned. Pruitt should be the next to go. pic.twitter.com/HJJuNJichA

Top photo: U.S. Environmental Protection Agency Administrator Scott Pruitt, second left, arrives to testify at a hearing before the Environment Subcommittee of the House Energy and Commerce Committee on April 26, 2018 on Capitol Hill in Washington, D.C.