A Pro-Choice Woman Is Running Against a Male Democrat Who Voted to Restrict Abortion. Why Are Women’s Groups Silent?

Kara Eastman’s pro-choice beliefs aren’t enough to convince national groups to back her. 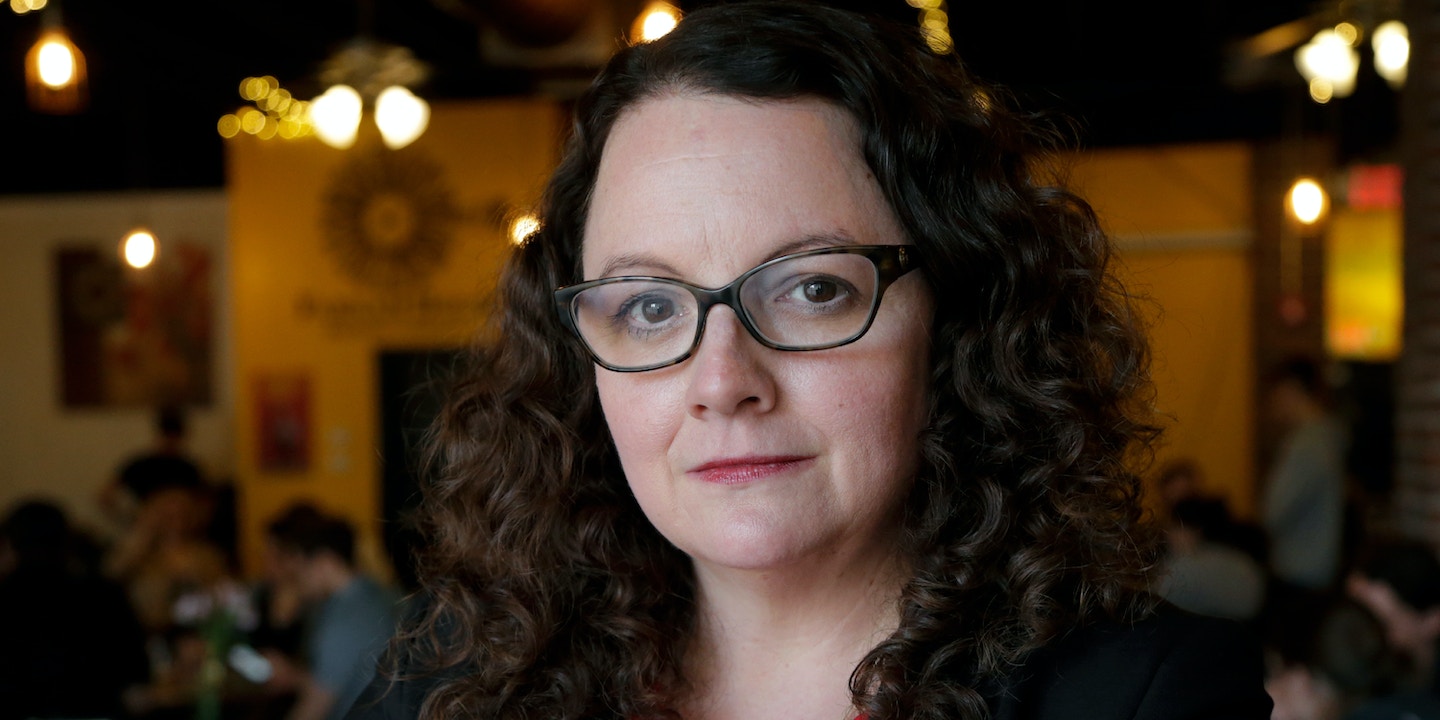 When Kara Eastman, a community activist, decided to run for Nebraska’s 2nd Congressional District, a swing seat surrounding metro Omaha, she was confident that pro-choice groups would leap to embrace her candidacy.

Eastman has campaigned on populist ideas like “Medicare for All,” tuition-free public university education, higher taxes on the wealthy, increasing the minimum wage and, notable for a Nebraska Democrat, unfettered access to reproductive health options. She even features her support for abortion rights in a campaign commercial.

It kicked off a heated conversation within the party, as some top Democrats argued that there was no place for anti-choice candidates in the party, while House Democratic leader Nancy Pelosi, D-Calif., and Rep. Ben Ray Luján, D-N.M., who chairs the House Democratic campaign arm, took the opposite position. (Writer and Texas Democratic congressional candidate Laura Moser weighed in to lambast Luján for the stance, a position she believes later came back to haunt her.) Sanders and DNC Chair Tom Perez countered that Mello was the only Democrat in the race, so he needed support in the general election. If Democrats wanted an outspoken pro-choice candidate, the place to have that fight was in the primary, not the general. Perez, after feeling heat, flipped, issuing a statement that insisted Democrats must only support pro-choice candidates. Mello, the man in the middle, put out his own statement, saying that he was not, in fact, opposed to abortion rights and would do nothing as mayor to restrict access.

On May 9, 2017, Mello lost his election by 6 points. On May 24, long before the dust had settled, Kara Eastman launched her pro-choice bid for Congress.

Eastman had even better reasons to suspect that abortion rights groups would rally to her side: Her opponent for the Democratic nomination, Brad Ashford, is a former Republican with a long history of supporting abortion restrictions. As a state legislator, Ashford voted for some of the same legislation that landed Mello on the business end of the choice groups. He backed bills to ban abortions after 20 weeks, require a doctor to perform an ultrasound on women seeking an abortion, require physicians to obtain a form notifying them of parental consent for minors seeking an abortion, and require that women seeking an abortion undergo a risk screening for any potential “demographic” or “emotional” factors that may complicate an abortion procedure.

But the major pro-choice advocacy groups have ignored her pleas for support.

An official from NARAL Pro-Choice America told The Intercept that the organization is not engaging in the primary race. Other pro-choice organizations, including UltraViolet Action, EMILY’s List, and the Planned Parenthood Action Fund, did not respond to repeated requests for comment about the Nebraska primary between Eastman and Ashford. Federal Election Commission records show no political action committees for national abortion rights groups donating to Eastman’s campaign or spending money on their own to boost her chances in the May 15 primary.

The only pro-choice group that has endorsed Eastman is #VoteProChoice, a small organization founded in 2016 by activist Heidi Sieck. In January, the DCCC added Ashford to its “Red to Blue” list of candidates, a gesture viewed by many as carrying the weight of official party support, which will also give him special access to party political resources. In addition, PACs controlled by Pelosi and Maryland Rep. Steny Hoyer, the two Democrats in charge of party leadership in the House of Representatives, have provided $21,000 to Ashford’s campaign, making the pair major contributors.

Eastman’s campaign expressed a mix of confusion and frustration at efforts by the party elite to shun her campaign, an opinion shared by a number of other progressive Democrats running for Congress. But the absolute silence from national pro-choice groups is especially painful.

“It’s disappointing that so many of the pro-choice organizations have decided to wait until after the primary to weigh in,” said Eastman. “I’m the only candidate who believes women are capable of making these decisions for themselves without unnecessary restrictions. If these organizations want to preserve a woman’s right to choose, they should be supporting candidates who are willing to consistently vote that way.”

A spokesperson for Ashford’s campaign did not respond to a request for comment.

Meanwhile, in Pennsylvania’s Lehigh Valley, EMILY’s List is pumping roughly $1 million into a race to stop an anti-choice Democratic prosecutor in a primary election set for May 15, the same day as Nebraska’s.

And despite the reluctance to back Eastman, national pro-choice groups have stepped in to challenge an entrenched Democratic incumbent in one high-profile race this year. Rep. Dan Lipinski, D-Ill., a conservative anti-abortion Democrat in a Chicago-area seat viewed as reliably Democratic, faced a spirited primary challenge from activist Marie Newman. Last November, a handful of progressive groups were joined by NARAL in endorsing Newman, a rare and direct challenge to a Democratic incumbent. Notably absent from the fray were EMILY’s List and Planned Parenthood. Fellow Illinois Democratic delegation member Reps. Jan Schakowsky and Luis Gutiérrez, along with high-profile Democrats from across the country, including New York Sen. Kirsten Gillibrand, broke ranks and endorsed Newman. Under intense pressure to get off the sidelines, the two groups finally endorsed Newman in February, the month before the primary. She ended up losing by just over 2,000 votes.

But in Nebraska, where Ashford appears to be the overwhelming favorite among national Democratic figures, there has been no similar intervention.

The 2017 uproar over Mello’s abortion record led to a wave of negative headlines for Sanders, who had pledged to participate in a “unity tour” with DNC leaders in support of left-leaning Democrats across the country. The criticism that Sanders had backed Mello in spite of Mello’s abortion record ricocheted across the country, with stories in the New York Times, NPR, CNN, The Atlantic, and beyond, quoting pro-choice leaders denouncing Sanders for supposedly eschewing reproductive rights in favor of his economic ideas.

“Heath Mello should trust women to make their own informed medical decisions – and Sen. Sanders shouldn’t support any politician who forces a pregnant woman to undergo an often-medically unnecessary, demeaning procedure over her objections,” said Karin Roland, chief campaigns officer of UltraViolet, in a statement. As the political storm grew, DailyKos revoked its endorsement of Mello.

Asked about the controversy by CBS News’s “Face the Nation,” Sanders held up his own legislative record of opposing all restrictions on abortions and argued that a broad range of community groups had urged him to support Mello. “If you have a rally in which you have the labor movement and the environmentalists and Native Americans and the African-American community and the Latino community coming together saying, ‘We want this guy to become our next mayor,’” Sanders said. “Should I reject going there to Omaha? I don’t think so.”

Mello, who identifies as Catholic and pro-life, said that if had been elected mayor, he “would never do anything to restrict access to reproductive health care.” His supporters further claimed that he had signed onto the ultrasound legislation as a way to negotiate a less draconian measure, ensuring that the final bill would give women the choice of whether or not to view the ultrasound image.

Mello’s opponent, incumbent Mayor Jean Stothert, an anti-abortion Republican, latched onto the controversy to mock the D.C. establishment interest in the race. Stothert went on to win the election by a comfortable margin.

Eastman has continued to run a serious race, raising over $355,000 from a broad donor base and winning the support of a range of local activists and political leaders. Though she has been spurned by national pro-choice groups, she has at least been endorsed by the Progressive Change Campaign Committee, as well as Justice Democrats and Political Revolution, two groups that spun off from volunteers and staffers of Sanders’s presidential campaign.

Top photo: Kara Eastman, one of two Democrats vying to challenge House Republican incumbent Don Bacon in a district centered in Omaha, Neb., poses for a photo on April 5, 2018, before a event in Omaha.