In a speech available on the IDF’s website, Israeli diplomat Abba Eban argued that blockades are acts of war that justify an armed response. 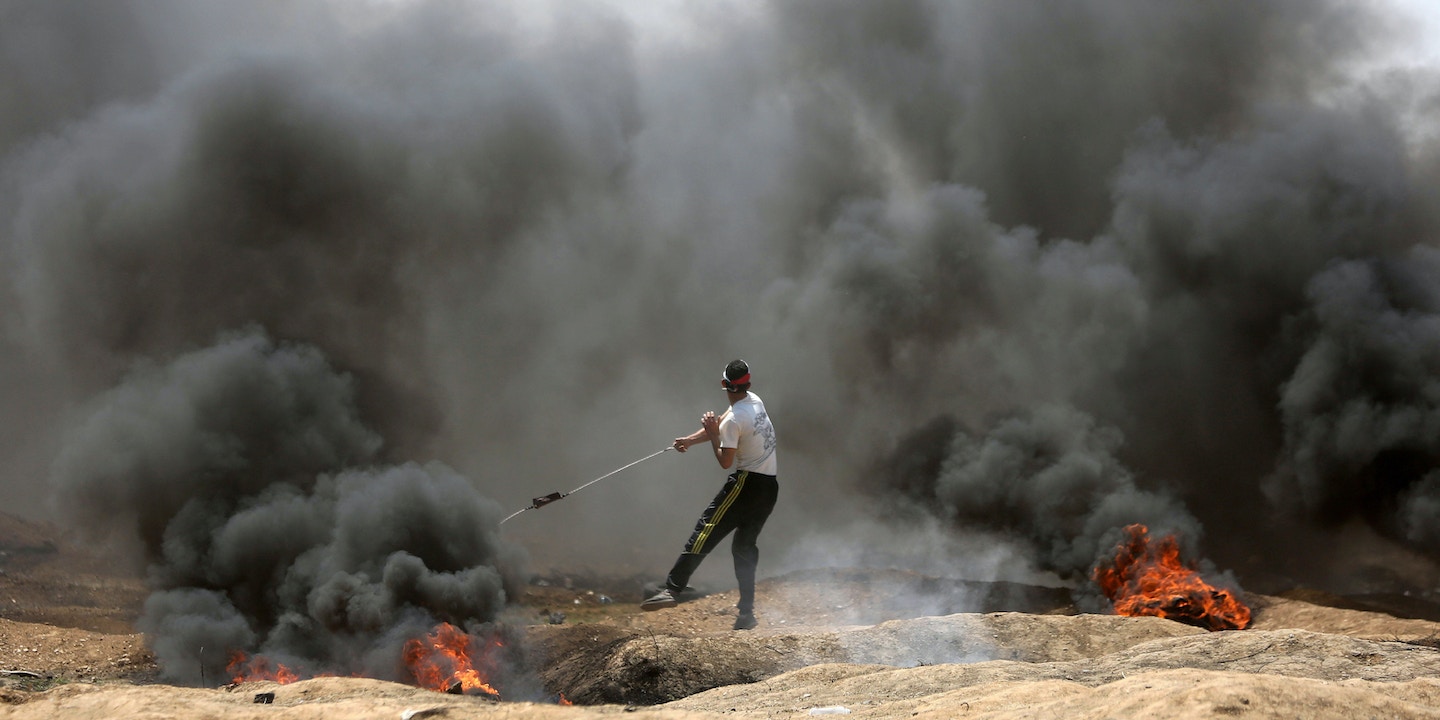 One of the key targets of the “Great March of Return” protests in Gaza, which began six weeks ago and culminated Tuesday, is Israel’s brutal, decade-long blockade of the small territory, which is about the size of Detroit. The siege has caused Gaza’s economy to shrink by one-half, and the United Nations has warned that it will soon render Gaza literally “uninhabitable.”

For its part, Israel knows who’s to blame for the 100-plus Palestinians dead and the thousands wounded during the demonstrations: Hamas. “They’re pushing civilians – women, children – into the line of fire,” Israeli Prime Minster Benjamin Netanyahu claimed this week, with no evidence whatsoever. The Israel Defense Forces, or IDF, tweeted that Hamas’s “tools for infiltrating Israel” include “children,” “disabled civilians,” and, most terrifyingly, “rope tied to fence.”

But there’s a stupendous historical irony to Israel’s manufactured outrage: Israel itself claimed that a far less stringent embargo by Egypt in 1967 was a legitimate casus belli for Israel to attack Egypt (which led to Israel seizing control of Gaza and eventually imposing the embargo on it).

Israel opened fire first during the Six-Day War on June 5, 1967, with an air and land attack on Egypt. But, Israel declared, Egypt had actually started the war several weeks before, when it blockaded the Straits of Tiran, which prevented Israel from shipping goods through the Red Sea.

But if it were legal for Israel to bomb and invade Egypt in 1967 and then occupy Palestinian land for decades, it logically follows that Palestinians in Gaza have had the right to attack and occupy Israel ever since the Israeli blockade began in 2007. Fair’s fair. This absolutely doesn’t mean that Palestinians should do that, even if they somehow could, which they can’t. But the silent hypocrisy surrounding the issue is bleakly funny — Israel can fire missiles, drop bombs, and seize land when subjected to a blockade, but Palestinians are monsters when they throw rocks and burn tires in response to a much more suffocating siege.

Israel’s 1967 legal stance can be found in a speech at the U.N. by the country’s then-Foreign Minister Abba Eban. Here’s the key paragraph:

The blockade is by definition an act of war, imposed and enforced through armed violence. Never in history have blockade and peace existed side by side. From May 24 onward, the questions who started the war or who fired the first shot became momentously irrelevant. There is no difference in civil law between murdering a man by slow strangulation or killing him by a shot in the head. From the moment at which the blockade was imposed, active hostilities had commenced and Israel owed Egypt nothing of her Charter rights. If a foreign power sought to close Odessa or Copenhagen or Marseilles or New York harbor by the use of force, what would happen? Would there be a discussion about who had fired the first shot? Would anyone ask whether aggression had begun?

It’s fairly rare online, but it appears on the website of Israel’s Ministry of Foreign Affairs, and relevant excerpts can be found on the website of the IDF, in a paper called “Self-Defense in International Law: The Case of the Six Day War.” Israel initially struck Egypt in 1967, after troop mobilizations and ferocious rhetoric on both sides, plus Egypt’s blockade of the Straits of Tiran. But in reality, the Straits of Tiran issue had had little impact on Israel. Only 5 percent of its trade passed through the straits, and Israel remained free to ship whatever it wanted, including goods that usually passed through the Red Sea, through its ports on the Mediterranean. Moreover, the embargo appears to have been enforced quite lackadaisically.

In 2006, the Bush administration pressed the Palestinian National Authority to hold elections, but was surprised when Hamas won a majority of seats on the Palestinian Legislative Council. Rather than accept the results of the election, the Bush administration tried to organize a coup by Fatah, America’s clients, to overthrow the Hamas-led government. This backfired spectacularly, leading Hamas to seize control of Gaza, with Fatah holding power in the West Bank.

During this period, Israel mercilessly tightened its control of Gaza’s borders, at times going so far as to prohibit the import of such goods as nutmeg, fishing rods, and A4 paper. More significantly, restrictions on building materials and fuel made it extremely difficult for Gazans to rebuild after several brutal bombing campaigns by Israel.

Of course, politics and war have always involved the most glaring double standards imaginable. As the powerful Athenians famously explained to the powerless Melians in Thucydides’s “History of the Peloponnesian War,” “right, as the world goes, is only in question between equals in power, while the strong do what they can and the weak suffer what they must.”