At 38 years old, I smoked weed for the first time on a doctor’s say-so. Now I’m more convinced than ever that our cannabis laws are ridiculous.

Have you ever seen the Batman movie, “Dark Knight Rises”? In it, Bruce Wayne, after a life of putting his body on the line fighting bad guys, needs to see the doctor. He’s in too much pain to just suit up and get back out on the streets. When he gets there, he quickly learns from the doctor that he has more things wrong with his body than he does right.

When I was 15 years old, I was brutally beaten by a racist mob. The attack required three spinal surgeries, and I missed 18 months of school while convalescing. Despite undergoing more surgeries since then, my lower back never recovered, and the pain radiates down both of my legs daily. I’ve done physical therapy, pain injections, and everything else you can think of.

The punches and kicks to my face badly damaged my sinuses. The bruising has long since faded, but they still give me trouble every other month or so.

Six years later, I was in a horrible car accident and was thrown through the front window, face first, at full speed. We had slipped on black ice, and the car hit a guard rail before my whole body ejected, thus hurling me back into the seat.

It took 400 stitches to put my face back together again. My teeth were badly damaged. My eyelid was sewn back on, as was a big part of my bottom lip. When the wounds healed, I was left with several ruptured discs in my neck, sinuses that were in even worse shape, and chronic migraine headaches.

The next year, I tore a rotator cuff in my shoulder trying to change a tire in the rain. Then, in 2016, I tore it again while moving furniture. Then, six months later, I was about to fall off a stage in New Orleans when I caught myself and, as a result, fractured my other shoulder. My neck pain got exponentially worse. Shaun King after his car accident.

My body is a mess. I’m in constant, debilitating pain. It’s a struggle to get out of bed. I have a hard time putting my shoes on. It hurts to get a shirt off and on. But here I am: married with five young kids and a demanding career.

I take over-the-counter pain meds. From time to time, I take prescription pain medications. I get massages. I do ice packs and heating pads. I’ve been in and out of physical therapy for 20 years. Finally, my neck and head pain got so severe last year that I had to go to a pain management clinic.

When the doctors saw the MRI results for my neck, they couldn’t believe how long I had gone without a medical intervention. That day, they did a series of pain injections. The injections themselves were among the most painful things I’ve ever felt – and I’ve felt a lot of pain. The tissue, nerves, and discs were so messed up that I could literally hear the crunching sound as he injected the needle deep into my neck to deposit the medicine.

For the next week or so, I felt like a new man. I had been in pain for so long that I genuinely forgot that I could ever feel that free. Sadly, I was only allowed to get the injections a few times per year — and my insurance didn’t even cover the treatment.

So my doctor prescribed medical cannabis.

Even with all the pain I was in, I was still very hesitant. For the first 37 years of my life, I was proud to say that I had never smoked a single day – not weed, not cigarettes, nothing. I never had a drink of alcohol or even a cup of coffee, for that matter. I had become almost monkish about those things and, after a lifetime of avoiding smoking, I was hesitant. But my doctor insisted it was something I needed to try if avoiding surgery was a priority for me.

By the time the doctor sold me on the idea, I was ready to go get some that day. I needed the relief. But that’s not how it goes.

The laws on whether cannabis is legal for either medical or recreational purposes vary from state to state; currently 29 states and Washington, D.C., have some kind of legal weed, and recreational use is permitted in nine of those places. In New York, there’s medical cannabis, but it’s not legal for recreational use, so you must have both a license and a prescription for it. By the time the doctor sold me on the idea, I was ready to go get some that day. I needed the relief. But that’s not how it goes.

First, I needed a valid New York driver’s license and I didn’t have one. Mine was from Georgia. It took me a few weeks to work that out, including paying a bill for a fine in Georgia I didn’t even know I had. Then I had to apply for the medical cannabis license – which took several more weeks. By the time I got it in the mail, it was two months after the doctor had made his prescription — and the whole process had cost me several hundred dollars.

Finally, I went to a medical cannabis clinic, where I saw a doctor who issued what she thought I needed. I didn’t know it, but the clinics don’t even sell the weed flowers, better known as “buds.” Instead, they sell cannabis oil that you can smoke in a vape pen or digestible pills that have the same effect. I got enough to last me about a month. It cost $500. I was shocked. Again, insurance doesn’t cover it. I really couldn’t even afford it, but was so desperate to relieve the pain that I spent the money anyway.

And it helped me a little. Some days it helped more than others. It actually took me using it for a few weeks before I really felt like it relieved the pain. But it ran out several months ago, and I just haven’t made the time to go back. It was so expensive and so complicated that I’ve just put it off, but I need it.

I’m in pain right now as I type this, but the process just doesn’t work for me. The catch is that this process doesn’t work for most New Yorkers who need cannabis. We’re busy. We’re on a real budget. And this huge city literally only has a few locations where you can go to get medical cannabis. It just shouldn’t be this hard or this expensive. The thing is, I wouldn’t have even known this problem existed on this level if I wasn’t in personal need of the pain relief that cannabis provides. 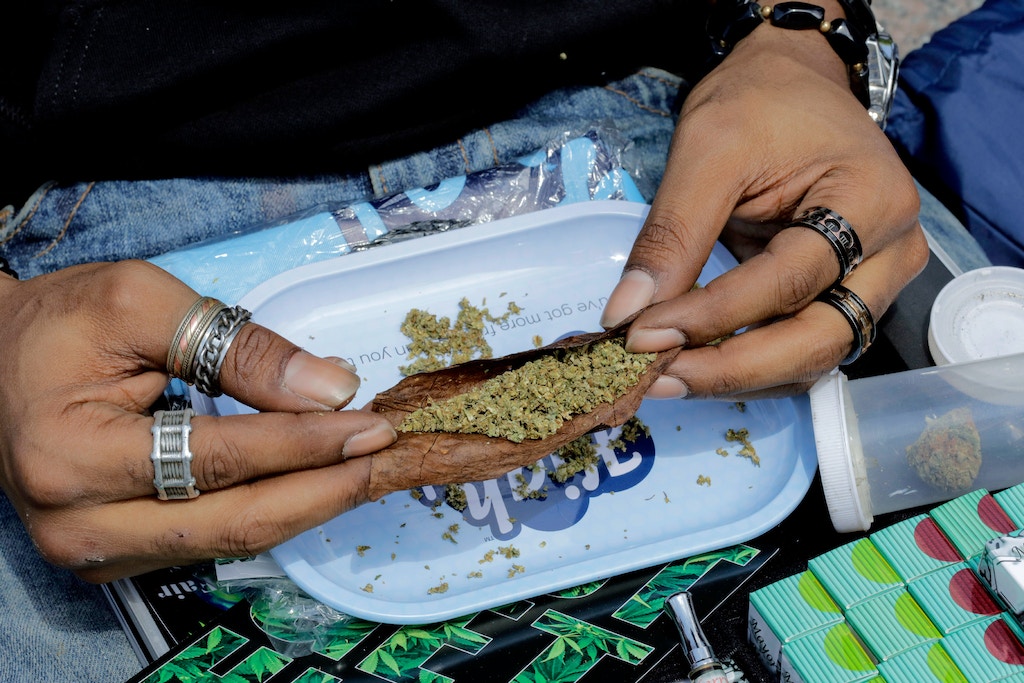 Hundreds of people participated in the annual Cannabis Parade & Rally in New York City on May 6, 2017, in support of the legalization of the herb for recreational and medical use.

The alternative to running through this outrageously complicated, inconvenient, and expensive gauntlet is to try to get cannabis on the black market. But that entails some obvious risks. I would have to break the law and risk arrest for me and someone else. Luckily, I don’t have to: I can take that medical route — I have the $500, the license, and prescription. But tens of thousands of New Yorkers who may also need what I need can’t, and that’s wrong.

The fact of the matter is that cannabis is basically already decriminalized for white people who buy it recreationally and anyone else who can afford the medical route. It’s just plain wrong that anyone is being arrested and having their lives ruined because they want or need it and just don’t have the same level of access to it.

For years, I’ve studied and reported on how communities of color are targeted by police, arrested, and convicted for weed possession at a rate that is altogether disproportionate to white people – even though the usage rate is nearly identical. But now, as someone who actually wanted the product for myself, I saw up close and personal how messed up the system is: There are people of color going to prison for having the same stuff I can get because of my access to a doctor and funds to pay the high cost on the medical market.

There are people of color going to prison for having the same stuff I can get because of my access to a doctor and funds to pay the high cost on the medical market.

What makes it all worse is that, after smoking weed as an adult, it’s obvious that this is not a dangerous drug — it’s nothing like those old “Reefer Madness” movies. People should be able to enjoy this mild drug without having to risk arrest.

And the risk of arrest is very real. For decades now, New York City has avoided real reforms on the war on drugs like the plague. The city has a sky-high pot arrest rate, despite having a liberal mayor and a city council completely dominated by Democrats.

A few of our local district attorneys have announced that they are going to stop prosecuting some cannabis crimes, and Mayor Bill de Blasio said he is ordering some changes in police policy. But the fact remains that weed is still not decriminalized here – and it damn sure isn’t legalized. District attorneys in the Bronx, Queens, and Staten Island said they are going to continue with the thousands and thousands of arrests and convictions they process every single year for weed possession. It’s preposterous.

The solutions to the injustices of the black market and the high barriers for entry into the medical market are obvious: New York City needs to immediately decriminalize cannabis. And the state should vacate all arrests, remove all previous convictions, expunge records, then fully legalize it – with a guarantee that the men and women who’ve paid the highest price for selling it over the past 50 years are ensured a significant piece of the business.

New York’s progressive reputation — a bragging point for the city — far outpaces the reality, particularly on criminal justice reform and issues of equality for communities of color.

I cared about this issue before I ever took cannabis. Now that I do, the inequities and disparities are even clearer. New York has a long way to go before it even gets close to righting so many of the wrongs here.