The Unbearable Whiteness of NFL Ownership

President Donald Trump demanded that the NFL suppress the national anthem protests, and the league obliged. Why? Look at the owners. 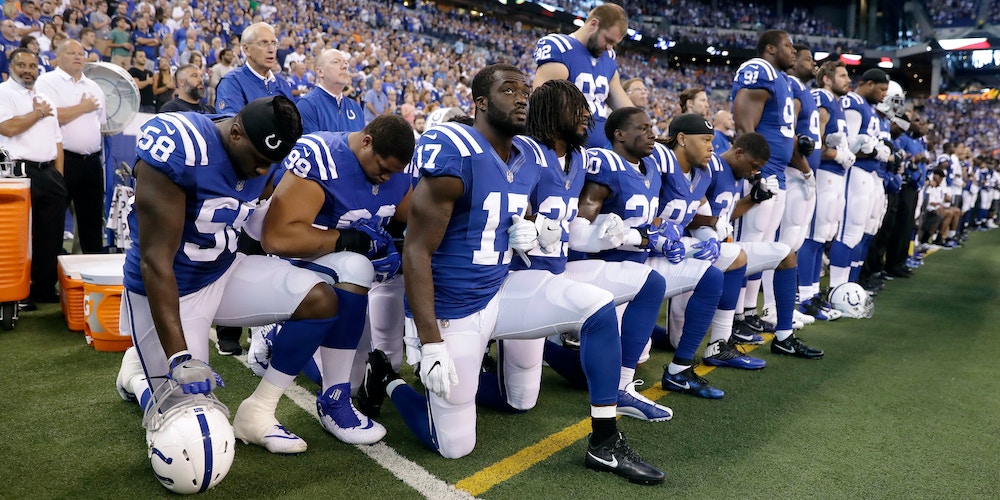 Members of the Indianapolis Colts take a knee during the Nation Anthem before an NFL football game against the Cleveland Browns on Sept. 24, 2017.

On Wednesday, 31 out of 32 NFL team owners voted to appease President Donald Trump by banning any form of on-field protest or demonstration during the pregame singing of the national anthem. One team owner abstained: Jed York of the San Francisco 49ers, the former home of Colin Kaepernick and Eric Reid, two players who’ve effectively accused the league of banning them in part because of their involvement in on-field protests.

At the root of all this is race and culture.

At least 70 percent of NFL players are black, according to the latest information available from The Institute for Diversity and Ethics in Sport, or TIDES, at University of Central Florida. Yet ownership of the league is much less diverse, according to TIDES: Only two teams, the Jacksonville Jaguars and Buffalo Bills, have people of color in majority ownership — a Pakistani-born American and an Asian-American, respectively. What’s more, the entire league doesn’t have a single African-American team owner — not one. And it is the team owners who are making the executive decisions in this case. The NFL players union announced that they weren’t even consulted before the team owners voted and made their announcement about the ban of any on-field demonstrations during the national anthem.

Trump railed against NFL players who demonstrated during the national anthem and ultimately found team owners that were sympathetic to his demands.

Race — and the corresponding life experiences, cultural understanding, and perspective that comes with it — might inform American politics now more than it ever has. No demographic was more likely to vote for Trump than white men. In an anonymous straw poll of NFL players undertaken by Bleacher Report, 21 out of 21 white players professed their support for Trump, while 20 out of 22 black players supported Hillary Clinton. Many of the team owners are huge Trump donors and supporters. Trump appointed Woody Johnson, the owner of the New York Jets, to be the U.S. ambassador to the United Kingdom.

So while Trump railed against NFL players who demonstrated during the national anthem, using the ugly phrase “son of a bitch” and said Wednesday they should consider leaving the country, he ultimately found team owners that were sympathetic to his demands. Again, whiteness is at the root here. Mike Freeman of Bleacher Report found intense hatred of Kaepernick among team executives. One executive literally called Kaepernick a “traitor” and another said he was the most hated player in the league since Rae Carruth — a convicted murderer.

In black communities across this country, though, Kaepernick is a cult hero. Murals are painted of him. His afro will be ubiquitous in black art, on T-shirts and posters at every black festival across the country this summer.

And that’s the rub.

If the percentage of black NFL team owners resembled the percentage of black NFL players, Kaepernick and Reid would each be on rosters right now. When the Carolina Panthers were put up for sale, hip-hop mogul Diddy said he wanted to buy the team and make Kaepernick its quarterback. The team was sold to another white man instead. (According to a recent CNN report, neither Diddy nor the Panthers commented on whether the music mogul made an official bid.)

This is the story of all of professional sports. Of the 92 major professional sports teams in the U.S. — between the NFL, NBA, and MLB — there are only six teams with people of color as majority owners, and just one of them is an African-American.

That means around 1 percent of owners of major professional sports teams are black. It’s outrageous — particularly considering that in many of the leagues, including the NBA, WNBA, and NFL, around 70 percent or more of the players are black, according to TIDES’s studies.

Of the 92 major professional sports teams in the United States, just one has an African-American principal owner. One.

This arrangement — of black athletes playing sports and dominating their playing fields, all while creating tremendous wealth for white owners — was a direct consequence of one of the most glaring failures of American integration in the 1940s and 1950s. African-Americans once fully owned thriving sports leagues with franchises spread all over the country, from the Black Fives of basketball to baseball’s Negro leagues. But what integration ultimately meant in the U.S. was the demolition of black ownership, in sports and elsewhere, to integrate into white-owned spaces.

Now, more than ever, I hear black celebrities, moguls, investors, and even everyday people saying things like, “We need to start our own leagues.”

The current arrangement is humiliating. Trump insults and degrades professional athletes, then virtually dictates the new policies the NFL needs to adopt, then brags about it. And African-American players who’ve spent their entire lives preparing to play in the league are simply expected to shut up and take it.

Many leading black voices renewed their calls for a boycott of the league this week. And even this is another form of humiliation for black players — knowing that their primary audience will likely get whiter and whiter — while conscientious African-Americans feel that they must turn the game off to salvage a modicum of self-respect.

The fact of the matter is that these leagues were created by white people for the entertainment and wealth of white people. When African-Americans tinker with that formula — by demonstrating in a way that insults white sensibilities — they are shut down. Perhaps the only way to fix the problem is indeed to start new leagues with new owners and managers.