The U.N. estimates 340,000 people will likely be displaced if fighting reaches the port city of Hodeidah, a key entry point for humanitarian aid. On the edge of the village of Al Buqa in the Yemeni governorate of Hodeidah last month, Yemeni fighters dressed in a mix of military fatigues and mawaz – the wraparound skirt traditionally worn by men here – stood in a loose formation along the main highway near the bright blue waters of the Red Sea.

The fighters, known as the Yemeni National Resistance, included members of the sandal-clad Tihama Resistance, gaunt and war-weary after years of fighting, as well as the more recently deployed Guards of the Republic led by the nephew of Ali Abdullah Saleh, Yemen’s former president of 33 years. Along with southern Yemenis, ultraconservative Sunni Muslim Salafis, and Sudanese troops, they are America’s de facto allies in a fight against the Houthis, an Iran-allied rebel group that, since 2015, has been fighting a U.S.-backed coalition of 10 nations led by Saudi Arabia and the United Arab Emirates.

The Yemeni coalition-allied fighters have advanced rapidly since the UAE stepped up support for them after Saleh was killed in December. A longtime U.S. and Gulf ally, Saleh had aided the Houthi takeover of Yemen’s capital in 2014. But at the end of 2017, he switched sides again, declaring loyalty to the coalition and sparking a battle with the Houthis that ended in his death at their hands. 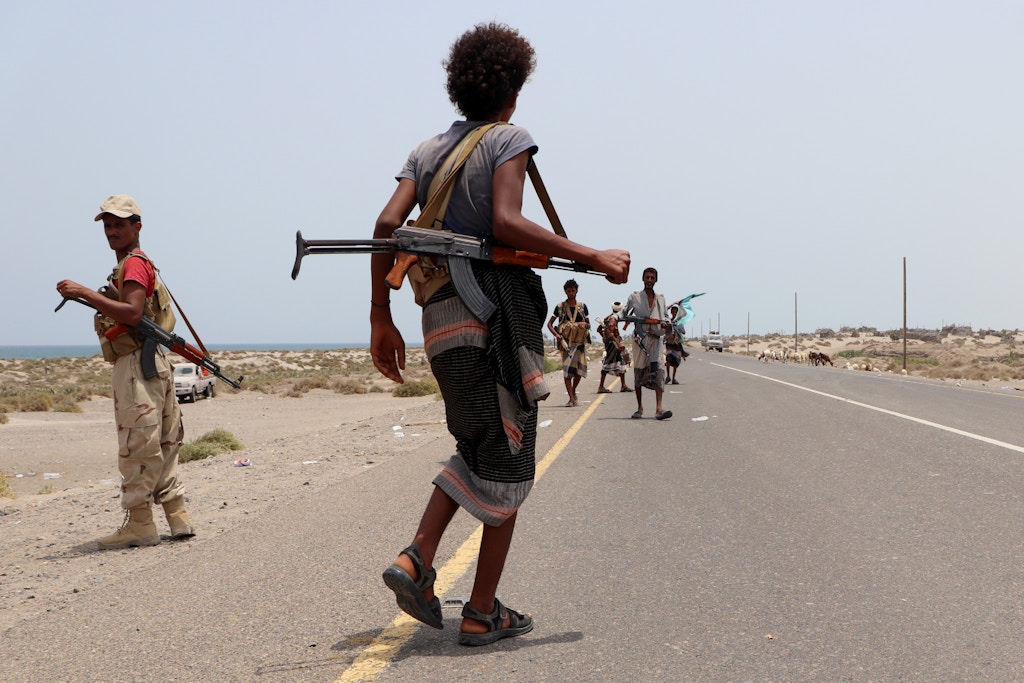 Fighters from the Tihama Resistance move north into the Houthi-controlled village of Al Buqa, Hodeidah, on May 15, 2018.

Photo: Iona Craig for The Intercept

A few remaining Saleh loyalists, including his nephew Tareq, escaped Houthi territory. Whether seeking revenge or out of political expediency, Tareq joined the coalition’s fight against the Houthis, bringing fresh troops, including a small contingent of soldiers from Saleh’s old Republican Guard, a military unit that the U.S. has previously supported. The UAE has been training new recruits and also provided a significant supply of armored personnel carriers and shiny new tanks to break the stalemate on Yemen’s western front line.

“We take our orders from the Emiratis, of course,” a field commander told The Intercept before leaning in through the open door of his pickup truck to grab a radio so he could call for air support as his men trundled toward Al Buqa flanked by the new Emirati military vehicles.

In the last two weeks, the Yemeni proxy fighters have gained another 50 miles, only slowed by thousands of land mines laid by retreating Houthis who otherwise put up little resistance. By this week, they were in Ad Durayhimi, within 10 miles of their ultimate goal: the port city of Hodeidah, which has been under Houthi control since 2014.

The Yemeni National Resistance fighters aiming to take Hodeidah cannot possibly do it alone. Time spent with the fighters on the front lines makes it clear that they depend on air power from the Saudi-formed coalition, as well as UAE ground support. A former senior White House official told The Intercept that multiple U.S. officials have indicated that the UAE said it would not attack Hodeidah without U.S. backing.

So far, the U.S. has been unwilling to back such an invasion, but recent reporting suggests that may be changing. “We have folks who are frustrated and ready to say: Let’s do this. We’ve been flirting with this for a long time. Something needs to change the dynamic, and if we help the Emiratis do it better, this could be good,” an unnamed senior U.S. official told the Wall Street Journal.

That cavalier tone belies the potentially disastrous consequences of such an attack. The port of Hodeidah has been crucial to getting humanitarian supplies and commercial food imports into the country despite severe restrictions imposed by Saudi Arabia that have included a ban on containerized cargo entering Hodeidah’s ports. The United Nations’ humanitarian office estimates that 340,000 people are likely to be displaced if fighting reaches Hodeidah city, adding to the 3 million already internally displaced since the Saudi coalition intervention in Yemen began in March 2015.

“Any disruption to this critical lifeline could be a death sentence for millions of Yemenis,” said Abdi Mohamud, Yemen country director for Mercy Corps. “The humanitarian needs are already overwhelming. The disruption of Hodeidah port could effectively kill any hope of averting a greater humanitarian catastrophe.” Photo: Iona Craig for The Intercept

Success for Saudi-UAE-supported forces in any attempt to take Hodeidah is far from certain. According to a U.S. military analysis reviewed by The Intercept, the Yemeni forces’ “lack of will” coupled with the Muslim holy month of Ramadan, which runs from mid-May to mid-June and involves fasting from sunrise to sunset, may slow the assault. Forces on the front lines on the eve of Ramadan told The Intercept that they were reluctant to fight through the Muslim holy month.

The military document viewed by The Intercept also highlights recent setbacks for the UAE-backed Yemeni fighters when they attempted to push east toward the city of the Taiz, which remains partially controlled by the Houthis. “The [UAE Presidential Guard] indicated operations east of Mukha did not go as planned and suffered numerous casualties,” the document notes. It also mentions a 2017 attack against the Houthis in the same area of the Red Sea coast by the UAE’s elite forces. The Emiratis came under fire and suffered “weapon employment issues and malfunctions”; they later described the battle as “hellish,” according to the document.

Although the UAE pledged not to make the final push on Hodeidah without U.S. approval, Emirati officials have claimed that they have no control over the actions of its surrogate forces, raising concern that Yemeni anti-Houthi resistance fighters may advance on the city without authorization.

But that contradicts the scene on the front line last month, which suggested that the Yemeni fighters do not move without Emirati orders. Soldiers told The Intercept that their salaries are also paid by the UAE, with additional daily cash handouts for some resistance fighters arriving in plastic bags on the front line. More than a half-dozen field and brigade commanders acknowledged taking their orders from the UAE, including from Emirati senior officers stationed on the Red Sea coast. The strength of the Emirati chain of command is important because the notion that the U.S. and UAE don’t really control the fighters gives those countries “plausible deniability” in case of an attack, Hiltermann said.

Any final military push on Hodeidah now appears to rest on the success of the U.N.’s Special Envoy for Yemen, Martin Griffiths, who arrived in the Houthi-controlled capital of Sana’a on June 2 for a four-day visit. Griffiths is making a crucial attempt to reach a diplomatic solution to avert the looming battle by reaching an agreement with the Houthis for their withdrawal and acceptance of a proposal to place the port under U.N. or international supervision.

With forces on the outskirts of the city, pressure is mounting. On Thursday night in Hodeidah, residents witnessed a heavy presence of Houthi trucks in several parts of the city and artillery fire from nearby fighting could be heard from downtown. A deal between the two sides would open the way for further political negotiations, while failure could result in a long and devastating struggle for control of Hodeidah. But for these political efforts to succeed, both sides must be convinced that this is an unwinnable war militarily, Hiltermann noted. Hours after Griffiths left Yemen, the Houthis fired a ballistic missile into neighboring Saudi Arabia. A separate U.N. peace plan, yet to be unveiled, reportedly includes a call for the Houthis to give up their ballistic missiles in exchange for an end to the Saudi-UAE led coalition airstrikes, as well as a proposal for a transitional government following a ceasefire. Griffiths is due to present a Yemen proposal by mid-June.

Saudi Arabia established the coalition in March 2015 and launched an aerial bombing campaign in Yemen to push back the Houthis, who seized control of the capital in September 2014. Since 2015, the UAE has been responsible for much of the ground war, particularly in the south and west of the country. 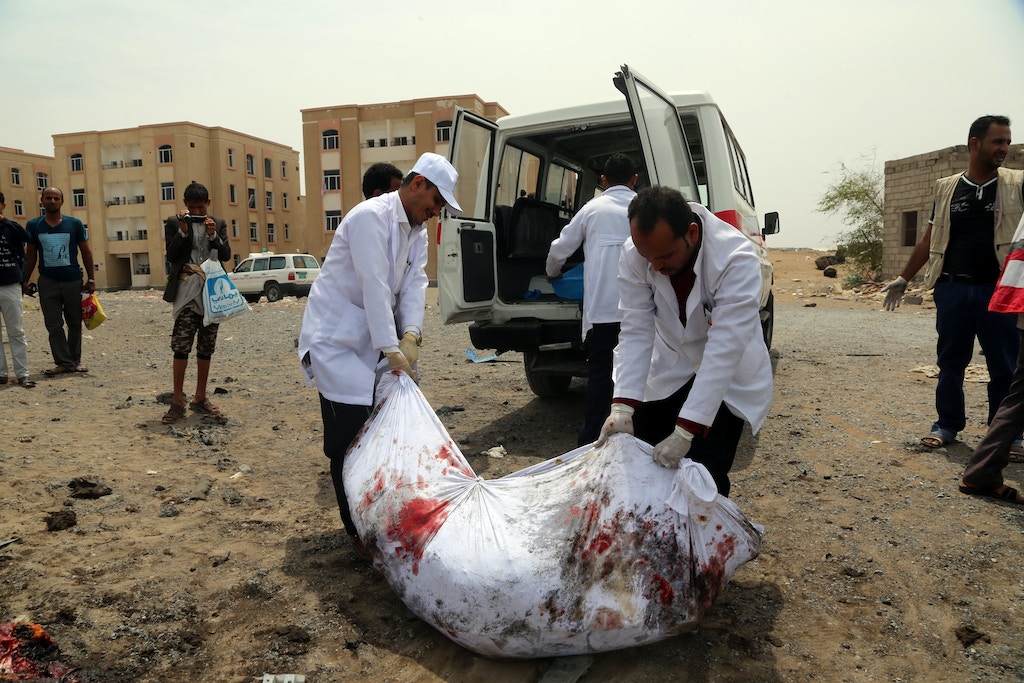 Yemeni men carry the body of victim who was killed in air strike in the district of Al-Hali in Hodeida province, on April 2, 2018.

More than 22 million Yemenis, three-quarters of the population, are already in need of humanitarian assistance, compounded by restrictions on imports imposed by the Saudi-UAE-led coalition and a complete blockade on humanitarian aid last November in response to the Houthis firing ballistic missiles into Saudi Arabia. Saudi officials claim Iranian missiles are being smuggled into Yemen via Hodeidah despite a U.N. monitoring system for vessels entering the port.

Military commanders on the front lines in Hodeidah governorate told The Intercept that their troops planned to cut off supply lines and besiege Houthi forces in the city, rather than fight their way in, though the UAE has also said this could change “if there is an attack on them or some sort of provocation from inside the city.” Any claim of incitement would likely be impossible to verify in the ensuing battle.

The conflict in Yemen has killed an estimated 28,033 people since January 2017 and pushed 8.4 million to the brink of famine. Some 50,000 Yemeni children are estimated to have died last year from hunger and preventable disease as a result of what U.N. aid agencies describe as “the world’s worst humanitarian crisis.”

“Hodeidah isn’t a political pawn to be traded and bargained with. It is a lifeline that millions of ordinary Yemenis are depending on for survival,” warned Mercy Corps’ Mohamud. “Grandstanding and hyperbole will not feed the people if the aid deliveries dry up.”

Top photo: Yemeni Resistance Fighters in Al Hayma the day after pushing Houthi rebels out of the seaport.