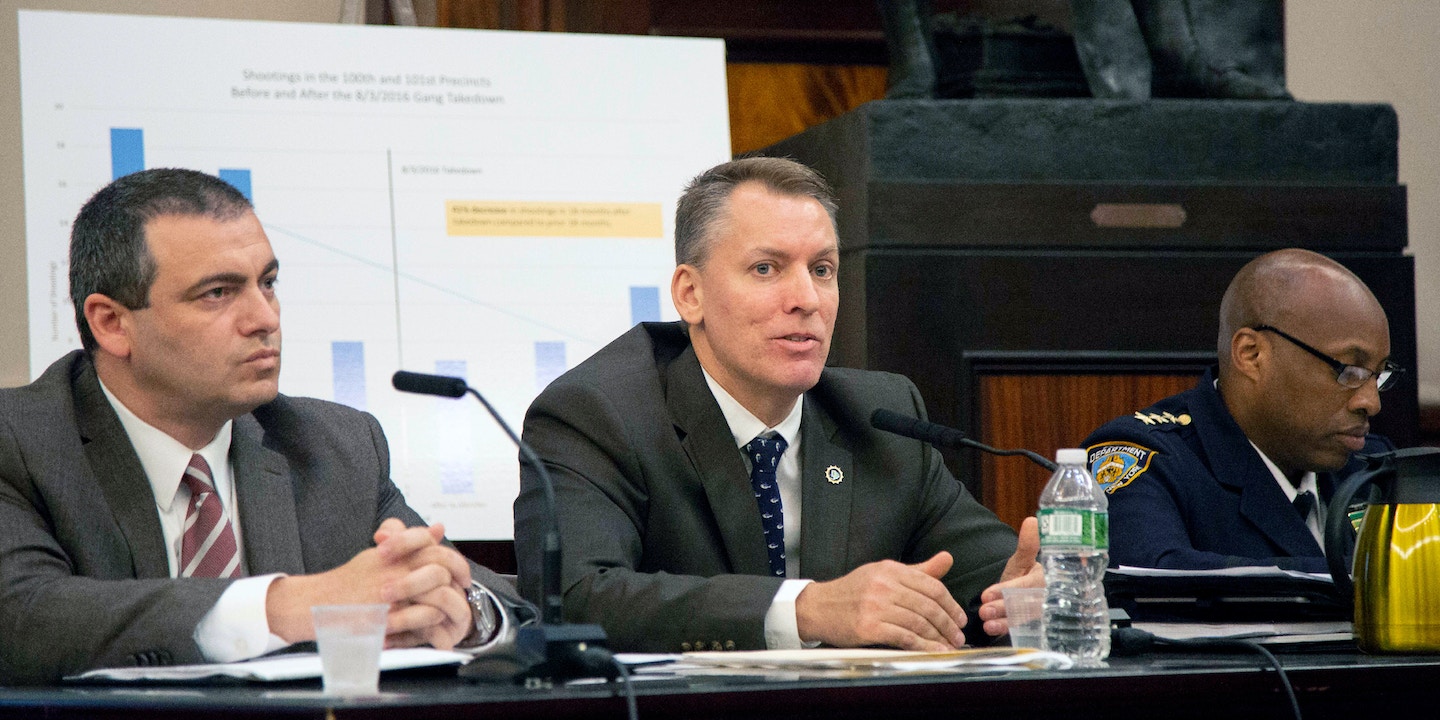 Senior New York Police Department officials testifying on Wednesday before City Council hotly contested the claim, published first in The Intercept, that the gang database maintained by the department swelled by 70 percent between December 2013 and February 2018 to include more than 42,000 New Yorkers.

“I’ve learned not to believe what I read in the papers. I have no comment on The Intercept,” said Chief of Detectives Dermot Shea. “I did not read the entire [article], but what I did read, I read some glaring errors.”

The Intercept sent the NYPD detailed questions about the gang database before publication. But neither the department nor the mayor’s office responded. Instead, in an op-ed in the New York Daily News on Tuesday, Shea defended the department’s program, arguing that what the headline described as keeping up a “roster of goons” helped keep the city safe.

At the New York City Council hearing, Shea didn’t specify what errors he found in The Intercept’s story, but the gist of his critique was clear: In Shea’s telling, far from ballooning the secret list of suspected gang members, New York police have actually made great strides in reducing the size of what he called the “Criminal Group Database.”

“Around 2014, senior leadership in the NYPD performed a top-to-bottom review of the entire department,” Shea said, “including a review of the department’s Criminal Group Database. At that time, over 34,000 people were entered, without protocols for removal.” As a result of that overhaul, Shea said, the department replaced the old database with a new one and created mechanisms by which people could be removed from the list. “Today,” he said, “our Criminal Group Database has approximately 17,500 individuals, almost half of where it stood in 2014.”

“If there are discrepancies or inaccuracies in those numbers, those are the ones NYPD sent directly to me.”

Shea’s math was difficult to follow and at several points in his testimony appeared to contradict itself. Later in the hearing, touting newly instituted review mechanisms to prune the list of people no longer involved in gangs, he told City Council members that 3,737 people had been removed from the list in the previous four years — well short of the 16,500-person drop he’d suggested earlier.

The Intercept’s reporting was based on the NYPD’s own numbers, as reported to Babe Howell, a gang-policing expert at the City University of New York Law School. In her own testimony to City Council yesterday, Howell noted that her figures were based on the NYPD’s own responses, largely in the form of Freedom of Information disclosures, one of which the department did not fulfill until she sued them. “If there are discrepancies or inaccuracies in those numbers, those are the ones NYPD sent directly to me,” Howell said.

Shea suggested that concern that the database was serving to criminalize young children was misplaced. He testified about the ages of those in the database: Seventeen people entered into the database are 13 years old; 80 people are age 14; 204 are 15; 455 are 16; and 704 are 17. “I won’t add those up,” Shea told council members, “but what I will tell you is individuals in that database that comprise the roughly 17,500, when you look at the totality of under 18 years of age, it’s 2 percent.” The overwhelming majority of people listed in the database are considerably older, Shea said, with the average age being 27.

The Intercept added up Shea’s figures, arriving at a total of more than 8 percent of the NYPD’s purported database numbers composed of individuals under the age of 18.

The NYPD did not respond to an email seeking clarification on Shea’s testimony or his dispute of Howell’s statistics.

The NYPD tracks organized crime wherever it finds it, including Russian, Albanian, and Italian mafias, as well as criminal motorcycle gangs, Shea said. But asked to break down the gang database membership by ethnicity, he testified that it was 65 percent black, 24 percent “white Hispanic,” and 10 percent “black Hispanic.”

This racial disparity is unfortunate, Shea said, but it tracks closely with the realities of violence in New York, where NYPD statistics show that 95 percent of gun violence involves a person of color either as the victim or as a person arrested in the shooting.

Shea stressed that the database was a critical informational tool for police and said inclusion in the NYPD’s gang database doesn’t carry the same negative consequences that might come in other jurisdictions — New York doesn’t have California’s statutory sentencing enhancements for gang members, and “no one outside the NYPD, to my knowledge, has access to the database.”

Pressed by Council Member Rory Lancman, Shea conceded that the NYPD does share gang-status information with prosecutors. “Will we at times discuss that this person is, in fact, a gang member?” he said. “Yes, we will.”

Lancman went on to ask if the NYPD has any guidelines that govern when the department shares a defendant’s inclusion in the gang list. Shea responded, “The answer is no. Every case is unique.”

The hearing had initially been scheduled for a small committee room, but was only moved to the larger chambers after activists complained that the NYPD had packed the room with interns, leaving only a dozen or so seats for press and community members. The police brass left after their own testimony — and with it much of the press — but the City Council committee hearing continued, with lawyers, advocates, academics, and community members sharing their own, overwhelmingly critical, appraisals of the gang database. By the time the last of the advocates testified, only Committee on Public Safety Chair Donovan Richards was left at the dais.

Marne Lenox, a lawyer with the NAACP Legal Defense and Educational Fund, told council members that there was a straight line from the racist and unconstitutional pattern of stop and frisk that targeted black and brown New Yorkers over the previous two decades to the “precision policing” of the gang database today.

“The NYPD gang policies and practices appear to be a targeted extension of the unconstitutional racialized policing tactics challenged in” the federal lawsuits that took on the NYPD’s stop-and-frisk policies, Lenox said. “Today, the NYPD notes that police stops are at an all-time low. But while the NYPD cites declining numbers of stops as evidence of its compliance with the law, the department continues to secretly target, surveil, and catalog young men of color. Those same individuals once subjected to the degradation of multiple stops and frisks are now instead stigmatized as dangerous gang members.” 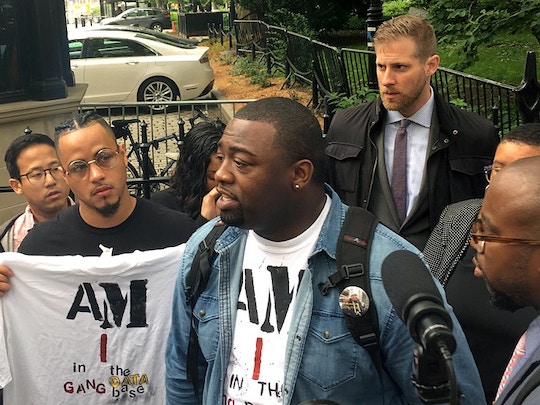 Victor Dempsey told a crowd outside New York City Hall that his gang designation was full of errors, and that it still haunts him in his interactions with police.

Photo: Nick Pinto for The Intercept

Victor Dempsey, a 32-year-old community organizer, told council members that as a young man, he was affiliated with the Bloods. After serving a prison sentence in 2003 for armed robbery, he decided to go straight. Fifteen years later, he was pulled over by police in the Brooklyn neighborhood of East New York last fall and found himself handcuffed in the back of a cruiser. The officer running his license found him still listed in the gang database — as a Crip.

Taylonn Murphy Sr., whose daughter was killed in neighborhood violence and whose son was sentenced to 50 years in prison after a 2014 “gang takedown” raid that netted 103 people in neighboring public housing projects in Harlem, testified that the NYPD’s aggressive, carceral approach hurts poor communities at least as much as the violence it is supposed to reduce. “How do you put out a fire with fire?” Murphy asked.

Throughout the hearing, a squad of officers from the NYPD’s Strategic Response Group, a special operations unit created in 2015 to respond to terrorist attacks, civil disorder, and large crowds, stood in the back of the council chamber and outside the chamber door.