Sanctuary was an alternative to an impossible choice: dash her American son’s dreams of working for NASA, or allow herself to be deported without him. “Welcome to my place,” Debora Barrios-Vasquez said on Thursday, greeting assembled reporters as she approached a podium bristling with microphones inside St. Paul and St. Andrew Methodist Church on New York City’s Upper West Side.

The church hasn’t been Barrios-Vasquez’s home for very long. Until recently, the 32-year-old was living in Mamaroneck, north of the city in Westchester County, New York, with her two children. She worked two jobs and volunteered at her church and local community center. But, since June 4, Barrios-Vasquez and her 2-year-old daughter, Berenice, have been living inside St. Paul and St. Andrew, taking sanctuary from an Immigration and Customs Enforcement order for her deportation. 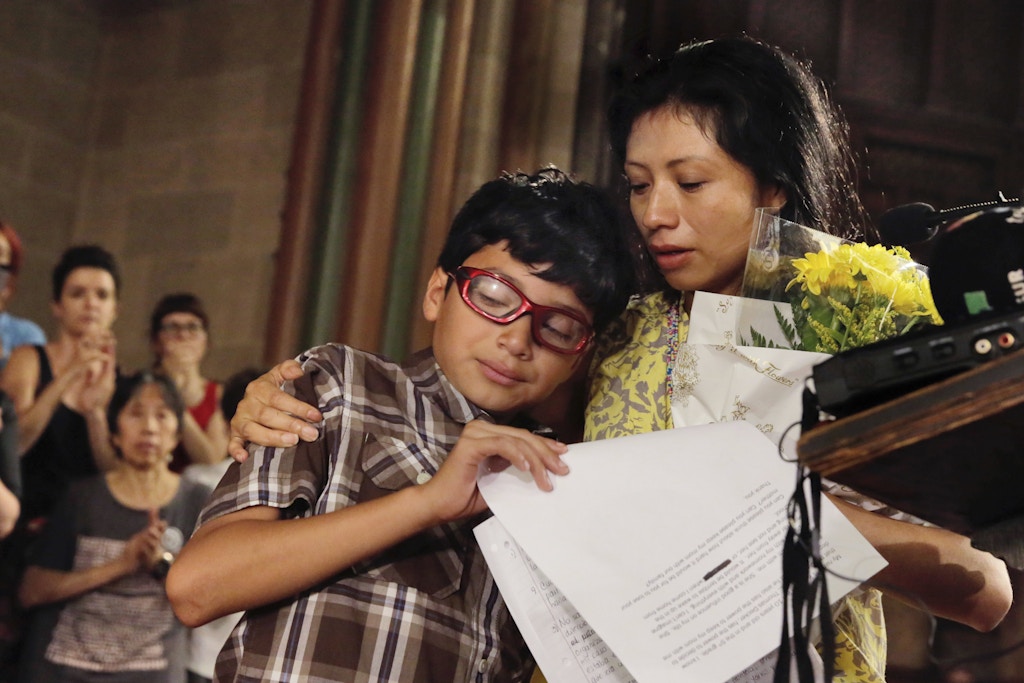 Barrios-Vasquez, an undocumented immigrant from Guatemala, comforts her son, Kener, 10, after he delivered his remarks at the St. Paul and St. Andrew Methodist Church in New York, on June 21, 2018.

At a time when many Americans are up in arms over the Trump administration’s policy of forced family separations at border detention facilities, Barrios-Vasquez’s story highlights the reality that parents and children are being wrenched apart by ICE deportation orders every day and all over the country.

“ICE is attempting to tear families and communities apart every single day,” said Yasmine Farhang, lead immigration attorney at Make the Road NY, an organization dedicated to community empowerment. “Not a day goes by in our communities here in New York City, Long Island, and Westchester that we don’t hear from community members who have had their loved ones taken from them. It is happening at home, in court, while working — and, most recently, at USCIS marriage-based interviews where people are actively trying to adjust their status” — a reference to a spate of deportations following interviews with the U.S. Citizenship and Immigration Services to determine if marriages are legitimate.

“Every day in our communities, children as young as 2, 3, and 4 years old are traumatized by having a parent ripped away from them.”

“Every day in our communities,” Farhang added, “children as young as 2, 3, and 4 years old are traumatized by having a parent ripped away from them.”

Like countless other undocumented immigrants, Barrios-Vasquez has children who are natural-born U.S. citizens. Her son, Kener, does not want to leave his country, foisting an impossible choice on his mother: take her family out of the country and dash her kids’ hopes of growing up to pursue their birthright — the American dream — or let the U.S. immigration authorities put thousands of miles between her and her children. So she took sanctuary.

The concept of sanctuary from immigration authorities was born in the 1980s, as religious congregations rallied to protect refugees fleeing U.S.-backed wars in Central America — migrants hailing from the same countries as many involved in today’s crisis. More recently, the sanctuary movement has been resurrected by the New Sanctuary Coalition of New York, which is involved in the recent case at St. Paul and St. Andrew. The strategy relies on the reluctance of authorities to enter houses of worship, so those houses take in those needing protection from the authorities.

The protection the church offers is delicate — no law precludes ICE from seizing Barrios-Vasquez from inside the house of worship. Agency policy recommends against immigration operations at “sensitive locations” like churches. Recently, though, the barriers have begun to be broken down: Clergy in the New York City area have told The Intercept that ICE agents are increasingly intruding on meetings and religious services, and members of the New Sanctuary Coalition alleged that their movement is under a concerted, unconstitutional attack by the federal government. Nonetheless, congregations and immigrants who take sanctuary with them are gambling that immigration officials will be leery of the kind of news footage government raids on churches would generate. In the current climate, that bet feels increasingly uncertain. Barrios-Vasquez sits with her daughter, Berenice, in the sanctuary of St. Paul and St. Andrew, where she has lived since the beginning of June.

The week before Barrios-Vasquez went public with the press conference announcing her decision to take sanctuary, The Intercept spent an afternoon with her in the room she shares with her daughter at the back of the church, talking about how she came to be there.

It began in 2011, when Barrios-Vasquez was driving her son to the doctor in the neighboring town of Harrison and was pulled over by a police officer. “I asked him, ‘Why did you stop me?’” she recalled. “He said, ‘You’re not the one making questions here.’” The officer wrote her a ticket for failure to keep her son in a seatbelt — she said her son was, in fact, wearing his seatbelt — and for having a signal light out, though she disputed this as well. “He was racist,” she said. “He saw my face and he stopped me.”

After taking her name and birth date, the officer also informed her that she had been under an order of removal since 2005. He made an appointment for her at ICE’s New York City field office for the following day.

Barrios-Vasquez hired a lawyer and began pursuing an asylum claim, all the while checking in with ICE regularly. The asylum application was an uphill battle. When she was released by the Border Patrol in 2005 and moved to New York to be close to relatives, Barrios-Vasquez was told the government would send her notifications on what to do next by mail, but she never received any notifications. By the time she was stopped by the police in Harrison, she had long exceeded the one-year-after-arrival threshold by which she was supposed to have made her asylum application.

The lawyer Barrios-Vasquez hired didn’t seem to be working very hard on her case, so she hired a new one. That lawyer, too, seemed to her to be taking her money only to kick her case down the road. “She didn’t do anything for me in six years,” Barrios-Vasquez said. It was a frustrating time: “I was just trying to stay here, working, paying my taxes, paying these lawyers.”

In the meantime, Barrios-Vasquez’s roots in Mamaroneck were deepening. She got her high school equivalency degree and, after years cleaning offices and working a cash register, she lucked into a job opportunity at the Westchester Community Opportunity Program, or WestCOP, a nonprofit agency that runs early childhood education centers. She was initially nervous that her English wouldn’t be good enough for the job, but Barrios-Vasquez excelled. She began coursework toward a Childhood Development Associate credential and was promoted to teacher’s assistant. She also worked a second job at night. In the coming school year, she planned to enroll at Essex Community College.

Two years ago, she had a daughter, Berenice. Kener, now 10, thrived in Mamaroneck, playing soccer on a local team and discovering an aptitude for math. “He’s a good student,” Barrios-Vasquez said. “He says he wants to build rocket ships for NASA.”

Her lawyer’s strategy of indefinite delay proved to be a losing one. In February, an immigration judge ruled she’d had enough extensions and told her she would have to leave the country by May 18.

As the possibility of deportation began to become more immediate, Barrios-Vasquez introduced her son to the idea that they might have to leave their home and go to Guatemala. “He said to me, ‘Mami, if we do that, then my dreams are gone’” — he still wanted to work for NASA. “I asked him, ‘Why do you say that?’ He said, ‘I was born here, this is my country, and soon I’m going to be in sixth grade. Maybe I could stay here?’”

At this, Barrios-Vasquez said, her heart broke. She could not drag her son to Guatemala. But neither could she leave him. Kener, 10, plays with his sister, Berenice, in the room the church provided as a living space for his mother, Debora.

Barrios-Vasquez remembers watching TV sometime last spring when a news story came on about Aura Hernandez, a Guatemalan woman then taking sanctuary from deportation in a Unitarian church on the Upper West Side. “I would never want to do that to my kids, because they’re getting trauma from it,” Barrios-Vasquez recalled exclaiming at the time.

Now, however, faced with imminent deportation and the prospect of being torn from her children, sanctuary began to look like the least bad option. “If there is a way not to get separated from my kids, I will take it,” she said. “There is nothing more important than having a family together.”

“If it was just me, I would go back. I would leave the country. But I am doing this for my son.”

Barrios-Vasquez and Berenice live together in a room at the back of the church, with blue wall-to-wall carpeting and a bed. The adjustment to life in sanctuary is difficult. “When I first came here, I had a headache for a week, and my bones hurt,” Barrios-Vasquez said. “There’s a lot of stress. You cannot go outside. This place is very comfortable, and I don’t have any words for all that the people of this church are giving. But of course I would prefer to be exhausted outside. In here time is different, days pass slowly.”

“If it was just me, I would go back. I would leave the country,” she said. “But I am doing this for my son. I can’t imagine being in Guatemala and my son being here.”

Sometimes Berenice asks her mother if they can go get some an ice cream, a ritual they used to do together before they took sanctuary in the church. But Barrios-Vasquez knows that stepping outside the church with her daughter is too great a risk. She said, “It hurts me that I can’t do that with her.”

Kener visits her in the church when he can.

“It’s sad, really sad,” Barrios-Vasquez said. “If there is another word worse than sad, I’d use it. When you have time to think about it, you start to cry. Think about being separated from your kids. I don’t think a mother who loves her kids can bear to be separated from them.”

It’s difficult to look forward and see any kind of positive resolution for the situation Barrios-Vasquez and her family now find themselves in. But she is trying to remain hopeful. “I’m a person of faith,” she said. “I believe that Jesus died for us, and what I’m going through is nothing like what he did for us. This won’t last forever. It will end, and when it does, I hope it will end in a happy way.”

Top photo: Barrios-Vasquez and her daughter, Berenice, in the theater of the St. Paul and St. Andrew Methodist Church.