Mal Hyman, a Democrat running for Congress in South Carolina’s 7th District, has been unabashed in his support for Palestinian human rights. 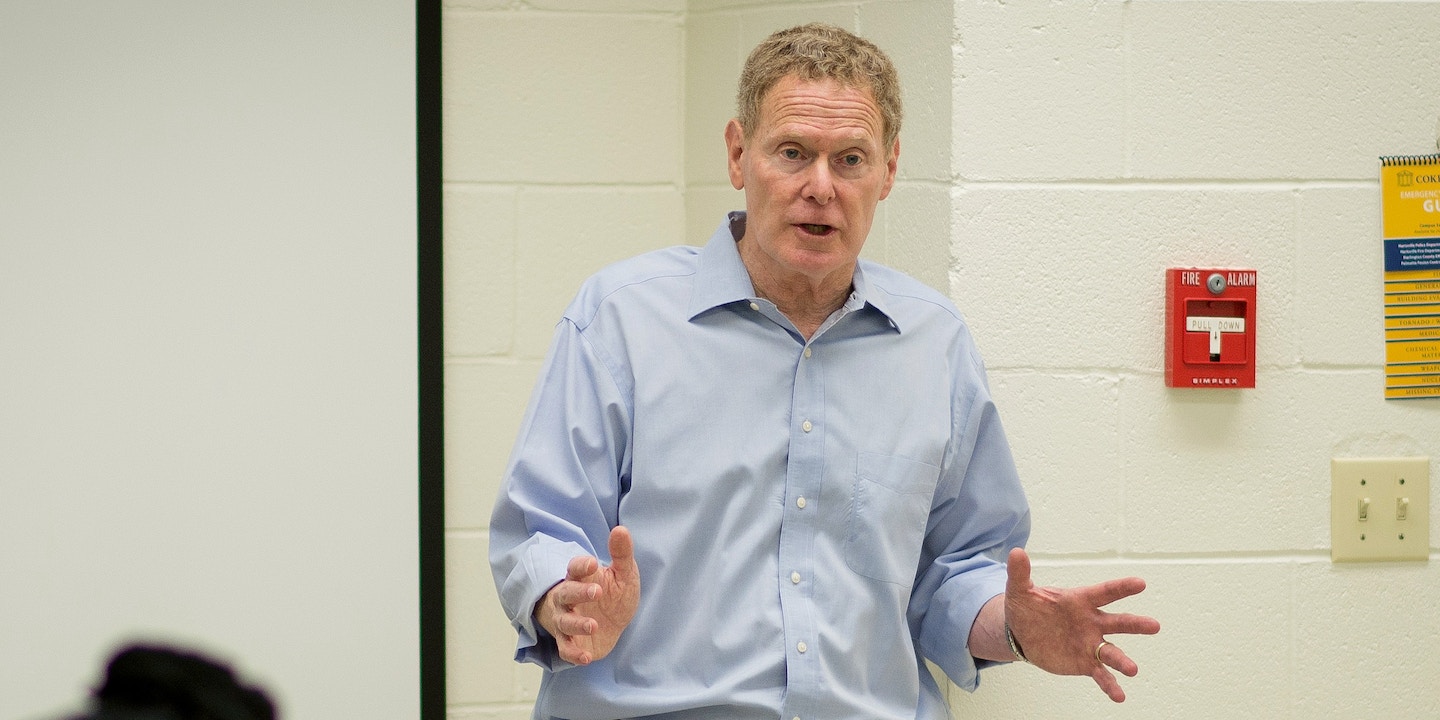 Few lawmakers enter the legislature prepared to debate the ins and outs of arms transfers, trade, or international aid. On issues of war and peace, Congress has more or less abdicated its historical oversight responsibility, choosing instead to defer to the executive branch. But despite its hands-off approach, Congress has rarely been afraid to weigh in when it comes to Israel.

Bills advocating additional military aid to Israel typically sail through the House and Senate, and one-sided resolutions taking Israel’s position almost always pass with a near-majority of congressional support. In fact, one of the biggest taboos on Capitol Hill has been dissenting from lockstep support for the Israeli government. Former President Barack Obama even chose to justify his continued support for Israeli military action during the Gaza war in front of an audience of American Muslims during his White House’s iftar dinner in 2014.

There are some signs this consensus is beginning to waiver. Sen. Bernie Sanders, I-Vt., among the nation’s most popular lawmakers, is an increasingly vocal critic of Israeli foreign policy. In 2016, he broke ranks with other presidential candidates and declined to attend the pro-Israel American Israel Public Affairs Committee conference, choosing instead to deliver a speech criticizing Israeli settlements, as well as “disproportionate” force used by the Israel Defense Forces against Palestinians in Gaza. Potential 2020 candidate Sen. Elizabeth Warren, D-Mass., also voiced criticism of Israeli military actions following the slaughter of Palestinian protesters by the IDF in April.

But criticizing Israel’s military action against Palestine is still a political risk — particularly for the less established.

Hyman has been unabashed in his support for Palestinian human rights. Rather than sidelining foreign affairs, he has made the topic a feature of his campaign.

After dozens of Palestinians were killed by the Israeli military during protests on the Gaza Strip in April, most members of Congress from both major parties declined to offer any public opposition to the IDF’s actions. Hyman, on the other hand, sent out a campaign email highlighting the killings and demanding that the United States broker peace talks.

Despite wearing a blue protective vest, with the word “PRESS” in bold letters, Palestinian journalist Yasir Murtaja was shot in the chest by Israeli forces. He died shortly afterwards. Murtaja, one of the few journalists remaining in Gaza, had been meticulously covering the increasingly deteriorating situation. Last week, thousands of Palestinians in Gaza peacefully marched towards the barricade that segregates Jews from Arabs, to raise awareness of the brutal blockade that has been in effect since 2007. These protesters were also demanding the right to return to their homes which they have been expelled from (mandated by the U.N.) since the 1940s. …

Although the situation in Gaza appears increasingly dire by the day, the US has the power to broker peace talks. … But first, it must abandon its colonial mentality. This kind of directional shift would serve to strengthen America’s image abroad which would, in turn, lead to greater security at home.

According to the fundraising chair for Hyman’s campaign, Esha Krishnaswamy, voters in the 7th District have generally responded well to the candidate’s outspokenness on Israel. “Given the overwhelmingly positive response we got from the email (including an endorsement from a Holocaust survivor), there’s a big disconnect between where the American people are on Israel and where the American media is,” she told The Intercept. In fact, Krishnaswamy said Hyman’s public rebuke of Israeli human rights abuses have helped the campaign fundraise more than any other issue. But that’s not what has motivated Hyman to speak out.

“It’s just an important issue,” Hyman told The Intercept. “[America’s policy on Israel] weakens American security, it weakens the State of Israel in the long run. It’s a gross violation of human rights. And if we don’t speak out against colonialism, it will worsen.” He added, “As somebody that was raised Jewish that sees what’s going on, it’s a little easier for me to raise the issues. So I have a greater obligation to say the obvious.”

But to get a national platform, he first has to get through Tuesday’s runoff.

Two weeks ago, Hyman finished second out of four in the district’s Democratic primary — around 4,000 votes behind first-place vote-getter Williams.

Hyman was the district’s Democratic nominee in 2016, when the incumbent GOP representative, Rice, defeated him by a 22-point margin.

But 2018 is a very different year for Democrats. Just look at the nearby 5th Congressional District: Then-incumbent Republican Rep. Mick Mulvaney easily won the district in 2016 by more than 20 points. But during the June 2017 special election to replace Mulvaney, the GOP held the district by just a little over three points.

“Archie Parnell ran a good race,” Hyman told The Intercept, referring to the 2017 Democratic challenger in Mulvaney’s old district. If the same wave-year dynamics hold in the 7th District, Hyman, while a long shot, may still have a chance. But Hyman also noted that Parnell, a former banker, put around $400,000 of his own money into the race, something that Hyman, a college professor, won’t be able to do.

If Hyman were to win the general election, his background would distinguish him significantly from other federal lawmakers. Before graduate school, he taught at a medium-security men’s prison — an eye-opening experience that he says got him interested in progressive movement organizing.

In 1986, Hyman first traveled to Nicaragua with a group called Witness for Peace. He continued to travel abroad to conflict zones over the next decade. “[I] realized I was learning more from those trips than I was learning from grad school classes,” he recollected. “Each trip, I think I became a little bit wiser and a little bit more bold. By 1989, I volunteered to work human rights with the Arab-American Anti-Discrimination Committee during the first intifada.”

“I saw my country on the wrong side of history, supporting colonial power.”

What Hyman saw in the Israeli-occupied territories had a lasting impact on him. “Being raised Jewish, it couldn’t have been more appalling to see the situation there. I saw my country on the wrong side of history, supporting colonial power. And I saw Israel oppressing people in the West Bank and Gaza,” he told The Intercept. “It further invigorated my interest in trying to do more human rights work.”

He went on to serve as an elections monitor in Nicaragua in 1990 and did similar work in Mexico in 1994. “Those types of trips sensitized me to the challenges in developing countries and the need to thoroughly question our government’s foreign policy,” he said.

Hyman’s knowledge of U.S. foreign policy has informed his approach to issues of national concern throughout his campaign. Though many Democrats have criticized the Trump administration’s approach to immigration, Hyman has released lengthy campaign literature laying out the history of U.S. foreign policy in Central America, positing it as a central factor in the migration crisis. Shortly after the administration ended temporary protected status for thousands of Central Americans, Hyman penned a post on Medium castigating the government for its long-standing complicity in financing violence in the region.

He hopes to bring that insight to Congress some day and aspires to joining the Foreign Affairs Committee.  “I know it’s not the easiest thing to do,” he said, but “I think my background would allow me to hit the ground running.”

His runoff opponent, Williams, is a more typical South Carolina Democrat. His campaign website lacks any issue positions, but his record in South Carolina’s state House is on the more conservative side. In 2017, he netted a 90 percent rating from the South Carolina Chamber of Commerce, the state’s business lobbying group, wining the label “business advocate.” And despite growing acceptance of same-sex marriage over the past decade and the fact that the Supreme Court has made it the law of the land, Williams continues to oppose marriage equality. “I do … believe that a marriage is between a male and a female,” he said at a candidate forum before the first round of voting. He justified his position by citing the fact that it takes a man and a woman to reproduce. (He also said that he “believes we shouldn’t impede on the rights of others.”)

Williams is running for his state House seat and the congressional seat at the same time.

Even if Hyman makes it through the second runoff election, it will be an uphill battle — largely due to the fundraising gap between Hyman and the Republican incumbent. But win or lose, his bid is a sign that Democrats may be able to distance themselves from the policy positions of the Israeli government and still run competitive races for office.

Williams did not respond to an interview request.