Elected Officials From 20 States Join the Call to Abolish ICE

“The experiment that is ICE has failed, and must be ended as soon as possible,” more than 100 officials from 20 states wrote in a statement. More than 100 state and local elected officials from 20 states on Tuesday joined the call to abolish Immigration and Customs Enforcement, adding momentum to a push that, until recently, was dismissed as a fringe left rallying cry. In a joint statement, state legislators, mayors, city council members, and county officials made their demand clear: “The experiment that is ICE has failed, and must be ended as soon as possible.”

State senators and representatives from Arizona, Connecticut, Illinois, New Mexico, Rhode Island, and Illinois signed the open letter, which is being reported for the first time by The Intercept. They were joined by officials from dozens of cities in 14 other states and the District of Columbia.

“While this escalation of policy is particularly devastating and inhumane, it is part of a larger crisis that has been building in our communities for years because of the rampant and brutal enforcement tactics of Immigration and Customs Enforcement, the lawless federal agency that, since its creation in 2002, has terrorized immigrants and separated families in the communities we live in and represent,” the statement reads.

“It’s not an agency that can be fixed or reformed.”

Immigrant communities and rights groups have drawn attention to abuses by the agency for years, but the call to “abolish ICE” has found renewed urgency in the year and a half since Donald Trump took office, and particularly in the two months since the Trump administration began to implement its “zero tolerance” border policy. What was started by some grassroots immigration activists turned into a viral hashtag and eventually became part of the platforms of several progressive Democratic candidates. It even made its way to Congress, where Reps. Mark Pocan, D-Wis., and Pramila Jayapal, D-Wash., have promised to introduce a bill to eliminate the agency.

Helen Gym, a Philadelphia City Council member who signed the statement, said that state and local elected officials joined the movement because they are the ones closest to the ground, which means they see the toll that ICE’s “inhumane tactics” take on immigrant families and communities.

“I think the clarity around ‘abolish ICE’ is important because it’s not an agency that can be fixed or reformed,” Gym told The Intercept. The function of the agency should not simply change names or absorb into a different department, she added, “it needs to be dismantled.” 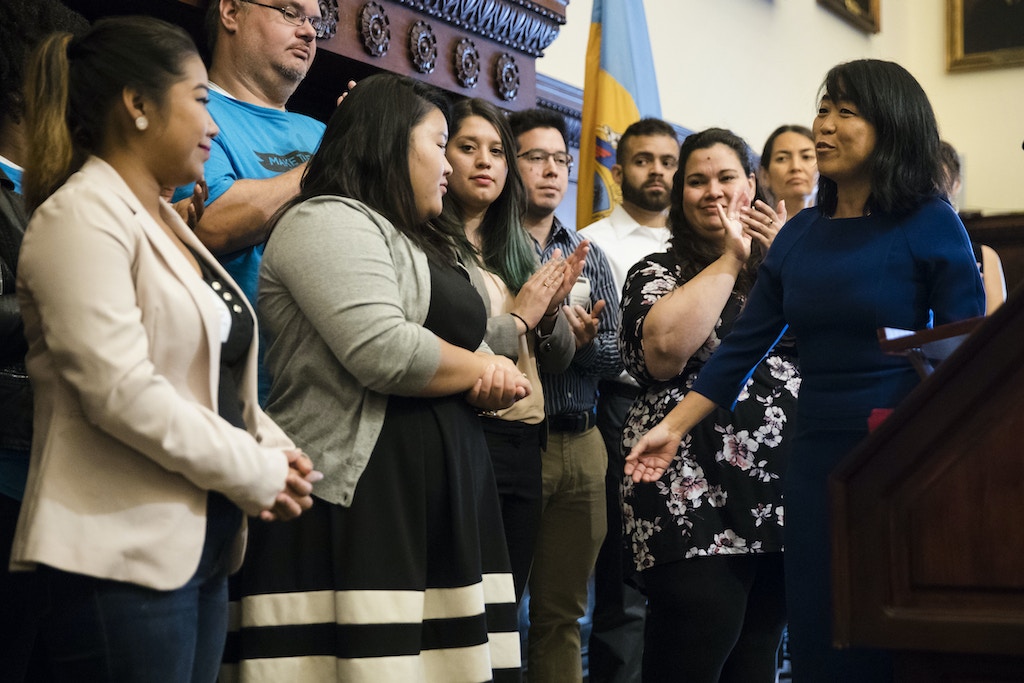 Another signer of the joint statement, Hartford City Council member Wildaliz Bermúdez, said that “instead of spending $6 billion on an agency that terrorizes immigrant communities and raids our schools, local businesses, and places of worship, we should be investing our taxpayer dollars in infrastructure, education, and creating good jobs.”

A number of senators who are presumed to be 2020 presidential hopefuls — Kirsten Gillibrand, D-N.Y., Bernie Sanders, I-Vt, and Elizabeth Warren, D-Mass. — have also joined the push to abolish ICE, but there appears to be no consensus on what the alternative should be. Left-wing activists have proposed a moratorium on deportations, while more moderate Democrats say the agency is simply in need of reform. Still, the odds that Congress will undertake any substantial overhaul of the agency in the foreseeable future are dismal, as lawmakers have so far failed to pass a comprehensive immigration bill, including a fix for DACA, which both sides of the aisle have claimed to support. Nonetheless, the calls to dissolve ICE are quickly shifting the Overton window and bringing a section of the left anchored in maximalist demands into the political mainstream.

Pocan and Jayapal have said they will introduce the abolish ICE bill, which Pocan first announced in late June, in the coming weeks. In a Tuesday statement by the Working Families Party about the letter issued by the state and local officials, Pocan is quoted as saying that Democratic members of Congress want to end Trump’s “use of ICE as a personal deportation force and implement an immigration system that upholds the dignity of all individuals.”

“By abolishing ICE and transferring its necessary functions to other agencies,” Pocan added, “we can ensure that the President can no longer terrorize countless immigrant families, while making our nation safer from actual threats.”

Top photo: Demonstrators march in the Little Village neighborhood calling for the elimination of the U.S. Immigration and Customs Enforcement and an end to family detentions on June 29, 2018, in Chicago.