A rolling hunger strike has been occurring at ICE’s Port Isabel detention center for the past two weeks, as immigrant mothers demand contact with their children. As the July 26 deadline approaches for the government to reunite some 3,000 immigrant parents and children separated under the Trump administration’s “zero tolerance” program, one immigrant detention center in South Texas has been releasing a few people weekly, after they pass their “credible fear” interviews, in which they describe why they are afraid to return to their countries and need asylum. Those who remain have begun resisting the hurtful and disordered conditions of their captivity, some with extreme measures such as hunger strikes.

The Port Isabel Service Processing Center is located about 35 miles from Brownsville and minutes from the Gulf of Mexico, on lonely potholed roads. The facility feels isolated even before one enters its double razor wire-enclosed grounds. Inside, according to detainees, the isolation feels so overwhelming that some have resorted to extreme measures.

The Intercept has spoken to two dozen detainees at Port Isabel since late June. All are women, though the detention center also houses men. Many women complain of feeling completely cut off from the outside world. In some areas of Port Isabel, they say, televisions are turned on, mainly to telenovelas and soccer games — but when immigration-related news comes on, guards lower the volume or change the channel.

It is extremely difficult for the detainees to talk with people outside of Port Isabel by phone. They or their callers must pay for the calls, but speaking over the prison phones is like talking through cellophane or foil. Words tend to be incomprehensible, requiring extremely slow speech, exaggerated diction, and shouting. And calls are frequently dropped.

Everyone complains about the food. On one visit to Port Isabel, I saw a detainee being given her regulation lunch: two slices of white bread with two slices of deli meat without condiments, a small apple, and a 6-ounce bottle of something that resembled Kool-Aid. Breakfast has about the same number of calories, and so does dinner. There are no snacks, no coffee. The same food is served day in and day out. Detainees report that they find the food distasteful and say they still feel hungry after eating. The women who spoke to The Intercept say they are losing weight, and those whose families send them money supplement Port Isabel’s diet with ramen noodles and junk-food snacks for sale at inflated prices in the commissary. But many inmates have no money. 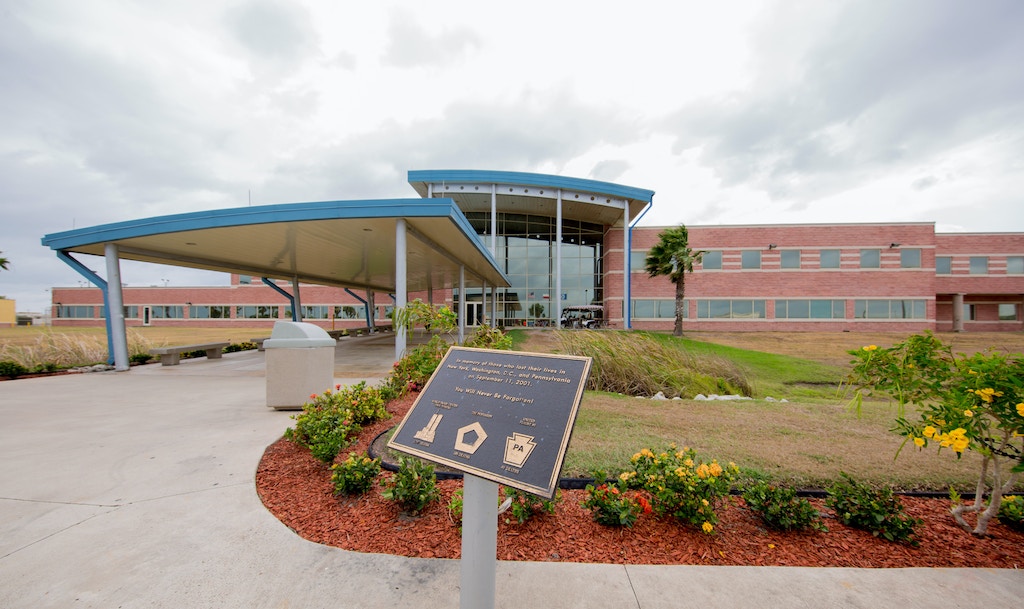 The front entrance of the Port Isabel Detention Center.

Hunger Strikes and Other Desperate Measures

Other inmates have abandoned the food because they are staging hunger strikes. One woman told me that she had been allowed to call her child only once in several weeks of detention. She went on a hunger strike — una huelga de hambre,  as she called it — for two days. As a result, she said, she had gotten one call each day for the previous three days. She said that a rolling hunger strike has been occurring at Port Isabel for the past two weeks, with some 15 women fasting for a couple of days, then eating while another impromptu group fasts. Port Isabel has not made public the number of people it is detaining, but one woman said that each women’s dorm has 25 people in it, and there are five dorms.

Mothers in Port Isabel walk around in a constant state of grief and anxiety, some displaying symptoms of post-traumatic-stress disorder. Most have had only a handful of calls with their children. One said she has been separated from her 12-year-old since early June and has not talked to him even once — nor does she know where he is, except that he is in New York state. Several told me that they have a hard time remembering what day or date it is. Hours after she was released on bond from Port Isabel last week, one woman recalled how she and other detainees got together, discussed their problems remembering what had happened to them even as recently as the day before, and decided as a group to request a visit to the facility’s psychologist. “We were worried we were losing our minds,” she said.

Another women told me that a woman “went crazy” last week, “probably because she couldn’t take the separation from her child anymore.” She became so aggressive in a common room, and so frightening to the other detainees, that she was taken away, possibly, the detainee said, to solitary confinement — a place that the hunger-striking women have been threatened with if they continue fasting.

Several women have reported that they have spoken to volunteer lawyers, including from nonprofit legal assistance organizations such as KIND, or Kids in Need of Defense, and PROBAR. The lawyers have cautioned the women not to sign papers presented to them by Immigration and Customs Enforcement, because such papers may give ICE permission to deport the women with or without their children. It seems that many of the women are heeding the lawyers’ warnings and not signing. One woman told me that when she refused to sign, the ICE official yelled at her. She still did not sign.

But along with resistance has come profound demoralization. A detainee contacted me Wednesday to report that a woman in her dormitory was sitting on her bed sobbing because she had not been reunited with her child, who is 4 years old — though the deadline for reuniting children under age 5 was earlier this week. “They told her she will be joined with him during the ‘second trip’ — el segundo viaje,” the detainee said.

On Thursday, ICE responded to questions about conditions at Port Isabel by emailing a link to a press release, saying that all eligible parents had been reunited with their children by 7 a.m. that day. A woman at Port Isabel told me that the mother of the 4-year-old was taken out of the facility at dawn. The day before, other women had been trying to console the mother. That was difficult, however, because detention rules do not allow the women to hug each other or even to sit on one another’s beds.

ICE did not respond to questions about the hunger strikes at Port Isabel.

I interviewed two women who were released last week from Port Isabel after passing their credible fear interviews. In one case, the woman — who The Intercept is giving the pseudonym Karin  because she fears retaliation — said she was working for a rich family whose daughter is infertile. The family patriarch told Karin that his daughter wanted her two children because “we can give them a better life than you can.” Karin protested that if the family tried to take her kids, she would call the police. The man laughed, she said, and told her that they control the police, and that Karin would be arrested if she complained.

At La Posada, the church shelter in San Benito where Karin and another woman were staying after they were released from Port Isabel, I saw firsthand what condition the two women were in after weeks of detention at the facility.

At first, Karin was unable to speak. Instead, she simply hugged me for several long seconds. The ambient temperature was tropical, but the second woman hugged me as if she were freezing and trying to burrow into something warm. She stayed that way, gripping me tightly, for a few minutes with her head down, and she wept. Then, straightening up, she said she wanted to get back to her child and family in Maryland, and get “healthy again in my mind.”