Kathy Kraninger, an Office of Management and Budget official, skirted around her qualifications and past work at her confirmation hearing Thursday. 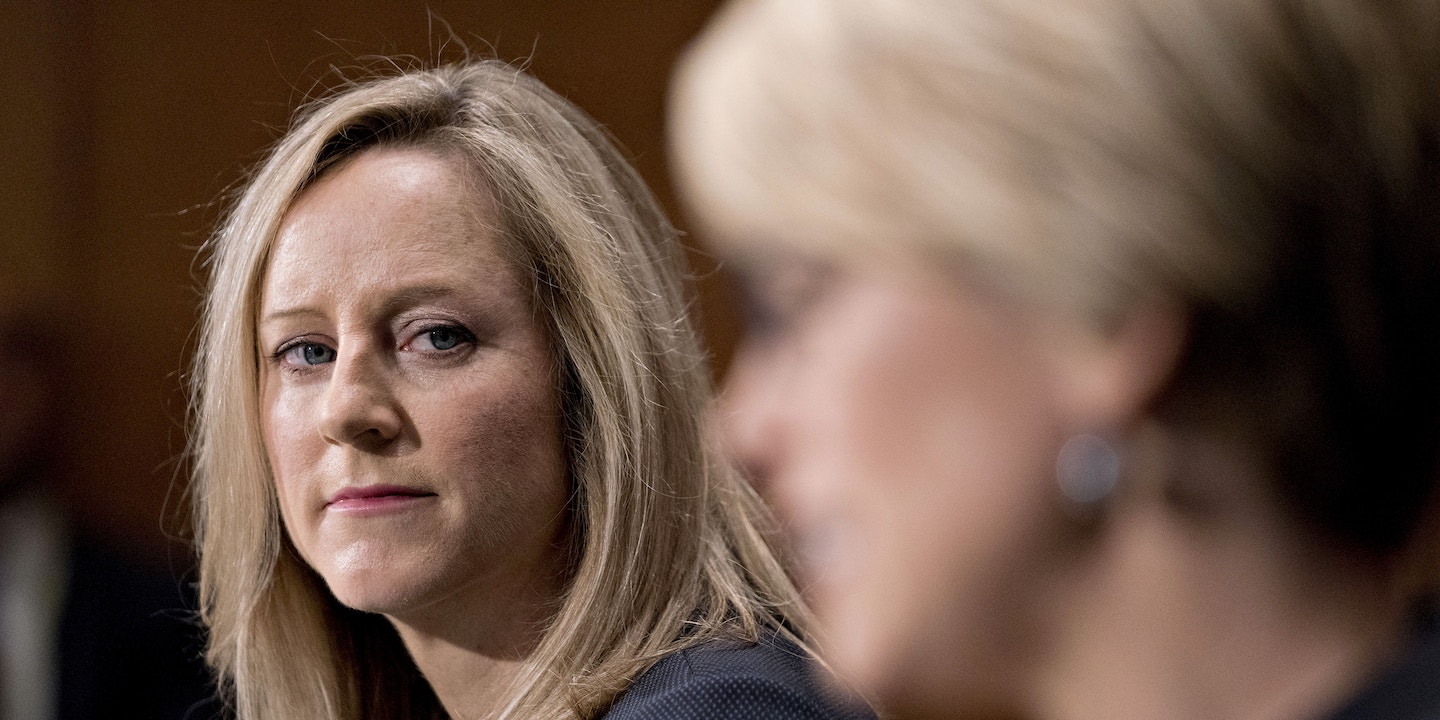 On Thursday, the Senate Banking Committee heard from Kathy Kraninger, an official at the Office of Management and Budget with no background in financial regulation or consumer protection.

Naturally, she has been nominated to run the Consumer Financial Protection Bureau.

During nearly three hours of questioning, Kraninger worked hard to prevent scrutiny of what exactly she did at OMB.

“I am trying to get an answer from you, and I just can’t. And this is maddening,” said Sen. Brian Schatz, D-Hawaii, reflecting a common refrain from banking committee Democrats. Time and again, Kraninger refused to describe any discussions or meetings she’d participated as the program associate director for general government programs at OMB, stressing the need to respect the “deliberative process” inside government.

“If you can’t even tell us what you’re doing on a day-to-day basis, how can we expect you to be accountable at CFPB?” asked Sen. Catherine Cortez Masto, D-Nev.

At OMB, Kraninger happened to be tied to the two biggest humanitarian catastrophes of the Trump administration: the inadequate response to natural disasters in Puerto Rico, and the “zero tolerance” policy at the border that led to separating children from their families and locking them in cages. She has responsibility over the budgets of the Departments of Justice, Homeland Security, and Housing and Urban Development, which have primary responsibility over those matters.

Sen. Elizabeth Warren, D-Mass., the force behind the creation of the CFPB, focused on the “zero tolerance” policy. Kraninger stated that she played no role in setting the policy, but also that she couldn’t describe the advice she had given about it. Warren described this as a contradiction, since giving advice denotes some level of involvement. Kraninger acknowledged that there were meetings on the “general topic” of immigration that she had attended.

“Is that a yes, you were involved?” Warren asked.

“I don’t want to characterize my advice –” Kraninger began, and Warren cut her off, reminding her she was under oath and lying to Congress is a crime. After some more filibustering, Warren asked if Kraninger worked with DHS on a plan for family reunification, which has been slow-going. Again Kraninger declined to characterize her advice, saying it would be a “slippery slope” to start explaining internal discussions.

“It’s a moral stain that will follow you for the rest of your life. If the Senate votes to give you a big promotion after this, then it is a stain on the senators who do so.”

“No, it’s not a slippery slope; you don’t want to characterize because you don’t want to admit that you were part of this,” Warren said. After trying (and failing) to get Kraninger’s opinion on whether ripping children away from parents was immoral, Warren wrapped up. “It’s fundamentally immoral and you were part of it, Miss Kraninger,” she said. “It’s a moral stain that will follow you for the rest of your life. If the Senate votes to give you a big promotion after this, then it is a stain on the senators who do so.”

After the questioning ended, someone in the gallery played the now-infamous tape of children at a detention facility crying, briefly disrupting the hearing.

The theatrics followed a devastating staff report Warren released yesterday, detailing Kraninger’s “record of failure” on family separation and natural disaster response in Puerto Rico. The report highlighted lack of planning, budget overruns, and inadequate OMB requests for disaster relief. The Federal Emergency Management Agency recently admitted its poor response to the devastation in Puerto Rico, a lack of manpower and preparedness that led to potentially thousands of unnecessary deaths.

Earlier in the week, all Democrats on the Senate Banking Committee, including red state Sens. Jon Tester, Joe Donnelly, Heidi Heitkamp, and Doug Jones, asked for a postponement of the hearing, because they had yet to receive any response to document requests around family separation and Puerto Rico. Senate Banking Committee Chair Mike Crapo, R-Idaho, moved forward with the hearing, saying that Kraninger passed on the document request to the White House, and it was otherwise out of her hands.

“There’s no incentive for the White House if we continue on our merry way,” replied Sen. Sherrod Brown, D-Ohio, the ranking Democrat on the committee. “Why should the president change his behavior if there’s never a price to pay?”

About the only time Kraninger ever gave a straight answer was to a series of rapid-fire questions from Heitkamp, D-N.D. Kraninger admitted that she has never worked in any financial capacity, either at a bank or a credit union, or as a regulator. She has had no supervision responsibilities over payday lenders, credit bureaus, insurance companies, or debt collectors. She has no experience with the Equal Credit Opportunity Act, the Truth in Lending Act, or any other consumer protection law. She couldn’t remember any law school classes involving consumer protection. She did claim to have worked once, while in college, on a financial literacy program.

“The point I’m trying to make is that this is a highly technical job,” Heitkamp said. “We ought to have somebody who has experience … and who has empathy.”

In a second round of questioning, Warren tried to pin down Kraninger on a nonbinding budget she has drawn up for the CFPB, even though the bureau gets its funding from the Federal Reserve. That budget called for a $147 million cut to the CFPB, a drop of about 23 percent of the total. Kraninger struggled to identify any specific area that should be cut to get to that number and also tried to disclaim responsibility by calling it “the president’s budget request.” To Warren, Kraninger’s answers didn’t “reflect any knowledge of the CFPB or any commitment to the central mission of trying to protect consumers and level the playing field.”

Kraninger’s main qualification to run the CFPB appears to be her close relationship with Mick Mulvaney, her boss at OMB.

Kraninger’s main qualification to run the CFPB appears to be her close relationship with Mick Mulvaney, her boss at OMB and the current acting director of the bureau. There’s an expectation that she will continue his work of hobbling the bureau’s ability to function. Mulvaney has famously dropped cases against several financial operators and engaged in precious little enforcement. He stripped power from the bureau’s lending discrimination unit and disbanded the bureau’s consumer advisory board.

While Kraninger testified, Mulvaney’s CFPB announced a settlement with Triton Management, a Mississippi auto title lender accused of lying to customers about add-on finance charges. The CFPB calculated that Triton concealed $1.5 million in finance charges to customers, but allowed the company to pay only $500,000 to those affected by the rip-off. In other words, CFPB sentenced Triton Management to making $1 million in illicit profit.

It was the second time in a week that Mulvaney’s CFPB has essentially discounted a corporate offender on their fine for breaking the law.

CFPB directors get a five-year term, meaning if Kraninger were seated tomorrow, she would serve through July 2023, well into the next presidential term, whether a Republican or Democrat sat in the Oval Office. Delaying that clock gives a Mulvaney-style deregulator more time in the director’s chair. “Senators face a horrible dilemma: either approve a pawn of Trump, Mulvaney, and financial industry predators, starting the clock now on a grim five-year term, or risk starting the clock later with a different nominee who’s even worse,” said Public Citizen’s Bartlett Naylor in a statement. “Either way, Americans lose.”

Kraninger does have a few deep-pocketed backers. The front group Protect America’s Consumers has been promoting Kraninger. The CFPB’s own Chief Communications Officer John Czwartacki linked to their website on Tuesday, which the group Allied Progress sharply criticized, alleging that Czwartacki had advance knowledge of the effort.

Protect America’s Consumers appears to be a creation of Lincoln Strategy Group, a group headed by scandal-ridden GOP operative Nathan Sproul, who has been tied to several instances of destroying Democratic voter registration forms. The group previously attacked the CFPB in advertisements, using out-of-context critiques from Democrats to give the impression of bipartisan opposition to the agency as a whole. Most recently, Lincoln Strategy managed a failed campaign to deny tipped workers in Washington, D.C. a $15 an hour minimum wage.

Top photo: Kathy Kraninger listens during a Senate Banking Committee confirmation hearing in Washington, D.C., on July 19, 2018. Kraninger, a little-known official who has worked for the White House’s Office of Management and Budget since March 2017, is poised to succeed her boss Mick Mulvaney as director of the CFPB.