The Intercept found a couple who remained separated from their daughters, ages 15 months and 4, suggesting other young children remain lost in the system. In South Texas, over the last week, chaos has prevailed in immigration detention centers housing parents who were separated from their children in May and June under the Trump administration’s “zero tolerance” program.

Maria de la Cruz Hernandez Lopez was released on bond Monday evening, just as the parent-child reunifications were beginning at the Port Isabel immigration detention center, near Brownsville. Hernandez was separated from her 9-year-old daughter in early May. She was one of the first detainees to speak to a judge about child separation, during a mass trial in Brownsville at which she was a defendant. Now she is preparing to reunite with her daughter in North Carolina.

Hernandez said she witnessed several reunions before she was released from Port Isabel. “With children over the age of 6,” Hernandez said, “it was a happy experience because the kids recognized and went to their mothers. But the younger children, the 5 and 6 year olds — they wouldn’t look at their moms, only at their social workers. The mothers were devastated.”

Parents are not always reunited at the detention center where they have been incarcerated for weeks. Many have been moved from one detention center to another without being told why — it could be that they’re being collected for deportation, or that they are being readied for transport for reunification at another ICE facility.

There seems to be little rhyme or reason for who goes where. At Port Isabel one mother failed her “credible fear” interview and was sure when she was called out of her dorm by detention officials that she would be deported. Instead, she was reunited with her two children, ages 10 and 12, then transported to a shelter 60 miles away — where she was left with no money and no way of getting herself and her children to Kansas, where her partner lives.

Bety Mena Torres, a separated mother who also failed her credible fear hearing, ended up at detention center in Pearsall, Texas on Saturday, after being taken from Port Isabel a day earlier. She effectively disappeared during that time from ICE’s official custody list, terrifying her mother for the 24 hours it took to list her again at her new location, as well as her attorney, Ofelia Calderon, who had filed a stay of deportation on Mena’s behalf.

Mena was distraught by the time she communicated from Pearsall with her family and The Intercept. She wept as she talked about not having seen her 5-year-old daughter since she was apprehended in June, and about how as a victim of severe beatings by mafiosi in Honduras who wanted her to launder money through her clothing store, she was convinced that she would be murdered if she were deported back to her country.

On Wednesday afternoon, according to another inmate who called The Intercept, Mena was removed from the Pearsall detention center without being told why she was being taken or where she was going. Would she be reunited with her daughter, or deported? Transported to joy with her child, or plunged into a deeper nightmare? The chaos surrounding these moves is stunning, and terrifying.

Amid the chaos, it seems that not even the youngest of children or their parents are exempt. Last week, as the Department of Homeland Security struggled to comply with a court order to reunite immigrant children under age 5 with their mothers and fathers, the government gave an accounting of 103 immigrant “tender age” children it had identified. The government said that 57 “eligible” children had been reunited with their parents, but that 46 were still separated, either because the parents had serious criminal records, communicable diseases, or had been deported. Eleven parents were locked up in federal and local jails, for what the government vaguely called “other offenses.”

But The Intercept learned over the weekend of a mother and father who are not ill, who say they do not have criminal records, and have not been deported. Nonetheless, they remained separated from their 15-month-old daughter, who was breastfeeding when taken from her mother, and another daughter who is 4. The Intercept asked ICE, DHS, and Health and Human Services why these little girls remained in a shelter, instead of being reunited with their parents. The agencies were given names, dates of birth, and other identifying information. None responded with information about the children.

We also contacted the American Civil Liberties Union, who litigated the lawsuit leading to the court decision mandating return of tender age children by July 10. We asked if the two little girls’ names appear on the government’s list of 103 children who were separated. Lee Gelernt, deputy director of the ACLU Immigrants’ Rights Project, said that his organization and others who possess the list are prohibited from publicly discussing whether a name appears on it.

It’s thus impossible to know why these two very young sisters had not been reunited with their parents. But reunification likely failed to happen because neither the government nor the immigration civil rights advocacy groups knew about the children. While the scramble was on in late June and early July to match kids in shelters with parents in detention, this family may have fallen through the cracks in a process now known to be notoriously inefficient and chaotic. The Intercept discovered the little girls purely by accident, while interviewing a detainee about unrelated matters, which suggests that there may be many more tender age children than the 103 the government knows about — and many who remain separated from their mothers and fathers.

The separated baby is Mia Sharloth Fuentes Maradiaga; her 4-year-old sister is Brithany Fuentes Maradiaga. They are the children of Jennifer Maradiaga Peraza and Carlos Alberto Fuentes Maldonado of Honduras. According to Jennifer Maradiaga, the family left home this spring because Fuentes was shot at and threatened with death by a gang in a case of mistaken identity. She said that neither she nor her partner has ever been in trouble with the law.

The couple and their children traveled through Mexico and ended up at Piedras Negras, a Mexican city just across the border from Eagle Pass, Texas. There, they tried to cross the Rio Grande. Maradiaga said the river was frighteningly deep, and once they got in, she and Fuentes started to worry that the children might drown. So they exited the water and approached a bridge used by railroad trains to traverse the border. The family climbed onto a train, but they were observed and apprehended by Border Patrol agents.

Up and down the border, most Central Americans who cross into the U.S. for the first time without papers are charged in federal court with the misdemeanor crime of illegal entry. In theory they can be punished with six months of prison and a $250 fine. But in practice, even under “zero tolerance,” federal magistrate judges generally sentence defendants to “time served,” meaning that immediately after their mass trial in criminal court, they are sent to immigration detention centers run by ICE. Once parents notify ICE officials about the children taken from them, ICE is supposed to coordinate with the Office of Refugee Resettlement, the federal agency responsible for the children.

But Maradiaga and Fuentes were sentenced to 25 days in a jail where, as Maradiaga put it, “We were mixed up with criminals like smugglers, even though neither of us has ever committed a crime or been in jail.”

Maradiaga said she suspects that she and her partner received the heavy punishment of jail time, which delayed their contact with ICE for weeks, because their children were wet with river water when they were apprehended. Or maybe, she said, they were punished more severely because they’d climbed onto a train. Her suspicions cannot be substantiated from court records. The language and statutes of the parents’ records look identical to those of other immigrants caught crossing the border illegally. There is no mention in the records about child endangerment or anything about railroad cars.

On July 11, the couple completed their jail sentences and were moved to an immigration detention center called South Texas, in Pearsall, about an hour from San Antonio. The previous day had been the deadline for reuniting parents in ICE custody with children younger than 5.

Neither parent had been able to speak with the children since being separated from them in mid-June. But Maradiaga’s mother lives in the U.S. and communicates with the little girls via video chat. They are at a Southwest Key shelter in Youngtown, Arizona. Brithany, the 4-year-old, used to love chatting with her grandmother on WhatsApp, Maradiaga’s mother said, but no longer wants to. “She was a talkative child,” she said. “Now she only says, ‘I don’t want to talk. It bores me.’” The baby, Mia Sharloth, does not smile as she used to do. Instead, she stares at the floor. Her face has mucus on it, as though she has a cold. She looks noticeably thinner than before the family was separated, probably, her grandmother says, because she is no longer breastfeeding. She looks depressed and spent. 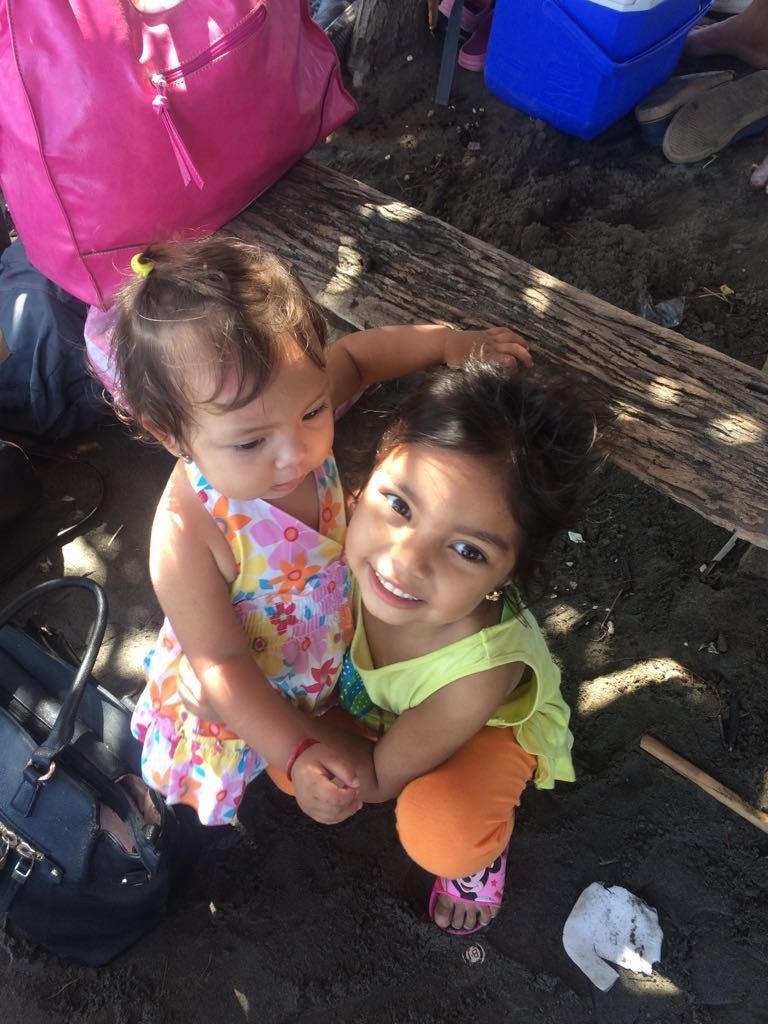 Mia Sharloth, Brithany, and their parents came to the attention of The Intercept on July 14 — two days after the government issued its announcement about the 103 children separated — during an interview with Bety Mena Torres, the woman who fears deportation because of the beatings she suffered by money launderers. Mena mentioned that she had just spoken with the girls’ mother and learned that two children under 5 years of age remained separated from their parents.

Mena then connected Maradiaga to me. “I also went to an ICE official at the detention center,” she said on Sunday, “and told him about this family. He seemed surprised. He came into the women’s dorm and started asking the mother a lot of questions about her children’s names and ages. I was afraid the official was angry with me. But I’m going to ask around and see if I can find more parents separated from their babies.”

On Wednesday afternoon, according to the grandmother of the two children under 5, Maradiaga was notified at the detention center in South Texas that she would be immediately flown to Arizona to reunite with her little girls.

Also on Wednesday afternoon, Mena was removed from the same detention center, without being told why. Regardless of what happens to her, she likely will not be finding any more parents still separated from their children.