Tulsi Gabbard has not debated a primary opponent since she was first elected to Congress in 2012. Hawaii voters are starting to take notice. 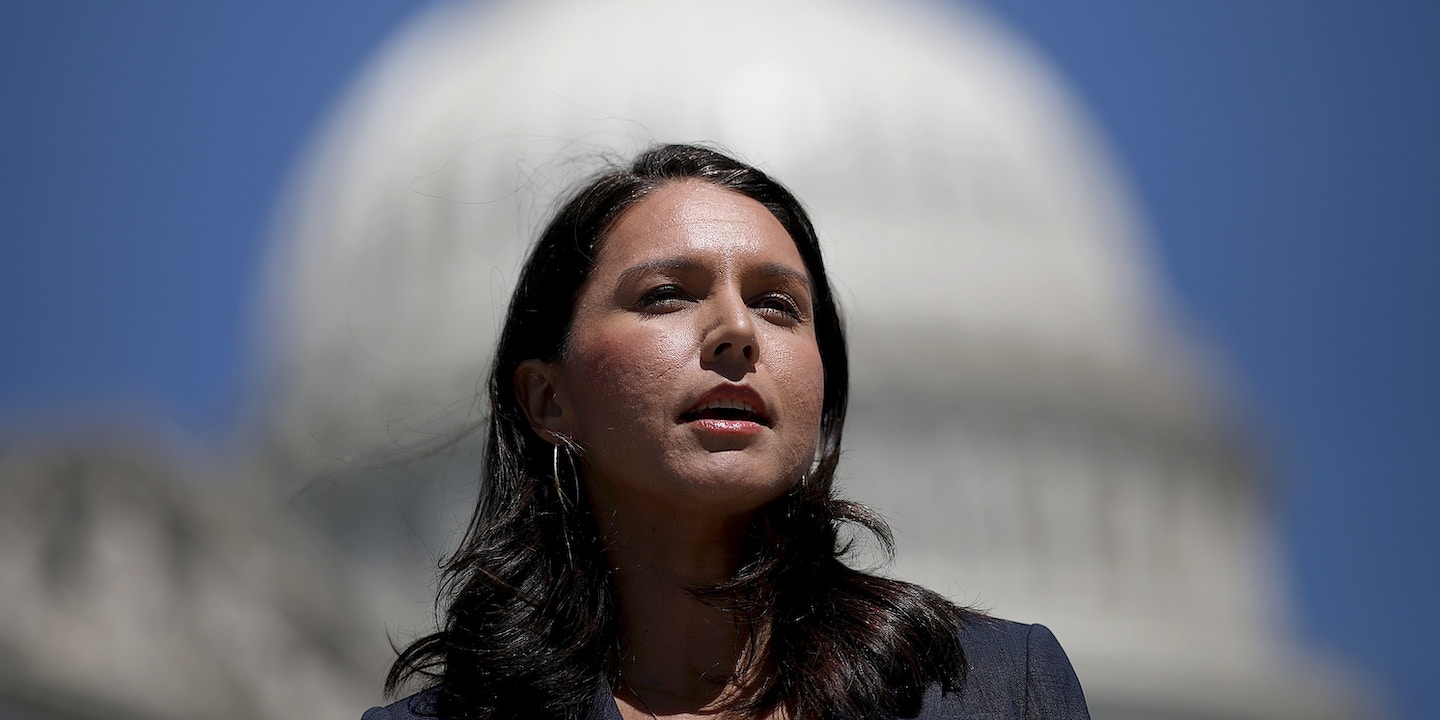 Rep. Tulsi Gabbard, an Iraq War veteran who has represented Hawaii’s 2nd Congressional District since 2012, is one of the most popular politicians in the state. Up for re-election, she is expected to cruise past her primary opponents and go on to victory in the general election. Despite that — or, some observers say, because of it — she has refused to debate her challengers.

The representative, who will be challenged by two Democrats in the August 11 primary, has not participated in a primary debate since her 2012 election. (She did not face a primary challenger in 2014.) Constituents and the local press have taken note of the issue, which has been widely publicized by Gabbard’s political opponents, who are also pointing to her controversial positions on human rights issues as a red flag. Gabbard’s campaign did not respond to The Intercept’s request for an interview.

Hawaii News Now has been trying, for over a month now, to arrange a debate between the candidates, but Gabbard has declined to participate. In early July, candidates running for governor, lieutenant governor, and Congress in the state’s 1st District all gathered for a “super debate.” The local news outlet also tried to organize a debate between Gabbard and Sherry Alu Campagna, Gabbard’s best-known challenger, but the incumbent declined to appear. Her campaign told Hawaii News Now in an email that “Tulsi will not be participating in a debate as she continues to communicate directly with voters across the district.”

Campagna, an environmental scientist and business owner, said that by evading debates, Gabbard is preventing constituents from holding her accountable for her “sketchy alliances” with foreign dictators. “Her voting record and her international policy would certainly crack her front-facing persona, and I know that she doesn’t want that to happen,” Campagna said.

If elected, Campagna would be the first Native Hawaiian woman in Congress. She is campaigning on issues like bettering the environment and alleviating homelessness, along with staples of the progressive movement like “Medicare for All” and campaign finance reform.

It’s not just Campagna who thinks Gabbard’s participation in a debate is key to the democratic process: 76 percent of likely primary voters said Gabbard has an obligation to debate her political rivals, according to a recent Honolulu Star Advertiser poll.

Gabbard herself has previously acknowledged the importance of political debate. In 2015, as vice chair of the Democratic National Committee, she called for additional Democratic presidential debates beyond the six that were scheduled. She later said she was disinvited from the first one as retaliation for her calls for debate.

“It’s very dangerous when we have people in positions of leadership who use their power to try to quiet those who disagree with them,” Gabbard said at the time. “When I signed up to be vice chair of the DNC, no one told me I would be relinquishing my freedom of speech and checking it at the door.”

That year, Gabbard made an early endorsement of Bernie Sanders, which led her to step down from her role at the DNC. That, combined with a consistently left voice on domestic issues like health care and the environment, has fostered her reputation as one of the more progressive House Democrats. Gabbard has been endorsed by Our Revolution, Our Revolution Hawaii, Sierra Club, Planned Parenthood Action Fund, and a number of labor unions.

“Our Revolution Hawai`i is enthusiastic to announce our endorsement for Congresswoman Tulsi Gabbard after meeting with her to talk about our platform issues,” the group said in a statement. “Tulsi is a courageous representative who serves our country in uniform while also fighting for her constituents on many of the progressive issues that Our Revolution stands for, including the rejection of campaign contributions from political action committees and her work for criminal justice reform, affordable housing and healthcare, and so much more.”

Outside of cultivating her image as an anti-interventionist, however, Gabbard has urged a continuation of the so-called war on terror. She’s also won the approval of some conservatives and members of the far right. Former White House chief strategist Steve Bannon reportedly arranged her November 2016 meeting with President Donald Trump, and former Ku Klux Klan grand wizard David Duke has praised some of her foreign policy positions.

Progressive activist Shay Chan Hodges, who ran against Gabbard in 2016, said she thinks the incumbent is avoiding debate because she simply can’t defend her positions on human rights issues. Gabbard was also evasive with Chan Hodges in 2016, refusing to debate despite several requests to do so. “She’s not responsive to the constituents, and she’s not transparent, and I don’t think she has the ability to defend her positions,” Chan Hodges said. 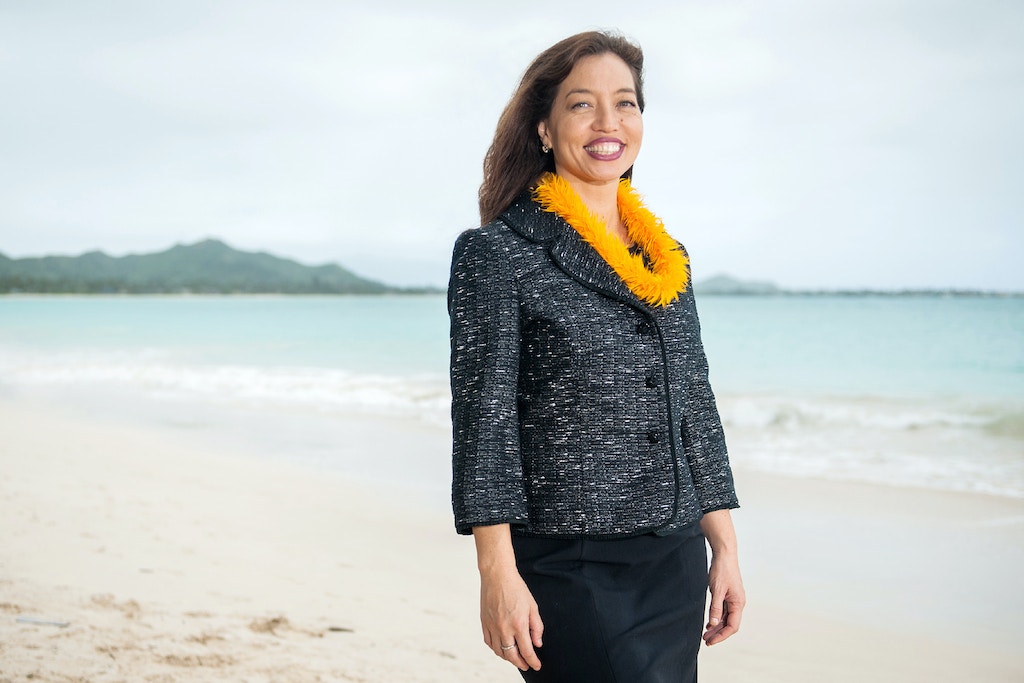 Gabbard has a clear electoral advantage. Not only is she a popular incumbent, but also, as of July 22, she had raised $1.2 million this election cycle with more than $2 million cash on hand, according to Federal Election Commission filings. Campagna, meanwhile, has only raised about $27,000. Anthony Tony Austin, a small business owner who is also running in the primary, reported raising $555.

Nonetheless, voters in the district are beginning to express their discontent with her record, particularly in the arenas of foreign policy and human rights.

In May, the Hawaii State Teachers Association — the fourth-largest union in the state — put its support behind Campagna. HSTA President Corey Rosenlee said in a news conference that Gabbard “has not defended human and civil rights during her time in Congress,” citing her 2017 visit with Syrian President Bashar al-Assad and her failure to denounce Assad’s chemical attack on his own people. Rosenlee told the Honolulu Civil Beat that Gabbard is “fine” on education, but that the union could not get past her “continued lack of fighting for human and civil rights.”

Gabbard was one of few U.S. lawmakers to publicly question if the Assad regime was responsible for an April 2017 chemical weapons attack that killed dozens of people. “If President Assad is found to be responsible after an independent investigation for these horrific chemical weapons attacks, I’ll be the first one to denounce him, to call him a war criminal and to call for his prosecution in the International Criminal Court,” she said at the time. In October, a United Nations body issued a report blaming the Assad regime for the April attack, officially naming the government as a perpetrator of a chemical weapons attack. Gabbard has not publicly revisited her stance since then.

Her willingness to challenge American interventions in countries like Iraq and Libya has cultivated her anti-war image. But she simultaneously holds foreign policy positions close to Trump’s. Gabbard has praised Egyptian strongman Abdel Fattah el-Sisi, who Trump called a “fantastic guy.” She was a skeptic of the Iran nuclear deal (though she eventually supported it), and she has been a vocal supporter of India’s far-right leader Narendra Modi. Her decision to meet with Assad last year in a undisclosed trip to Syria rattled both sides of the political aisle and drew accusations that she was giving legitimacy to a war criminal. She defended her meeting at the time, saying it was a mission of peace.

“When you have a typical voter, and they just reflexively tell you that they’re gonna vote for Tulsi, and you ask them what she’s done for Hawaii, they can’t name anything,” Campagna said. “And then you ask them why they think people might not vote for her, and they say, ‘Well, maybe because she went to Syria.’ And they think that it was not a wise decision, but they also can’t put their finger on exactly why it’s not a bad decision. It’s very interesting how that plays out here among the typical, everyday voter. It’s troubling, really.”

Like Trump, Gabbard is fixated on the use of the controversial term “radical Islamic extremism.” Her singular focus on linking Muslims to terror has carried into policymaking as well. In 2015, she was one of 47 Democrats to join Republicans in passing the Security Against Foreign Enemies Act, a bill derived from heightened fear in the aftermath of the deadly Paris attacks which would have effectively blocked refugees from war-torn Syria and Iraq. (The bill did not make it through the Senate and never became law.)

Because of the attention and energy Gabbard gives foreign policy, Campagna argued, the congressional representative is neglecting the issues of her constituents in her largely rural district. “This is an issue that happens in politics anywhere there’s rural voters,” Campagna said. “Oftentimes politicians will sweep in, take the seat. They can count on rural voters to be very gritty and kind of ‘pull yourself up by your bootstraps’ kind of folks — they’re easy to ignore, and then you position yourself for something higher. She’s courted Bernie Sanders, and she’s going to continue on her merry way to angle for the next higher thing.”

Gabbard has a political memoir scheduled to publish after the midterm elections. That places her in a squad of rumored 2020 Democratic contenders — including Sanders, California Sen. Kamala Harris, and New York Sen. Kirsten Gillibrand — with books on the way.

Top photo: Rep. Tulsi Gabbard, D-Hawaii, speaks at a press conference on House Resolution 922 outside the U.S. Capitol on July 18, 2018, in Washington, D.C.