Republicans Who Oppose Teacher Protests Are Losing Their Primaries, Even in Red States

In the wake of historic teacher strikes, Republicans who ignore educators’ concerns face trouble at the ballot box. A longtime opponent of the state’s teachers unions, he told a local newspaper that he wasn’t worried about any political ramifications of the strike. “I can’t say that it will have zero effect, but I don’t think it’ll have any significant effect because, more often than not, they probably weren’t voting on the Republican side of the aisle anyways,” he said of the state’s teachers.

Essentially, Karnes bet against his constituents’ interest in education funding. And they called him on it.

Karnes lost his May primary election, winning only 3,749 votes compared to Republican Del. Bill Hamilton’s 5,787 votes. Hamilton was an opponent of right-to-work laws and expressed sympathy for the teachers strike. He secured the support of labor groups like the West Virginia AFL-CIO and the West Virginia Education Association Political Action Committee; altogether, organized labor contributed around $10,000 to his campaign.

“I think that teachers showed their political power in the primary,” Edwina Howard-Jack, a local high school teacher, told The Intercept. “Teachers showed up and they were voting in their ’55 United, 55 Strong’ shirts. … Once the results started rolling in, it was phenomenal. Teachers were really empowered to say: If we stick together, we can make a difference.’”

Karnes’s defeat was far from a one-off. Across the country, teachers have been getting heavily involved in Republican primaries to change the party’s stance on public education from within, and their successes suggest that Republican incumbents ignore the concerns of educators at their own risk. Teachers from across Kentucky gather inside the state Capitol to rally for increased funding and to protest changes to their state-funded pension system in Frankfort, Ky., on April 13, 2018.

Like Karnes in West Virginia, Shell underestimated the strength of the public education vote. “We’re talking about a small fraction of people who are acting the way we are seeing,” Mr. Shell told the Associated Press about the teacher protests just a couple weeks before the election. “The majority of people, whether it be teachers or the general public, people understand that we had a problem that we had to fix.”

Brenda spent just shy of $20,000 on his campaign, compared to Shell’s $126,000. But a 6-to-1 funding advantage wasn’t enough to stem the tide of public anger surrounding his support of a bill which forced teachers into an unfavorable retirement plan.

Although Brenda’s website reveals that, in many ways, he is a standard-issue pro-life, pro-gun rights Republican, his campaign also branded him as “an educator, not a politician.” The top item on his agenda was protecting public education.

“There was no coordinated effort to recruit educator candidates,” Kentucky Education Association president Stephanie Winkler told The Intercept. The state’s main teachers union offered support to teacher candidates, but did not go out and actively recruit candidates to run. “I think it was just issue-based. There were so many people fed up and upset with how the legislature had been disregarding education issues for so long,” she said.

Winkler says the KEA didn’t hesitate to participate in a Republican primary, because the organization’s commitment was to principles over politics.

In all, a dozen teachers won Democratic and Republican primaries in Kentucky this year. 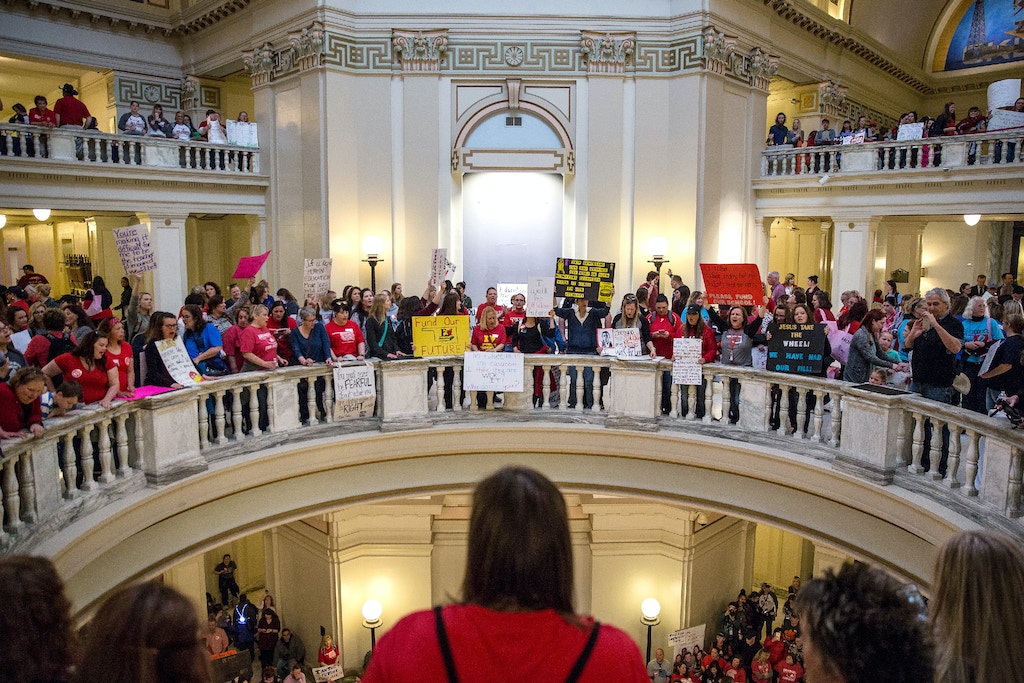 Teachers and demonstrators hold signs during a rally inside the Oklahoma state Capitol building in Oklahoma City, on April 3, 2018.

In response, the GOP-led legislature voted to increase taxes on cigarettes, fuel, lodging, and oil and gas production in order to fund pay raises and avert a strike. On average, teachers got a $6,100 annual pay raise. And the tax increase put into effect to pay for it was the first major tax increase the state has had in a quarter-century.

David Blatt, the executive director of the Oklahoma Policy Institute, noted that the lawmakers had to clear a stiff hurdle in order to pass it. “Oklahoma requires a three-quarters vote of the legislature to pass a tax increase, and they were able to get that three-quarters support through our Republican-dominated legislature,” he told The Intercept. “And somewhat surprisingly, I guess, it’s the Republicans who voted against the tax increase who are, for the most part, facing the strongest primary challenges.”

During the June 26 primaries, 10 Republicans who opposed the tax increase package were up for re-election. Two of them, Reps. Scott McEachin and Chuck Strohm, were defeated by Republican primary challengers. Seven others failed to secure enough votes to win their primaries outright, and will compete in a runoff election tonight, August 28.

In contrast to Ritze, May is backed by several teacher and labor organizations, including the Oklahoma Retired Educators Association and the Oklahoma Public Employees Association. “My opponent is not very education-friendly,” May said in an interview with The Intercept. Coonce has also endorsed May, citing his views on teacher issues. “After talking with Stan, I think he’s our next step for education, moving into this race,” he said.

Ritze defended his votes against the tax hikes. “I voted for the teacher raise,” he said. “But the taxes, I felt like that was overkill. We had the money for the raises. Some cuts could have been made.”

He told a local Republican group that some of the protesters were “probably not teachers,” and implied that some may have been paid by liberal financier George Soros.

Blatt, who has followed Oklahoma politics for decades, told The Intercept that there is a new trend emerging among Republican primary voters. “What we’re seeing is that within the Republican Party, the candidates who are seen as pro-education, and who were willing to support tax increases to pay for teacher pay raises, are for the most part doing better, and the Republicans who are not seen as sufficiently pro-education are facing challenges,” he said.

When The Intercept asked May if he finds Republican voters to be supportive of tax increases in support of teachers, he affirmed that most were. “The majority of ‘em do. There’s a few that are for no tax increase regardless, you get a few of those,” he said. “The way the primary came out, it was obvious that most of the voters were sympathetic to the fact teachers needed a raise.”

He estimated that turnout among teachers in the primaries was double what it normally was. “Is that going to be a trend going forward? That’s the reason teachers are out in force across the state. To make sure that they’re going to vote from now on,” he said.

In a recent article, Tulsa World noted that no Oklahoma lawmaker who finished in second place in the first round of voting has won a runoff in over 20 years.

Top photo: Teachers hold a rally outside the Senate Chambers in the West Virginia Capitol on March 5, 2018, in Charleston, W.V.