Health care is a top issue of voters, and it came up often in this week’s Delaware Senate debate. 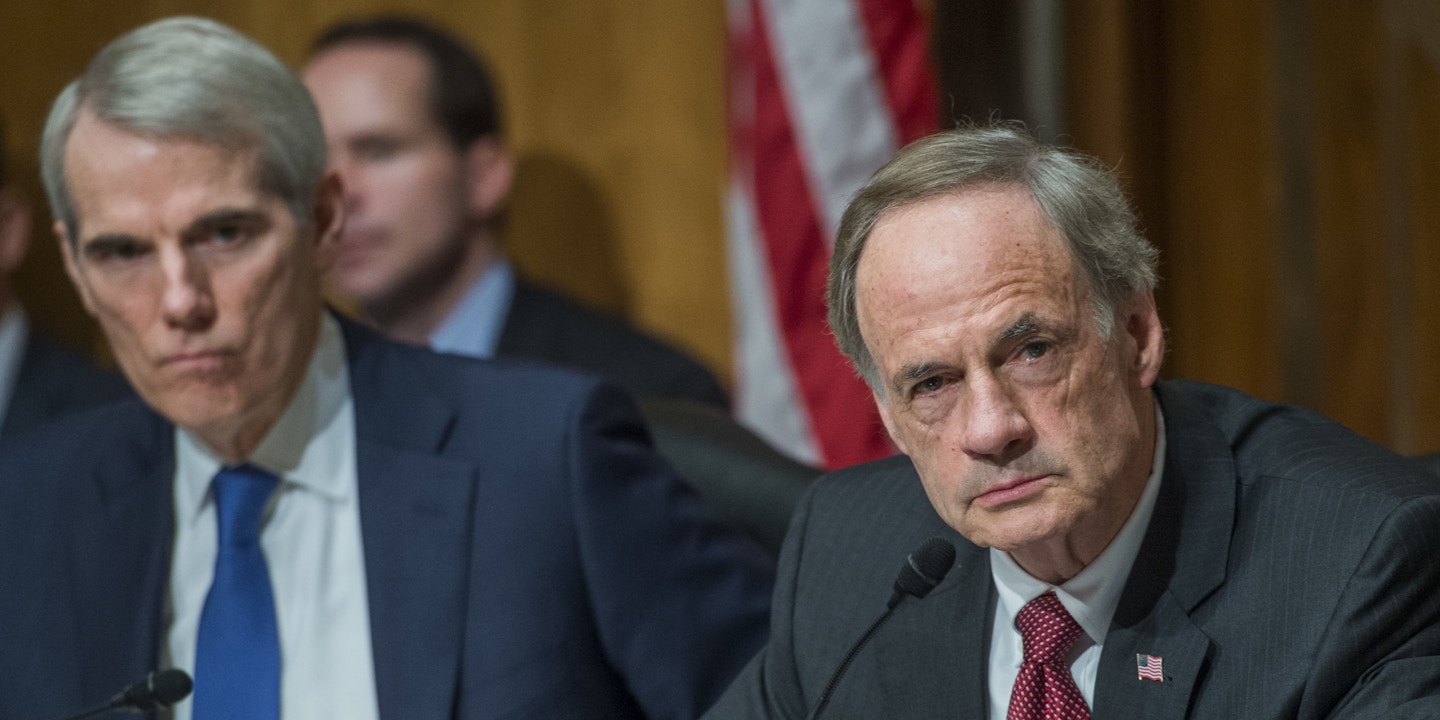 Delaware Sen. Tom Carper portrayed himself as a health care populist at the Democratic primary debate this week, championing his role in writing and defending the Affordable Care Act and declaring, “We oughta re-import drugs from Canada.”

The policy announcement came as the senior senator has sought to recast himself before the September 6 primary. The Carper campaign television advertisement currently blanketing the state proclaims that he “fights back” against Republican threats to the Affordable Care Act.

Carper, who has served for 41 years in elected office in Delaware, is facing a progressive challenge from Kerri Evelyn Harris, a community activist and Air Force veteran vying to be the state’s Democratic candidate for U.S. Senate.

But the Delaware senator’s new approach might be puzzling for some observers. Carper has generally adopted a moderate, business-friendly approach to health care. Indeed, for voters or corporate executives listening closely, there was an extra element of his answer on re-importing drugs that heavily undercuts it. “Some people think we oughta re-import drugs from Canada. I’m all for doing that as soon as soon as the Department of Health and Human Services can guarantee that those medicines are OK to take,” he said. The question of the safety of drugs brought in from Canada has long been the industry’s go-to talking point when objecting to the measure.

The senator, meanwhile, has long voted against the very plan he touted at the debate.

As recently as last year, Carper voted against an amendment offered by Sen. Bernie Sanders, I-Vt., to allow Federal Drug Administration-approved drugs to be imported from countries such as Canada.

In fact, records show that Carper voted against legislation allowing the import of FDA-approved pharmaceuticals from select foreign countries in 2017, 2012, 2011, and twice in 2009.

Asked about the record, a spokesperson for Carper’s office pointed to a 2007 vote on an amendment offered by then-Sen. Byron Dorgan, D-N.D., allowing drug importation.

Carper indeed voted for the measure. But he also voted for what critics called a “poison pill” added days later to the Dorgan amendment to require Department of Health and Human Services to certify any program, a change sought by the drug industry to neutralize the drug importation proposal.

When Dorgan offered a bill two years later to give Medicare more flexibility to import FDA-approved drugs, Carper voted no. The spokesperson for Carper’s office did not respond to The Intercept when asked to clarify the senator’s position.

The Carper spokesperson also offered a statement in defense of the senator’s record:

Senator Carper puts the health and well-being of patients in Delaware first — from fighting to protect those living with pre-existing conditions and ensuring that patients can afford the medications, health care, and medical devices they need, to making sure patients can have confidence in the safety and effectiveness of those medications. As Governor, and now as a Senator, he has worked tirelessly to expand prescription drug coverage and lower costs for seniors. He has long advocated for full access to all forms of birth control. He has supported allowing the federal government to negotiate directly with pharmaceutical companies to lower drug prices for Medicare beneficiaries and has voted to allow drug importation when it can be verified that those drugs are safe for American patients. He is also leading the charge in Congress to keep deadly opioids coming into our country from China off of our streets and is working to ensure that those suffering from addiction can get the treatments they need more quickly and efficiently. Senator Carper’s record reflects his laser focus on delivering real, positive results for patients and their families in the First State.

The pharmaceutical industry has been a close ally to Carper over the years.

During the debate over the Affordable Care Act, Carper made headlines by siding with Republicans to defeat a measure offered by Sen. Bill Nelson, D-Fla., to close the so-called Medicare doughnut hole, ensuring more than $100 billion of savings over 10 years would be passed to seniors. He has voted against truth-in-advertising legislation for drug companies. As governor, Carper put together $41 million in taxpayer subsidies and tax credits, along with $70 million in road and other improvements, for AstraZeneca to relocate its headquarters to Delaware.

The support has translated into hefty campaign dollars and support for Carper’s political network. AstraZeneca is not only one of Carper’s largest lifetime political contributors. The firm also hired Carper’s former chief of staff, Jonathan Jones, as a lobbyist to defeat drug importation proposals.

Merck, Sunovion Pharmaceuticals, Sanofi US, and the American Health Care Association have each given the maximum corporate PAC contribution to Carper’s campaign this year.

But the cozy ties between drugmakers and Carper have angered some in the Democratic base.

“For their money, Big Pharma bought a senator who voted against drug importation, voted against closing the Medicare doughnut hole, and voted against speeding generics to the marketplace. And voted against many of you,” said Steve Tanzer, a blogger with Delaware Liberal, a watchdog website.

Harris, Carper’s opponent, has slammed the senator’s relationship with the drug lobby, calling for a “Medicare for All” system that uses its bargaining power to lower drug prices and provide health care as a human right. She says she supports drug re-importation.

Carper has also been a longtime foe of the effort to legalize medical marijuana, but recently reversed course.