Anonymous White House officials are demonstrating that the decadent rot in U.S. society goes a thousand times deeper than Trump himself. The first reviews of “Fear,” Bob Woodward’s new book about Donald Trump’s presidency, came out Tuesday. Woodward, they reported, depicts Trump as a dangerous 5-year-old who must be constantly manipulated by his staff to stop him from setting America on fire. Then, on Wednesday, in a New York Times op-ed, an anonymous administration official said: Yes, that’s exactly right.

This, as the Washington Post describes it, must be one of the most startling stories in “Fear”:

After Syrian President Bashar al-Assad launched a chemical attack on civilians in April 2017, Trump called [Defense Secretary James] Mattis and said he wanted to assassinate the dictator. “Let’s fucking kill him! Let’s go in. Let’s kill the fucking lot of them,” Trump said, according to Woodward.

Mattis told the president that he would get right on it. But after hanging up the phone, he told a senior aide: “We’re not going to do any of that. We’re going to be much more measured.” The national security team developed options for the more conventional airstrike that Trump ultimately ordered.

One potential reaction to this is: Oh my god, Trump truly does want to launch Armageddon, and we’re all forever in debt to the non-lunatics in the administration that are trying to restrain him.

Another potential reaction is: It’s unbelievably bad for America when government officials for whom no one voted secretly defy the guy who actually was elected.

Both reactions are legitimate and understandable, and there’s no reason to choose between them. But we should feel an additional, even more profound fear: The official resistance, by turns inept and unwilling, to Trump’s administration demonstrates a political rot that goes way deeper than the president. It extends to all the bureaucrats and politicians who have failed so far in their bids to oppose the president’s worst instincts and policies, and to perhaps to most Americans. The imperial presidency is running amok, and nothing about our country’s politics appears able to do anything about it.

Let’s consider, for example, that Mattis’s actions on Syria should have sparked a third reaction, too: Wait, why did this matter at all? I thought Congress was in charge of declaring war.

Because, of course, what Mattis didn’t do was hand Trump a copy of the Constitution and point to the part of Article I, Section 8 that says “The Congress shall have Power … To declare War.” Instead, Mattis happily executed a smaller-scale bombing of Syria with no authorization from Congress.

How could Mattis, and the Trump administration generally, claim this was constitutional? It was easy: Some lawyers at the Justice Department wrote a memo saying it was, and then didn’t allow anyone outside of the executive branch, including members of Congress, to read it. They then used the same tactic for a second bombing of Syria last April. (The memo providing the legal justification for this year’s strike was eventually released in the face of a lawsuit.)

But of course, Trump is only the latest president to claim war powers that are unconstitutional on their face. Since World War II, the executive branch has encroached further and further on the prerogatives of the legislative branch, with only scattered, ineffective resistance from Congress. 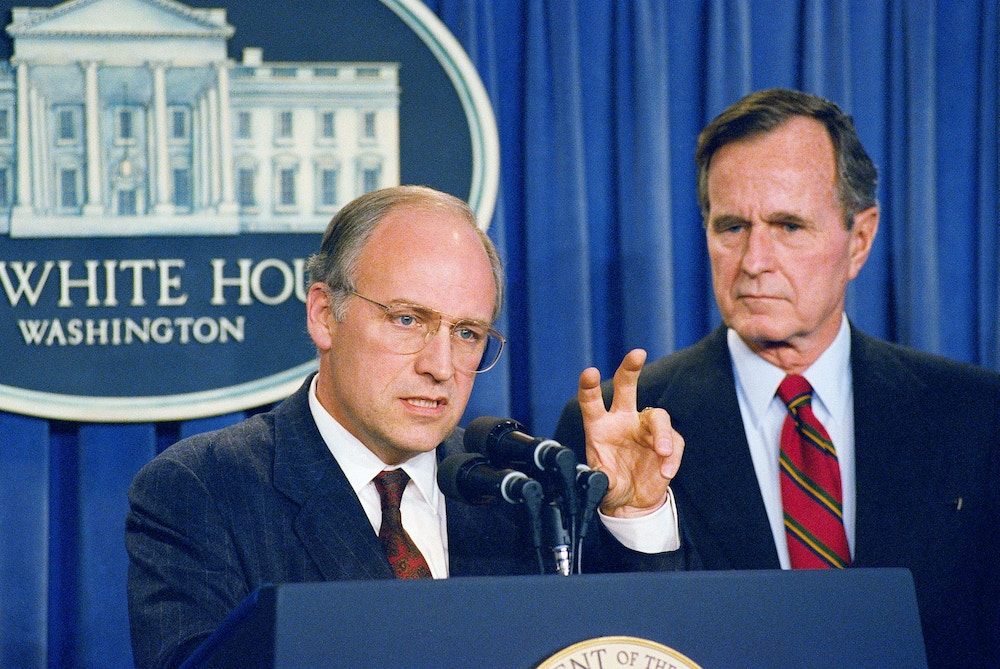 Rep. Dick Cheney, R-Wyo., President George H.W. Bush’s choice to become Defense Secretary, meets with reporters after the president made the announcement on March 10, 1989, at the White House.

This didn’t happen by accident. The expansion of presidential power regarding foreign policy in particular — but also with all issues — has been a long-standing project on the right. When Dick Cheney was secretary of defense during the George H.W. Bush administration, he claimed that Bush could prosecute the first Gulf War in 1991 without any congressional approval. Then, after 9/11, Cheney’s minions wrote a legal treatise arguing that the younger Bush didn’t need Congress’s approval if he wanted to invade a country like, for instance, Iraq. The GOP has decided that the president should be something close to an elected king, and Democrats have largely gone along.

As Woodward’s book and the anonymous New York Times op-ed demonstrate, we’re now reaping the fruits of this decades-long degradation of U.S. politics.

An imperial presidency that wields centralized power will inevitably turn regular people into passive observers, vulnerable to a charlatan who tells them, I alone can fix all of your problems. A system based on one person’s whims will soon attract those happy to substitute whims of their own. Legislators meant to jointly wield diffuse power will forget how or why they should want to. And essentially no one wants to live the consequences of Abraham Lincoln’s prescription: “Elections belong to the people. It’s their decision. If they decide to turn their back on the fire and burn their behinds, then they will just have to sit on their blisters.”

Any Romans who lived through the decline and fall of their empire would immediately recognize this phenomenon. Republican Rome had a concept of corruption that was broader than just exchanging money for political favors. Rather, political elites and entire societies could be corrupted by a failure of character, a refusal to engage in the basic sacrifices needed for self-government. Livy, a Roman historian born in the 1st century B.C.E., famously put it like this:

Rome was originally, when it was poor and small, a unique example of austere virtue; then it corrupted, it spoiled, it rotted itself by all the vices; so, little by little, we have been brought into the present condition in which we are able neither to tolerate the evils from which we suffer, nor the remedies we need to cure them.

That was 2,000 years ago, and also exactly where we are now. The secret Trump #Resistance cannot tolerate the evils of what Trump would do unleashed. But they also do not have the civic courage to use the remedies — impeachment, the 25th Amendment, or simply resigning and telling the world what they know — needed to cure them.

All of this is extremely ominous for the future of politics in America. Simplicity, openness, clear lines of authority — these are norms in a society that is capable of changing for the better. Secrecy, conspiracy, endless, shadowy struggles for power with no rules — these are characteristics of people in an inescapable, decadent tailspin. The past week makes clear which kind of country America is.

Top photo: U.S. President Donald Trump listens to a question as he meets with the emir of Kuwait, Jaber Al-Ahmad Al-Sabah, in the Oval Office of the White House on Sept. 5, 2018, in Washington, D.C.