Three years ago, Noura Ghazi’s husband died in Assad’s prisons. The government only gave notice of his death this year. 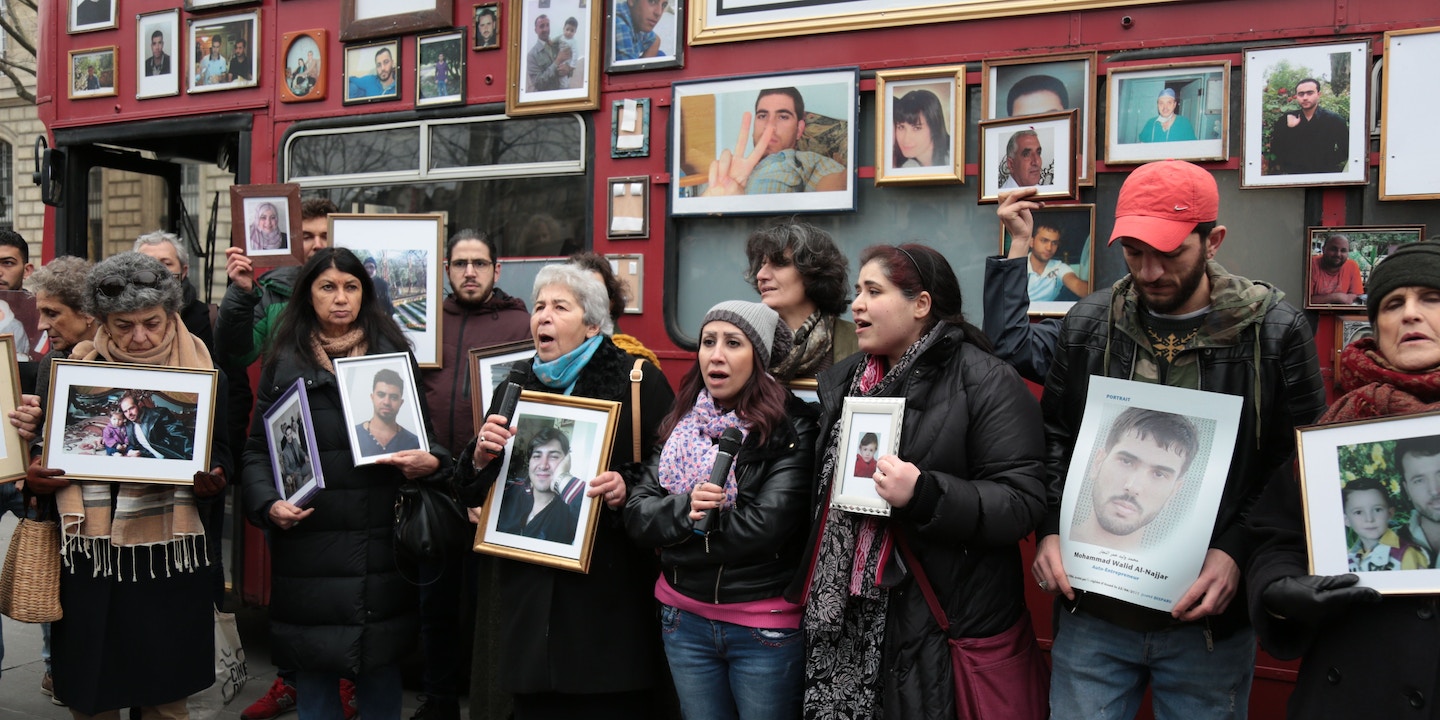 Two weeks before they were set to be married, Noura Ghazi’s fiancé disappeared the first time.

Bassel Khartabil, a Syrian-Palestinian software designer and peaceful activist, had been picked up by Syrian authorities in the al-Mezzeh district of Damascus. The arrest had come on March 15, 2012, exactly a year after Syrians began to rise up against the government of Bashar al-Assad. It would be months before Khartabil resurfaced: Ghazi finally received a short letter from him explaining that he was being held at a military detention facility. He had been charged with spying for an unspecified foreign state.

A few more months passed before Ghazi was able to see Khartabil. The couple had several brief visits in custody. During one of the face-to-face meetings, in early 2013, they got married. The occasional visits continued until October 2015, when Bassel once again disappeared.

Ghazi sought information from the government, but the authorities offered no explanation of her husband’s whereabouts. “I spent two years without any information about him at all,” she said. She continued to search for two years until, in 2017, Ghazi found out from contacts in the government that, not long after she last saw him, Khartabil had been transferred to another detention facility. There, shortly after he was moved, Khartabil was executed.

“They gave him a certificate that showed Bassel’s date of death in October 2015. It was just two days after he had disappeared.”

The Syrian government remained officially mum: Though her contacts had given Ghazi the information about Khartabil’s death, authorities gave no formal confirmation. This year, however, Khartabil’s bereaved father went to a government registry office to check for information on his son. “They gave him a certificate that showed Bassel’s date of death in October 2015,” Ghazi said. “It was just two days after he had disappeared.”

Syria is rife with stories of families whose loved ones disappeared over the years of a brutal civil war, yet only recently learned their ultimate fates inside the government’s byzantine and shrouded detention system. Among those recently confirmed dead are Islam Dabbas, a student activist from the Damascus suburb of Darayya who was arrested on July 2011, just months into Syria’s uprising. Dabbas’s family found out this year that their son died in a government prison in January 2013 — a fact that only emerged when relatives received a copy of a family registry that indicated he was deceased. Another recent notice confirmed the death of Lama Nawaf Al Basha, a college student at Damascus University who was arrested by government security forces in November 2014. Her family learned of her death this July when they, too, saw their updated family registry. Bassel, Dabbas, and Al Basha were just a few of the tens of thousands of Syrians who are believed to have disappeared into government prisons over the past seven years of conflict. For most families of these detainees, the fates of their relatives remained a mystery. But over the past several months, as the Syrian government’s victory in the conflict has become more certain, the government began quietly updating its records and issuing notifications confirming what many Syrians most feared: that their loved ones died while in government custody.

“It is egregious that the Assad regime has sat on the news of these detainees’ deaths for so long without notifying their families.”

“It is egregious that the Assad regime has sat on the news of these detainees’ deaths for so long without notifying their families,” said Mai El-Sadany, legal and judicial director for the Tahrir Institute for Middle East Policy. “People are being denied even the mourning process and a chance to bury their loved ones. It’s a reflection of how this regime views the lives of its citizens — even peaceful dissidents — as essentially worthless.”

The recent revelations underscore an already well-known pattern of atrocities in Syria since 2011, when an uprising began as part of the so-called Arab Spring. Along with evidence of aerial attacks on civilian targets, chemical weapons attacks, and the systematic use of torture, the Syrian government has been accused of carrying out an extermination program in its prisons. Though widely discussed, public evidence of the grievous rights abuses in prison began to mount in 2014 after a government defector leaked tens of thousands of photos showing evident deaths in government custody.

According to numbers compiled by the Syrian Network for Human Rights, there are at a minimum 95,000 forcibly disappeared persons in Syria, with almost 82,000 of these people having disappeared into the sprawling prison network maintained by the Assad government. Several groups have been documenting deaths in detention since the start of the uprising in Syria in 2011.

Human rights groups focused on Syrian detainees said that a recent wave of new death notifications corresponds with records updates that families were made aware of this May. The Violations Documentation Center has counted nearly 9,500 deaths in detention since 2011, about several hundreds of which were made known in this records update. The Syrian Network for Human Rights itself has counted over 13,000 such deaths over the same period, confirming 836 cases of deaths in detention from the records update this year. (The Violations Documentation Center acknowledges that its estimates are more conservative than other organizations like the Syrian Network for Human Rights, as its methodology is to document deaths only once information like the name of the victims and the circumstances surrounding their deaths are confirmed.)

Dozens of reports from families of death notices have continued to roll in, and the human rights groups expect the number of documented deaths in custody to rise in the coming weeks and months. An aerial view of Sednaya Prison, outside Damascus, Syria.

With families finding out through unusual means about the deaths of their loved ones, suspicions around the deaths in government custody are running high. In some cases, government officials delivered death certificates to the families, while others found out after asking for a family registry document from their local civil registration office. Frequently, no cause of death is listed on the certificates, or it is listed as a health issue such as “heart attack,” “stroke,” or other unspecified natural cause. So far, none of the families — accounting for some hundreds confirmed dead — have reported that they received the remains of their loved ones.

Activists said that these explanations are thinly concealed attempts at denying the widespread torture and executions of detainees being carried out in government prisons.

“If a certificate says ‘heart attack’ as the cause of death, and then does not give you a body back, that raises a lot of question marks.”

“There are certain procedures you have to go through in order to officially register a death in Syria,” said Mona Zeineddine, director of communications at the Violations Documentation Center. “You would never just say ‘died’ on the death certificate without undergoing these procedures. If a certificate says ‘heart attack’ as the cause of death, and then does not give you a body back, that raises a lot of question marks.”

Two more of those recently reported dead were Yahya and Maan Shurbaji. Yahya was a member of the activist group Darayya Youth and was well-known for being a committed pacifist who advocated peaceful change within the country, the growth of local democracy, and the protection of minority groups. He disappeared into regime custody after being arrested in 2011. This year, his family learned that Yahya had died in early 2013, while being held at the notorious Sednaya Military Prison north of Damascus.

Researchers at the Violations Documentation Center said most of the victims who have been named in the recent records updates by the government are from towns and cities that were particularly active in the early years of the uprising. Like Bassel Khartabil and Yahya Shurbaji, they were arrested between 2011 and 2012 and came from towns and cities like Darayya, Hama, and Moadamiyeh — major centers of the civil uprising against the government. Noor Elkhateb, researcher at the Syrian Network for Human rights, said the dates of deaths range from 2013 and 2016.

Although the final phases of the Syrian war are still playing out, a military victory by the Assad government and its backers now seems assured. Unlike some other post-conflict countries, however, there is little indication that the government intends to engage in an accountability process that could help mend the fabric of Syrian society. The absence of basic accountability, let alone a truth and reconciliation process for the massive human rights abuses of the past seven years, could doom Syria to an even worse long-term future and a new cycle of conflict.

“This is a regime that has killed hundreds of thousands of people and is now issuing death certificates claiming that its detainees died of heart attacks or other natural causes. It’s a message that they know they won’t face accountability, they don’t care, and this is just a reality that Syrians will have to accept,” said the Tahrir Institute’s El-Sadany. “This is not a blueprint for a peaceful or stable country. This is regime that is coming back with a stronger and more brutal authoritarianism than ever before.”

Top photo: Noura Ghazi, center, and activists hold portraits of those detained or missing in front of a “Freedom Bus” after it was driven onto the Place de la Republique in Paris on Jan. 27, 2018, during a demonstration organized by “Families for Freedom” to demand freedom for those detained in Syria.