An estimated 1,800 civilians were killed in the U.S.-led campaign to push ISIS from Raqqa. A new report documents the destruction. 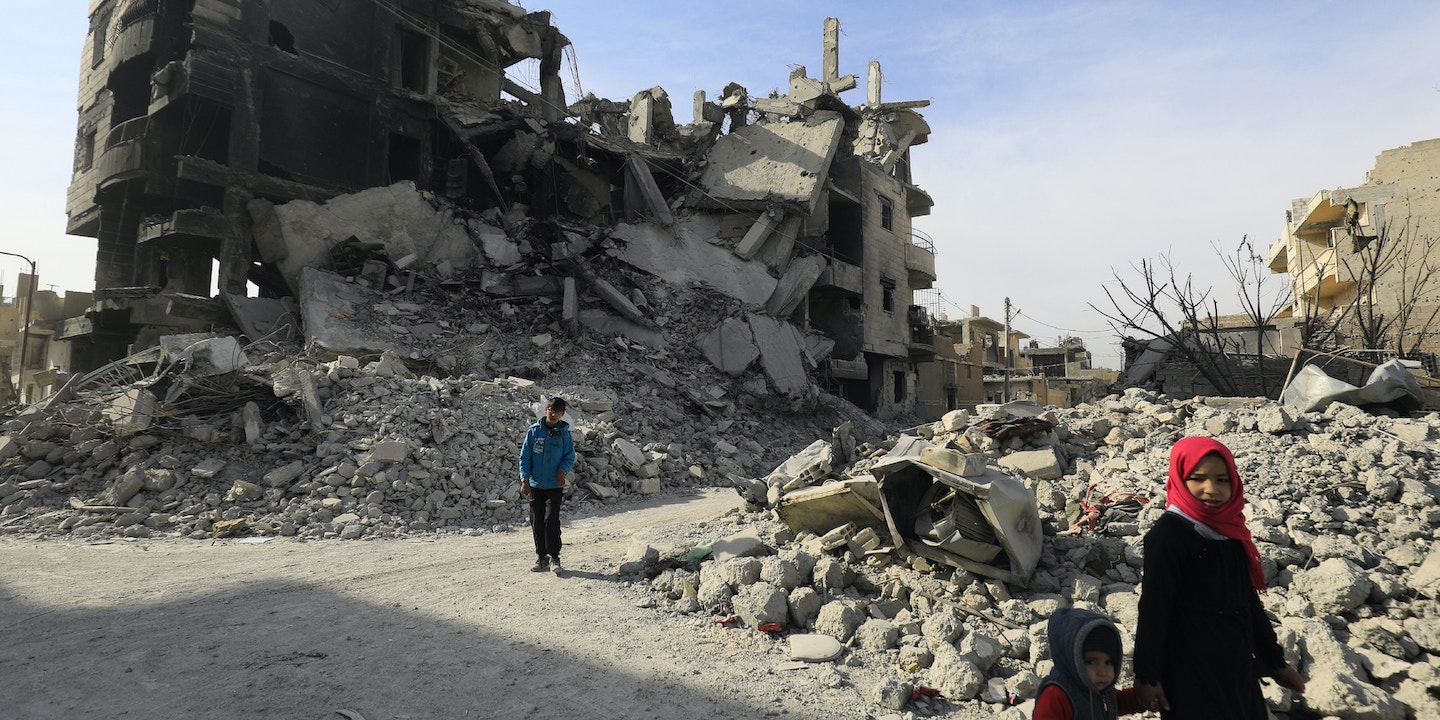 As the battle for Raqqa, Syria, raged last October, a family in the Harat al-Badu neighborhood bunkered down in their home in an attempt to survive the fighting between the U.S.-led coalition and Islamic State militants. Mohammed Fayad, a man in his 80s, had lived in the same home in Harat al-Badu for the past 50 years. When the fighting began, Fayad refused to flee the property that he had put a lifetime of labor into, remaining in the home with his daughters and other relatives. As coalition airstrikes began pounding the city, Fayad’s home also became a refuge for other terrified neighbors and their families seeking safety from the attacks.

Their safe haven would not last. On the night of October 11, a coalition airstrike hit Fayad’s home. As Ali Habib, a local man who had been sheltering his family with Fayad, later told researchers from Amnesty International:

I was sitting on a chair holding my little boy and the women were sitting on the floor, huddled together. … I felt the roof of the house collapse on me. I could not move and my little boy was not next to me anymore. … I called my wife, my mother, my daughter, but nobody answered. … I realized that everybody was dead. Then my boy, Mohammed, called out and that gave me the strength to free myself from the rubble and go to him. He had been thrown some 10 meters away by the explosion. We were both injured. From top, Mohammed Fayad and his daughters Wafa’, Fadda, and Tamam; Ammar al-Faris; Reem al-Maddad, Yusra Abd-al-Aziz, and baby Razqiya Habib; Jasim Hamal and Salem Hamad. They were among the 16 civilians killed in coalition airstrikes on Oct. 12, 2017, in Raqqa, Syria.

Sixteen people were killed in the strike that hit Fayad’s home, including Fayad, his three daughters, and 11 other relatives and acquaintances.

Fayad’s story is one of many contained in a new report by Amnesty International, an appraisal of the coalition’s four-month anti-ISIS campaign and its impact on civilians living in the city. The report, titled “War of Annihilation,” builds on earlier work by Amnesty International and others that has found that U.S.-led airstrikes have caused massive civilian casualties, and it asks whether the destruction was necessary in order to defeat the Islamic State.

For this latest report, researchers spent two weeks visiting more than 40 locations where coalition strikes took place and interviewing over 110 witnesses and survivors of these attacks. Based on these findings, the report’s authors write that there exists “prima facie evidence that several Coalition attacks which killed and injured civilians violated international humanitarian law,” adding that “Coalition forces did not take adequate account of civilians present in the city and failed to take the precautions necessary to minimize harm to civilians and civilian objects.”

The exact number of civilians who died in coalition strikes on Raqqa last year remains unknown. The independent monitoring group Airwars has estimated that the death toll was at least 1,800, though the true figure may be considerably higher. During the height of the fighting last August, the United Nations issued a statement criticizing the coalition for the “unacceptable price” that its attacks were inflicting on civilians in the city. A U.N. humanitarian mission that traveled to the city this April said they were “shocked by the level of destruction, which exceeded anything they had ever seen before.” 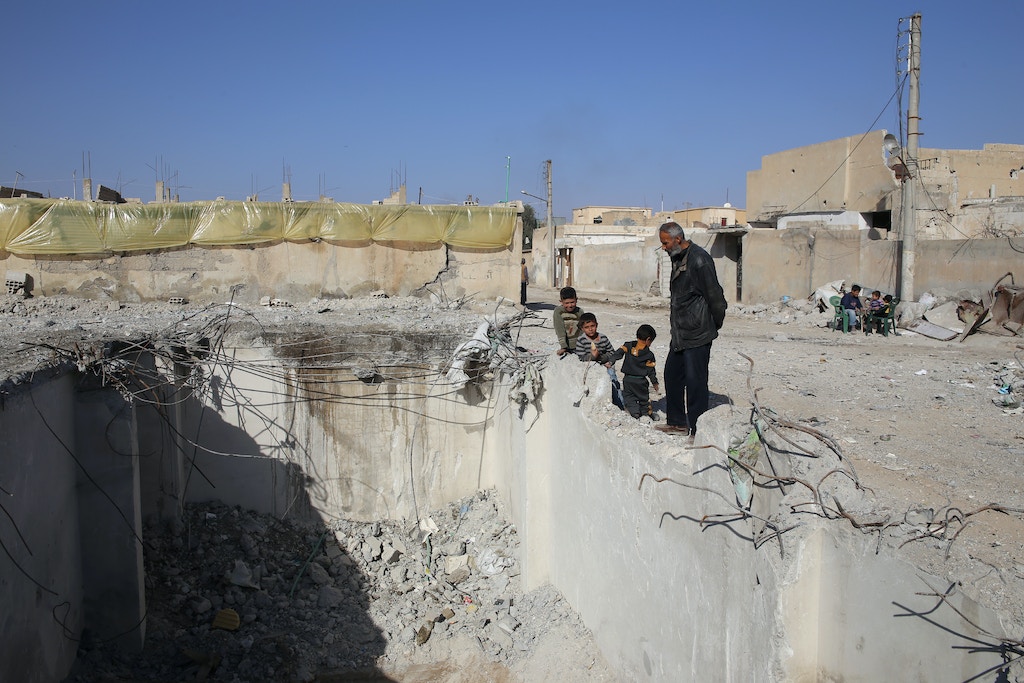 Mohammed Aswad looks down into the basement of his family’s building, where his brother and seven other civilians were killed in a coalition strike on June 28, 2017. The building was completely destroyed.

The Amnesty International report documents numerous cases in which entire families were wiped out by coalition air and artillery strikes that hit residential areas of the city. While thousands fled the city during ISIS rule, and many more in advance of the coalition offensive, thousands also remained to protect their homes and property from looting by militants. These individuals found themselves caught in the crossfire between the coalition, its allied ground forces, and ISIS fighters seeking to use residents as human shields.

One airstrike documented in the report took place last June, in the working-class Jezra intersection area of western Raqqa. That strike killed eight members of the Othman Aswad family, including five children between the ages of 8 and 17. The family had been sheltering in a cellar on their property and were killed when a coalition attack leveled the building.

The battle to liberate Raqqa from the Islamic State resulted in the near-total destruction of the city, with an estimated 11,000 buildings destroyed or damaged during the fighting. The U.S. military admitted to the use of “annihilation tactics” during the campaign, and Defense Secretary James Mattis rationalized civilian casualties as a “fact of life.” But for many, the most galling aspect of the battle for Raqqa was that, after many months of fighting, the coalition ultimately allowed safe passage for ISIS fighters to leave the city. This negotiated withdrawal raised serious questions about whether the campaign needed to be waged as brutally as it was.

“Many people in Raqqa are asking why the coalition deemed it necessary to kill so many civilians and destroy the entire city, only to ultimately let the ISIS fighters it was targeting leave,” said Donatella Rovera, a researcher for Amnesty International who conducted field interviews in the city. “If the coalition had deemed it necessary to take certain risks that would lead to them killing civilians, but deemed those necessary risks to target ISIS fighters, why, in the end, did they decide to let the ISIS fighters withdraw from the city with impunity, taking their weapons along with them?” A picture taken on Sept. 5, 2017, shows smoke billowing out following a coalition airstrike in the western al-Daraiya neighborhood of Raqqa.

A statement announcing the withdrawal last October attempted to distance the coalition from the agreement, attributing it to the efforts of local tribal leaders seeking to reduce civilian casualties.

“Many people in Raqqa are asking why the coalition deemed it necessary to kill so many civilians and destroy the entire city, only to ultimately let the ISIS fighters it was targeting leave.”

Rovera says the level of destruction in the city, coupled with the unwillingness of the coalition to carry out serious investigations of its strikes — including site visits and interviews of the types that independent researchers have conducted — casts doubt on U.S. claims that they take pains to minimize civilian casualties during their operations. The concerns are not limited to Raqqa. U.S. authorities have justified airstrikes in other parts of Syria and Iraq that were alleged to have caused widespread civilian casualties, but in each case, there’s no evidence that the military actually interviewed witnesses and survivors.

“Because the coalition is unwilling to share details of operations and are also unwilling to conduct investigations in a serious manner, it’s impossible to evaluate what decisions caused this massive loss of civilian life and whether it was proportionate,” said Rovera.

“U.S. military officials travel in and around Raqqa, and they meet with local officials regularly,” she added. “There is nothing preventing them from carrying out on-the-ground site visits at places where their strikes took place and interviewing witnesses and survivors. That’s absolutely crucial and that’s what we’d like to see them to do.”

Top photo: Syrians walk amid the debris of destroyed buildings in Raqqa on Jan. 11, 2018, after a huge military operation, led on the ground by Kurdish fighters and in the air by U.S. warplanes, defeated jihadis from the Islamic State group but also left the city completely disfigured.