AFRICOM planning documents offer a nightmare vision of north and west Africa falling under the control of terror groups working together. 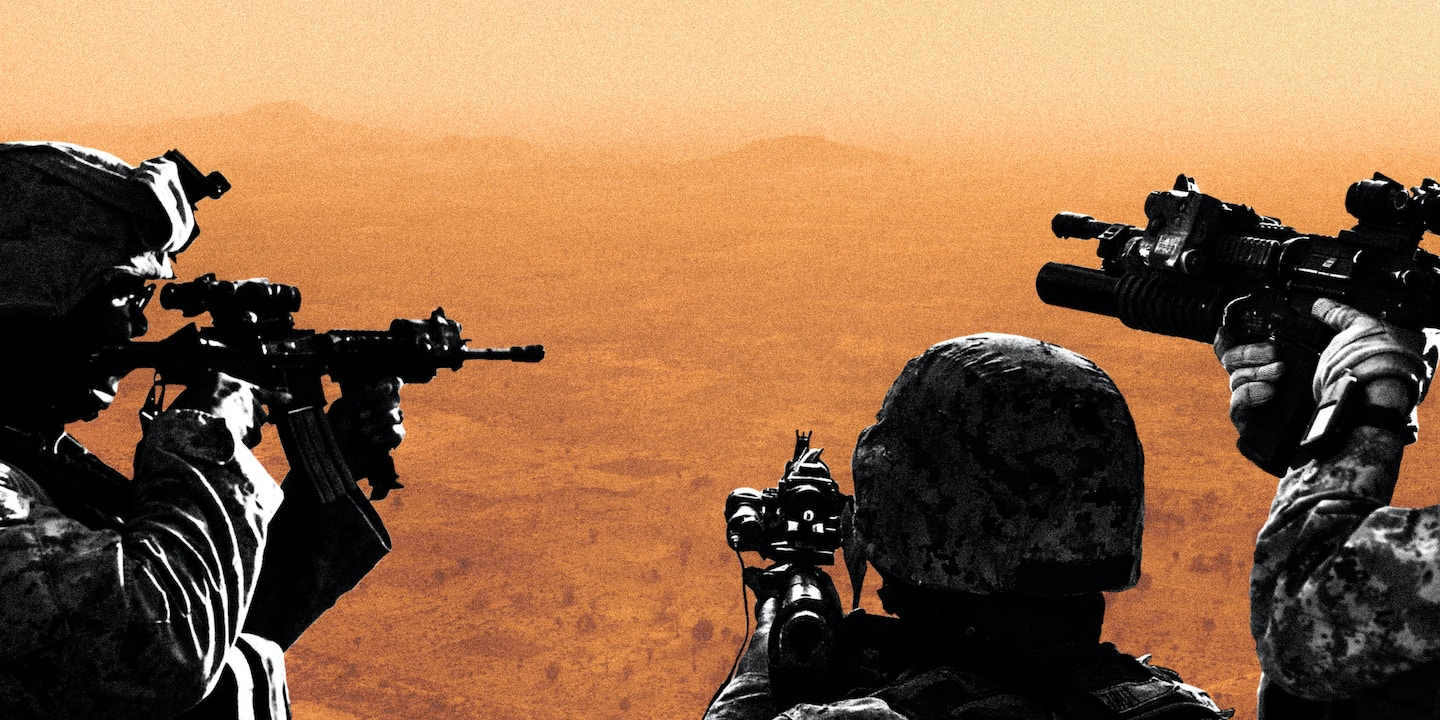 What keeps U.S. Africa Command chief Gen. Thomas Waldhauser up at night? That remains unknown, but the analysts under his command are worried about terrorist organizations like the Islamic State, Al Qaeda, and Boko Haram combining forces and destabilizing large swaths of the African continent.

Planning documents issued in October 2017 and classified by Waldhauser detail the worst-case scenarios imagined by the command. The forecasts, which are an update to AFRICOM’s Theater Campaign Plan and were obtained by The Intercept via a Freedom of Information Act request, center around potential gains by terrorist organizations in the north and west of the continent, specifically Libya, the Sahel, and the Lake Chad basin. They offer a nightmare vision of a destabilized, crisis-ridden region that could – if the worst happens — fall increasingly under the control of Al Qaeda, ISIS, and Boko Haram.

North and West Africa have seen intense U.S. military engagement over the last decade. America has, as The Intercept reported earlier this year, conducted approximately 550 drone strikes in Libya since 2011 — more than in Somalia, Yemen, or Pakistan. In July, Politico disclosed that for at least five years, Green Berets, Navy SEALs, and other commandos — operating under a little-understood budgetary authority known as Section 127e — have been involved in reconnaissance and “direct action” combat raids with local forces in Cameroon, Libya, Mali, Mauritania, Niger, and Tunisia. Between 2015 and 2017, there were also at least 10 previously unreported attacks on American troops in West Africa, the New York Times revealed in March. Last October, four U.S. troops were killed in an ISIS ambush in Niger. Two months later, Green Berets fighting alongside local forces in that same country reportedly killed 11 ISIS militants.

The disclosure comes as Waldhauser has submitted a proposal, in response to the Trump administration’s strategy to increasingly focus on threats from China and Russia, to drastically cut the number of U.S. commandos on the continent and shutter several bases, according to a recent report by the New York Times. AFRICOM did not respond to requests to interview Waldhauser.

The AFRICOM documents imagine a future in which the Islamic State consolidates control over eastern Libya – a region destabilized by a 2011 NATO military intervention that overthrew autocrat Muammar Gaddafi. ISIS, in this scenario, would dominate major cities and develop close ties with local militias and “tribal elements.” According to the files, ISIS could then use oil revenues to finance a wide-ranging terror campaign. “ISIS and their associated branches might then begin to plan and conduct large scale, high-impact attacks against Western targets in North Africa and Europe,” according to the files.

Experts say that the scenarios are generally plausible, but lack sophistication. There is little evidence to suggest that much time or effort was expended in scripting the nightmare forecasts. Key aspects — like probable safeguards that would likely keep such dire projections from coming to pass — go unmentioned. One former U.S. intelligence analyst, who asked not to be named for fear of jeopardizing relationships with current officials, described a scenario involving Boko Haram and ISIS-West Africa as “ludicrous” due to its utter improbability. Additional checks on militants, like vigilante groups and local self-defense forces, would, he said, almost certainly prevent that worst-case scenario from coming to pass.

AFRICOM’s worries include a potential alliance between ISIS and Ansar al-Sharia-Benghazi, or ASB, whose members reportedly took part in the deadly assault on the U.S. consulate in Benghazi, Libya, in September 2012. Such a merger, the command warns, would provide the Islamic State with sophisticated supply networks and a large contingent of experienced, well-armed fighters. The combination of ASB’s local power and ISIS’s “aggressive tactics” could allow the group to expel the Libyan National Army, led by Gen. Khalifa Haftar, from Benghazi.

Just to the south, in the countries of the Sahel region, AFRICOM’s nightmare scenario involves the union of ISIS and Al Qaeda in the Islamic Maghreb, or AQIM, rival terror groups that have previously competed with each other. The plans express a fear that “AQIM and ISIS operatives team up to plot attacks against U.S., Western, and local authorities in a bid to demonstrate the impact of the merger.” Such a wave of violence, the documents warn, would allow the hybrid terrorist organization to make inroads in Algeria, Mali, and Tunisia, “unifying extremists across the region.” This, in turn, would allow for the ability to launch large-scale assaults on United Nations peacekeepers as well as kidnapping and “assassination operations” against Westerners in the region.

“Within five years, the groups will reestablish control over Northern Malian territory as far south as Timbuktu and will maintain close and cooperative relations with Malian rebel groups as they provide effective governance over captured territory,” according to AFRICOM’s worst-case projection. 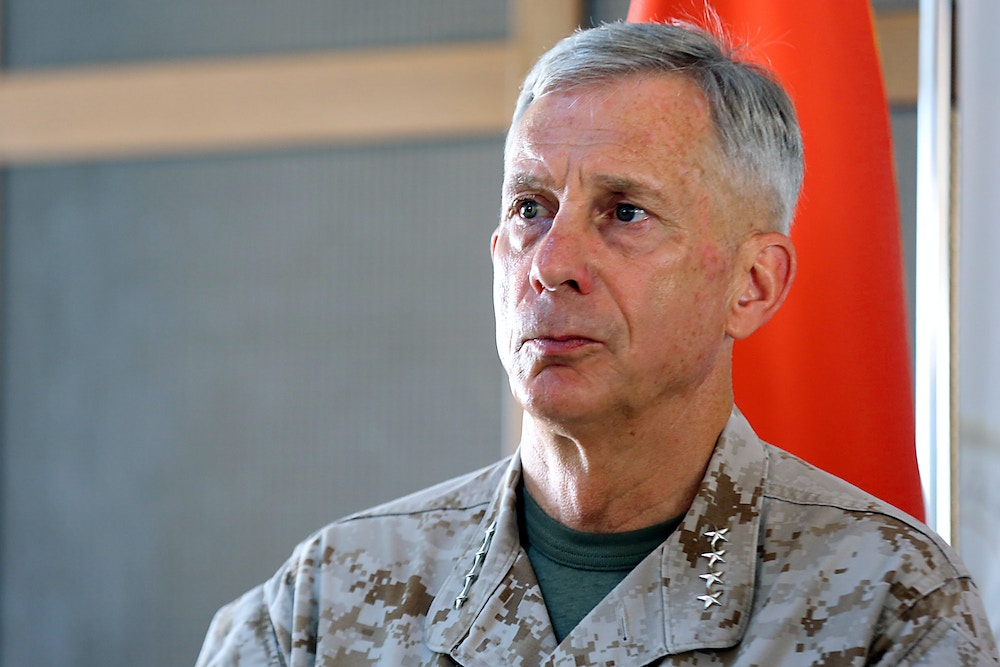 Commander of U.S. forces in Africa Gen. Tom Waldhauser attends a press conference after a security meeting with the National Reconciliation Government in the Libyan capital, Tripoli, on May 31, 2018.

Under the terms of Waldhauser’s reported proposal to slash the number of U.S. commandos operating in Africa by 25 percent over 18 months, and by 50 percent over three years, troop cuts would fall heavily on Central and West Africa, beginning with countries like Cameroon and Niger. This region is precisely where AFRICOM, in its 2017 planning documents, envisioned what appears to be its most dire scenario.

If regional counterterrorism efforts fail and Boko Haram and ISIS-West Africa receive sufficient funding, AFRICOM warned, the groups would begin exerting territorial dominion over much of northeastern Nigeria and the Lake Chad Basin — including de facto control over portions of Cameroon and Niger. “Within two years, BH and ISIS-WA could become a destination of destructive global jihad, receiving regional and global foreign fighters for training and indoctrination,” the planning documents cautioned.

AFRICOM did not respond to questions from The Intercept regarding the proposed plans to withdraw seven of the the eight elite counterterrorism units operating in Africa and close military outposts in Tunisia, Cameroon, Libya, and Kenya, nor how that might affect U.S. military efforts with respect to the command’s worst-case scenarios. But the number of terrorist groups and terror attacks have risen alongside increasing deployments to U.S. commandos. In the wake of the deadly 2017 attack in Niger, one expert told The Intercept that the “larger U.S. military presence has, at a minimum, served as a recruiting tool for the growing number of terrorist groups operating in West Africa.”

“No decision has been officially made regarding U.S. counterterrorism forces operating in Africa,” Maj. Sheryll Klinkel said by email. “The optimization effort does not mean that we are going to walk away from counterterrorism but that efforts must be ‘right-sized’ to align with current security priorities outlined in the National Security Strategy and National Defense Strategy.”

Even if AFRICOM’s nightmare scenarios don’t come to pass, the command sees ample trouble on the horizon. “Over the next five years, Africa will remain ripe for political instability, conflict, and other events that will require humanitarian assistance,” the documents warn. “The continent of Africa will remain volatile, unpredictable, and characterized by conflict and unrest for the foreseeable future.”

Top image: The main image in this illustration, a photo from February 2018, shows an aerial view of the outskirts of Maroua, Far-North Region, Cameroon, where a conflict between the Nigerian Islamic terrorist group Boko Haram and the Cameroonian army has taken place since 2014.