Federal court employees, under the right circumstances, are willing to speak to the Judiciary Committee about Brett Kavanaugh and Alex Kozinski. 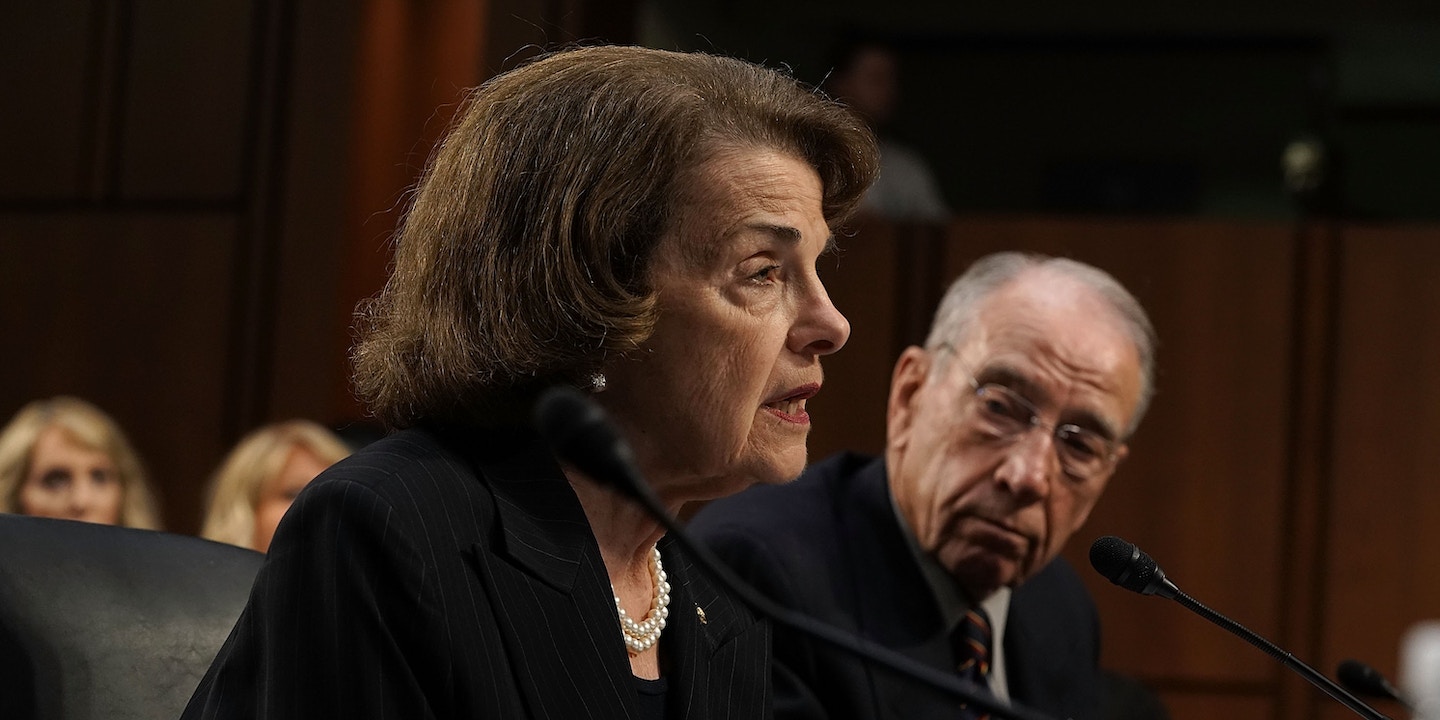 The top Republican and Democrat on the Senate Judiciary Committee were both approached in July by an attorney claiming to have information relevant to the confirmation of Brett Kavanaugh to the Supreme Court. The attorney claimed in his letter that multiple employees of the federal judiciary would be willing to speak to investigators, but received no reply to multiple attempts to make contact, he told The Intercept.

Cyrus Sanai made his first attempt to reach out to Sens. Charles Grassley, R-Iowa, and Dianne Feinstein, D-Calif., in a letter dated July 24.

Sanai told the committee leadership that “there are persons who work for, or who have worked for, the federal judiciary who have important stories to tell about disgraced former Chief Judge Alex Kozinski, and his mentee, current United States Supreme Court nominee Brett Kavanaugh. I know that there are people who wish to speak out but fear retaliation because I have been contacted by more than a half-dozen such persons since Judge Kozinski resigned in disgrace.”

Sanai is the California attorney who blew the whistle on Kozinski years before a series of articles in the Washington Post in December finally brought about the resignation of the former chief judge of the 9th Circuit Court over sexual harassment revelations. Sanai has long challenged the judiciary and was deemed a “vexatious litigant” by one trial court, an attempted designation that was overturned on appeal.

Since Kozinski’s resignation, questions have been raised about what Kavanaugh knew or did about such behavior, given the close relationship between the two. Kavanaugh clerked for Kozinski in the 1990s, a post that led directly to his clerkship with Supreme Court Justice Anthony Kennedy, who recommended Kavanaugh to President Donald Trump as his replacement. Kozinski and Kavanaugh remained close and both vetted prospective clerks for Kennedy.

The Sanai letter was overnighted and emailed to Grassley’s office on July 25, and Sanai provided a copy of the receipt. He dropped the letter off by hand to Feinstein’s office in West Los Angeles, he said, after being told over the phone that was the most efficient route to delivery.

Senator Grassley’s office received correspondence, which was also addressed to Sen. Feinstein, from Mr. Sanai in July. As we always do, the office reviewed the content and claims in the letter to determine how best to assess and use the information. The contents of the letter concerned the actions and behavior of former Judge Alex Kozinski and, to a lesser extent, his relationship with Judge Kavanaugh. This topic was discussed significantly at Judge Kavanaugh’s hearing.

Feinstein did not provided comment by the time of publication.

During his confirmation hearings, Kavanaugh told the Judiciary Committee that he had no knowledge whatsoever of Kozinski’s behavior and was stunned to learn of the misconduct allegations. “When they became public, the first thought I had: No one should be subjected to sexual harassment in the workplace ever, including in the judiciary, especially in the judiciary,” Kavanaugh said under oath during his confirmation hearing, responding to a question from Sen. Orrin Hatch, R-Utah. “When I heard, it was a gut punch. It was a gut punch for me. It was a gut punch for the judiciary. I was shocked, and disappointed, angry, swirl of emotions.”

In a follow up question, Sen. Mazie Hirono, D-Hawaii, asked him to search his records and in a written response, he backed off his certainty, saying only, “I do not remember receiving inappropriate emails of a sexual nature from Judge Kozinski.”

Sanai told The Intercept that at least two federal employees had information to provide the committee about Kavanaugh, including one who spoke directly with Kavanaugh about it. Sanai said that he did not hold Kavanaugh responsible for Kozinski’s behavior, but rather that his claim of ignorance was not credible and could be contradicted by witnesses. Kavanaugh’s credibility has become a central issue in his confirmation, as he has “unequivocally” denied allegations that he sexually assaulted Christine Blasey Ford when both were in high school.

Apart from interviewing witnesses, Sanai also suggested that the Judiciary Committee “subpoena all intra Court emails and messages between Kavanaugh and Kozinski and all emails to and from Kozinski with links to his website.”

The fact that Kozinski hosted pornography on his website and forced some clerks to view it was one of the exposed behaviors that led to his resignation.

“The only way these important stories can be told is if Congress moves the spotlight from abstract procedures and statements of intent to the judges who made the judiciary safe for Judge Kozinski to satisfy his deviant needs. If this Committee, or the Judiciary Committee, does so, I have assurances that more people will step forward,” Sanai wrote.

He also mailed copies of the letter to Sens. Kamala Harris, D-Calif., and Richard Blumenthal, D-Conn., and Reps. Bob Goodlatte, R-Va., Jim Sensenbrenner, R-Wisc., Jerry Nadler, D-N.Y., and Ted Lieu, D-Calif., he said, but can’t be sure that they received them.

Feinstein and Grassley, he said, were the only two he made sure received the letter. “I spent quite a bit of time trying to get Feinstein to address it,” he said.

Feinstein was also contacted in July by Ford, a California professor who said that Kavanaugh sexually assaulted her while both were in high school.

“I am writing with information relevant in evaluating the current nominee to the Supreme Court. As a constituent, I expect that you will maintain this as confidential until we have further opportunity to speak. Brett Kavanaugh physically and sexually assaulted me during high school in the early 1980’s,” Ford wrote to Feinstein on July 30. “I have received medical treatment regarding the assault. On July 6 I notified my local government representative” — Anna Eshoo — “to ask them how to proceed with sharing this information. It is upsetting to discuss sexual assault and its repercussions, yet I felt guilty and compelled as a citizen about the idea of not saying anything. I am available to speak further should you wish to discuss.”

The New Yorker’s Ronan Farrow and Jane Mayer later reported that after her dealings with Feinstein’s and Eshoo’s offices, Ford stepped back. Feinstein, Farrow reported, “acted out of a sense that Democrats would be better off focussing on legal, rather than personal, issues in their questioning of Kavanaugh.”

After the interactions with Eshoo’s and Feinstein’s offices, the woman decided not to speak about the matter publicly. She had repeatedly reported the allegation to members of Congress and, watching Kavanaugh move toward what looked like an increasingly assured confirmation, she decided to end her effort to come forward, a source close to the woman said. Feinstein’s office did not respond to requests for comment.

Feinstein’s decision to handle the matter in her own office, without notifying other members of the Senate Judiciary Committee, stirred concern among her Democratic colleagues. For several days, Feinstein declined requests from other Democrats on the Judiciary Committee to share the woman’s letter and other relevant communications.

Ford’s attorney Debra Katz has since said that Feinstein handled the situation as well as she could have. “We do think that Feinstein did well by her, and we do think that people took this decision away from her, and that’s wrong,” Katz said. “If the #MeToo era teaches us anything, it’s that a person gets to choose when, where and how, and now this person is going to be injected into a life-altering blood bath.”

Kavanaugh’s credibility has also been called into question by his denial that he ever exploited information stolen from Senate Democrats during previous confirmation fights. Emails subsequently revealed that he did.

Sanai himself, in his letter, offered to testify. Given his history of combative exchanges, it would likely be a fiery affair. The appeals court that overruled the “vexatious litigant” designation added that the litigants in the case lacked “civility and courtesy.”

“In reversing the trial court’s order, we do not intend to signal our approval of the manner in which this litigation has been conducted. It has gone on far too long,” the court wrote. “It has consumed far too much of the judicial system’s limited resources. Gamesmanship appears too often to take precedence over reasonable efforts to resolve procedural disputes and to address the merits of the remaining controversy. Civility and courtesy are absent.”

The “vexatious litigant” designation relied, in significant part, on the complaints Sanai had been filing against Kozinski — complaints that were ultimately borne out.

Update: September 18, 2018
This story has been updated to include a comment received after publication from Sen. Chuck Grassley’s spokesperson.