The McDonald’s workers’ strike will be the first nationwide strike specifically targeting sexual harassment in the workplace. 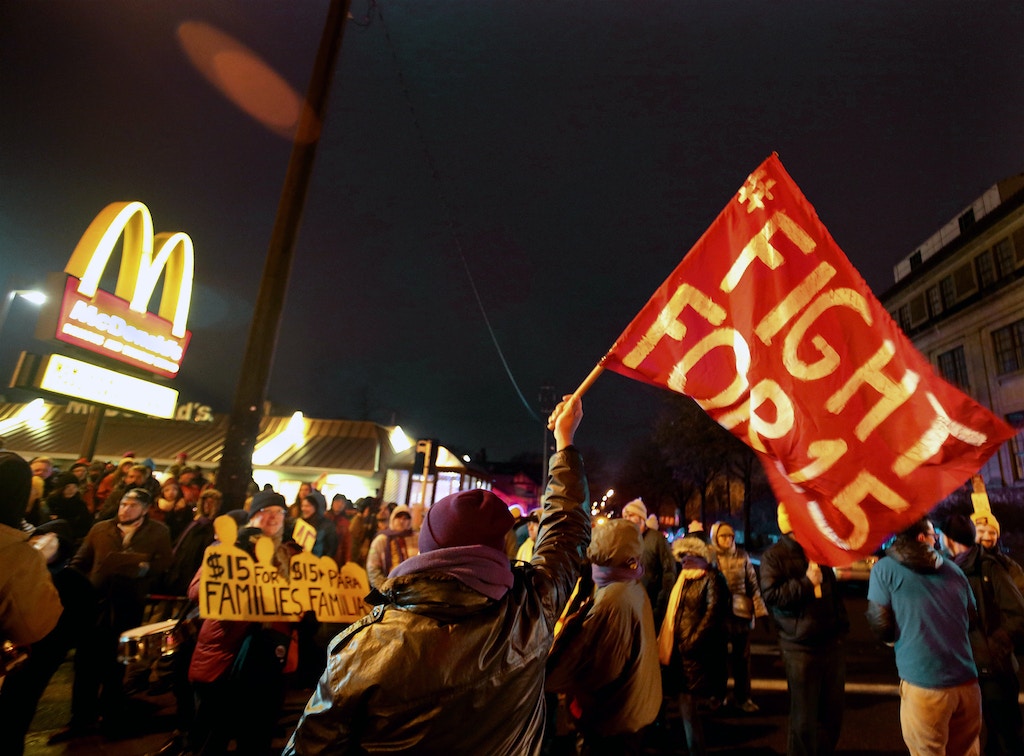 Protesters gather outside a McDonald’s restaurant in Minneapolis during a demonstration for higher wages as part of the National Day of Action to Fight for $15 on Nov. 29, 2016, in Minneapolis, Minn.

When Kimberly Lawson was first sexually harassed while working at McDonald’s in Kansas City, she did exactly what she was supposed to do. A co-worker, she said, had hit on her “constantly,” made lewd comments, and touched her inappropriately. “I filed a complaint, but nothing was done,” said the 25-year-old single mother of one. “He kept working on the same shifts as me.” When Lawson’s shift manager also began tormenting her with verbal sexual remarks, she didn’t even bother filing a complaint.

Galvanized by experiences like these, Lawson, who earns $9 an hour, joined with McDonald’s workers from 10 cities to organize a daylong strike on Tuesday. It will be the first nationwide strike specifically targeting sexual harassment in the workplace. The labor action also charts a new course for #MeToo, which has mostly featured women in high-profile and white collar industries. The strike marks a notable step toward shifting #MeToo into a movement inclusive of — and organized by — low-wage workers against corporate America. Coordinated as a part of the Fight for $15 movement, the strike makes clear that the battle against sexual harassment and assault is inextricable from a broader labor struggle.

“It’s historic. Women are coming together and standing up — and creating hope for other women across the country.”

“It’s historic,” Lawson told The Intercept. “Women are coming together and standing up — and creating hope for other women across the country.” Lawson, herself a Fight for $15 organizer, was shocked to learn how many fellow McDonald’s workers had shared her experiences.

This sort of endemic work-based abuse — affecting a largely low-wage and precarious workforce — cannot be fought with the tactics with which #MeToo found early success. Celebrated and professionally established women calling out powerful perpetrators gave important voice to the struggle against patriarchal violence and slayed some formidable giants. But it was never scalable as a tactic for workers without an audience and with little leverage over their employers. The decision to strike, therefore, is a crucial deployment of the one leverage workers do have: a collective and visible withdrawal of labor.

“These are low-wage workers. They are the most vulnerable. They need these jobs, and the jobs themselves pay the lowest: $7.25, $8, maybe $9,” said Mary Joyce Carlson, a labor lawyer providing counsel for Fight for $15 and the McDonald’s workers. “Powerful men are not in their universe and they don’t have celebrity power themselves. These workers are taking on a corporation. They have to act collectively.”

“An Exercise in Frustration”

Previous efforts to take on the fast food giant on the issue of sexual harassment have yielded few results in terms of shifting corporate behavior, Carlson told The Intercept. She filed numerous complaints with the Equal Employment Opportunity Commission on behalf of McDonald’s workers in 2016, but has seen no changes made by the corporation since.

Meanwhile, McDonald’s has maintained the line that it has “zero tolerance” for sexual harassment in the workplace — a claim belied by the countless instances that have been tolerated by virtue of inaction. “We have policies, procedures and training in place that are specifically designed to prevent sexual harassment at our company and company-owned restaurants,” the company said in a statement to the Associated Press, “and we firmly believe that our franchisees share this commitment.”

“It’s an exercise in frustration” said Carlson. It was the emergence of #MeToo this year, she explained, that opened up opportunities to further the fight. Both the walkout and further EEOC cases on behalf of McDonald’s workers this year have been backed by the Time’s Up Legal Defense Fund, a #MeToo-inspired legal aid group for workers who have experienced sexual assault. At the same time, McDonald’s workers involved in Fight for $15 efforts have seen the success of strikes and walkouts, including the role such tactics played in winning Disney World workers a $15 hourly wage.

While hundreds of McDonald’s employees have been attending weekly “women’s meetings” in advance of the strike, it’s not yet known how many people will walk off the job at noon on Tuesday, the designated time. Organizers expect strikes at numerous franchises in Chicago; Durham, North Carolina; Kansas City, Missouri; Los Angeles; Miami; Milwaukee; New Orleans; Orlando, Florida; San Francisco; and St. Louis.

No Unions at McDonald’s

“If these workers had a union, they would have somewhere to go with these complaints. Now there’s no safe place.”

Unlike the Disney workers, however, McDonald’s workers have no union representation — an issue that organizers believe has contributed to the pervasiveness of workplace harassment. “If we had a union, things like this wouldn’t happen so much,” said Lawson. Carlson echoed her point: “For one thing, if these workers had a union, they would have somewhere to go with these complaints. Now there’s no safe place. And with a union, there’s much less fear of retaliation.”

The fast food giant has been immovably hostile to unionization, hiding behind its franchise model to avoid corporate responsibility. As such, Tuesday’s action — like the powerful teachers strikes in West Virginia, Arizona, and beyond earlier this year — has no option but to be a wildcat strike, the term used for strikes that happen without permission from a union’s leadership. Nonetheless, Lawson told me that retaliation for the strike is not a concern for her: “We’re fearless.”

In striking on Tuesday, McDonald’s employees join a growing cohort of workers weaponizing the attention and energy accorded to #MeToo and the Women’s March into concrete collective action. Hotel workers took to the streets by the thousands to protest rampant sexual harassment in their industry — and won their demand for panic buttons from five major hotel brands. Farmworkers of the Coalition of Immokalee Workers went on a fast to push the restaurant chain Wendy’s to join the Fair Food Program and incorporate legally binding accountability measures for dealing with sexual harassment.

The McDonald’s strikers’ demands are clear and practical: improvements in procedures for how complaints are received and responded to; mandatory anti-harassment trainings for all managers and employees; a hotline which employees can call without the risk of retaliation; and a national committee to address sexual harassment, comprised of workers as well corporate and franchise representatives; and leaders of national women’s groups. Such demands should be easily met by a multibillion-dollar corporation, but then so, too, should paying workers a living wage with benefits. Those struggles, too, will continue to be fought.