The Best Evidence That the NFL Effectively Banned Colin Kaepernick? His Name Is Eric Reid.

Eric Reid was the first NFL player to join Colin Kaepernick in his anthem protest. He can’t get a job in the NFL this season. 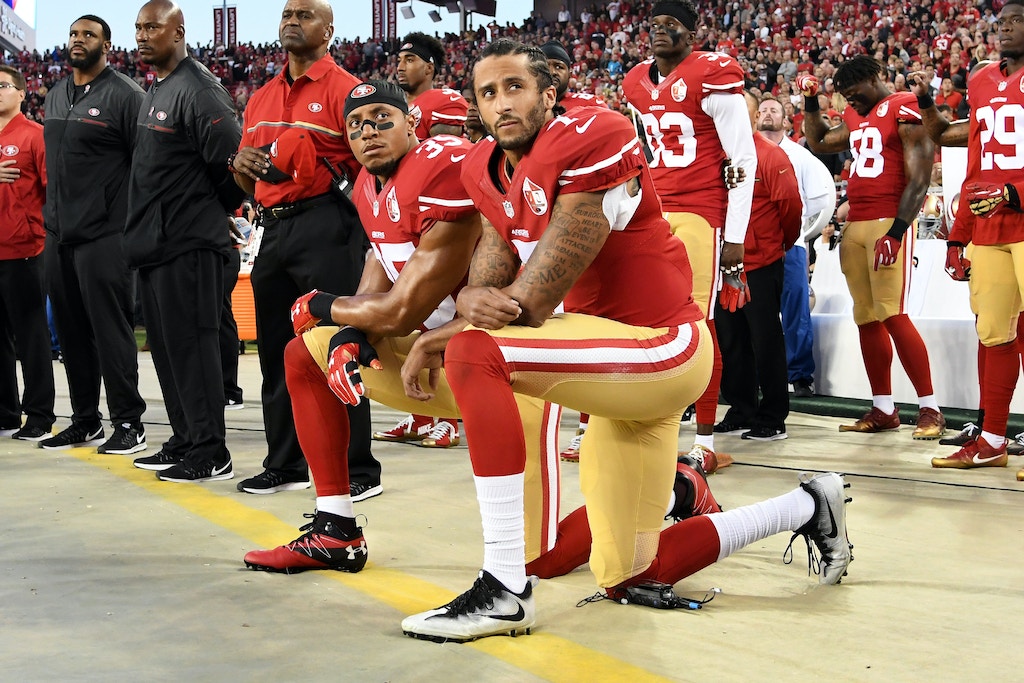 Colin Kaepernick, right, and Eric Reid of the San Francisco 49ers kneel in protest during the national anthem prior to playing the Los Angeles Rams in Santa Clara, Calif., on Sept. 12, 2016.

Colin Kaepernick should have an NFL job right now. He’s arguably better and more accomplished than half of the starting quarterbacks currently in the league. He’s better and more accomplished than every backup. Let’s not even talk about third-stringers. The notion that Kaepernick is not one of the top 100 quarterbacks in the league is preposterous.

Just for argument’s sake, though, let’s work from the premise that Kaepernick is not in the NFL right now for purely football reasons. Let’s start at the position that every quarterback in the entire league is better, more skilled, more capable, more accomplished than he is. All of them. And that he’s been out of the NFL for over 500 days simply because it has been determined on football grounds that he would not make a single team better. You’d be hard-pressed to find a single current or former NFL player to agree with such a position, but let’s just put all that aside for a moment.

Try to make the argument that Eric Reid doesn’t belong on an NFL roster for football reasons. It’s impossible.

Now explain why Pro Bowl safety and defensive back Eric Reid doesn’t have a job.

Reid is 26 years old and injury-free. He can play multiple positions and is an ethical, generous leader on and off the field. His rookie contract just expired, and he is widely known as a coachable, team-first athlete. Try to make the argument that he doesn’t belong on an NFL roster for football reasons.

It’s impossible. A deep analysis of his stats and value has already been done. Everybody who plays at Reid’s level has a job and a well-paying contract except for Reid. The NFL is riddled with athletes who’ve been suspended and arrested and convicted — and they’ve routinely been given second and third and fourth chances. But not Eric Reid.

That’s because Reid is clearly being punished — not just for taking a knee on the field, which he did, but for doing so alongside Kaepernick.

Reid was the first NFL player to join Kaepernick in his protest against systematic racism and police brutality in this country. As the protest gained steam, a small handful of black players joined in — some continue to this day, either by taking a knee or remaining in the locker room during the national anthem. But only Reid did so side by side with Kaepernick for an entire season.

Reid was the first NFL player to join Kaepernick in his protest. It’s difficult to imagine any other reason why he does’t have a job in the NFL this season.

We can’t know for sure, but it’s difficult to imagine any other reason why Reid does’t have a job in the NFL this season. It may sound far-fetched, but you have to remember that many NFL team owners and executives have said that they “hate” Kaepernick and have even gone so far as to compare him to a convicted murderer.

I suspect team owners and executives hate Kaepernick so much that their animosity toward him spread to Reid. I can’t make sense of it any other way. I’ve looked at Reid’s forced exodus from the league from every imaginable angle. It’s hard to believe that a mainstream American company — and that’s what the NFL is, a corporation — is willing to so obtusely tip their hand like this. But I think that’s exactly what they’ve done here. It’s preposterous!

I’m a sports junkie — have been my entire life. On sports talk radio, I regularly hear both the hosts and callers say that they think Kaepernick has been banished from the NFL — not just because of his on-the-field protest, but because he wore socks portraying cops as pigs or a shirt featuring Malcolm X talking to Fidel Castro. Let’s just pretend, just for the moment, that those articles of clothing — not the protests themselves — were the things that pushed NFL owners to effectively ban Kaepernick. Let’s say that that’s the case.

Then how do you explain Eric Reid?

No one has snapped pictures of Reid wearing politically radical clothing. He never rocked a full afro. He didn’t put up a Black Power fist during warmups or after a game.

What he did, though, was kneel by his teammate Colin Kaepernick’s side. It sure looks like it’s cost him everything.