Trump is creating an impossible choice between getting help and legal residency — his administration’s latest tool of ethnic cleansing. 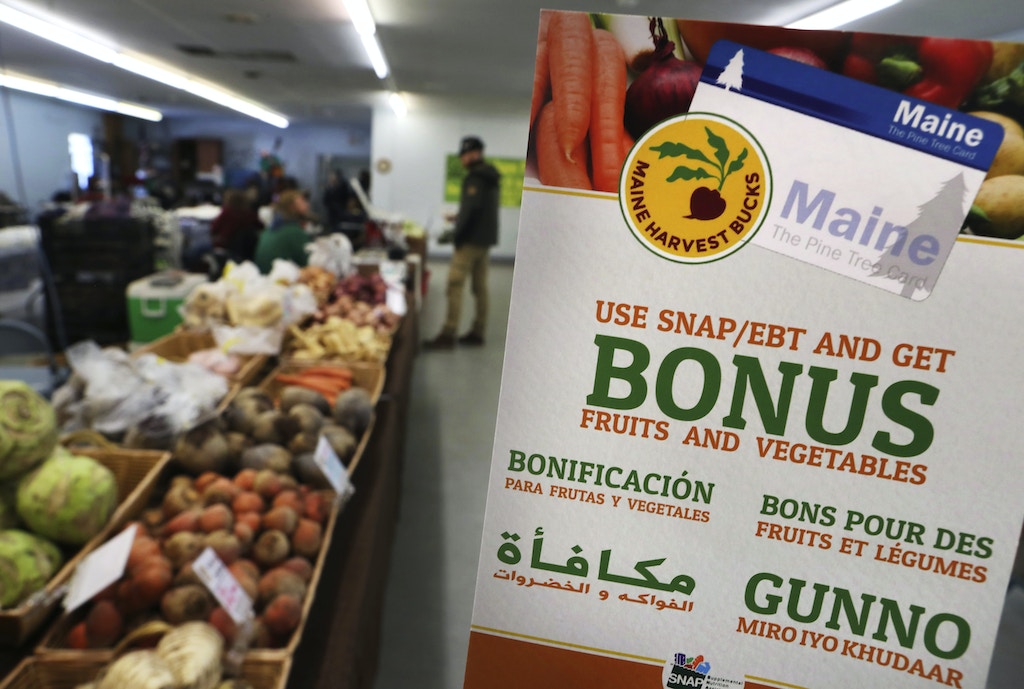 A sign advertises a program that allows food stamp recipients to use their electronic benefit transfer cards to shop at a farmer’s market in Topsham, Maine, on March 17, 2017.

Over the weekend, the Trump administration announced new and cruel immigration rules. The rules will not produce the visceral horrors of caged children, but threaten to imperil the well-being — indeed, the lives — of thousands of immigrants in this country. The proposal, which does not need congressional approval, will make it harder for legal immigrants to obtain new visas or green cards if they use, or have used, public benefits, including food aid and Medicaid.

As with the draconian “zero-tolerance” policies President Donald Trump imposed on the border, the administration is presenting this latest assault as merely an extension and thorough application of existing legislation. But the proposal is one of the most radical overhauls in immigration standards in decades. It makes clear that, for this administration, immigration policy is a matter of white supremacist social engineering aimed at excluding and decimating poor, predominantly nonwhite immigrants. Even those who have followed every U.S. law — people here with full legal authorization, abiding by all criminal statutes — are now at risk for having used social services to which they are entitled.

The plan functions by dramatically expanding the category of “public charge,” a concept that has been a part of immigration determinations since 1882, when the Immigration Act enshrined the exclusion of “undesirables” as a tenet of U.S. immigration policy. If a person is a “public charge” or deemed likely to be a “public charge” by the immigration authorities, that person can be denied temporary visas and permanent resident status.

This restriction is not new and has always relied on problematic notions of undeserving immigrants draining American resources. That premise itself is belied by heaps of statistics showing that — in almost every way, whether economically, culturally, or socially — immigrants contribute dramatically more to American society than they draw from its resources.

Under the new rules, low-income immigrants may be forced to choose between public benefits and the ability to live and work in the U.S.

What has changed is the definition of a “public charge.” For decades, the classification has been narrow: Under current law, established since 1999, an immigrant is only a “public charge” if they receive most of their income from state assistance or live long term in an institution funded by the government. Health and food benefit programs like Medicare, Medicaid, and SNAP (formerly known as food stamps) have never before come into consideration.

Under the new rules, crafted by the impossibly villainous White House adviser Stephen Miller, low-income immigrants may be forced to choose between health care and food provisions, on the one hand, and the ability to live and work with authorization in the U.S., on the other. Current legal immigrants seeking change or renewal of immigration status, as well as those applying to move to the U.S. from abroad, will both be assessed for their potential to become “public charges” by these new, harsh standards.

The new system will thus punish individuals for making use of public benefits, even in the past, to which they were and are legally entitled, and never before would have disqualified them from remaining in the country.

“This is Trump’s new evil plan to keep separating families. He’s forcing parents to choose between keeping their children healthy or keeping their family together,” said Jess Morales Rocketto, political director for the National Domestic Workers Alliance. “He’s willing to risk a national health crisis and putting our children at risk of diseases and malnutrition just to attack immigrant parents. That’s how evil Trump is.” Latinx families, as well as disabled immigrants, are particularly vulnerable to the new rules.

“She didn’t apply for any of the benefits they are eligible to because she fears it will kill her only option to become a resident, so she has had to struggle even harder to support her kids on low-paying jobs.”

Morales told The Intercept that even though the proposal has not yet been put into effect, it is already functioning to scare immigrants out of seeking health and food assistance. “Like Laura, one of our leaders from Colorado, who recently got divorced and needed as much help she could get to start a new life with her three children,” Morales said. “She didn’t apply for any of the benefits they are eligible to because she fears it will kill her only option to become a resident, so she has had to struggle even harder to support her kids on low-paying jobs.”

Jackie Vimo, a policy analyst with the National Immigration Law Center, told The Intercept that the proposed rules have already begun working by spreading fear, even before official publication. “I am hearing stories of women returning breast pumps to WIC” — a public assistance program for women and infants — “and disenrolling from Medicaid for cancer treatments because they are worried these things could impact the green card application of a spouse, child, or other family member,” Vimo said in an email. “Early drafts of this proposal were leaked to the press in early 2017, and the rumors about the anticipated rule have spread fear in immigrant communities across the nation.”

The announcement of the new rule on the Department of Homeland Security website stated that it “promotes self-sufficiency and protects American taxpayers,” bartering in historically pernicious tropes about “welfare” and worthiness. Meanwhile, in the published draft of the proposal itself, the DHS admits that that the plan could promote, among other ills, “worse health outcomes, including increased prevalence of obesity and malnutrition, especially for pregnant or breastfeeding women, infants, or children,” “increased rates of housing instability,” and “increased poverty.”

There’s no inconsistency in the government citing these risks and trumpeting their plan nonetheless: Risks to the immigrant poor are a feature, not a bug. The knock-on negative effects to the citizen population — 10.4 million children who are citizens live with at least one immigrant parent — are secondary to an administration driven by white supremacy.

The announced proposal is less extreme than previous drafts, leaked earlier this year, which included even more benefits to count toward disqualifying “public charge” status and would have applied to the use of benefits like Medicaid and food stamps for U.S.-born children of immigrants. Previous drafts also sought to include current green card holders seeking citizenship or green card renewals. (Having myself relied on Medicaid for a short time as a green card holder, I can attest to the fear: These draft proposals induced panicked tears.) And while not everything on Miller’s wish list has made it to the final proposal, what remains will devastate the lives of tens of thousands of immigrants and their families.

DHS said that the proposed rules will be published in the Federal Register in “a few weeks,” at which point they will be open for public comment for 60 days. These comments will allegedly each be considered before the plan is implemented. As with the family separation policy, this proposal is deserving the utmost public opprobrium and resistance.

The history of the “public charge” category is a dark one; it is a malleable designation that has been long been molded to suit shifting iterations of racist immigration policy. As Neera Tanden, president of the Center for American Progress, noted in a statement, “It was abused in the past to keep out Jews fleeing Nazi Germany, Irish Catholics, LGBTQ people, people with disabilities, and unmarried women, among others.” Little wonder the Trump administration is deploying the same tool in its ongoing mission of ethnic cleansing.