Trump’s outgoing U.N. ambassador is getting applause from the media for being so moderate. But Haley has been a champion for right-wing causes. 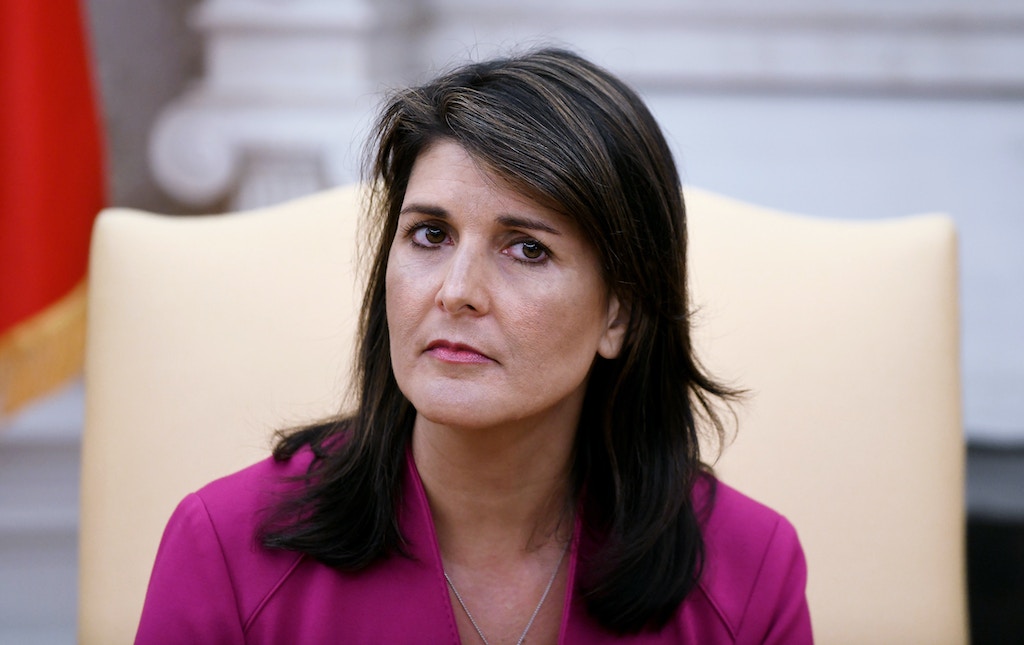 Nikki Haley, the U.S. ambassador to the United Nations, during a meeting with President Donald Trump in the Oval Office of the White House on Oct. 9, 2018 in Washington, D.C.

That was how the New York Times referred to U.S. Ambassador to the United Nations Nikki Haley, on Tuesday, in a tweet announcing her shock resignation from the Trump administration.

Such a description beggars belief. There is nothing “moderate” about the right-wing Republican and former South Carolina governor, who went “from Trump critic to Trump envoy” in 2017. Nor has there been any evidence of moderation from her since arriving at the U.N., whether on issues related to diplomacy, human rights, or international law.

Was Haley, after all, a “moderate” when she told the Christian Broadcasting Network in May 2017 that the Western Wall belonged to Israel, and thereby broke with the longstanding U.S. government policy of not taking a position on the status of the holy sites in Jerusalem? “It was an early instance of Haley’s role as a smoke signal for a significant Trump administration shift in U.S. policy,” noted the New York Jewish Week.

Was Haley a “moderate” when she threatened that the United States would be “taking names” of U.N. member states if they dared to vote against the Trump administration’s recognition of Jerusalem as the capital of Israel in December 2017? “As you consider your vote,” she wrote in a letter to her fellow U.N. ambassadors, “I encourage you to know the president and the U.S. take this vote personally.”

Was she a “moderate” when she was beating the drum for war with Iran in front of an audience of neoconservative hawks at the American Enterprise Institute in September 2017? Haley’s address was riddled with errors and falsehoods, from claiming that “Iran has been caught in multiple violations over the past year and a half” (it hadn’t) to suggesting that the deal “wasn’t supposed to be just about nuclear weapons” (it was). The AEI speech was “dishonest in key ways,” Ilan Goldenberg, who served as the Iran team chief in the Pentagon under Barack Obama, told me last year.

Was she a “moderate” when she announced the withdrawal of the United States from UNESCO, the U.N.’s educational, science, and cultural organization in October 2017, calling it a “chronic embarrassment” that helped the Palestinians at the expense of the Israelis? Remember: Even the Bush administration buried the hatchet with UNESCO back in 2002. And the opening line of the U.N. organization’s 1945 constitution — “Since wars begin in the minds of men, it is in the minds of men that the defenses of peace must be constructed” — was penned by the American poet and diplomat Archibald MacLeish.

Was she a moderate when she was leading the U.S withdrawal from the U.N.’s New York Declaration for Refugees and Migrants in December 2017 because the U.N.’s “global approach” is “simply not compatible with U.S. sovereignty” and “our decisions on immigration policies must always be made by Americans and Americans alone”? Even the New York Times itself reported “that the American absence was significant and could impact the agreement’s effectiveness.” The paper quoted U.N. Secretary General António Guterres as saying: “Countries have the right and even the responsibility to determine their own migration policies, and to responsibly manage their borders. But they must do so in full respect for human rights.”

Was she a “moderate” when she responded to the killing of 62 Palestinians in a single day in Gaza in May 2018 by praising Israeli “restraint” and then walking out of the U.N. Security Council chamber as the Palestinian ambassador began making his statement? Or when she was defending the United States’ decision to cut all funding to the U.N. Relief and Works Agency for Palestine Refugees in August 2018, by citing the “endless number of refugees” and complaining that “the Palestinians continue to bash America”? Even Israeli defense officials have expressed concerns over the cuts to UNRWA funding.

Was she a “moderate” when she was withdrawing the United States from the U.N. Human Rights Council in June 2018, because of its “chronic bias against Israel”? Or when she suggested that leading human rights organizations such as Amnesty International and Human Rights Watch’s attempts “to block negotiations and thwart reform” contributed to the U.S. decision to withdraw from the council? Human Rights Watch U.N. director Louis Charbonneau told the BBC it was “preposterous” to suggest that rights groups were undermining attempts to reform the UNHRC and that Haley “was taking a page out of the book of some of the worst governments around the world.”

Was she a “moderate” when she was defending the Trump administration’s “zero tolerance” policy of separating children from their parents at the U.S.-Mexico border in June 2018 — a policy described as “child abuse” by the president of the American Association of Pediatrics? “Neither the United Nations nor anyone else will dictate how the United States upholds its borders,” Haley defiantly declared.

To call Haley a “moderate” is to empty that word of all meaning or import. Rather, she is, as I have written elsewhere, a darling of the neocons, a belligerent anti-Iran hawk, and a blind defender of Israeli crimes. On Monday, the outgoing U.S. ambassador to the U.N. sat next to the president in the White House and delivered her own Trumpian resignation statement, claiming in defiance of both the polling evidence and what we all saw with our own eyes at the U.N. General Assembly last month, that Trump had forced the rest of the world to “respect” the United States.

“Haley’s tenure was an unmitigated disaster for the cause of human rights and international law,” Matt Duss, foreign policy adviser to Sen. Bernie Sanders and former president of the Foundation for Middle East Peace, pointed out in a tweet on Wednesday. “The campaign, already well underway, to rebrand her as a sensible foreign policy centrist will make MBS’s PR tour look like amateur hour.”

Will this rebranding work? For now, she is a “moderate Republican,” according to the paper of record. We can only hope it won’t stand, and that history books, as the American Civil Liberties Union tweeted on Wednesday, “will remember Nikki Haley as a key player in the Trump administration’s campaign to undermine universal human rights and international bodies.”

What has happened to our discourse? And to our political coverage? Extremists are recast as moderates; the abnormal is normalized. To borrow a line popularized by conservatives since November 2016: “This is why Trump won.”