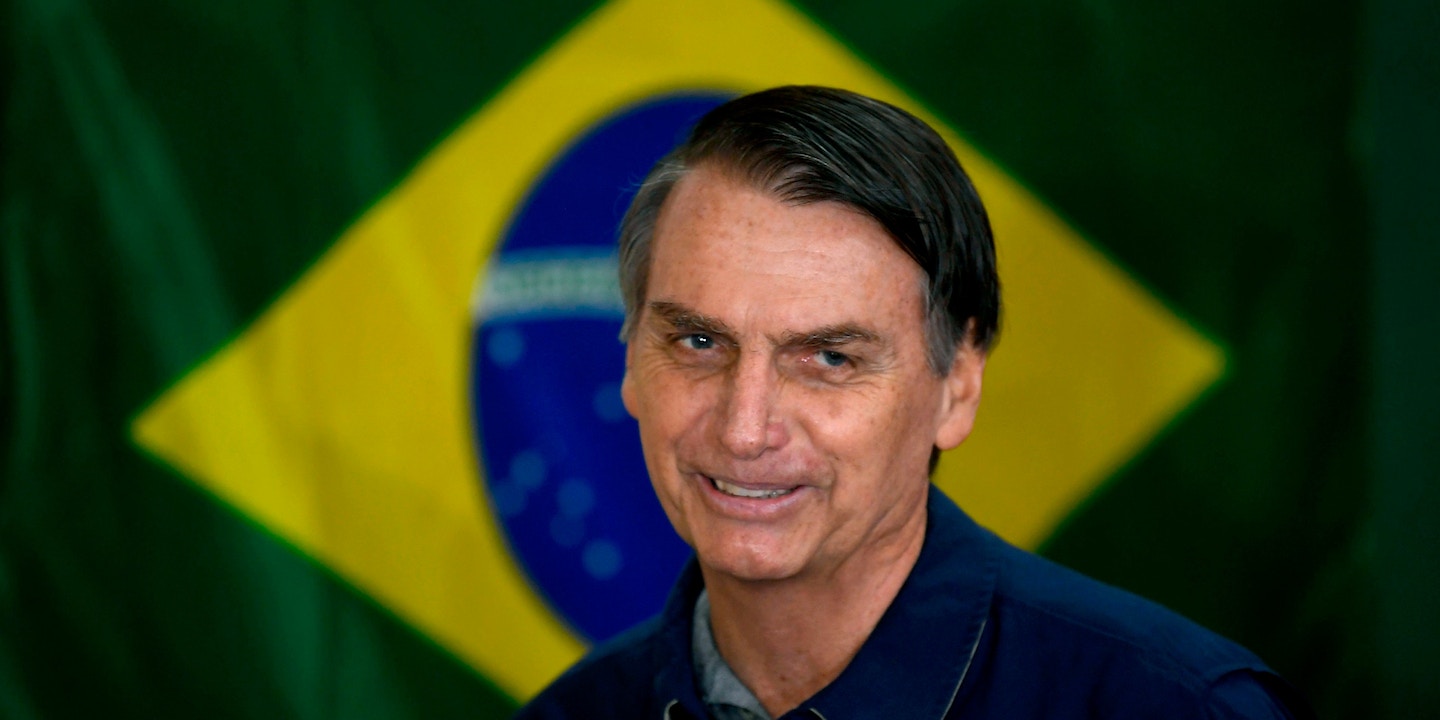 In a giddy investor call on Thursday, Timothy Hassinger, chief executive officer of Lindsay Corp., the Nebraska-based farming equipment manufacturer, referred to the far-right politician as “considered strongly as pro-ag,” calling his likely election victory a “bullish opportunity for us.”

Bolsonaro surprised political observers with a strong 46 percent showing in the first round of the country’s election, and is expected to easily defeat Workers’ Party candidate Fernando Haddad in an October 28 runoff vote.

Many human rights advocates are alarmed by Bolsonaro’s repeated praise for Brazil’s military dictatorship and a platform calling for a more repressive approach to the country’s crime and social problems, which includes reintroducing the death penalty and making it harder to investigate and prosecute cops who kill in the line of duty.

But the global financial community is pleased by his strong performance, heartened by his choice of Paulo Guedes as his chief economic adviser. A right-wing, University of Chicago-trained banker, Guedes would take charge of finance, planning, trade, and other domestic policies. Bolsonaro’s economic record in the Brazilian Congress was more moderate, and he has been criticized for his lack of economic literacy, but his choice of Guedes has been seen as a signal that he will embrace the neoliberal consensus that investors have been pressuring Brazil to execute.

Guedes has promised to sell off state assets, cut the public pension system, revise the tax code, and deregulate the economy. Another Bolsonaro adviser, Nabhan Garcia, told Reuters that the administration would slash fines for farmers who violate environmental rules in sensitive areas like the Amazon.

Last year, The Intercept covered a campaign event in Deerfield Beach, Florida, at which Bolsonaro told the crowd, “The press says I do not understand the economy. Look, as far as I know, Ronald Reagan didn’t either, and he was one of the best American presidents.”

In September, when polling numbers suggested that Haddad was gaining steam, the Brazilian currency, the real, plummeted to multiyear lows, but has since bounced back by more than 12 percent against the U.S. dollar.

As news of Bolsonaro’s performance spread, investors immediately responded. CNBC noted that “the benchmark Brazilian Bovespa index gained 4.6 percent” the Monday after the election, while the “iShares MSCI Brazil exchange-traded fund (EWZ) jumped 6.74 percent its biggest one-day gain since May 19, 2017, when it rose 6.75 percent.”

A number of finance industry analysts took to the airwaves to lay out how impressed Wall Street investors are with the prospects of a Guedes-guided Bolsonaro administration.

Julia Leite, a Bloomberg News reporter who covers Brazil, appeared on Bloomberg Markets on October 8 and offered that view. “Markets are reacting really well,” she said. “Markets have a clear preference for Bolsonaro, whose economic adviser is very liberal, who wants to privatize everything, wants to have a smaller state. … So for markets, this is really clear-cut. They want Bolsonaro.”

Leite noted that, after the first round election results came in, Bolsonaro did a Facebook Live show featuring not his vice presidential candidate Hamilton Mourão, but Guedes. “Yesterday evening, Bolsonaro didn’t hold a presser but he held a Facebook Live, sitting next to him, not his VP, but his economic adviser,” she noted. The Wall Street Journal editorial board heaped praise on Bolsonaro, calling him the “Brazilian Swamp Drainer” and downplaying his violent and antidemocratic rhetoric. At a rally on Sunday in São Paulo, he said he would “wipe the map of these red bandits,” referring to his political opponents. At a previous rally, he said, “Let’s shoot the petralhada here,” using an offensive term for Workers’ Party voters.

Shayo also commented on the Brazilian federal legislature, which shifted even further to the right as a result of the elections. “What we saw, especially in terms of Congress composition, is an important backing for Bolsonaro’s parties, which had no representatives virtually and now will have a decent number of representatives, over 50. And I also expect to see many of the parties that are at the center of the political spectrum to join Bolsonaro and help build this urgent agenda of reforms that Brazil needs,” she said.

The JPMorgan Chase strategist also offered some commentary on what she hopes Bolsonaro would achieve in his first term, if he is indeed elected. She pointed to his willingness to cut social security programs.

“Our view is that this election is his to lose at this point,” she said. “Beyond this, we need to see a clear up of his economic proposals especially vis-à-vis social security reform and if there will be willingness from Congress to vote [for] this agenda.”

Bloomberg Markets followed up by asking if this right-wing agenda would be imperiled by a potentially split Congress.

“I am not too worried about this. In the beginning, indeed the Congress is fragmented, but it tends to join together the forces of a president that is elected especially in the first term. Something that we have not seen in Brazil for eight years. So at the beginning, at least Bolsonaro should have a decent, very, very decent support. We have seen the opposition gathering about 30 percent of the vote. This is significant. But he will be able, I think, I hope so at least, to have a margin of maneuver to get the reforms going, which is what Brazil urgently leads.”

Not everyone is on board, however. Some Brazilian economists question Bolsonaro’s commitment to the neoliberal vision that Guedes represents, citing his own statements as proof. Earlier this month, in an interview with TV Bandeirantes, the candidate contradicted his economic advisers and said he was against the privatization of state-led electric company Eletrobras and the core operations of the Petrobras oil company. “Imagine you have a henhouse under your home and live off of it. When you privatize, you don’t have the guarantee of eating a boiled egg.” He added, “China isn’t buying in Brazil, it’s buying Brazil. You’re going to leave Brazil in the hands of the Chinese?” By noon the following day, Eletrobras stock dropped 14 percent.

“The market believes what it wants. But for 30 years, he had a statist posture. That’s not going to change overnight,” economist Sergio Vale told the conservative Estado de São Paulo newspaper.

On CNBC’s Squawk Box, pundits mused that critics are too focused on Bolsonaro’s explicit threats to return Brazil to a military dictatorship; rather observers should view his economic policies as the true barometer of freedom.

“You’re going to read a lot about what a threat to democracy this individual is,” said CNBC contributor Michelle Caruso-Cabrera. “But what I find astounding, people are very worried about lack of political freedom and a return to a political dictatorship in Brazil, but they have been unwilling to acknowledge that there’s been an economic dictatorship in Brazil for decades.”

The other guests agreed that Bolsonaro’s candidacy represented “economic freedom.” Earlier this month, Brazilian investment firm XP Investimentos polled 187 institutional investors who, on average, rated Bolsonaro as the most economically liberal of the top four contenders.

CNBC host Joe Kernan asked if it would be fair to compare Bolsonaro’s opponent, Fernando Haddad, as just as “far left” as Sen. Bernie Sanders, I-Vt. Caruso-Cabrera agreed it was apt, noting that both believe in single-payer health care. “Absolutely,” she said.

Lack of access to quality public health care is consistently the most cited problem in polling. Seventy percent of Brazilians are against privatizations, according to a Datafolha poll from last December. Earlier this year, a government-funded poll found that only 14 percent of the population supports social security reform. Popular opinion forced President Michel Temer and Congress to put many unpopular measures on the shelf until after the election. They are expected to take them on again during the lame-duck session this year, but Temer told allies on Sunday that he does not expect to be able to push through social security reform with the current Congress. Previous attempts brought workers into the streets in mass demonstrations.

“Again the market is grossly underestimating future risks,” said Paulo Leme, the former president of Goldman Sachs in Brazil, in an interview with Estado de São Paulo. “The market is falling into a new error by underestimating the difficulty of governing,” he continued, adding that he felt both Bolsonaro and Haddad are “terrible.”