Stacey Abrams Could Have a Hidden Voter Advantage in Overlooked Communities, According to Georgia Campaign Contribution Data

An analysis of reported campaign contributions suggests there is support for candidates reflected in donor bases that may be missed by traditional polling. 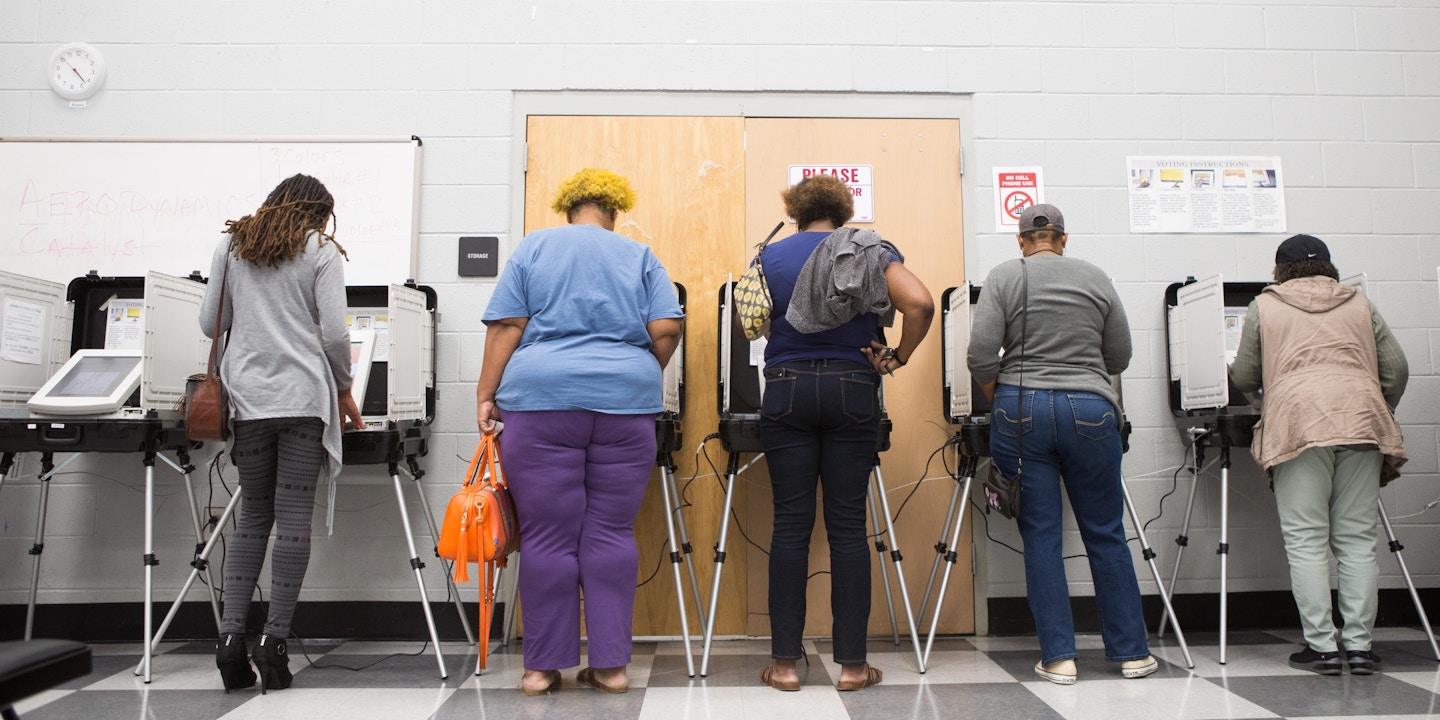 After a season in which pollsters botched a significant number of important primaries, traditional polling is again on the defensive. A project developed by two researchers could provide a supplement to the predictions by using donation data to gauge voter enthusiasm in communities underserved by polls — thereby presenting a clearer view of the electorate.

Bobby Constantino, a former senior program associate at the Center on Sentencing and Corrections at the Vera Institute of Justice, whose work focused on providing data-driven technical assistance to states, was one of the researchers involved in developing the alternative predictive method. He showed The Intercept how the project used donation data and mapping to identify pockets of support for Boston’s Ayanna Pressley and other insurgent primary candidates; he also pointed to the Georgia governor’s race between Stacey Abrams and Brian Kemp, as well as the U.S. Senate race in Texas between Beto O’Rourke and Ted Cruz as areas where traditional polls are missing a chunk of the electorate, and where potential upsets may occur.

“Democrats might be able to gain as many as 20 percentage points simply by running candidates of color who inspire voters in the country’s most historically marginalized communities,” Constantino said.

According to Constantino’s research, Abrams, the Democratic nominee in the Georgia race, could pick up heavy support from poor, black urban areas in Atlanta that aren’t being accounted for in polling. Based on donations to the Abrams campaign from those communities, especially in comparison to 2014 nominee Jason Carter, Constantino believes there’s an upsurge of support for Abrams that’s thus far been missing in polls that show the race in a dead heat.

“We suspect the Georgia gubernatorial race will be telling, absent any vote suppression,” said Constantino.

It was a similar situation in the primary: Polls showed Abrams leading by 12 percentage points, with roughly half of voters undecided in the final weeks leading up to the election, and she ended up beating her opponent, Stacey Evans, by 53 points. Of the three zip codes above, Evans only received one donation, from the 30310. The Abrams and Pressley results, Constantino told The Intercept, are why he believes that the results in the general election could outperform the polls by double digits.

“There appears to be a strong nexus between concentration and spread of in-district contributions and election outcomes,” Constantino told The Intercept.

Constantino and his fellow researcher, Kristin Johnson, have already used the method to show how tracking donations can be used to predict outcomes in Massachusetts. When The Intercept interviewed Pressley in July, her campaign said internal polling showed her to be within 4 points of incumbent Congressperson Mike Capuano — polling that was done before Alexandria Ocasio-Cortez won her late June primary race in Queens, New York, and gave Pressley a shout out, increasing the Boston city councilor’s profile. A source inside the campaign, speaking on background, told The Intercept that the campaign’s polling methodology was not different from that of other polls, but that the campaign believed it had a better sense of the electorate and therefore targeted a mix of likely voters they felt confident in.

But traditional polling didn’t show the same results — to their chagrin. In August, local radio station WBUR showed Pressley to be 13 points behind the incumbent. A month later, Pressley beat Capuano by 17 points.

Constantino’s team used data from the Massachusetts Office of Campaign and Political Finance to map out the contributions to both Pressley and Capuano. By importing the data into Google Maps by way of Microsoft Excel spreadsheets, the group was able to place donations within the district map. Donation amounts were less important than demographics, said Johnson, and weren’t used in the model.

“I didn’t think the amount of money was significant; what was significant was that the household median incomes were low,” said Johnson. “They were opening their purse to donate to campaigns, so it wasn’t necessarily the amount that was important, but rather that it identified a household which sought out the ability to provide that support.”

The data bears that out, especially once transferred to the map. Capuano’s in-district cash was clustered around the north end of the district, which is more wealthy but less populated. Pressley, on the other hand, had strong support throughout and far outraised Capuano in the poorer southern end of the district that has a large minority population. Those data points reflected the turnout and the heart of Pressley’s victory. Such a spread of donations in poorer areas might indicate that the polls are off and that voters in poorer neighborhoods are energized — people who pollsters presume will not have turn out in large numbers, meaning their views are discounted in polls. Large turnout in marginalized communities can prove the polls wrong; areas with a low voter turnout experiencing a mushrooming of donations where there’s traditionally no major campaign investment can be an indicator of an upset.

“Pockets of donations in communities traditionally overlooked by polling may mean that there will be upswell of support the polls don’t catch,” said Constantino.

Brian Schaffner, a professor of civic studies at Tufts University, said that the way Constantino and Johnson employed their data could be a useful tool to help predict election outcomes in primary races. In primaries, polling is at a disadvantage when it comes to predicting what will happen: Few people are voting, and the hard lines of political partisanship are not in play. Schaffner explained, in an interview with The Intercept, how the vote can swing within a short amount of time.

“The main thing that predicts your voting is what party you’re with,” said Schaffner. “But in a primary, everyone’s the same party, so a lot of that is washed out.”

But Chris Tausanovitch, a professor of political science at the University of California, Los Angeles, is more skeptical about the methodology. Without a lot of elections to draw from thus far, Tausanovitch said social scientists can’t draw any conclusions from the data alone.

“What we’re being told about why a given map indicates a candidate has a chance of winning is different in each case,” said Tausanovitch. “It’s not always clear.”

Tausanovitch suggested an exhaustive approach to using the data more appropriately, one that would develop a forecasting model that does not rely on what he referred to as “post hoc explanations” for election results. By getting donation numbers from every race and seeing where the money comes from, he says, one could potentially use the financial data to predict outcomes.

“You have to define the data the same way in every case, base it in a firm notion of why it matters, then use it in as many cases as possible and show how that’s predictive,” said Tausanovitch.

Even then, Tausanovitch isn’t sold on the idea that financial data is enough to hang any major prediction on. There are just too many questions remaining, though investigating the correlation between different ways of thinking about donations and election outcomes could be a good starting point for further research.

“It wouldn’t convince me that donations are causing outcomes like enthusiasm,” said Tausanovitch. “But it could be useful for thinking about what factors matter.”

Johnson was careful to emphasize that the methodology she and Constantino used in their project isn’t meant to replace polling. Rather, it’s a supplement to existing predictive methods. “It’s an overall way to analyze data,” said Johnson. “And there’s a benefit to include it in election predictions.”