Schumer has sided with the GOP on Wall Street, Israel, Iraq, Iran, and Facebook. Almost any other Democrat should be Senate minority leader instead. 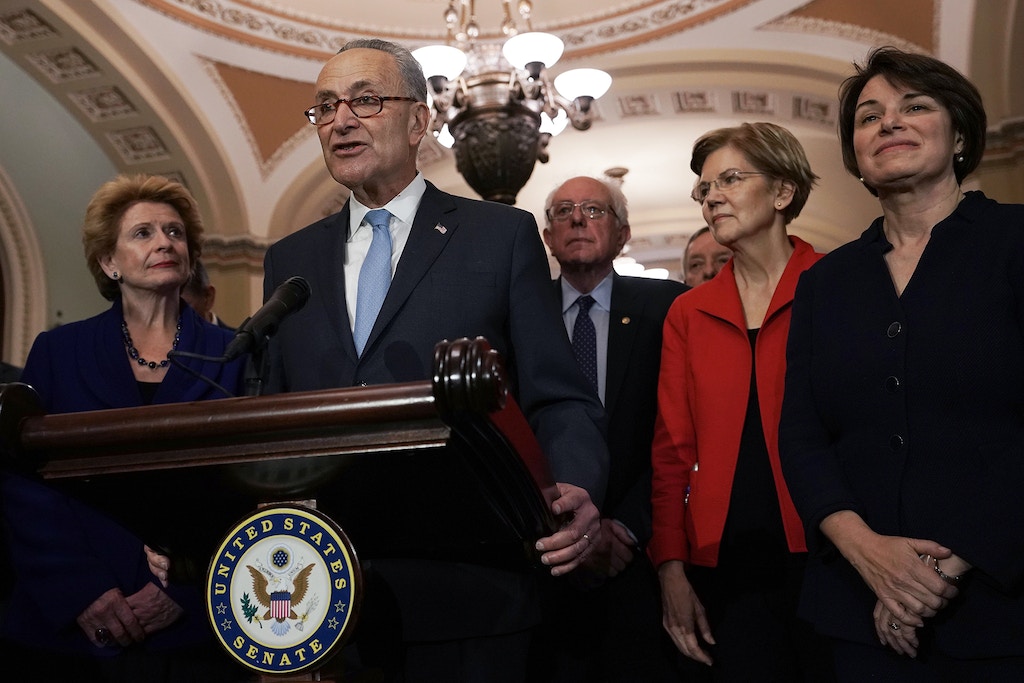 It wasn’t Donald Trump who said he opposed the nuclear deal with Iran because “we will be worse off with this agreement than without it,” while lying about the contents of that deal.

It wasn’t Mike Pence who said that “since the Palestinians in Gaza elected Hamas … to strangle them economically until they see that’s not the way to go makes sense.”

It wasn’t John Bolton who voted for the illegal invasion of Iraq in 2002, saying that Saddam Hussein was engaged in a “vigorous pursuit of biological, chemical, and nuclear weapons.”

It wasn’t Mike Pompeo who said, “It’s easy to sit back in the armchair and say that torture can never be used. But when you’re in the foxhole, it’s a very different deal.”

It wasn’t Stephen Miller who responded to the 2015 terrorist attacks in Paris by suggesting “a pause may be necessary” in the resettlement of Syrian refugees in the United States.

It wasn’t Betsy DeVos who joined a group of finance industry executives for breakfast only a few weeks after the 2008 financial crash and told them, “We are not going to be a bunch of crazy, anti-business liberals.”

Forget the hawks, blowhards, and kakistocrats of the Trump administration. You know who made all these statements? It was Chuck Schumer.

Yes, the fourth-term Democratic senator from New York has a long history of making really right-wing and rancid remarks. Yet on Wednesday morning, Schumer was re-elected as minority leader by acclamation in a closed-door meeting of Senate Democrats. They didn’t even bother to vote on it.

By Wednesday evening, though, the New York Times had published a blockbuster investigation into Facebook, which reminded us how Schumer, in the words of my colleague Glenn Greenwald, “has long been the embodiment of everything sleazy, legally corrupt, corporatist and craven in Washington.”

What did the Times say about the newly re-elected Senate minority leader?

In at least one instance, the company also relied on Mr. Schumer, the New York senator and Senate Democratic leader. He has long worked to advance Silicon Valley’s interests on issues such as commercial drone regulations and patent reform. During the 2016 election cycle, he raised more money from Facebook employees than any other member of Congress, according to the Center for Responsive Politics.

Mr. Schumer also has a personal connection to Facebook: His daughter Alison joined the firm out of college and is now a marketing manager in Facebook’s New York office, according to her LinkedIn profile.

In July, as Facebook’s troubles threatened to cost the company billions of dollars in market value, Mr. Schumer confronted [Sen. Mark] Warner, by then Facebook’s most insistent inquisitor in Congress.

To be clear: The leader of the Senate Democrats tried to bully a fellow Democratic senator to “back off” from investigating a company where his daughter works and which gives him more money than any other member of Congress. Why isn’t this a bigger story? How is this not a resigning issue?

Remember, there are, as of right now, 47 elected Senate Democrats. Almost any of them — with the glaring exception of the pretend-Democrat Joe Manchin of West Virginia — would do a better job of leading the party than Schumer.

As I argued earlier this week, the next two years in U.S. politics will be a 24/7 battle for the future of American democracy; a relentless fight against fascism, racism, and white nationalism. Are we really expected to believe that Schumer will be the leader of the #Resistance in the Senate ? Don’t make me laugh.

In January 2017, Trump nominated the hawkish Mike Pompeo, who has ties to a far-right network of Islamophobes, to serve as director of the CIA. Schumer’s response? He voted in favor of Pompeo.

In April 2017 and then again in April 2018, Trump launched airstrikes against the Assad regime in Syria. Schumer’s response? He backed both sets of strikes, calling the first “the right thing to do” and the second “appropriate.”

In February 2018, Trump signed off “on the biggest budget the Pentagon has ever seen: $700 billion.” Schumer’s response? “We fully support President Trump’s Defense Department’s request,” his office announced.

In August 2018, prior to the Supreme Court confirmation hearings, Trump nominated a bunch of new judges to fill vacancies in a number of federal district courts. Schumer’s response? As Vox reported, the Senate minority leader “reached an agreement late Tuesday with Senate Majority Leader Mitch McConnell to fast-track the confirmations of 15 Trump-nominated judicial picks.”

In October 2018, a Trump supporter sent a pipe bomb in the mail to George Soros, a billionaire donor to liberal causes. The California office of House Majority Leader Kevin McCarthy was vandalized a couple of days earlier. Schumer’s response to these incidents? He tweeted:

Make no mistake: Despicable acts of violence and harassment are being carried out by radicals across the political spectrum—not just by one side. Regardless of who is responsible, these acts are wrong and must be condemned by Democrats and Republicans alike. Period.

To be clear, property damage is not the moral equivalent of an assassination attempt. Trump supporters have carried out a long list of terrorist attacks — incited or inspired, on multiple occasions, by the president himself.

This isn’t resistance; this is collaboration. The Senate minority leader is a cautious and conservative politician who prefers to make deals, not noise. He avoids confrontation and likes to schmooze Republican friends while in the Senate gym. He is, to quote from the headline of a New York Times profile published a few months after the financial crash, a “champion of Wall Street.”

For the corrupt and lawless Trump, having his old friend Schumer — to whom he has donated thousands of dollars — in charge of the Senate Democrats is a blessing. Schumer is bent on negotiating with this president, whether over immigration reform or infrastructure. That Trump can’t be trusted, or that Trump is leading a white nationalist movement from the White House, doesn’t seem to bother him. As one of the young organizers of a November 2016 protest at the Senate office of the minority leader told the Village Voice: “What’s really dangerous about Chuck Schumer and the Democratic leadership is they don’t understand the stakes of what’s happening in this country.”

“Dangerous” is the correct word. Schumer has voted in favor of Trump cabinet appointees and Trump judicial appointees. He has downplayed the threat posed by the more deranged members of the Trump base by equating it to nonviolent protests from the left. And he refuses to talk impeachment.

So what happens if the president, in a desperate attempt to deflect from Special Counsel Robert Mueller’s final report or a future recession, decides to do something crazy? To start, say, a war with Iran? Do you think the senator from New York, who wrote a blank check for former President George W. Bush in 2002, is going to stand in Trump’s way?

Schumer may have since regretted his vote in favor of the Iraq invasion, but he has never disowned the warped thinking behind it. “Today,” he wrote in “Positively American,” his 2008 book, “I still believe that when our country is under attack the chief executive deserves a degree of latitude. If God forbid, we were attacked again, I could well vote to give it to a future president, Democrat or Republican.”

Deferential. Cowardly. Feckless. Craven. Corrupt. Complicit. Pick your own combination of words to describe Chuck Schumer. The biggest problem we all face is that the Democrats in the upper chamber of Congress have already picked theirs: “Senate minority leader.”