Alexandria Ocasio-Cortez is going toe to toe with North Shore Rep. Tom Suozzi, a New Democrat, for a seat on the powerful House Ways and Means Committee. 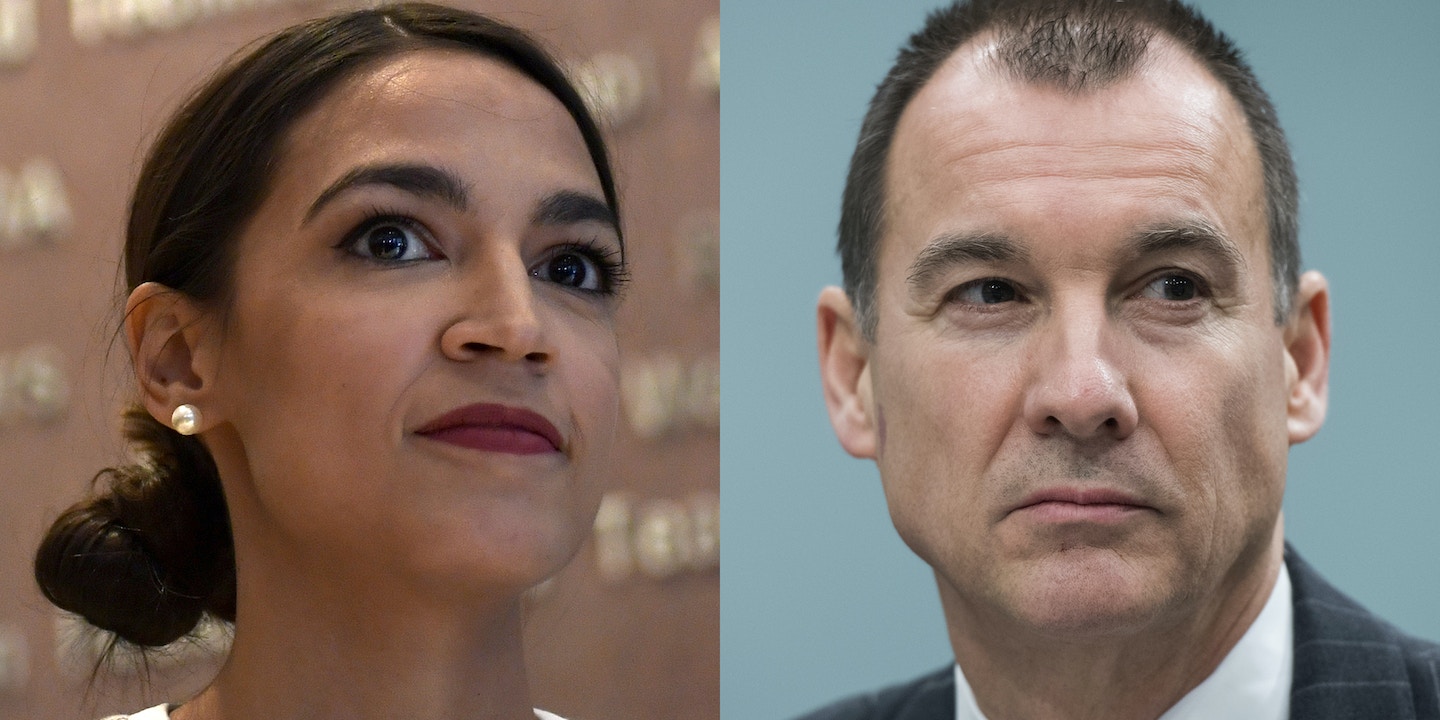 Alexandria Ocasio-Cortez is making a push for a seat on the powerful House Ways and Means Committee, according to people familiar with her decision. It’s a panel whose jurisdiction over taxes and revenue puts most of the economy within its mandate.

For that reason, freshmen are almost never given spots on the panel, but the midterm elections upset the balance of power in the House. Sixty-three new representatives have joined the Democratic caucus, and some 43 Republicans either lost their seats or retired — so there is an unusually large number of vacancies to fill.

By custom, New York City effectively has at least one reserved seat on Ways and Means, and Ocasio-Cortez is looking to claim it. Its former occupant was Rep. Joe Crowley, whom Ocasio-Cortez beat in a primary election.

Any major piece of legislation — whether it’s “Medicare for All,” a “Green New Deal,” or free public college — would involve some level of revenue, putting it squarely in the domain of Ways and Means, which makes it a key spot for a legislator looking to have an impact. Ocasio-Cortez is routinely asked how she plans to pay for her aggressive economic agenda, and the first answer begins with securing a spot on the House’s key tax-writing committee.

Traditionally, the seat is sought after for its fundraising potential, as every industry in the country is concerned with federal tax policy, meaning that members of the committee are more likely to get their fundraising calls returned. That makes the decision of who to give the seat to a tricky one for incoming House Speaker Nancy Pelosi, who has the final say on committee assignments. Placing a lawmaker who refuses corporate PAC contributions on the Ways and Means Committee could be seen by some elements of the party as leaving money on the table.

But giving it to the other New York applicant presents its own problems. Ocasio-Cortez is competing with Rep. Tom Suozzi, who represents the North Shore of Long Island, a district not far from Ocasio-Cortez’s Bronx and Queens — but a world away in terms of wealth and privilege. He would no doubt make efficient fundraising use of the seat, but he also took part in a recent assault on Pelosi’s power as speaker.

The contrast between how Ocasio-Cortez and Suozzi have approached the incoming Congress has been stark. Ocasio-Cortez began by joining a sit-in at Pelosi’s office to demand an empowered select committee to focus on legislating a Green New Deal. It was a risky move, but one that ended with Pelosi and Ocasio-Cortez praising one another, and the issue of climate change was elevated on the agenda. Ocasio-Cortez then threw her support behind an embattled Pelosi for speaker of the House.

Pelosi’s bid for speakership was threatened by the so-called Problem Solvers Caucus, a group of lawmakers funded by the dark-money group No Labels, which threatened to withhold voting for Pelosi unless she agreed to a suite of rule changes that would largely empower Republicans. Suozzi was one of the nine signatories on that letter. Pelosi ultimately ceded to some of their demands.

Suozzi is a vice chair of the Problem Solvers Caucus, as well as a member of the New Democrat Coalition, a bloc of Wall Street-friendly Democrats that dramatically expanded its membership with the 2018 elections.

Suozzi said that he had no interest in Ways and Means as a tool for fundraising, but argued that his training as a certified public accountant and attorney made him ideally suited for it. He also represents, he noted, a district that was hit very hard by the GOP tax bill, which tightened the state and local tax deduction. Because he represents part of Queens, he qualifies for the New York City spot.

“I’m not interested in this seat for fundraising purposes,” he told The Intercept, noting that he was first elected as mayor 25 years ago. “I don’t need a committee to raise money.”

Asked about the political contrast between him and Ocasio-Cortez, he acknowledged some differences, but said there was also common ground. “I’m very progressive on a lot of different issues, in support of the Green New Deal, immigration, both those issues, as well as on issues related to poverty,” he said. “Am I fiscally conservative? Yes, I’m fiscally conservative.”

Ocasio-Cortez’s decision to go after a spot on the Ways and Means Committee is part of a broader strategy to grow progressive power in the coming Congress. It began with Congressional Progressive Caucus leaders Mark Pocan of Wisconsin and Pramila Jayapal of Washington state extracting a major concession from Pelosi, that in exchange for CPC votes, she would give the caucus proportional representation — which amounts to 40 percent — on the most powerful committees, which includes Ways and Means.

Then, after Rep. Barbara Lee, D-Calif., narrowly lost her bid for caucus chair to Rep. Hakeem Jeffries, Pelosi named Lee the third co-chair of the Steering and Policy Committee. The steering committee decides on the remaining committee assignments, with Pelosi getting the final vote.

Outside progressive groups plan to mobilize on behalf of Ocasio-Cortez’s effort. Jennifer Epps-Addison, network president and co-executive director of the Center for Popular Democracy Action, argued that putting her on the committee would bring a valuable new perspective because she “rejects the false scarcity that pits health care against education, jobs against addressing climate change, while spending limitlessly on war and criminalization.”

“Not only does she have the lived experience of Americans struggling to make ends meet in this rigged economy, but she will make sure to bring our voices and concerns to one of the most important decision-making bodies in Congress,” Epps-Addison said. “We strongly support her over Tom Suozzi, who was willing to withhold support for Pelosi to fuel his centrist agenda.”

After publication, a number of progressive organizations emailed statement of support for Ocasio-Cortez’s bid for Ways and Means, and in opposition to Suozzi, a rare display of outside intervention in the committee selection process.

“Democrats in Washington need to learn the lessons from this election and fast. Voters voted for change. Voters voted for bold and progressive leadership, not politicians beholden to the big banks and Wall Street. And they voted to put women of color in positions of power and leadership. Of course Alexandria Ocasio-Cortez should be on Ways and Means and not another Wall Street politician using large corporate donations to masquerade as a so-called ‘problem solver.’”

“Alexandria Ocasio Cortez is a powerful voices for the millions of Americans who want to see solutions from our leaders like the Green New Deal — ones that meet the scale of the crises we’re facing. That voice deserves a seat at the table on Ways and Means. Suozzi has shown he is the wrong choice by his record. He voted to roll back Wall Street reform and allow lenders to charge higher interest to people of color, joined the corporate-friendly New Democratic caucus and sought to make it easier for Republicans to bring legislation to the floor in the name of ‘solving’ a non-existent ‘problem.’”

“We can’t trust Wall Street-backed candidates like Suozzi to set up tax structures that benefit the ordinary Americans, or to defend and expand Social Security. These are critical elements of Ways and Means’s jurisdiction, and appointing people like him belies the promise of the “Better Deal” and Democrats conceit that they stand for the interests of people, not corporations. Rather, we need AOC and people like her placed on Ways and Means to ensure that it works in the best interests of all of us.”

“Democrats won the House by running on lowering drug prices and expanding Medicare. Now, the party’s leaders must match their campaign rhetoric with action by putting progressive champions on Ways and Means. Corporate Democrats must not be allowed to give Wall Street and Pharma veto power over what comes out of these critical committees.”