John Kelly Was a Bully, Bigot, and Liar for Trump. Goodbye and Good Riddance.

The departing White House chief of staff was Trump’s nasty and brutish mini-me. He was never the “adult in the room.” 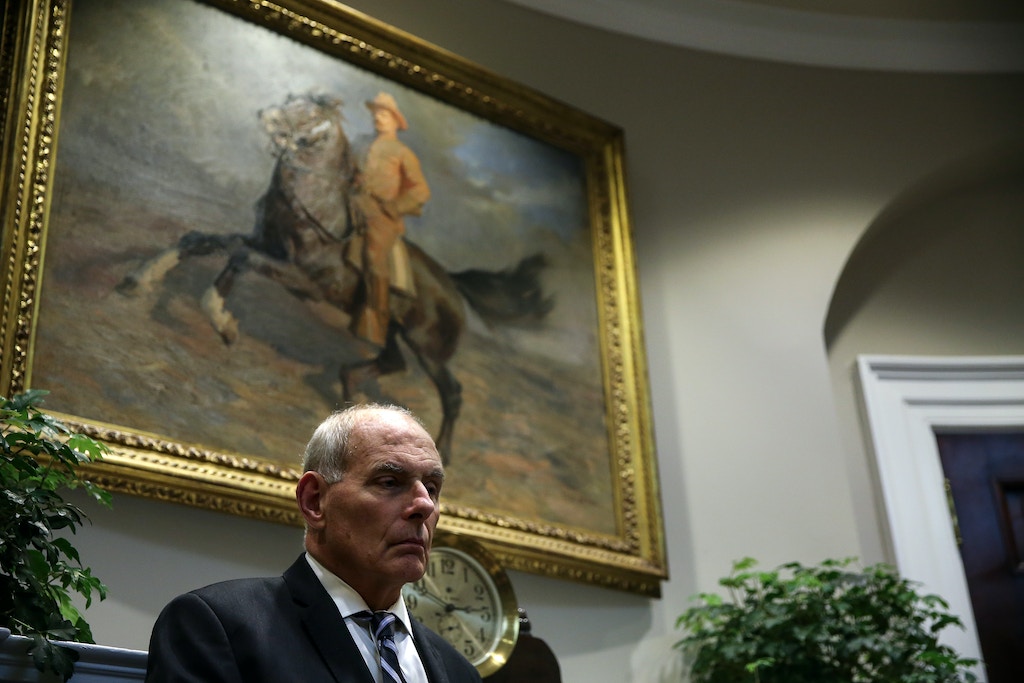 White House Chief of Staff John Kelly listens as President Donald Trump speaks during the inaugural meeting of the President’s National Council for the American Worker at the White House on Sept. 17, 2018.

The president’s chief of staff is heading for the White House exit. “John Kelly will be leaving,” Donald Trump confirmed to reporters on Saturday. “I don’t know if I can say ‘retiring,’ but he’s a great guy.”

This “great guy” will leave behind an administration mired in scandal, chaos, and corruption; a president perhaps even more reckless and lawless today than he was when Kelly arrived for work at the West Wing on the morning of July 31, 2017.

That was a period in which political pundits and correspondents also believed the retired four-star general to be a “great guy.” Remember how his appointment, as replacement for the hapless Republican operative Reince Preibus, was greeted by the liberal press? Kelly, we were told, would be the “adult in the room”; he would rein in a brash and belligerent commander-in-chief.

The New York Times called the former Marine commander a “beacon of discipline” who would be “unafraid to challenge” the president. The Washington Post said he would “bring some plain-spoken discipline to an often chaotic West Wing.” Axios listed him as a key member of the “Committee to Save America.” Then there was my favorite headline, from Bloomberg News, on August 6, 2017: “New Chief of Staff Kelly Moves Quickly to Tame Trump’s Tweets.” (How did that work out?)

It was all a bunch of nonsense from lazy reporters and commentators who should have known better. Kelly, lest we forget, arrived at the White House from the Department of Homeland Security, where he had quickly and proudly built a reputation “as one of the most aggressive enforcers of immigration law in recent American history,” to quote from a scathing evaluation of his six-month tenure in charge of DHS by the New Yorker’s Jonathan Blitzer. On Kelly’s watch, wrote Blitzer, “immigration arrests in the U.S. increased by forty per cent and DHS became one of the few branches of the federal government that has been both willing and able to execute Trump’s policy priorities.”

In March 2017, while defending Trump’s “Muslim ban,” Kelly had threatened to walk out of a meeting with Arab-American and Latino groups in Michigan. In April 2017, in a speech in Washington, D.C., the DHS secretary had told members of Congress to either change the country’s immigration laws or “shut up and support the men and women on the front lines.” In May 2017, at a Coast Guard ceremony, the retired general was caught on a hot mic telling Trump, who was holding a ceremonial sword, that he should “use that on the press, sir.”

So why did anyone with functioning eyes or ears assume that Kelly would do anything different at the White House? Why did political and media elites pretend that he would be a sober and moderate figure, a check or restraint on the president, rather than Trump’s nasty and brutish mini-me?

How else are we supposed to describe his gaffe-laden, controversy-filled 17 months in charge? This was a chief of staff who told Fox News that “the lack of the ability to compromise led to the Civil War,” while praising the pro-slavery Confederate Gen. Robert E. Lee as an “honorable man”; who protected and promoted White House staff secretary Rob Porter — a man accused of domestic abuse by both of his ex-wives — and described him as a man of “true integrity and honor, and I can’t say enough good things about him”; who repeatedly misled the press about what he knew about Porter and when he knew it, which led to one of his White House colleagues calling him a “big fat liar”; who claimed that the “vast majority” of undocumented immigrants “don’t integrate well” and “don’t have skills”; who described immigrants who were eligible for DACA but had failed to apply for it as “too lazy to get off their asses”; who said that he wanted to reduce the number of refugees admitted into the United States to “between zero and one”; who defended the separation of migrant children from their parents on the grounds that the kids would be “put into foster care or whatever” and bragged that the “big name of the game is deterrence”; who signed a “Cabinet order” authorizing the (potentially illegal) use of lethal force by troops at the border; who lamented that women were no longer treated as “sacred and looked upon with great honor” but who was also accused of suggesting that women were more emotional than men; who breached security protocols by firing White House aide Omarosa Manigault in the Situation Room and threatening her in the process; who boasted to Manigault on a secret recording that everyone in the White House “works for me and not the president”; who made a series of false accusations against black member of Congress, Frederica Wilson, and then swore that he would “never apologize” for lying about her; and who shamelessly allowed Trump to use his dead son to attack former President Barack Obama.

Yes, he was quoted calling the president “an idiot” multiple times, according to NBC News; yes, he was quoted by journalist Bob Woodward describing the Trump White House as “Crazytown”; yes, he publicly undermined the president by suggesting that Trump had “evolved” on the issue of a border wall (spoiler alert: Trump hadn’t). So, yes, not unsurprisingly, all of this annoyed and upset Kelly’s thin-skinned master in the Oval Office, who — with the encouragement of his daughter  — finally gave the retired general the big heave-ho over the weekend.

But let’s be clear: Kelly was never a “great guy”; never the “adult in the room.” He was a bully, a bigot, and a liar; as racist and reactionary as his soon-to-be former boss. He was an enabler of Trump’s worst crimes and abuses — from the “unconstitutional” appointment of his crony Matthew Whitaker as acting attorney general, to the abduction of children at the U.S.-Mexico border, to the fake furor over the migrant “caravan.”

The truth is that this once-distinguished military man should never have been appointed to the top political job in the White House — and deserves to have been fired from it long ago.