A new generation of Democrats is being instilled with formerly right-wing Cold Warrior values and reverence for security state agencies.

A veteran national security journalist with NBC News and MSNBC blasted the networks in a Monday email for becoming captive and subservient to the national security state, reflexively pro-war in the name of stopping President Donald Trump, and now the prime propaganda instrument of the War Machine’s promotion of militarism and imperialism. As a result of NBC/MSNBC’s all-consuming militarism, he said, “the national security establishment not only hasn’t missed a beat but indeed has gained dangerous strength” and “is ever more autonomous and practically impervious to criticism.”

The NBC/MSNBC reporter, William Arkin, is a longtime prominent war and military reporter, perhaps best known for his groundbreaking, three-part Washington Post series in 2010, co-reported with two-time Pulitzer winner Dana Priest, on how sprawling, unaccountable, and omnipotent the national security state has become in the post-9/11 era. When that three-part investigative series, titled “Top Secret America,” was published, I hailed it as one of the most important pieces of reporting of the war on terror, because while “we chirp endlessly about the Congress, the White House, the Supreme Court, the Democrats and Republicans, this is the Real U.S. Government:  functioning in total darkness, beyond elections and parties, so secret, vast and powerful that it evades the control or knowledge of any one person or even any organization.” Arkin has worked with NBC and MSNBC over the years and continuously since 2016. But yesterday, he announced that he was leaving the network in a long, emphatic email denouncing the networks for their superficial and reactionary coverage of national security, for becoming fixated on trivial Trump outbursts of the day to chase profit and ratings, and — most incriminating of all — for becoming the central propaganda arm of the CIA, the Pentagon, and the FBI in the name of #Resistance, thus inculcating an entire new generation of liberals, paying attention to politics for the first time in the Trump era, to “lionize” those agencies and their policies of imperialism and militarism.

That MSNBC and NBC have become Security State Central has been obvious for quite some time. The network consists of little more than former CIA, NSA, and Pentagon officials as news “analysts”; ex-Bush-Cheney national security and communications officials as hosts and commentators; and the most extremists pro-war neocons constantly bashing Trump (and critics of Democrats generally) from the right, using the Cheney-Rove playbook on which they built their careers to accuse Democratic Party critics and enemies of being insufficiently patriotic, traitors for America’s official enemies, and abandoning America’s hegemonic role in the world. 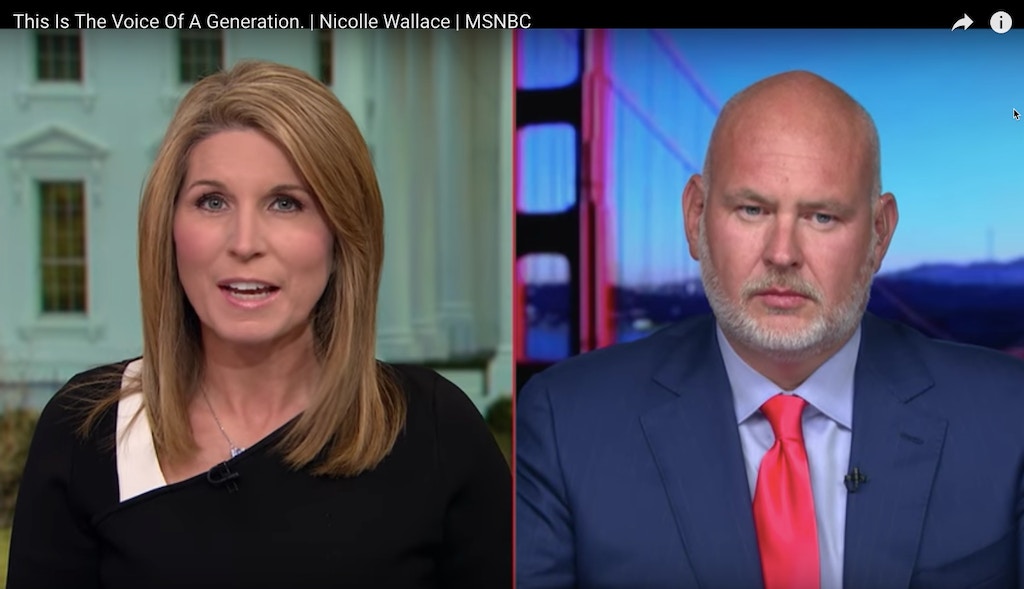 MSNBC’s star national security reporter Ken Dilanian was widely mocked by media outlets for years for being an uncritical CIA stenographer before he became a beloved NBC/MSNBC reporter (where his mindless servitude to his CIA masters has produced some of the network’s most humiliating debacles). The cable network’s key anchor, Rachel Maddow, once wrote a book on the evils of endless wars without congressional authorization, but now routinely depicts anyone who wants to end those illegal wars as reckless weaklings and traitors. Some of the most beloved and frequently featured MSNBC commentators are the most bloodthirsty pro-war militarists from the war on terror: David Frum, Jennifer Rubin, Ralph Peters, and Bill Kristol (who was just giddily and affectionately celebrated with a playful nickname bestowed on him: “Lil Bill”). In early 2018, NBC hired former CIA chief John Brennan to serve as a “senior national security and intelligence analyst,” where the rendition and torture advocate joined — as Politico’s Jack Shafer noted — a long litany of former security state officials at the network, including “Chuck Rosenberg, former acting DEA administrator, chief of staff for FBI Director James B. Comey, and counselor to former FBI Director Robert S. Mueller III; Frank Figliuzzi, former chief of FBI counterintelligence; Juan Zarate, deputy national security adviser under Bush.”

As Shafer noted, filling your news and analyst slots with former security state officials as MSNBC and NBC have done is tantamount to becoming state TV, since “their first loyalty — and this is no slam — is to the agency from which they hail.” As he put it: “Imagine a TV network covering the auto industry through the eyes of dozens of paid former auto executives and you begin to appreciate the current peculiarities.”

All of this led Arkin to publish a remarkable denunciation of NBC and MSNBC in the form of an email he sent to various outlets, including The Intercept. Its key passages are scathing and unflinching in their depiction of those networks as pro-war propaganda outlets that exist to do little more than amplify and serve the security state agencies most devoted to opposing Trump, including their mindless opposition to Trump’s attempts (with whatever motives) to roll back some of the excesses of imperialism, aggression, and U.S. involvement in endless war, as well as to sacrifice all journalistic standards and skepticism about generals and the U.S war machine if doing so advances their monomaniacal mission of denouncing Trump. As Arkin wrote (emphasis added):

My expertise, though seeming to be all the more central to the challenges and dangers we face, also seems to be less valued at the moment. And I find myself completely out of synch with the network, being neither a day-to-day reporter nor interested in the Trump circus. …

To me there is also a larger problem: though they produce nothing that resembles actual safety and security, the national security leaders and generals we have are allowed to do their thing unmolested. Despite being at “war,” no great wartime leaders or visionaries are emerging. There is not a soul in Washington who can say that they have won or stopped any conflict. And though there might be the beloved perfumed princes in the form of the Petraeus’ and Wes Clarks’, or the so-called warrior monks like Mattis and McMaster, we’ve had more than a generation of national security leaders who sadly and fraudulently have done little of consequence. And yet we (and others) embrace them, even the highly partisan formers who masquerade as “analysts”. We do so ignoring the empirical truth of what they have wrought: There is not one county in the Middle East that is safer today than it was 18 years ago. Indeed the world becomes ever more polarized and dangerous. …

Windrem again convinced me to return to NBC to join the new investigative unit in the early days of the 2016 presidential campaign. I thought that the mission was to break through the machine of perpetual war acceptance and conventional wisdom to challenge Hillary Clinton’s hawkishness. It was also an interesting moment at NBC because everyone was looking over their shoulder at Vice and other upstarts creeping up on the mainstream. But then Trump got elected and Investigations got sucked into the tweeting vortex, increasingly lost in a directionless adrenaline rush, the national security and political version of leading the broadcast with every snow storm. And I would assert that in many ways NBC just began emulating the national security state itself – busy and profitable. No wars won but the ball is kept in play.

I’d argue that under Trump, the national security establishment not only hasn’t missed a beat but indeed has gained dangerous strength. Now it is ever more autonomous and practically impervious to criticism. I’d also argue, ever so gingerly, that NBC has become somewhat lost in its own verve, proxies of boring moderation and conventional wisdom, defender of the government against Trump, cheerleader for open and subtle threat mongering, in love with procedure and protocol over all else (including results). I accept that there’s a lot to report here, but I’m more worried about how much we are missing. Hence my desire to take a step back and think why so little changes with regard to America’s wars. …

In our day-to-day whirlwind and hostage status as prisoners of Donald Trump, I think – like everyone else does – that we miss so much. People who don’t understand the medium, or the pressures, loudly opine that it’s corporate control or even worse, that it’s partisan. Sometimes I quip in response to friends on the outside (and to government sources) that if they mean by the word partisan that it is New Yorkers and Washingtonians against the rest of the country then they are right.

For me I realized how out of step I was when I looked at Trump’s various bumbling intuitions: his desire to improve relations with Russia, to denuclearize North Korea, to get out of the Middle East, to question why we are fighting in Africa, even in his attacks on the intelligence community and the FBI.  Of course he is an ignorant and incompetent impostor. And yet I’m alarmed at how quick NBC is to mechanically argue the contrary, to be in favor of policies that just spell more conflict and more war. Really? We shouldn’t get out Syria? We shouldn’t go for the bold move of denuclearizing the Korean peninsula?  Even on Russia, though we should be concerned about the brittleness of our democracy that it is so vulnerable to manipulation, do we really yearn for the Cold War? And don’t even get me started with the FBI: What? We now lionize this historically destructive institution?

That an entire generation of Democrats paying attention to politics for the first time is being instilled with formerly right-wing Cold Warrior values of jingoism, über-patriotism, reverence for security state agencies and prosecutors, a reckless use of the “traitor” accusation to smear one’s enemies, and a belief that neoconservatives embody moral rectitude and foreign policy expertise has long been obvious and deeply disturbing. These toxins will endure far beyond Trump, particularly given the now full-scale unity between the Democratic establishment and neocons.

I think the way it's supposed to work is the elected president, as Commander-in-Chief, makes decisions with Congress about whether troops will be deployed (which didn't happen in Syria), & then the President decides when they come home. We have civilian, not military, rule: https://t.co/5GJ2J5jjUE

Still, that a network insider has blown the whistle on how all this works, and how MSNBC and NBC have become ground zero for these political pathologies of militarism and servitude to security state agencies, while not surprising, is nonetheless momentous given how detailed and emphatic he is in his condemnations.